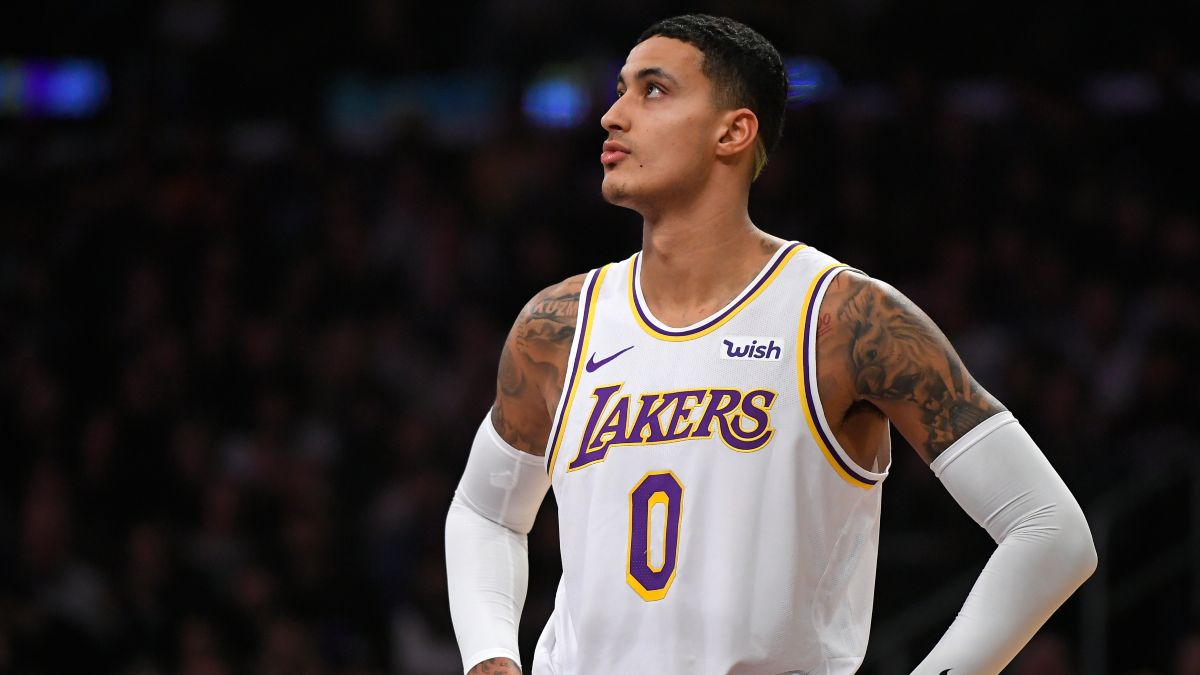 After a surprisingly good rookie year during the 2017-18 season, Kyle Kuzma was heralded as a future cornerstone for the Los Angeles Lakers. Along with draft batchmate Lonzo Ball, Josh Hart and all-around swingman Brandon Ingram, Kuzma became a fan favourite among Lakers fans. The 6-foot-9 combo forward upped his scoring average to 18.7 points during his sophomore year, but has drastically regressed this season. With the arrival of perennial superstar Anthony Davis, Kuzma lost his starting spot in the rotation. His scoring has dipped to only 11.8 points per contest, while his field goal attempts went down from 15.5 last season to only 10.2 shots this year.

This downward trend for Kuzma has led to speculations that the Lakers will soon find a new home for him. Sam Amick of The Athletic recently confirmed those rumors, reporting that the Lakers front office are indeed taking the calls from other teams to listen to their potential offers.

“As our Shams Charania reported Friday, teams are monitoring his situation and wondering whether he can be had before the Feb. 6 trade deadline. What’s more,  sources now say the Lakers have shown a recent willingness to listen to pitches for Kuzma.

And … we’re off — sort of. From the Lakers’ perspective, this open-phone-lines approach is merely a case of Pelinka doing due diligence as opposed to having substantive discussions. If only because nothing of real interest has come their way — yet.”

Kuzma, 24, is coming off a productive summer with the Team USA. Despite sustaining an ankle injury that forced him to withdraw from a roster spot in the squad, the learnings and experience he gained under champion head coach Gregg Popovich should bode well for his development. A capable scorer who is more comfortable in taking advantage of off-ball opportunities, Kuzma’s inside-outside offensive skill set should be an asset for any team.

While Amick also wrote that the ever-influential LeBron James remains very supportive of Kuzma’s place in the line-up, multiple reports have surfaced regarding the young star’s possible destinations if traded. Marc Stein of The New York Times reported that the Sacramento Kings have already reached out to the Lakers to gauge their level of interest in shipping Kuzma.

“Sacramento is among the teams that has tried to engage the Lakers in Kyle Kuzma trade talks, league sources say. The Kings know they would have to include sharpshooter (and soon-to-be restricted free agent) Bogdan Bogdanovic, for starters, in a Kuzma deal.”

Furthermore, the Lakers are also rumoured to be observing the Minnesota Timberwolves’ stance on keeping excellent 3-and-D swingman Robert Covington. The 29-year old veteran gunner is norming averages of 12.4 points, 5.8 rebounds and 1.6 steals per contest, while shooting a decent 34% clip from the three-point line. Covington has long been part of trade rumors even before the season began, and he figures to be a valuable trade asset for Minnesota. Bobby Marks of ESPN was the first to report about the possibility of the Lakers swapping Kuzma for the services of Covington.

“The Los Angeles Lakers may reportedly try to build a blockbuster offer surrounding forward Kyle Kuzma in an effort to acquire Minnesota Timberwolves forward Robert Covington ahead of the Feb. 6 NBA trade deadline.”

Marks would also put it out that the Lakers could include recently-acquired players like Quinn Cook and DeMarcus Cousins to match the salary of Covington. Cook, who already won a championship with the Golden State Warriors during his rookie year, has not earned a consistent role in head coach Frank Vogel’s rotation. Point guards Rajon Rondo and Alex Caruso are ahead of him in the rotation, forcing him to only watch from the bench. While Cousins has been doing light drills in his recovery from the Torn ACL injury he unfortunately sustained in the offseason, it will be very tough for the Lakers to integrate him in the line-up when he becomes fully-healthy. JaVale McGee and Dwight Howard are proving to be very effective in their roles, leaving little to no chance for Cousins to have a spot in the rotation.

However, Marks also says that the Wolves front office are not in a rush to get rid of Covington. They have little to lose this season, and it will be wise for them to see how their current players will perform under their system.

“My sense from talking to teams is that Minnesota could create a bidding war leading up to the deadline. I believe what L.A. has to offer would fall short of the demands from the Timberwolves (or for a player such as Bogdan Bogdanovic from the Kings). That’s unless they can entice a third team to take Kuzma, with the Wolves receiving something of more value to them, perhaps a starting point guard. Gersson Rosas, the new head of basketball operations in Minnesota, is using this season to audit his roster and can wait until the offseason to address its needs.”

As for the possibility of nabbing Bogdanovic in a deal with the Kings, the Lakers are indeed taking a risky move here. The young budding Serbian star will enter restricted free agency in 2020, and the Lakers have no chance of offering him an extension unless they are willing to let go some of their quality role players this season. With LeBron entering age 36 next season, roster depth will become more valuable for his team.

On top of that, the Kings are not desperate on shipping Bogdanovic before the February trade deadline. They have offered a four-year extension to the sweet-shooting swingman in the offseason, but Bogdanovic did not accept it in hopes of signing a much bigger contract when he becomes a restricted free agent next summer. Jason Jones of The Athletic even went on to say that it will take a “crazy” offer for the Kings to consider letting go of their rising star through a trade this season.

“Now, Hield has already signed a contract extension and Bogdanovic is set to become  a restricted free agent, having not signed the Kings’ offer for an extension. Though Bogdanovic’s name has come up in trade chatter lately, the Kings aren’t looking to move him, according to league sources.

A source said it would take a “crazy” offer for the Kings to consider moving    Bogdanovic, who’s valued for his shooting and playmaking.”

The 6-foot-6 gunner is norming averages of 14.5 points, 3.0 boards and 3.6 dimes per game this season. He has embraced the Sixth Man role for the Kings, while shooting an excellent 38% clip from beyond the arc.

The Portland Trail Blazers have been one of the most disappointing teams in the league this season. After a compelling Western Conference Finals run last postseason, the Blazers have dipped in terms of team success this year. They are only sporting a 15-22 record, only good for the 10th spot in the conference.

Despite their struggles, the Blazers front office are not keen on shipping either of their two backcourt stars. Recent rumors surfaced on social media about an apparent ESPN’s Adrian Wojnarowski’s report on trade speculations around Blazers shooting guard CJ McCollum. The rumors point out that the Boston Celtics, the Miami Heat, the Milwaukee Bucks and the Philadelphia 76ers have been gauging the interest of the Blazers in trading away their star combo guard.

However, it turns out that Wojnarowski never said that statement and the rumors are pure hoax. Dwight Jaynes of the NBC Sports Northwest even pointed out that the Blazers front office have never shown any interest in moving McCollum.

“CJ cannot be dealt until Jan, 30 and it’s very doubtful Portland would want to take on that contract of Horford. And there has NEVER been any indication Blazers would trade CJ. OK?”

McCollum is posting an excellent stat line of 22.3 points, 4.3 rebounds and 3.8 assists per game this season. After an outstanding break-out playoff performance in 2019, there were expectations that McCollum will finally become an elite All-Star caliber player this year. But the 27-year old star hasn’t seen any major improvements in his production, arguably the main reason why these trade rumors are propping up around his name.

Still, the Blazers are a major piece away from serious contention. Carmelo Anthony, their recent acquisition, has been doing wonders for them in the offensive end. It’s mind-boggling why the team hasn’t been racking up wins this season, especially with Damian Lillard producing career-high numbers in points and assists.