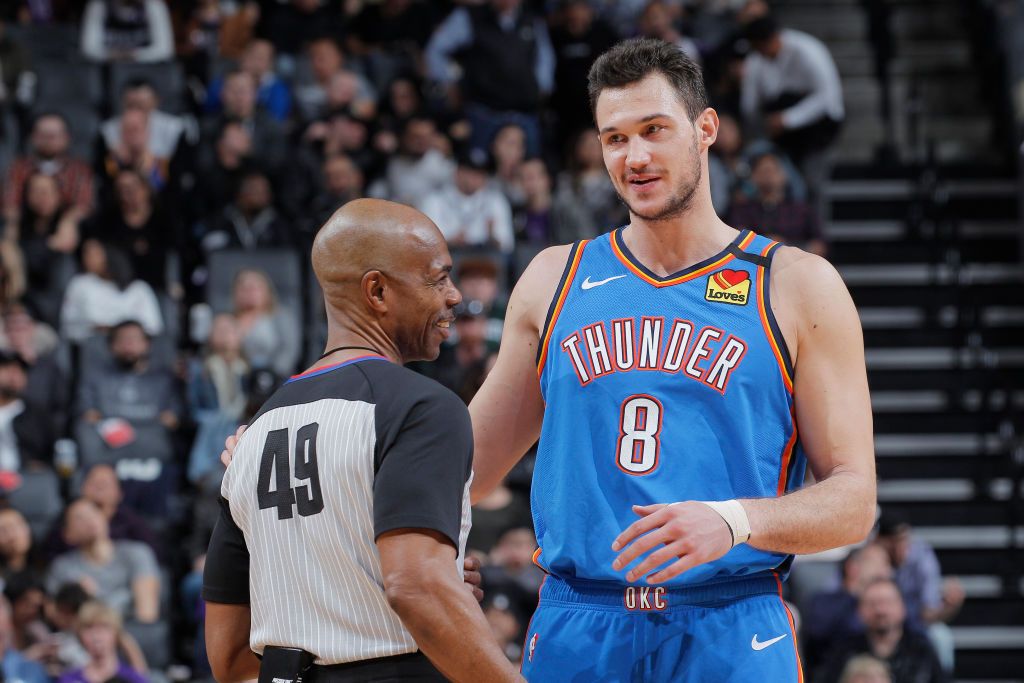 The Oklahoma City Thunder has been one of the most surprisingly good teams in the NBA this season. Expected by many to spiral downward after shipping their long-tenured superstar Russell Westbrook and trading star forward Paul George, the Thunder has indeed overcome the odds. They are now sporting a 40-24 record, claiming the 5th spot in the stacked Western Conference.

With a balanced offensive effort from a number of contributors in the team, the Thunder has been a pleasure to watch this season. One of those key contributors is stretch forward Danilo Gallinari. The 31-year old sweet-shooting combo forward is second in the team in scoring with 19.2 markers per contest, while also producing a team-best 41% clip from the three-point line.

His consistent production was the reason why a number of teams tried to acquire him before the February trade deadline. Shams Charania of The Athletic reported that Gallinari gained the interest of the Miami Heat and the Dallas Mavericks. However, nothing concrete materialized out of the trade talks, and the Italian sensation is still with the Thunder.

In an appearance for the Daily Thunder Podcast, Gallinari revealed that it was a relief that he was not traded from the Thunder. The 6-foot-10 gunner emphasized that the team’s winning culture will be very hard to leave.

True enough, the Thunder organization has made the most of the opportunity to retool their roster following the departure of Westbrook and George. They have veered away from a superstar-centric approach to their offensive sets. With the arrival of a brilliant veteran point guard in Chris Paul, the Thunder has been playing a balanced team basketball on both ends of the floor.

In fact, not a single name on OKC’s roster has eclipsed the 20-point average this season. Young budding guard Shai Gilgeous-Alexander, who the Thunder received via the George trade, is leading them in the scoring column with 19.3 markers. But with excellent ball handlers like Paul and Dennis Schroder, the Thunder is very efficient in their sets, indicated by the fact that they are ranked 5thin field goal percentage.

Going back to Gallinari, scoring has always been there for him. While he is still chasing the coveted championship trophy, he has played on a number of contending teams like the post-Carmelo Anthony Denver Nuggets and the Doc Rivers-led Los Angeles Clippers. Rivers have seen how Gallinari has torched opponents as he coached him in the past couple of years.

In an interview with Maddie Lee of The Oklahoman, Rivers emphasized how Gallinari puts up consistent numbers across the board and how his versatility on offense has helped the case of each of the teams that he played for.

“It’s funny, everywhere he goes he just keeps playing, keeps scoring. Then when you read about the teams, you rarely see a Gallinari comment. He gets away with 20 (points) and nobody talks about it. I don’t know how he does it. He’s a quiet assassin.

He can do everything,” Rivers said when asked for his scouting report of Gallinari back in November. “He can pass the ball, but most of all, he draws fouls. He’s a great 3-point shooter. You tell them all that, really. And then tell them good luck, you’ve got to stop him.”

Rivers’ assessment of Gallinari is on-point. Despite his 6-foot-10 frame, Gallinari packs in his unique arsenal some excellent guard skills. He can effectively put the ball on the floor for a strong finish to the rim and spot up or move through screens to launch a three-pointer. To make matters worse for his opponents, Gallo can also back down his defender and make a turnaround fade-away jumper.

Even a future Hall of Famer like Paul is still swamped on how to effectively defend Gallinari. By the time that Gallo arrived at the Clippers lore, Paul was already in Houston playing for the Rockets. It is only this season that they paired up, and the 34-year old playmaking maestro bared how difficult it is to read Gallinari’s offense.

“We know what a guy averages going into a game, but he averages that for a reason. Because everybody else had the scouting report, too, and you can’t necessarily stop it. So, I think a lot of times the scouting report on Gallo is to not let him get open looks, try to be tough on him in the post. But many people have tried, and not a lot are successful.”

While being relieved that he was not traded away before the deadline, Gallinari even went on to hint that he plans on re-signing with the Thunder this offseason. At 31, Gallo still has a lot left in the tank and could garner a hefty multi-year deal with any team.

With recent reports circulating about DeMar DeRozan’s unhappy state in San Antonio, it’s highly anticipated that he will decline his player option and enter unrestricted free agency this offseason. Chris Haynes of Yahoo Sports recently reported that the former All-Star swingman is set to opt out if he and the Spurs fail to manufacture a contract extension after this season.

But a contract extension will be something that the Spurs front office will really take a hard, long look on. In an sit-down with ESPN San Antonio, Jabari Young of CNBC Sports Business emphasized that the losing has forced many people within the Spurs organization to think their partnership with DeRozan will still work.

"I don't have to sugarcoat anything. DeMar DeRozan is not happy in San Antonio.

The offense is not running as smoothly as one would think with a guy like him in the lineup. So you have to decide if you want to take that money and if you want to come back to a situation that's just not suitable. I mean, it didn't work. They're not winning, they don't look like they enjoy playing with each other, the roster just doesn't fit."

Indeed, the Spurs are about to miss out on a playoff berth for the first time since the 1996-97 season. The storied franchise’s consistent team success is a source of pride for the organization, but their performance has dipped since last season. With the departure and retirement of their famed Big 3 of Tim Duncan, Manu Ginobili and Tony Parker, the Spurs have entered a new territory. By shipping the disgruntled Kawhi Leonard to Toronto, their retooled roster headed by DeRozan, LaMarcus Aldridge and a bunch of good yet unproven guards was put to the test.

However, that squad barely made it to the playoffs, although they pushed Nikola Jokic and the Denver Nuggets to a Game Seven decider. After bowing out of the first round of the playoffs, several trade rumors circulated on their two stars. One of the teams interested in trading for Aldridge or DeRozan is the Miami Heat.

Even before the regular season began, Pat Riley and the Heat front office already made it known that they will be placing another star alongside newly-acquired superstar Jimmy Butler. That did not happen, although Bam Adebayo’s emergence to an All-Star appearance filled in for that void.

But the Heat has not pulled back from their pursuit of DeRozan, at least according to Young’s report.

“During the trade deadline, I was hearing Miami was making a push for DeMar DeRozan. He’s close to Jimmy Butler. Would that be a fit?”

It is indeed an intriguing scenario, but the Heat has been hesitant to part with their current young core. They have high hopes for the growth of young guns Tyler Herro, Kendrick Nunn, Duncan Robinson and Adebayo. But if DeRozan becomes a free agent and agrees to a bargain deal, Riley can still work his usual magic and wonders in acquiring the four-time All-Star.