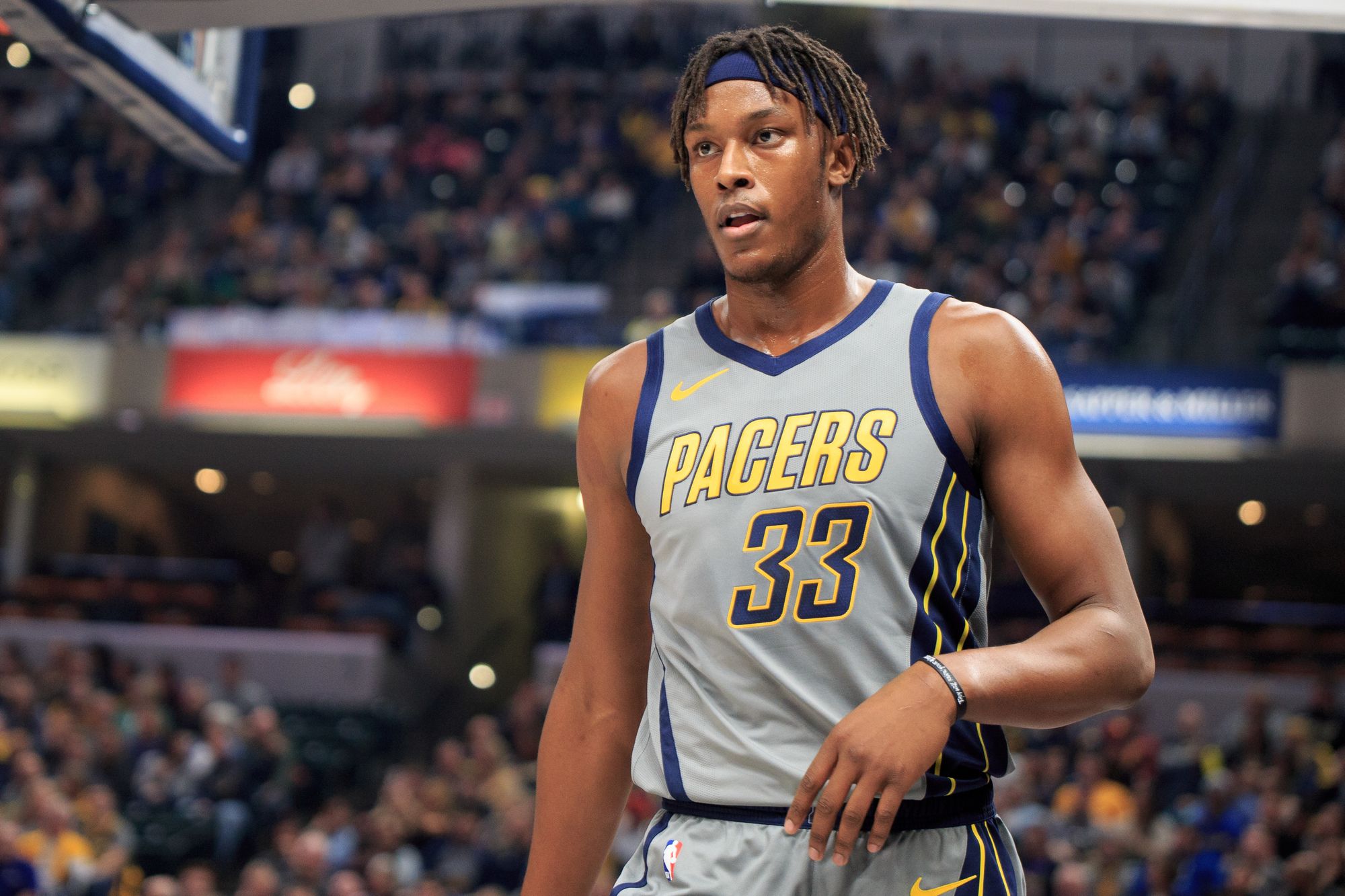 The Milwaukee Bucks are doing everything to convince Giannis Antetokounmpo to sign a super-maximum contract that would secure his future in Cream City. The Bucks took a big step forward earlier in the offseason when they traded for All-Star guard Jrue Holiday. Milwaukee was also on the verge of acquiring Bogdan Bogdanovic from the Sacramento Kings, but the deal eventually fell apart.

Antetokounmpo could become a free agent after the 2020-21 NBA season if he does not sign the extension before the deadline on December 21. The Bucks still have a full season to convince the reigning NBA Most Valuable Player to remain in Milwaukee. Yet, most experts believe that they should act swiftly. According to Greg Swartz of Bleacher Report, the Bucks should strongly consider trading for Indiana Pacers center Myles Turner.

In his proposed deal, the Bucks would send Donte DiVincenzo and Brook Lopez to the Pacers in exchange for Turner and two second-round picks. Swartz said that the deal makes a lot of sense for Milwaukee despite Lopez being a good fit with Antetokounmpo. He pointed out that, like Lopez, Turner can also space the floor for Antetokounmpo but is much young and could grow alongside the Greek superstar.

"While Lopez has been a successful complement to Giannis Antetokounmpo in the  Bucks frontcourt, the 32-year-old's three-point percentage fell to 31.4 this past season," Swartz said. "Swapping Turner in for Lopez should have Antetokounmpo far more excited about Milwaukee's future as the 24-year-old connected on 34.4 percent of  his threes in the regular season and 42.9 percent in the playoffs last year. He's also  making a reasonable $18 million per season for the next three years and would give Antetokounmpo a young shot-blocker to develop alongside."

Turner started in all 62 games for the Pacers last season, where he averaged 12.1 points and 6.6 rebounds per game. It was a regression for the fifth-year center, who averaged 13.3 points and 7.2 rebounds in 74 games during the 2018-19 NBA season. A change of scenery could work wonders for the 24-year-old, especially in a team with Milwaukee where most of the defensive attention would be on Antetokounmpo.

Losing DiVincenzo would leave a hole at the two spot because he is projected to start at shooting guard next season. However, it can be remembered that DiVincenzo was on his way out of the Bucks as part of the sign-and-trade deal for the Bogdanovic before it was canceled. The Bucks already insurance policies, as they shore up their backcourt this offseason by adding DJ Augustin, Bryn Forbes, Torrey Craig, and Nik Stauskas.

DiVincenzo, who averaged 9.2 points and 4.8 rebounds during his second season in the league, would give the Pacers a young option at shooting guard. The former Villanova standout, who is also known for his defense, could eventually get a more prominent role if the Pacers decide to part ways with Victor Oladipo. Lopez, on the other hand, could subsequently start and play a similar role in Indiana.

The Pacers previously viewed Turner as a franchise cornerstone, but the former Texas standout has become an expendable asset for the Pacers because of Domantas Sabonis. Sabonis had a breakout year last season, where he averaged 18.5 points on 54.0 percent shooting from the field to go along with 12.4 rebounds and 5.0 assists per game. His improvements did not go unnoticed, as he was named an All-Star for the first time in his career.

In fact, the Pacers reportedly tried to trade Turner before the free-agency period started. According to Gary Washburn of the Boston Globe, the Pacers were determined to arrange a sign-and-trade for Gordon Hayward. Indiana reportedly offered Turner and Doug McDermott in exchange for Hayward, but the deal did not come to fruition because the Celtics asked for Turner and Oladipo or TJ Warren.

Meanwhile, Swartz also has an interesting trade idea for the Pacers, who are looking to build on their fourth-place finish in the Eastern Conference standings last season. He believes that trading Oladipo and Turner to the Brooklyn Nets in exchange for Caris LeVert, Jarett Allen, and Spencer Dinwiddie makes sense for Indiana. The Pacers could lose Oladipo for nothing when he becomes a free agent, which is why trading him is a logical option.

Oladipo is a two-time All-Star, but Swartz said that a package of LeVert, Allen, and Dinwiddie would be a good haul for the Pacers. Allen could take Turner's place and become their primary rim protector, while Dinwiddie could provide a spark off the bench. LeVert, on the other hand, will be their new starting shooting guard. The 26-year-old is coming off a strong season, where he averaged 18.7 points in 45 games last season.

On the other hand, the deal would give the Nets another star who could complement Kyrie Irving and Kevin Durant, who are both ball-dominant superstars. There is no question, the Nets will be one of the contenders in the Eastern Conference next season, but most experts doubt their defensive capabilities. Adding Oladipo could boost their defense, while Turner can space the floor for Durant, Irving, and Oladipo.

"The Nets need a defensive stopper in the backcourt next to Kyrie Irving, and Oladipo is a former steals champion," Swartz said. "He would give Brooklyn a legitimate third star alongside Irving and Kevin Durant, and Turner would be a floor-spacing big man who helps open up the Nets' driving lanes."

The Miami Heat made significant moves this offseason to maintain their chances of at least keeping the Eastern Conference title in South Beach. The Heat secured the future of Bam Adebayo, signing him to a five-year, $163 million contract extension. They also kept starting point guard Goran Dragic and Meyers Leonard. They lost Jae Crowder to the Phoenix Suns, but they added Avery Bradley to beef up their backcourt.

Adebayo's contract extension effectively made them ineligible to offer a maximum deal to a 2021 free-agent superstar, but most experts are convinced that Heat president Pat Riley can find a way to make it work. Riley has proven time and again that he can make surprising deals, similar to their acquisition of then-free-agent Jimmy Butler despite not having enough cap space to sign him outright.

According to Barry Jackson of the Miami Herald, Milwaukee Bucks superstar Giannis Antetokounmpo remains the primary target of the Heat. However, there are growing speculations that the superstar forward might eventually sign a new deal with the Bucks following their acquisition of Jrue Holiday. If the Heat fails to land Antetokounmpo, Jackson said that Miami would shift their focus on acquiring Washington Wizards superstar Bradley Beal.

"If Giannis Antetokounmpo signs a max extension with the Bucks, Washington guard Bradley Beal becomes the No. 1 Heat target if or when he becomes available," Jackson said. "The Heat’s interest remains very high, according to a source with direct knowledge."

Beal has been mentioned in numerous trade rumors this offseason, with most reports linking him to contenders like the Heat, Los Angeles Lakers, Denver Nuggets, Boston Celtics, and Brooklyn Nets. The sweet-shooting guard is coming off the best season of his career, as he posted a career-high 30.5 points and 6.1 rebounds per game last season. Understandably, Wizards general manager Tommy Sheppard denied that they are planning to trade Beal.

"We’re building this team around Bradley Beal," Sheppard said on ESPN insider Zach Lowe's The Lowe Post podcast when asked about trading Beal this offseason. "He’s a tremendous human being. He’s a tremendous player. He’s exactly what we want to have here with the Washington Wizards."

However, things could change before the trade deadline next season, especially if the Wizards fail to win a lot early in the season. And if the Wizards decide to trade Beal or if the superstar asks Washington to trade him, Jackson thinks Miami has the assets to pull off a blockbuster trade. The Heat have attractive young players and future picks, which other interested teams do not have at this point.

"It likely would take Tyler Herro, probably either Duncan Robinson or Precious Achiuwa, and a 2025 first-rounder (which can be traded only if OKC is willing to unlock protections on Miami’s 2023 pick) and veteran cap facilitators (such as Kelly Olynyk) to make a competitive offer," Jackson said. "And even that might be topped by Denver, Boston, or another team."

Herro and Robinson are considered among the cornerstones of the Heat franchise after having productions last season. Herro averaged 13.5 points and 4.1 rebounds in 55 games, while Robinson posted 13.5 points and 3.2 rebounds in 73 games. Achiuwa, on the other hand, is tagged as one of the best big men in the 2020 NBA Draft, with some comparing him to Adebayo.

Giving up Herro, Robinson, Achiuwa, and a first-round pick would be a hard one for the Heat, but doing so to get Beal is reasonable. The Wizards guard is one of the best scorers in the league, finishing second to James Harden in the scoring race last season. It is also worth noting that Bradley still has three years left in his contract that would pay him, and his $28.75 million salary next season is considered a bargain based on his production last season.