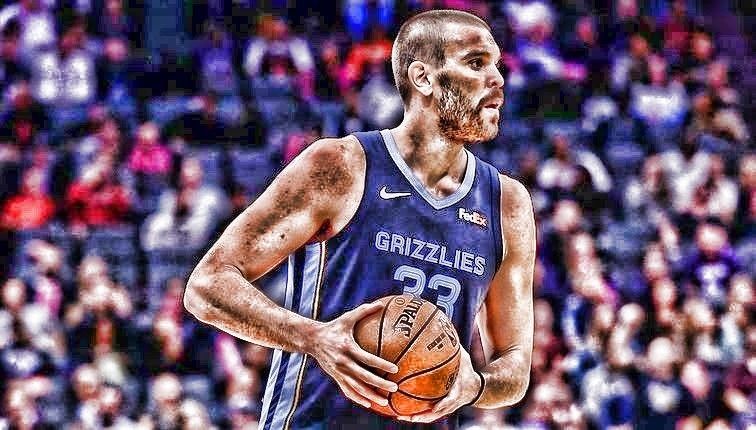 The Memphis Grizzlies’ current season has now reached its lowest point. After starting the season strong, the Grizzlies surprisingly took a downward spiral and is now in the bottom of the Western Conference standings, only ahead of the lowly Phoenix Suns. The same scenario happened to Marc Gasol, the Grizzlies starting center. Gasol is suddenly looking like an old 33-year old big man as his overall impact on games have been declining as of late.

Marc Stein of the New York Times first reported about this trade rumor surrounding Gasol and the Grizzlies.

“One whisper making the rounds: Marc Gasol can become a free agent at season's and, amid a growing belief around the league that he will indeed exercise that option, Memphis could be moved to explore trading Gasol now rather than face the threat of losing him without compensation.”

Gasol’s stat line of 15.4 points, 8.5 rebounds, 4.5 assists and 1.4 blocks per game still shouts borderline All-Star numbers. However, don’t expect that Memphis’ search for big returns will be a walk in the park. The Grizz shouldn’t expect too much from other teams in terms of assets to exchange for Gasol’s services. He hasn’t been in his usual efficient form ever since he had that ankle injury early this season, and his owed $24M this year could be a major turn-off for interested teams.

Still, I think it makes sense that Memphis is trying to move Gasol. There are plenty of reasons to believe that the team would not make the playoffs, and they have also secured a future franchise cornerstone in Jaren Jackson Jr.

It was already reported the past week that Atlanta Hawks veteran point guard Jeremy Lin has been in the trade radar of playoff-contending teams like the New Orleans Pelicans, Philadelphia 76ers and the Portland Trail Blazers. Another team has emerged in the Lin sweepstakes as Stein also reported that the Sacramento Kings have expressed ‘exploratory trade interest’ in the veteran playmaker. This comes in a bit of a surprise as the Kings’ backcourt players have been excellent this season. However, it could be that the team’s front office is looking for more experience and leadership on the point guard position, considering that they are making a serious playoff push as of late. Yogi Ferrell, their point guard acquisition last offseason, is not meeting expectations with his performance, averaging just 5.9 points and 1.8 assists per game.

Additionally, two more Hawks players were put on the trading block, via Stein.

"The Hawks are known to have made the veteran point guard Lin, big man Dewayne Dedmon and swingman Kent Bazemore available in advance of the Feb. 7 trade deadline in search of more draft picks."

Of the two players, center Dewayne Dedmon could be the easier player to deal this season. Dedmon has an expiring contract, and is actually playing well this season. The seven-foot big man is averaging 9.8 points and 7.6 rebounds in just 24.6 minutes per game.

On the other hand, the Hawks should get more creative in trading Kent Bazemore. Though he is doing well this season with numbers of 14.0 points and 4.0 rebounds, Bazemore will have a player option for next year, in which he is owed $19 million. There’s no doubt that he will opt in as he won’t arguably command that much money if he enters free agency this summer.

After ESPN’s Adrian Wojnarowski reported that the Dallas Mavericks have escalated discussions with other teams for a Dennis Smith Jr trade deal, another Mavs’ backcourt player in Wes Matthews is also reported to be on the trading block. Matthews, who is owed $18.6 million this season, is set to be an unrestricted free agent in the summer. Matthews’ expiring contract plus his ability to be an excellent 3-and-D player could be a deal sweetener for any team interested in trading for Smith.

Matthews was a key cog and consistent starting shooting guard of the Mavericks in the previous seasons. However, he is not getting his usual big minutes on the floor with the emergence of rookie wonder Luka Doncic. Mavs head coach Rick Carlisle has been putting Doncic on the shooting guard position as Smith, rookie Jalen Brunson and J.J. Barea have been manning the point guard role.

Still, Matthews is an outstanding shooter and defender when he is on the floor. He is posting above-average numbers of 13.3 points, 2.4 rebounds, and 2.4 assists while shooting a 38% clip from beyond the arc.

Bulls’ declining buyout of Robin Lopez, a player that the Warriors are interested in

Robin Lopez has been a commodity in the past couple of days, causing some buzz with an apparent heated confrontation with Chicago Bulls point guard Kris Dunn during team practice. That happened right after reports surfaced on social media that the Golden State Warriors are interested in acquiring Lopez if the Bulls buy out his $14M salary this season. Of course, the Bulls front office will not prioritize the buyout as reports have it that they are exploring the market for any trade deals for the 30-year old center.

ESPN’s Malika Andrews reported about how the Bulls are planning to deal with Lopez before the February trade deadline.

“The Bulls are working to get at least a second-round pick in a trade for Lopez and his $14 million expiring contract, league sources said. So far, there have been no discussions of a contract buyout, league sources said. If teams sense that Lopez could be bought out and become a free agent, there’s less of an incentive for a team to give up an asset to acquire him prior to the deadline in a trade.”

In 16.3 minutes per game this season, Lopez is putting up 5.6 points, 2.5 rebounds and 0.8 blocks. Lopez will indeed be a potential defensive anchor for playoff-contending teams who are willing to take on his salary.