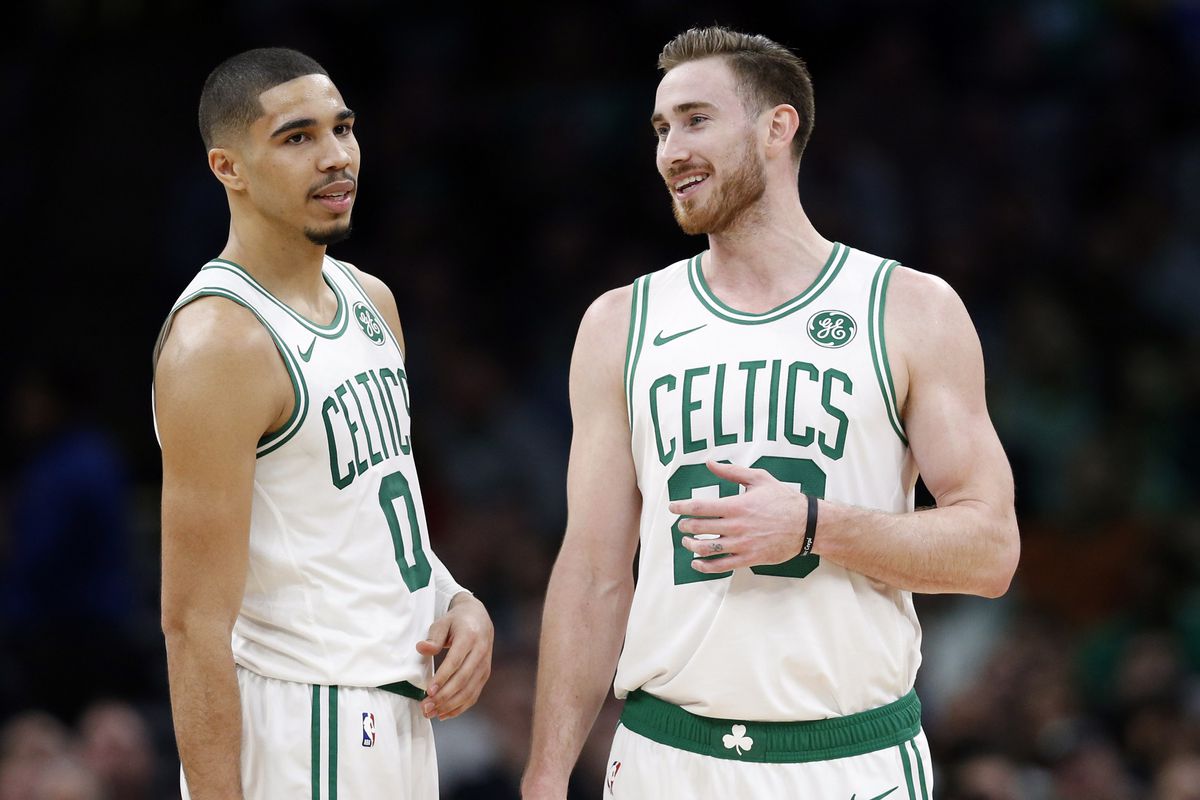 Celtics not giving up on Gordon Hayward just yet

While it’s true that Gordon Hayward hasn’t been the same All-Star caliber player that he was before sustaining that horrible ankle injury in his first game with the Boston Celtics, the storied franchise isn’t giving up on him just yet. A league executive told Keith Smith of the Celtics Blog at SB Nation that his team tried to gauge the Celtics’ interest in putting Hayward on the trading block. Apparently, team general manager Danny Ainge and the rest of the Celtics front office are holding on to the 29-year old veteran forward.

"After it was clear Kyrie [Irving] was leaving, I told our owner that we could maybe  grab Hayward for nothing if Boston tore it down. He's owed a lot of money, but only a couple of years left. We made a call, but it got shut down quickly. I think Danny [Ainge] and Brad [Stevens] know what they have in Hayward for this year and going   forward. He's going to be really good again."

Hayward averaged just 11.5 points, 4.5 rebounds and 3.4 assists per contest for the Celtics last season. Even though that stat line is still decent, it was also his lowest scoring production since his rookie year with the Utah Jazz during the 2010-11 season. There were a lot of instances that Hayward was obviously hesitant in driving down the lane, forcing him to settle on jumpers. His 2.6 free throw attempts per game last season was also his lowest since he was a rookie. That stat alone dictates how Hayward’s aggressiveness in offense declined.

Despite his obvious struggles, Celtics head coach Brad Stevens still gave the vet a lot of minutes on the court. He was tied with Boston rising star Jaylen Brown in terms of minutes, a reason that many pundits have speculated as one of the internal issues that caused conflicts within the Celtics locker room. Hayward told ESPN’s Jackie MacMullan that the team had so many scorers on the roster, a luxury that also decreased his production night in and night out.

"Even if I was fully healthy, there would be nights, production-wise, where the numbers just aren't going to be there. Somebody gets hot or I'm not shooting well, and we go in a different direction, and that's how it's going to be. And that's never happened to me before.

When it does happen, it's like, 'Oh, physically he's not there yet.' In my mind, I'm saying, 'No, no, I'm fine. The opportunities just weren't there.'"

Furthermore, it’s not just Hayward that has attracted the eyes of the opposing teams. Keith Smith also included a quote from an opposing executive who tried to make an offer for the services of Jayson Tatum.

“We tried to get him. The price they asked was insane, as it should be. He’s going to be    an All-Star. If his numbers were down, it’s only because no 19-year-old had been at that level before. Kemba (Walker) is a great addition and (Gordon) Hayward is going to be better, but Tatum is the franchise in Boston.”

Tatum upped his averages to 15.7 points, 6.0 boards and 2.1 assists per game in his sophomore year, but he is highly-expected to put up a break-out year in the upcoming 2019-20 season. Tatum, along with teammates Jaylen Brown, Marcus Smart and newly-acquired star point guard Kemba Walker were recently called up to the USA Men’s Basketball Team with a chance to compete for a roster spot when the Americans play in the 2019 FIBA World Cup slated later this month.

With Kyrie Irving moving on to the Brooklyn Nets and Al Horford signing with the Philadelphia 76ers, the Celtics are now in need of a new main scorer, as well as a new veteran leader. Tatum could be that big-time bucket-getter that they need especially in the crucial moments of games, while Hayward’s playmaking ability and veteran experience could be the team’s steadying presence.

How will Cavs address need to rebuild?

The Cleveland Cavaliers haven’t made many moves this offseason, but there is a growing belief that the team’s front office is itching to shake things up on their roster. Ever since LeBron James left them last year to play for the Los Angeles Lakers, the Cavaliers haven’t indicated a definitive direction in which their team is headed for. Before last season began, their desire was to stay in playoff contention, but an injury to All-Star big man Kevin Love ultimately made this goal an almost impossible feat to achieve.

This summer, the Cavaliers hired a new head coach in John Beilein, a successful long-time coach at the college ranks. That hiring could indicate that the franchise is inclined on a rebuild that will help boost the development of their young players, as well as establish a new system and culture. The team also waived veteran shooting guard J.R. Smith after failing to engage with a trade partner for the 33-year old gunner.

After a roller-coaster year they endured in 2018, the Cavaliers have been fairly quiet this summer. The main reason for that is Cleveland doesn’t have any financial flexibility to sign a free agent, forcing them to stay put and keep the roster intact for now. But the team did make some headlines during the 2019 NBA Draft, selecting Darius Garland, Dylan Windler and Kevin Porter Jr. We never expected the Cavaliers to pick up Garland with their fifth overall selection, as the 6-foot-2 guard will be sharing minutes with Collin Sexton, the team’s rising point guard. While the Garland-Sexton duo has the potential to mesh well in offense, playing them at the same time could cause numerous mismatches on the defensive end.

Joe Vardon of The Athletic, the insider within the Cavaliers camp, reports that Beilein is inclined on giving Garland an off-the-bench role, with Sexton and Brandon Knight sharing backcourt duties in the starting five.

“Barring injury or unforeseen trades, Beilein’s first starting five should probably be    Sexton and Brandon Knight in the backcourt, Kevin Love and Cedi Osman as forwards and Tristan Thompson at center. (Hey, not bad, you might think. This lineup, or at least something close to it, went 7-7 last season in a 19-win year.)

Garland, Jordan Clarkson, Larry Nance Jr. and likely Windler should probably get   big minutes off the bench. Matthew Dellavedova and John Henson are probably behind them, with a chance to get minutes, followed by Ante Zizic and Porter. Maybe Zizic is ahead of Henson? If Thompson is traded, perhaps Zizic gets another chance to start?”

Still, the Cavaliers’ logical plan moving forward would be to move Love and Thompson in exchange for young assets and future draft picks. However, the Cavaliers have not given out any hints that they are putting Love on the trading block, and Sexton confirmed that by saying that he feels Love won’t go to another team this season. That should leave the other vets on the roster as expendable pieces that the team could move midway through the upcoming season, as Vardon points out.

“The Cavs have no fewer than five players entering the final years of their contracts (Thompson, Clarkson, Delly, Henson, and Knight). One or more will be traded at some point during the season. Also, this team was among the top three in the NBA in man games lost to injury last year, in part because of the organization’s desire to pick  near the top of the draft. So if things go south, a similar plan might follow, which  would mean an amoeba-like starting five and rotation.”

The most feasible player to be traded in that list would be Clarkson, a 27-year old scorer who will just carry a reasonable $12 million salary this season. The 6-foot-5 Filipino-American combo guard is coming off a career year that saw him rack up 16.8 points, 3.3 rebounds and 2.4 assists per game.