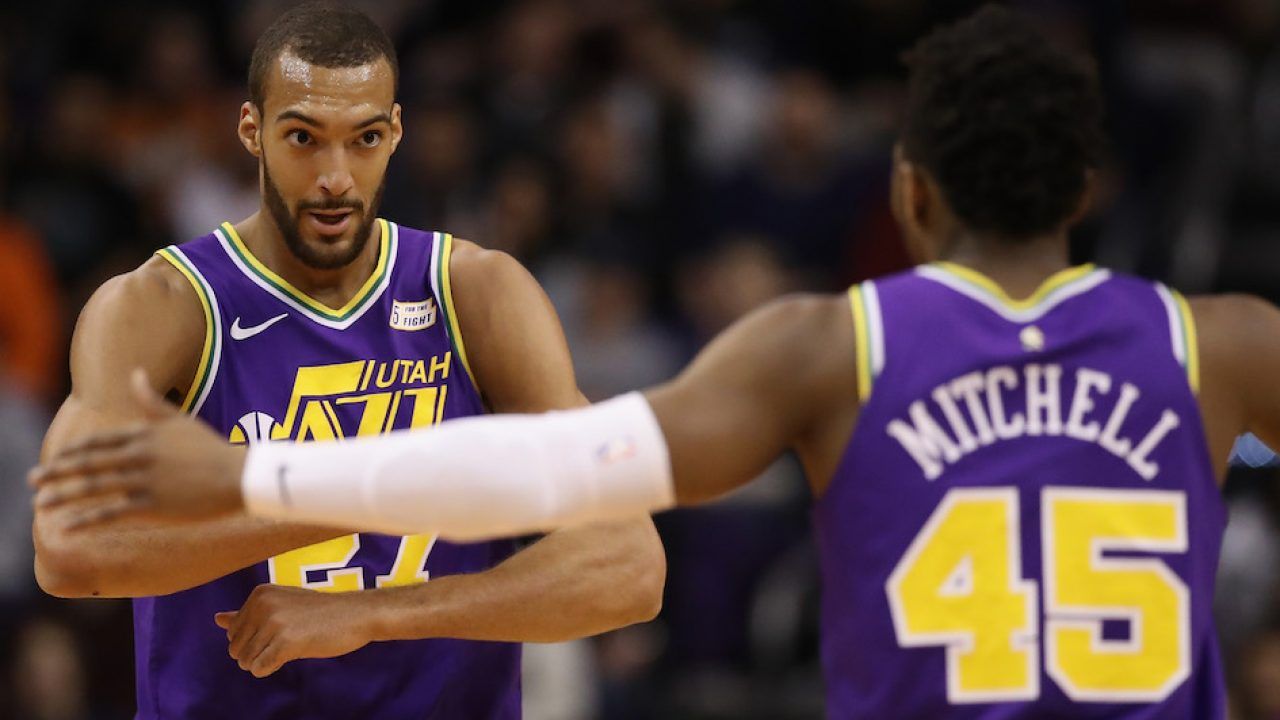 Utah may not have to break up star core after all

It is such a shame that the Utah Jazz are now more popularly known as the team who had the first NBA player who tested positive for the coronavirus. Their ascent to one of the elite contenders in the Western Conference has been an overlooked story in the league, and it’s all because of what shooting guard Donovan Mitchell brings to their offense and how big man Rudy Gobert anchors their defense.

However, Gobert tested positive for the virus and his carelessness in the Jazz locker room was widely-reported. According to multiple reports, some Jazz players were frustrated about the fact that Gobert tried to downplay the seriousness of the virus and jokingly touched his teammates and their belongings. But it turned into a grim joke when Mitchell also tested positive just hours after Gobert’s positive results.

Now, it is being speculated that the relationship between the two stars are ruined to the point of no return. Rumors have it that the Jazz front office has to trade either one of Mitchell or Gobert, especially if NBA Commissioner Adam Silver decides not to resume the current season.

But the French big man also recently squashed these rumors, saying that he has already talked to Mitchell and they discussed that they share the same passion and goal for chasing the coveted championship trophy. During an Instagram Live video he did with Taylor Rooks of Bleacher Report, Gobert said that he and Mitchell don’t have the perfect relationship but they are bent in pursuing the same goal. (h/t USA TODAY’s Jace Evans)

"It's true that we didn't speak for a while, but we spoke a few days ago and you know, like I said, we're both ready to go out there and win a championship for this team.

Before the season was suspended, the Jazz are in the running for a home court advantage in the playoffs, as they hold a 41-23 record for the 4thseed in the Western Conference. Obviously, Utah is in a better position this season in terms of roster depth. They acquired veteran star point guard Mike Conley and scoring small forward Bojan Bogdanovic last summer, and added spitfire gunner Jordan Clarkson two months into the season.

As expected with teams who have new key players, the Jazz struggled early as they searched for their new identity. But they were able to maintain the course, and Clarkson’s arrival provided a much-needed scoring punch off the bench. Conley also grew more accustomed to his new team’s system, and Mitchell and Bogdanovic provided the primary shot creating for the squad.

While this issue has certainly left a negative mark on their off-court chemistry, it is becoming apparent that the players’ professionalism should make it easy for them to still produce on the basketball court. As per Ryan Miller of KSL.com, Conley made a similar statement with Gobert’s, emphasizing that there is no perfect relationship. Conley reassured Jazz fans that their two All-Stars are already itching to get back on the court and compete.

“Nobody really has a perfect relationship. Teammates aside or whatever situation you're in — some of the best players in the world in our game ever have disagreed on things, or had arguments, or even fought in practices — whatever it may be — and went on to win championships and be successful and be brothers for life.

So between Donovan and Rudy, if they feel certain ways about each other — which I honestly don't think that's the case at all — they're grown men and they handle it. And they go out there and they compete and they try to win night in and night out, so you would never notice on our end. So, I just feel comfortable knowing that we have two pros who go out there and work every day, care about the team, and just gonna do what they got to do to win.”

With that said, there’s no problem if teammates are not really close friends off the court. During the Chicago Bulls’ championship era in the 90s, Dennis Rodman said that he didn’t even spend a lot of time talking with Michael Jordan. Yet, you can see how hard they worked on the court, and their successful pursuit of six championship rings just says a lot regarding their basketball chemistry.

Moreover, people within the Jazz circles already believe that the team is not planning on breaking up the roster anytime soon. The Athletic’s Tony Jones, a beat writer for the Jazz, reiterated that Mitchell’s dynamic skill set and young age make him one of the most untouchable players in trade negotiations. All in all, Jones reported that the management has not put forth any green light on possibly shipping either stars.

“There aren’t any plans on trading either one of them. If you made a list of the most untouchable players in the league, Mitchell would be on that list. He’s a dynamic talent, who is very well liked and a draw to other players around the league. He’s been terrific in the community. Most important, the Jazz have years of team control left in regards to his contract.

As for Gobert, the Jazz have built their entire identity defensively around his talents. He’s one of the top 15 players in the league. He’s a unique player in the league. It’s imprudent to speculate on who the Jazz can get for either guy, because there aren’t any plans on trading either guy.”

But then again, this is the first season that the Jazz front office has made drastic improvements to their roster. No matter how good Ricky Rubio was for them last year, Conley is still a huge upgrade in the point guard position. Bogdanovic and Clarkson also give them the secondary scorers that they didn’t have in the past couple of seasons. Most importantly, Utah’s bevy of scorers will take away opposing defenses’ attention from Mitchell, making it easy for the latter to drive down the lane or take advantage of off-ball scoring situations.

However, this also means that the time is already ticking for them. If they still fail to exceed their accomplishments in the playoffs in the past few years, then it might be time for the management to choose either Mitchell or Gobert and consider retooling the team. When trade speculations heated up a couple of weeks ago, one prominent team was rumoured to be interested in nabbing Mitchell.

According to SNY’s Ian Begley, it has always been the goal of New York Knicks’ newly-installed team president Leon Rose to pursue a star player to be their cornerstone for the years to come. But in order for them to acquire Mitchell from the Jazz, they need to let go of their young assets and a couple of valuable future first-round draft picks.

“An opposing team executive tells Begley that any package that doesn't         involve Mitchell Robinson or RJ Barrett and two future first-round picks would probably be a non-starter for Utah.

Robinson, meanwhile, wouldn't be much of a fit for Utah with Gobert still in the mix,  so the exec speculated that a package of Barrett and two unprotected firsts would get New York in the conversation for Mitchell.

Utah would need to add roughly $2 million in salary to make the math work. And if the Knicks didn't want to offer Barrett in any deal? The exec speculated to Begley that the Knicks would likely need to include three future first-round picks (one unprotected) in that scenario.”

This scenario just gives us an idea on how high Mitchell’s value is on the trade market. But is Barrett enough for the Jazz to part with a proven star like Mitchell? That is an important question that the team has to answer in the offseason, especially if it turns out that Mitchell has had enough of Gobert.