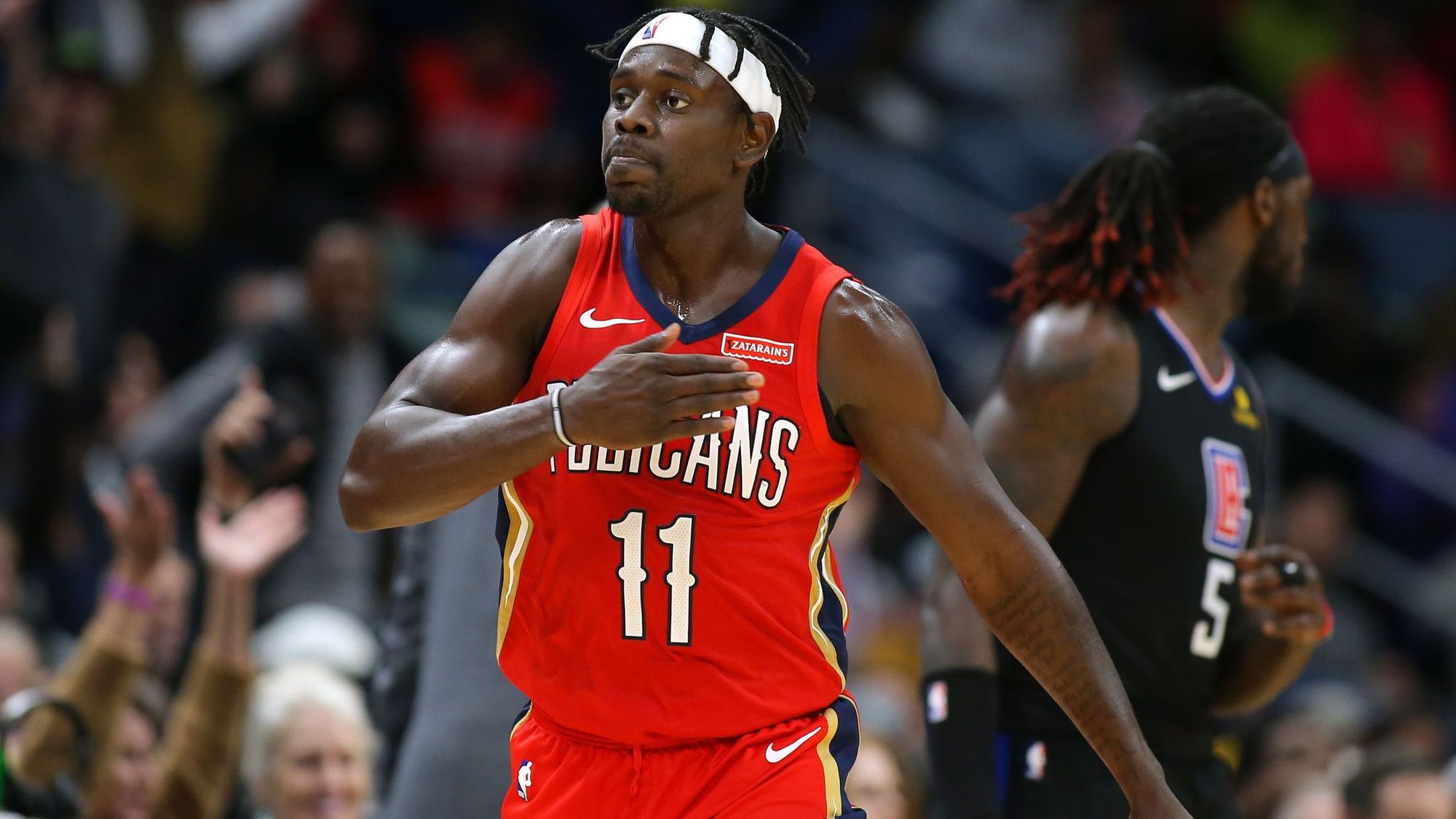 NBA Trade Buzz: Jrue Holiday Would Be a Good Fit for Brooklyn Nets

The Brooklyn Nets will be one of the most interesting teams to watch next season. The Nets will be playing in its first full season with a healthy superstar duo of Kyrie Irving and Kevin Durant. Brooklyn will also be playing under rookie head coach Steve Nash, who has assembled a coaching staff led by his former mentor Mike D'Antoni, Jacque Vaughn, and former Phoenix Suns teammate Amar'e Stoudemire.

Brooklyn is also a team to watch out for on the trade market, as they are expected to try to add another marquee player to their roster in the hopes of improving their title chances next season. The Nets have the assets to acquire another star to play alongside Irving and Durant. Their young players who made an impact last season like Caris LeVert, Spencer Dinwiddie, and Jarrett Allen would be attractive to teams in trade negotiations.

Alex Schiffer and John Hollinger of The Athletic examined a potential trade that would send New Orleans Pelicans guard Jrue Holiday to the Nets in exchange for Dinwiddie, Allen, Taurean Prince, and a 2020 first-round pick from the Philadelphia 76ers. According to Schiffer, Holiday's ability to play off the ball makes a him a good fit alongside Durant and Irving, who are both ball-dominant superstars.

Schiffer added that Holiday's ability to play high-level defense would be needed by a contending team like the Nets, who are lacking a lockdown defender. Hollinger agreed that trading for Holiday makes a lot of sense for the Nets despite the fact that they will be giving four assets in the proposed trade package. Hollinger said that Holiday would fill a huge hole for Brooklyn on the defensive end of the floor.

"Holiday is the single best player who is likely to be available this offseason," Hollinger said. "He plays what is probably the Nets’ weakest position. And his elite backcourt defense is a stark contrast to what they’ll get from Irving. That alone makes a deal like this a major target for the Nets."

Hollinger added that the deal would also be a good trade for the Pelicans, who will be under new head coach Stan Van Gundy. The trade would give the Pelicans several young assets who could grow alongside their young core led by Zion Williamson, Brandon Ingram, Lonzo Ball, Josh Hart, Jaxson Hayes, and Nickeil Alexander-Walker. He also pointed out that Holiday would be a free agent next year, and they could lose him for nothing in free agency.

"Why do the Pels do this? Because Holiday only has one year left on his deal before he can become a free agent," Hollinger said. "It’s possible he extends with the Pels, but at 30 he’d probably like to play for a real contender. Note that a deal could also include an “extend-and-trade” component that adds years to Holiday’s contract."

Hollinger also thinks that the Pelicans would benefit a lot from Allen, who could take the starting center spot, while Dinwiddie could be their backup point guard next season. On the other hand, Schiffer agreed that Dinwiddie would be a great acquisition for the Pelicans, but he thinks that Allen could end up as a trade chip because the Pelicans already have Hayes, who averaged 7.4 points and 4.0 rebounds in his rookie year last season.

"Dinwiddie would give the Pelicans a more experienced floor general to lean on if  Lonzo Ball gets injured or struggles, and Prince’s 3-and-D potential is the kind of player New Orleans can use," Schiffer said. "I’m skeptical of New Orleans’ interest in Allen with fellow Texas big Jaxson Hayes there, but they could easily flip one for another player or a pick."

Hollinger and Schiffer also examined a proposed trade that would send Dinwiddie and Prince to the Sacramento Kings in exchange for Buddy Hield. Hield has been mentioned in a lot of trade rumors this offseason, as his frustration about his role in Sacramento has been well-documented. Previous reports also indicated that Hield is no longer talking to Sacramento head coach Luke Walton, which might mean that the bridge has already been burned.

Both analyst agreed that getting Hield would be a good move for the Nets only if they lose Joe Harris, who is set to become an unrestricted free agent this offseason. Hollinger said that Hield has a great chance to become a good fit with the Durant-Irving duo. There is a concern about Hield's contract, as he will be playing just in the first season of the four-year, $94 million contract extension he signed with the Kings, but Hollinger thinks it won't be a huge factor.

"An Irving-Hield-Harris perimeter trio would get absolutely torched, but replacing Harris’s shooting would be a must if he left," Hollinger said. "Hield’s contract is a minus and the resultant tax issues are real, but he’s a perfect weapon to have next to Durant and Irving, even better than Harris in this regard actually. Also, the money on his deal stair steps downward in the future seasons, from $24.9 million in 2020-21 to just $19 million in 2023-24, which could make this financial pill easier to   swallow."

Hield averaged 19.2 points on top of 4.6 rebounds and three assists for the Kings last season. He ended up as the team's second-leading scoring behind De'Aaron Fox, but the 27-year-old guard reportedly had a falling out with Walton because of his benching last season. In 72 games, he started in just 44 games, as Sacramento opted to start Bogdan Bogdanovic at shooting guard.

Schiffer thinks that Sacramento would benefit from the said deal because Dinwiddie could provide a spark off the bench as Fox's reliever. Taking Hield's contract off the books would also give them a great chance to retain Bogdanovic, who will become a restricted free agent. Prince's fit to the roster is a question mark, but he thinks his arrival would make Harrison Barnes expendable.

"Sacramento’s logic would be to clear its books under the McNair administration and move forward with a Fox-Dinwiddie-Bogdanovic backcourt," Hollinger said. "Prince’s fit is less clear, but he needs to be in this deal for the salaries to match. His arrival could also make it easier to move off Harrison Barnes, another regrettable contract for Sacramento's 2019 offseason."

Spencer Dinwiddie Would Be an Upgrade for Los Angeles Clippers

Meanwhile, Schiffer and Hollinger also discussed a possible trade between the Los Angeles Clippers and the Nets. In the proposed deal, the Clippers would acquire Spencer Dinwiddie in exchange for veteran point guard Patrick Beverley and incoming third-year guard Landry Shamet.

Schiffer thinks that Dinwiddie would be a great acquisition for the Clippers, who are expected to shore up their roster after a disappointing exit in the 2020 NBA Playoffs. It is also worth noting that the Clippers hired Kenny Atkinson as their assistant coach. Atkinson previously coached the Nets, and is often credited for the development of their young players like Dinwiddie, Caris LeVert, and Jarrett Allen.

"The Clippers want to upgrade their roster after a disappointing loss to the Nuggets in the Western Conference semifinals, and they just hired a guy named Kenny Atkinson to their coaching staff. Could Dinwiddie join him in his hometown of Los Angeles?" Schiffer wrote. "Dinwiddie would be an upgrade at point guard for the Clippers and would get to start while Lou Williams continues to come off the bench."

Dinwiddie is coming off a great season for the Nets. After averaging 16.8 points and 4.6 assists per game during the 2018-19 NBA season, the 27-year-old took his game into another level last season, as he posted career-highs 20.6 points, 6.8 assists, and 3.5 rebounds per game.

Meanwhile, Grant Hughes of Bleacher Report suggested that the Clippers should reach out to the Phoenix Suns about a possible trade for veteran point guard Ricky Rubio. Adding Rubio to their roster would solve the playmaking needs of the Clippers while retaining the defensive punch brought by Beverley. Rubio's three-point shooting is still unattractive, but Hughes believes that it will not be a big deal for Los Angeles.

The Clippers will likely prioritize adding another playmaker because superstar Kawhi Leonard reportedly wants them to add a new starting point guard. Stephen Smith of ESPN said that the two-time NBA Finals MVP has clamored for it. Leonard has a lot of leverage at this point because he would be a free agent after next season and might bolt out if the Clippers fail miserably again next season.

"Rubio is basically the prototypical pass-first, unobtrusive model for the position,"Hughes said. "His shooting could cramp spacing a touch, particularly if L.A. uses conventional big man Ivica Zubac more often next season. But Rubio hit 36.1 percent of his triples in 2019-20. Defenses still tend to deprioritize him off the ball, but that hit rate, if repeatable, means they'll pay for their neglect."

Rubio started in all 65 regular-season games he played with the Suns last season, where he averaged 13.0 points and 8.8 assists on top of 4.7 rebounds and 1.4 steals per game. The 30-year-old point guard, who will be entering his 10th season in the league, still has two seasons left in his three-year, $51 million contract with Phoenix.