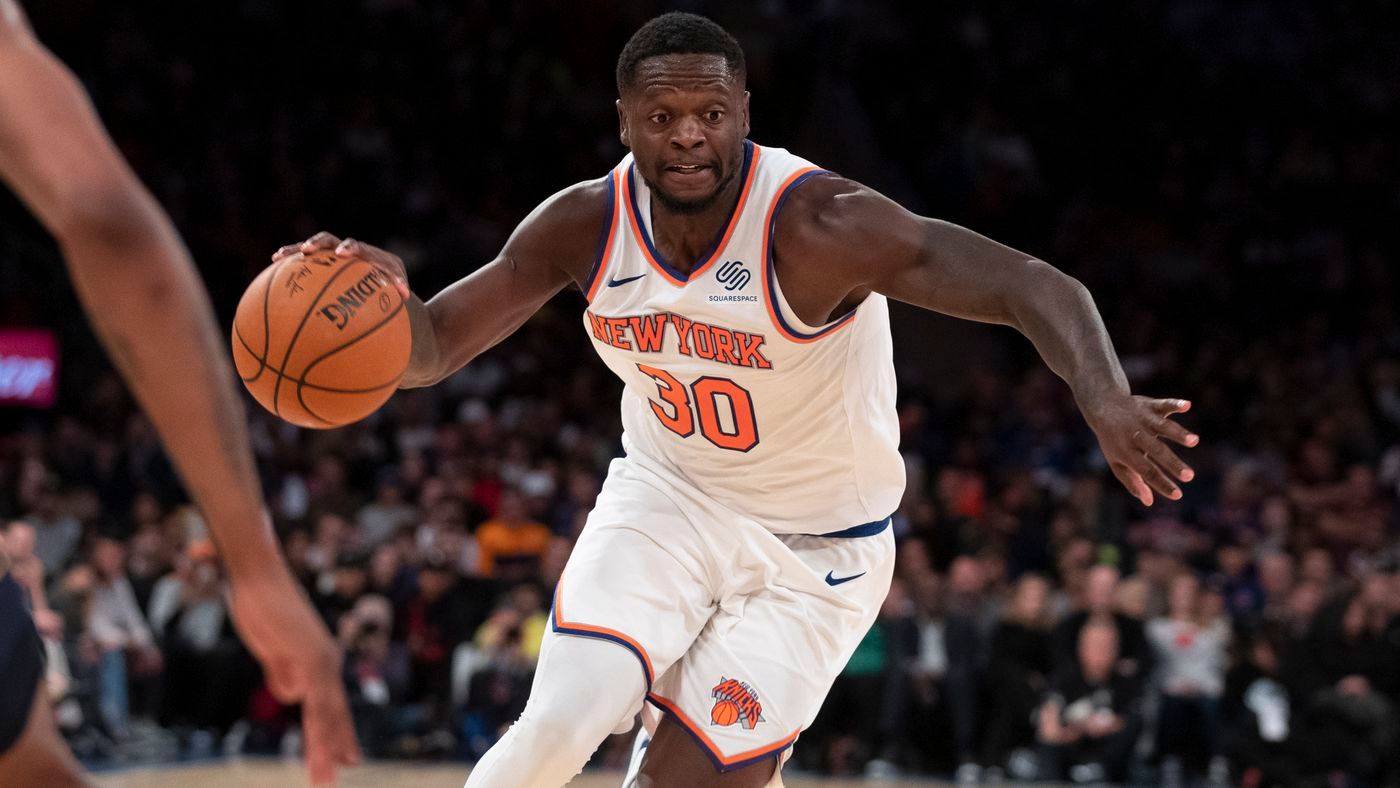 Julius Randle and the New York Knicks aren’t exactly the perfect couple. Randle’s name was not on the Knicks’ radar up until every big-time max free agent committed to another team. With no other recourse but to make do with what is presented in front of them, the Knicks front office nabbed Randle as their biggest catch and added other veteran players to the mix.

But the Knicks are still sitting on the bottom half of the league, and it won’t be a surprise if only a handful of their current players remain on the roster next season. Rookie swingman RJ Barrett and sophomore center Mitchell Robinson are the only two names considered as untouchables in trade talks, although we have also seen how the team’s front office hesitated in letting go of Kevin Knox and Frank Ntilikina.

Aside from those names, New York fans may be seeing tons of new faces on their squad after this season. Randle should be an intriguing trade asset for the Knicks. Make no mistake about it – the lefty combo big has been the team’s most productive player. The 25-year old power forward is putting up near double-double averages of 19.5 points, 9.7 rebounds and 3.1 assists per contest.

Given his young age and the continuous increase in his on-court production, it is a sure thing that Randle will attract interest in the trade market. Marc Berman of the New York Post reported that Leon Rose, the Knicks’ new team president, will not hesitate in shipping Randle for the right price.

“Despite his relationship with Randle, a CAA client, Rose is certainly open to either dealing Randle or not executing his contract option for the 2021-22 season, though in that case, he still would count for $4 million on the salary cap. Leading into the Feb. 6 trade deadline, the Knicks were willing to move Randle and had talks with Charlotte.”

Randle also does not pack a very lucrative contract. He is owed almost $19 million next season, while the last year of his contract only has a guaranteed amount of a $4 million hit on the team. That final year of Randle’s contract falls on the 2021-22 season. The offseason in preparation for that campaign will feature a stacked free agency class, so a team who will trade for Randle will just take a $4 million hit in their cap space if they decide not to fully guarantee his contract.

This is not the outcome that both parties envisioned last summer. After eclipsing the 20-point average in the scoring column while co-existing with Anthony Davis in the New Orleans Pelicans’ frontcourt, the Knicks anticipated that Randle would break out into an All-Star this year. But despite finishing with 30 double-double nights this season, it is noticeable that Randle is still not a player you can ask to lead on and off the court.

In a separate column just this month, Berman also reported that some Knicks players are not buying into how Randle plays within the team system. Berman singled out Barrett as one of those frustrated players.

“Nevertheless, some Knicks, including rookie RJ Barrett, were frustrated by Randle’s penchant for not distributing the ball quickly enough and overdribbling, according to two sources familiar with the situation.

Randle became less of a turnover machine in the final two months and became a little less clunky on the drive. Still, the on-court chemistry between Randle and Barrett, who is used to having the ball in his hands, bears major watching next season. For the most part, Barrett kept quiet about the Randle situation.”

If that is true, then we could make a solid case that this is something that can’t be easily fixed. It is without a doubt that the Knicks prioritize Barrett’s happiness than Randle’s. While it’s true that he is posting huge numbers across the board, many people still question if Randle is indeed making the right decisions and the winning plays on the court. He is a ball-heavy operator on the offensive end, and his defense poses more questions than answers.

But then again, it also boils down to the right fit for a player to blossom into the star he should be. Is he destined to be a first option on offense, or does he thrive in a supporting role, a position he excellently fulfilled for a Pelicans squad headed by Davis and Jrue Holiday.

To answer this, Berman included an exclusive quote from an anonymous Eastern Conference personnel man.

“You can’t argue with his productivity. But he was in the wrong role. He absolutely should not be your No. 1 or even No. 2 option, maybe not even No. 3 on a serious contender. He doesn’t have a good enough feel, [and is] much too ball-dominant. I don’t trust his decisions with the ball. As sixth man, he would fit perfectly because I don’t think he gives you much defensively either. That’s more in line with a sixth-man role.”

Will the Knicks front office give in and pull the plug on their partnership with Randle? That’s a question they need to answer in the offseason. It is essential for them to start creating their new identity before the start of training camp next season. The Knicks have tons of uncertainties to address, starting with the possibility of hiring a more experienced head coach to lead their rebuilding process.

The Sacramento Kings front office has to figure out what it wants to do with the Harry Giles situation. The 21-year old combo big man will be entering unrestricted free agency as the Kings remain uncommitted to extending his contract beyond this season.

After being drafted by the Kings in the first round of the 2017 NBA Draft, Giles redshirted the whole season to recover from the multiple knee injuries he sustained while playing ball in high school and college. Now playing healthy and injury-free, Giles has been producing good numbers despite logging in only 15.2 minutes per contest this season. A versatile big man who is very mobile on his feet, Giles is norming 7.0 points, 4.2 rebounds and 1.3 assists while shooting a very efficient 56% clip from the field.

With the looming possibility of Giles walking away in free agency, it made a lot of sense for Sacramento to trade him away in exchange for a few assets. However, the team opted not to part with their young power forward, as per James Ham of NBC Sports.

“Secondly, the Kings opened the door for opposing teams to come in and steal away a young player without compensation. According to a league source, there were multiple teams that contacted Sacramento to check on Giles’ availability at the NBA trade deadline, which the Kings turned away.

Whether anyone is willing to offer $4 million a year is unknown, but it might not take  that much. As an unrestricted free agent, Giles can go to any team offering up a  salary, regardless of whether it is more than what the Kings might offer.”

Given the fact that they are not committing to offering him a contract extension, it is mind-boggling as to why the Kings did not accept any trade suitors for Giles. A trade could have possibly netted them a second-round draft pick or maybe a veteran role player to come in and contribute right away.

With that said, the Kings’ priority this offseason is to have enough financial flexibility to re-sign shooting guard Bogdan Bogdanovic. The 27-year old gunner is set to become a restricted free agent, and it’s expected that he will receive numerous near-max offer sheets from other teams.

Going back to Giles, it remains to be seen how he will be valued in the FA market. His talent and potential are there, but he is still a defensive liability and his offensive limitations cripple him of being really impactful on the court. In the same column, Ham emphasized that there’s still a faint shimmer of hope that Giles will return to the Kings’ line-up next season.

“Hope isn’t completely gone for Kings fans who would love to see Giles stick around long term, but it’s waning. We’ll know more when the NBA reopens for business, but Giles did enough during his opportunity to intrigue plenty of teams around the league.”

The Kings are currently holding a 28-36 record in the Western Conference standings.