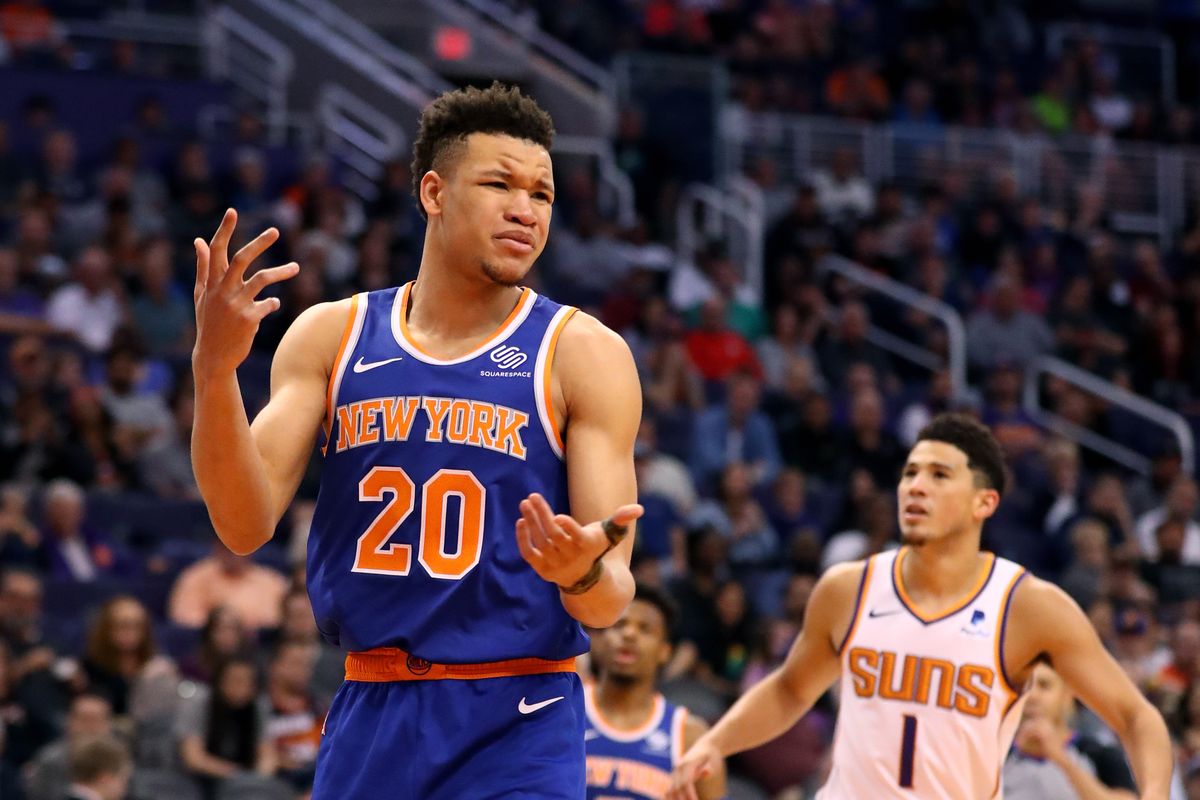 Days before the trade deadline last February, it appeared that the New York Knicks front office were willing to use young forward Kevin Knox as a valuable trade asset. The former 9th overall pick of the 2018 NBA Draft has not blossomed to a budding star as how the Knicks organization expected him to be. After averaging 28.8 minutes and starting in 57 games last year as a rookie, Knox’s minutes is down to 18.1 and he has only started in four games this season.

With his minutes clipped this season, Knox has also seen a dip in his production. He is only averaging 6.6 points and 2.8 rebounds, a far cry from his 12.8 and 4.5 stat line last year. Moreover, his shooting percentages are atrocious. Knox is only producing a 65% clip from the free throw line, 32% from three-point territory, and an overall 36% clip from the field. With all these dips in his on-court impact, many people expected that the Knicks would be more than willing to include him in trade negotiations.

However, the Knicks did not manufacture a big trade before the deadline, and Knox is still with the team for the rest of the season. SNY’s Ian Begley recently reported that the Knicks top brass became hesitant in letting go of the 20-year old swingman.

“Several teams in touch with the Knicks prior to Mills' reassignment came away with the impression that New York was very hesitant to deal Knox, per SNY sources.

Before Mills was let go as team president, the Knicks, per sources, had a package that  they felt Golden State liked in exchange for D'Angelo Russell. It's unclear if Knox was included in that package. But teams generally had the feeling that Knox was not going to be moved unless it was for a young star, sources say. So that gives you some indication of how the club values Knox.”

Begley also went on to note that the organization still values Knox as an integral member of their young core. Prized rookie forward RJ Barrett has been showing out to his true form as of late, while the high-leaping sophomore defensive big man Mitchell Robinson has been racking up nightly double-doubles.

But the trio of Knox, Barrett and Robinson don’t exactly make shockwaves around the league. There are still other young cores who have more promise and talent. Yet, the Knicks can inject more potential to their future if they nab a high pick in this year’s draft. Their lowly 19-42 win-loss slate is the third-worst in the Eastern Conference, and the fifth-worst in the league. With incoming game-changers like Anthony Edwards, LaMelo Ball, RJ Hampton and James Wiseman entering the draft, the Knicks may struck gold this time around.

Of course, there is still light at the end of the tunnel for Knox. He is still young, and he has shown glimpses that he could be a very versatile player in the future. Along with his lengthy 6-foot-9 frame, Knox has displayed bursts of mobility and an average ball-handling ability that can still be polished.

As per Marc Berman of the New York Post, Knox’s father, Kevin Knox Sr., reiterated that the team’s trainers have been hands-on on making sure that his son is developing all facets of his game. He also emphasized that Knox is still young, and he still has all the time to figure things out.

“This year they’re working on his defense. Last year they were offensive-oriented. He was really offensively aggressive and making things happen as a 19-year-old rookie. The second year, he needed to work on defense more to become a complete player. The third year, he’ll put it all together.

I’ve told my son to always look at the positive when something throws negatives at you. If you throw lemons, I’ll make it lemonade. If he’s in New York, we’ll love it. If they decide to go in a different direction, we know he’ll put it together because he’s only 20 years old.’’

It remains to be seen if Knox will indeed blossom into a star in the NBA, but the Knicks coaching staff can gauge that by giving him more exposure this season. As their playoff hopes are surely down the drain already, developing young players like Knox should be their priority moving forward.

The Orlando Magic has been waiting for Aaron Gordon to finally make a breakthrough All-Star season for a while now. But since being selected as the 4thoverall pick in the 2014 NBA Draft, Gordon has steadily improved to become a regular starter for the Magic. He has improved his playmaking, and his offensive arsenal is not just built on his high-leaping, uber-athletic finishes at the rim.

Even though he has not become an All-Star in his six years in the league, Gordon has vastly developed his all-around game on both ends of the floor. His much-improved performance has attracted a number of suitors, and the Magic apparently shopped the 6-foot-9 power forward before the trade deadline. Heavy.com’s Sean Deveney reported that Gordon also gained the interest of the Golden State Warriors.

“Golden State was among the teams with whom the Magic discussed a Gordon trade. So were the Timberwolves. Those two wound up making the most significant trade of the deadline period, swapping D’Angelo Russell for Andrew Wiggins. Orlando had been interested in Russell last summer when he was a restricted free agent.

There was chatter, too, involving the Suns. But Gordon, the No. 4 pick of the 2014 draft, is still with the Magic. Perhaps not for long — executives around the league expect that Gordon will be back on the trade block in the offseason, too.”

Nothing concrete materialized out of the Warriors-Magic negotiations, but it is certainly interesting to see how things will unfold if both teams agreed on a deal. There is no doubt that Gordon can keep up with the Warriors’ motion offense, but the question is how he would share the court with Draymond Green. They arguably share the same position, although Gordon’s improved defensive instincts can help fill in the role that ex-Warrior Kevin Durant fulfilled on that end of the floor.

As for a potential trade with the Minnesota Timberwolves, Gordon could have formed a formidable 1-2 punch on the frontcourt with star Karl-Anthony Towns. Both big men possess a potent inside-outside game, and Gordon’s ability to cover all bases on defense can make up for Towns’ weakness on that end. However, it is certainly obvious that the Wolves’ move to acquire star point guard D’Angelo Russell was the better deal to make. Since shipping veteran playmaker Jeff Teague, the team was left with no starting-caliber point guard. Moreover, Russell packs more potential and fits in better alongside Towns.

But Deveney also followed this one up by saying that the Magic top brass was really determined to find Gordon a new home. This brings us to an assumption that the team will again gauge the trade market for Gordon after the season.

“They were trying, and they tried hard to get something done with him at the deadline. All that gets brought back into focus once the season is over and you have a  good idea what the market is for him.”

On top of that, SNY’s Ian Begley also chimed in on the matter, reporting that the Magic was interested in bringing in a quality point guard to complement All-Star center Nikola Vucevic. Begley said that the Magic front office already talked to the Brooklyn Nets to see if they are interested in trading their scoring guard Spencer Dinwiddie.

“Some members of the Magic and Pistons, specifically, had internal interest in exploring trades for Dinwiddie prior to the trade deadline, per SNY sources. Could a package including Dinwiddie have landed a player like Aaron Gordon from Orlando? Is Gordon the kind of player that can help push Brooklyn into the East’s upper echelon? Some execs believe a player like Gordon can help Brooklyn but wouldn’t  push them into the echelon of NBA title contender. But again, the only person whose  opinion truly matters here is Marks’ and the Nets’ players he consults.”

With all these on the table, it is exciting to see if Gordon would land on another team this offseason. As there are no notable big names available in free agency this summer, we might see an influx of trades, especially with teams who are more than desperate to improve their roster depth.