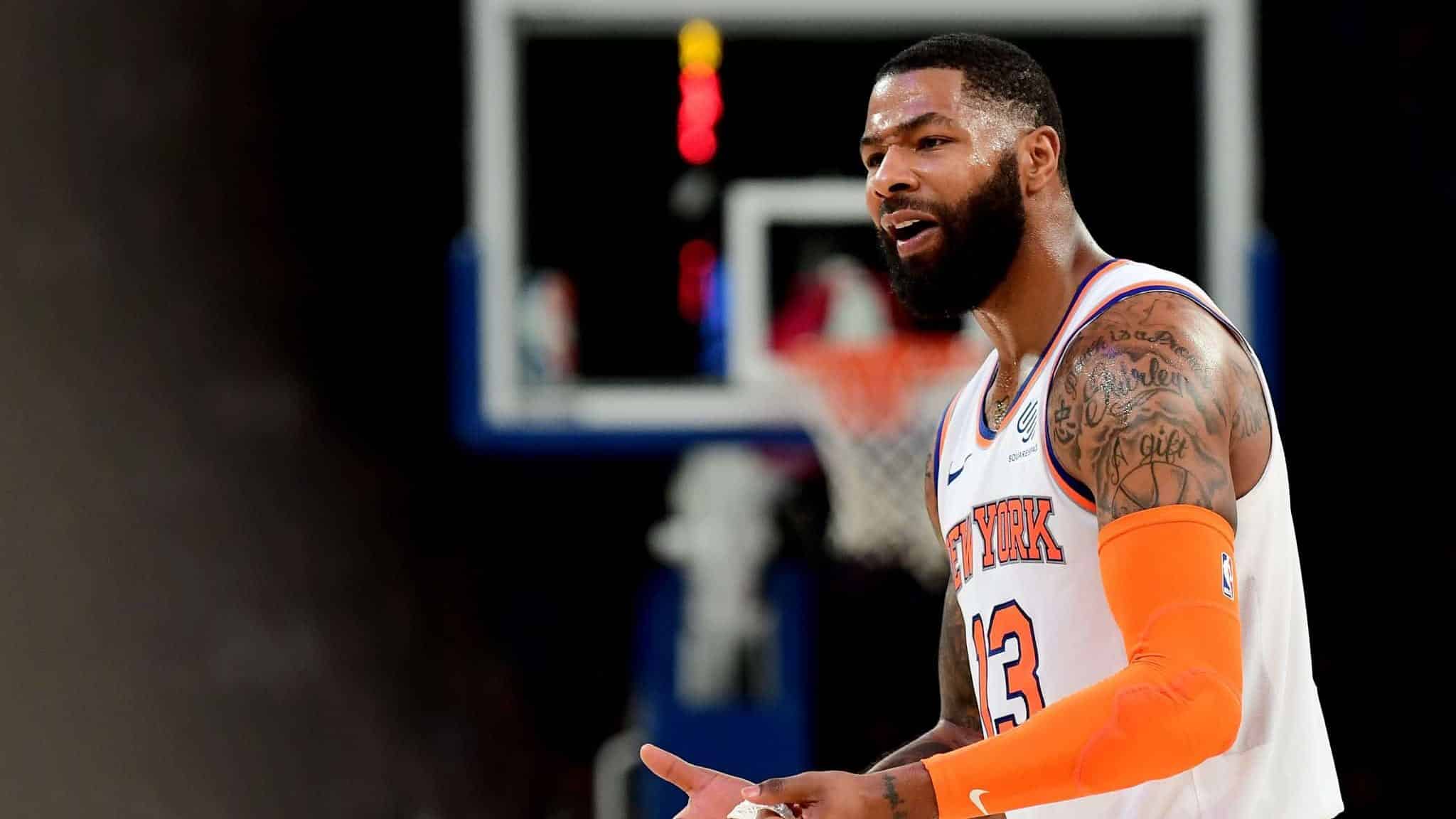 Veteran stretch forward Marcus Morris has been the one bright spot for the New York Knicks this season. While the Knicks are again struggling to rack up wins this season, Morris has taken advantage of the opportunity to be the main scorer for the squad. The 30-year old forward is putting up a career-high 19.1 points per game, on top of his 5.5 rebounds and an excellent 47% clip from three-point territory. The spike in Morris’ efficiency and production has led to rumors that he will garner a high level of trade interest from playoff-contending teams.

Among the teams speculated to have been keeping tabs on the stance of the Knicks organization in moving Morris are the Los Angeles Lakers and the Los Angeles Clippers. Morris’ versatility on offense will give both teams the much-needed firepower and flexibility in their schemes. However, Yahoo Sports’ Vincent Goodwill recently quashed these rumors, saying that the Knicks front office are not inclined on shipping Morris before the trade deadline.

“Knicks forward Marcus Morris Sr. is a hot name around league circles for so many reasons, but the Knicks have no plans on trading him, a source told Yahoo Sports.”

As for the reason why New York will not pull the plug on Morris, it is quite mind-boggling. They only signed the vet to a one-year deal last summer, which means that Morris will again enter unrestricted free agency this coming offseason. Moreover, the Knicks have little to no chances of entering the playoffs. They are sporting a 10-27 win-loss card, and are sitting on the 13th spot in the Eastern Conference.

On top of those arguments, Morris could net them some excellent assets that can help bolster their rebuilding process. SNY.tv’s Colin Martin and Ian Begley reported that the Knicks could even demand for a first-round draft pick for the services of their combo forward.

“As far as a trade market for Morris, several teams continue to say that the Knicks should be able to get a late first-round pick in return for the veteran forward. The New York Post reported that the Sixers have interest in Morris. Opposing teams expect other contenders like the Clippers and Lakers to feel out the market for Morris as well. The issue for the Knicks will be matching salaries, as Morris is making $15 million this season.”

So there is the reason why the Knicks are holding back on shipping Morris. With Marcus earning a $15 million salary for this year, that means that the Knicks should be willing to take in a player or players that will amount to that $15 million earning. The Knicks wouldn’t want to take in salaries that will go beyond this season as they are obviously positioning themselves as big-time players for the stacked 2021 free agency class.

Still, many believe that the Knicks will figure in a trade deal or two before the deadline next month. Young athletic point guard Dennis Smith Jr has been pushed back to the end of the team’s rotation, leading to speculations that he might want to play for a new team. Also, the team’s recently-acquired veterans have been expendable this season. Veteran shooting guard Wayne Ellington and combo big man Bobby Portis are also expected to gain trade interest around the league.

Warriors could flip Simmons for Russell

Ever since the Golden State Warriors shocked everybody when they agreed to a sign-and-trade deal to land All-Star point guard D’Angelo Russell, there was already a growing belief that the Dubs will be using the lefty scorer as a very valuable trade asset in the future. When Stephen Curry and Klay Thompson return from their respective injuries, questions of how Russell will fit in the backcourt will certainly arise.

With that said, Russell’s name has been brought up in trade rumors numerous times this season. The 23-year old star is certainly a player capable of steering a franchise to greater heights. We saw how he grew and matured as a leader of the Brooklyn Nets team that surprised a lot of people when they made the playoffs last season. But Russell has not improved his production this season, mainly because he has been hounded with consecutive injuries.

While D-Lo will absolutely rise up to the rank of the most-sought player if the Warriors put him on the trading block, the team could wait for his value to really increase next summer. The free agency class next offseason is very shallow. Anthony Davis, the top prize of that class, is almost certain to re-sign with the Lakers considering their enormous success this year. With nothing to take from free agency, teams desperate for more success will turn to the trade market to turn their fortunes around. The Dubs can take advantage of that fact, as Russell’s value is projected to reach its peak at that stage.

Marcus Thompson II of The Athletic also believes that the Warriors will hold back in shipping Russell mid-way through this season. But Thompson also wrote that there is a growing possibility that the Warriors can net Philadelphia 76ers’ point forward Ben Simmons in exchange for Russell’s services.

“But what can they get for Russell? The Warriors are going to want something really good for Russell if they are to part with him before they get him on the floor with Curry and Thompson. But what is that?

One of the interesting possibilities I’ve heard being kicked around is Russell for Philadelphia’s Ben Simmons. The 76ers could use a point guard who can score and run the show — and shoot. Some believe the pairing of Simmons and big man Joel Embiid isn’t viable in their pursuit of a championship. Simmons, as one source told me, is probably the best player the Warriors could possibly get for Russell, just considering the needs of the Warriors and their potential trade partners.”

Simmons, 23, is norming averages of 14.9 points, 7.5 rebounds, 8.6 assists and 2.2 steals per contest this season. His versatility on defense and excellent playmaking have been huge factors of the Sixers’ turnaround in the past couple of years. However, his glaring weakness still lies on his ineffectiveness in the long-range. With Joel Embiid already occupying the paint in the Sixers’ offensive plays, Simmons is almost no use for the team when he is off the ball.

If the Warriors pursue this course, they will have a huge decision to make on their frontcourt. Draymond Green, their long-tenured two-way power forward, arguably has the similar type of game with Simmons. It would be very difficult for the two playmakers to co-exist in the same court, especially considering that neither one has a consistent shot from beyond the arc.

Aside from D-Lo, Thompson also wrote that recently-acquired athletic center Willie Cauley-Stein could also become a trade asset for the Warriors.

“Willie Cauley-Stein is another trade option. However, there are questions about his value on the open market. He has a player option, so the Warriors don’t have control over him next season. There is also still interest in seeing how he fits when the real team is healthy. Being on the floor with Stephen Curry, Klay Thompson and D’Angelo Russell has a way of making most big men look better. And Cauley-Stein has improved from his earlier struggles.”

Cauley-Stein, who is in his fourth year in the league, is currently the starting center for the Dubs. He has bounced back from his inefficient production at the early part of the season, and is putting up decent averages of 8.1 points, 6.2 rebounds, 1.2 steals and 1.4 blocks per contest. A mobile, high-leaping big man who can impose his presence on both ends of the floor, his ability to run to the rim and catch lob passes on the fly should bode well for him when Curry comes back from his long layoff due to a severe wrist injury.