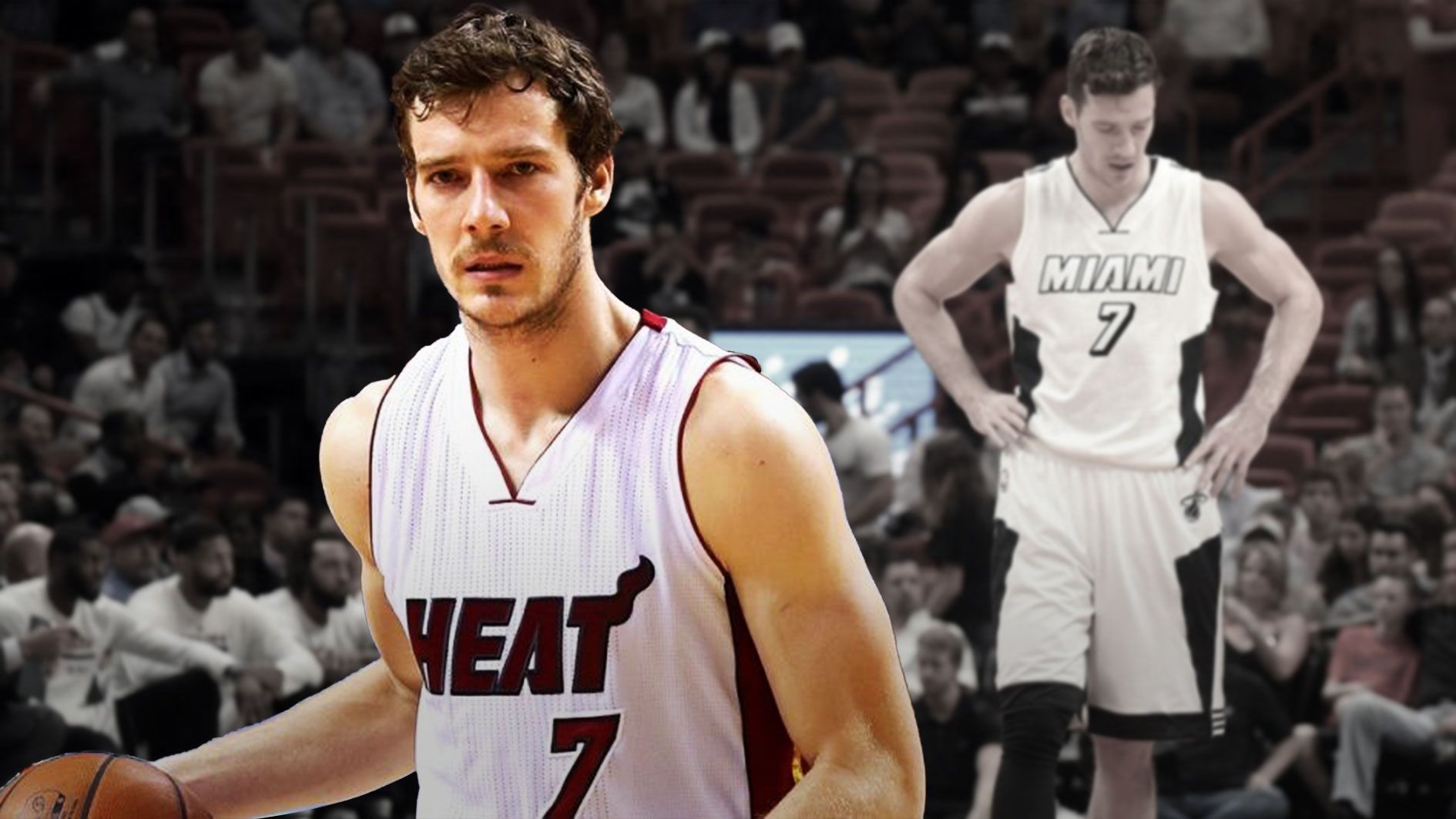 Speculations have it that the Los Angeles Lakers are the heavy favorites to land superstar forward and two-time Finals MVP Kawhi Leonard. However, you can never be sure on anything in the NBA. With a possibility of losing out on Kawhi looming for arguably the most-pressured franchise in the league right now, engaging the Miami Heat for a trade with starting point guard Goran Dragic should be a legitimate option for the Lakers, per ESPN’s Bobby Marks.

“The Kawhi Leonard decision could impact how this trade unfolds. The Lakers could certainly enter into the equation for Dragic if they miss out on Leonard.”

The Lakers are obviously confident of their chances on combining Leonard with superstars LeBron James and Anthony Davis. With the best quality role players in the market already committing to other teams, the Lakers have apparently risked it all to chase the services of arguably the best two-way superstar in the league.

Dragic, 32, averaged 13.7 points, 4.8 assists and 3.1 rebounds per game last season. While his scoring average was his lowest since the 2011-12 season, he is still a capable shot creator, a decent playmaker and a 36% career three-point shooter. Dragic hasn’t always been a ball-heavy point guard as he has established his scoring nature on off-ball opportunities. That alone would bode well with LeBron’s playmaking and AD’s post play.

Dragic almost found himself with a new team just a couple of days ago. With the Heat securing Jimmy Butler through a sign-and-trade deal with the Philadelphia 76ers, the Dallas Mavericks entered the picture as the third team. Reports all over the social media said that Dragic is headed to the Mavericks to play with fellow Slovenian player Luka Doncic, stirring up quite an interest on how stronger Dallas would be next season. However, that potential trade soon crumbled as the Heat veered away from Dallas and discussed another scenario with Philly, the Los Angeles Clippers and the Portland Trail Blazers.

To sum it up, Dragic is still in Miami although he and the Heat front office are currently gauging the market for a trade partner. While there would be a number of teams interested in trading for Dragic and his expiring contract, many expect the Lakers to come swooping in to nab the lefty scoring point guard, per Christian Rivas of SB Nation’s Silver Screen & Roll.

“If the Lakers can offer Talen Horton-Tucker and a second-round pick in exchange for   Dragic and his $19.2 million contract, that would be a home run for them. Is Dragic worth the $19.2 million he’ll be paid this upcoming season? Maybe not, but the gap between him and the best available point guard in free agency is the size of an island.

Plus, trading for Dragic would leave the Lakers with roughly $12 million in cap space, enough to make a competitive offer to one of Danny Green or Marcus Morris, two players that would help Los Angeles in a big way. They’d also have the room exception worth $4.72 million, which could be enough to bring back Kentavious Caldwell-Pope for another season, seeing as there’s little-to-no market for him.”

Dragic’s $19.2 million contract will expire next year so the Lakers shouldn’t worry about their financial flexibility after next season. Among the top remaining point guards still available in free agency are Rajon Rondo, Alex Caruso, Tyus Jones, T.J. McConnell and Quinn Cook. None of those names packs the unique skill set necessary for a guard to blend well with LeBron, something that Dragic already has. The Lakers have also brought in veteran shooters Troy Daniels and Jared Dudley to the mix this summer, so it’s safe to say that they have already learned a lesson from their mistakes in the previous offseason.

Arguably one of the most forgotten superstars in the league last season, Cleveland Cavaliers star big man Kevin Love will finally enter next season in full health. With that said, the Cavaliers front office are expecting teams to come calling for Love’s services, per Steve Kyler of Basketball Insiders.

“They seem really open to trading Kevin Love... not sure who takes his contract. That's going to have to be someone with real space missing on guys.”

However, moving Love’s four-year, $120 million contract wouldn’t be that easy for the Cavaliers. With Love’s declining age and injury history, this would almost be a salary dump for the Cavaliers with them expecting draft picks or young assets in return. Joe Vardon of The Athletic cited two sample scenarios on how the Cavaliers can trade their All-Star big man.

“Now that the Cavs are in the throes of a rebuild, perhaps they would be more open   to a trade that clears Love’s salary and nets future assets. The Celtics, who are  likely to lose Horford in free agency, could change gears and look at Love if they     strike out on Walker or Russell, for instance. Boston still has future draft picks it can dangle in a deal. The defending champion Raptors, who are waiting to see what happens with Leonard before they decide whether to rebuild, retool around him or bring back the same team, could send Marc Gasol’s contract (which is expiring) for Love, who is not the defender Gasol is but is younger and quicker and spreads the floor. These are hypothetical examples.”

Of course, we could already cross out the Celtics on that list. They have pulled off a stunner by winning the Kemba Walker sweepstakes, and they have acquired center Enes Kanter to man the frontline along with Daniel Theis and Robert Williams. Along with the Raptors, one team that could enter the Kevin Love sweepstakes could be the Oklahoma City Thunder, per Jordan Zirm of Uproxx.

“A team with Russell Westbrook and Paul George shouldn’t be bowing out of the playoffs in the first round, but that’s what happened to the Thunder in the last two   postseasons. Love not only adds a presence to play through in the post and stellar    passing ability, but his ability to step out and hit the three would give Westbrook and George the spacing they desperately need to operate at full capacity.”

A combination of Westbrook-George-Love would indeed be intriguing for the Thunder, but it’s difficult to imagine what assets the Thunder could offer to entice the Cavaliers to a deal. The Thunder can flip starting center Steven Adams to Cleveland, although the Cavaliers already have a defensive-oriented big man on the roster in Tristan Thompson.

Love, 30, is coming off an injury-riddled year that saw him play only 22 games. The five-time All-Star was still able to put up a double-double stat line of 17.0 points, 10.9 rebounds and 2.2 assists.

It has been a start of free agency for the Minnesota Timberwolves after they missed out on signing All-Star point guard D’Angelo Russell. It was almost a done deal for the Wolves until the Golden State Warriors worked out another charm and nabbed Russell through a sign-and trade deal with the Brooklyn Nets. Before Russell signed with the Warriors, the Wolves actually approached the Nets for a deal that would send Russell to Minnesota and Andrew Wiggins to Brooklyn. Obviously, that didn’t work out and it might set a precedence as to how difficult it is for Minnesota to move Wiggins’ bloated contract.

However, former Minnesota player and head coach Sam Mitchell believes that there’s still hope for Wiggins in being successful with the Timberwolves. Mitchell says that moving Wiggins to the shooting guard position would create mismatches that would benefit the Wolves, per Joe Nelson of Bring Me The News.

"To me, he's out of position. He's a 2-guard. You gotta move him to the 2-guard because the NBA is all about matchups and advantages. When you put him at the 2 he has size and height advantage, and wingspan advantage. When you play him at the 3, he's undersized as a small forward."