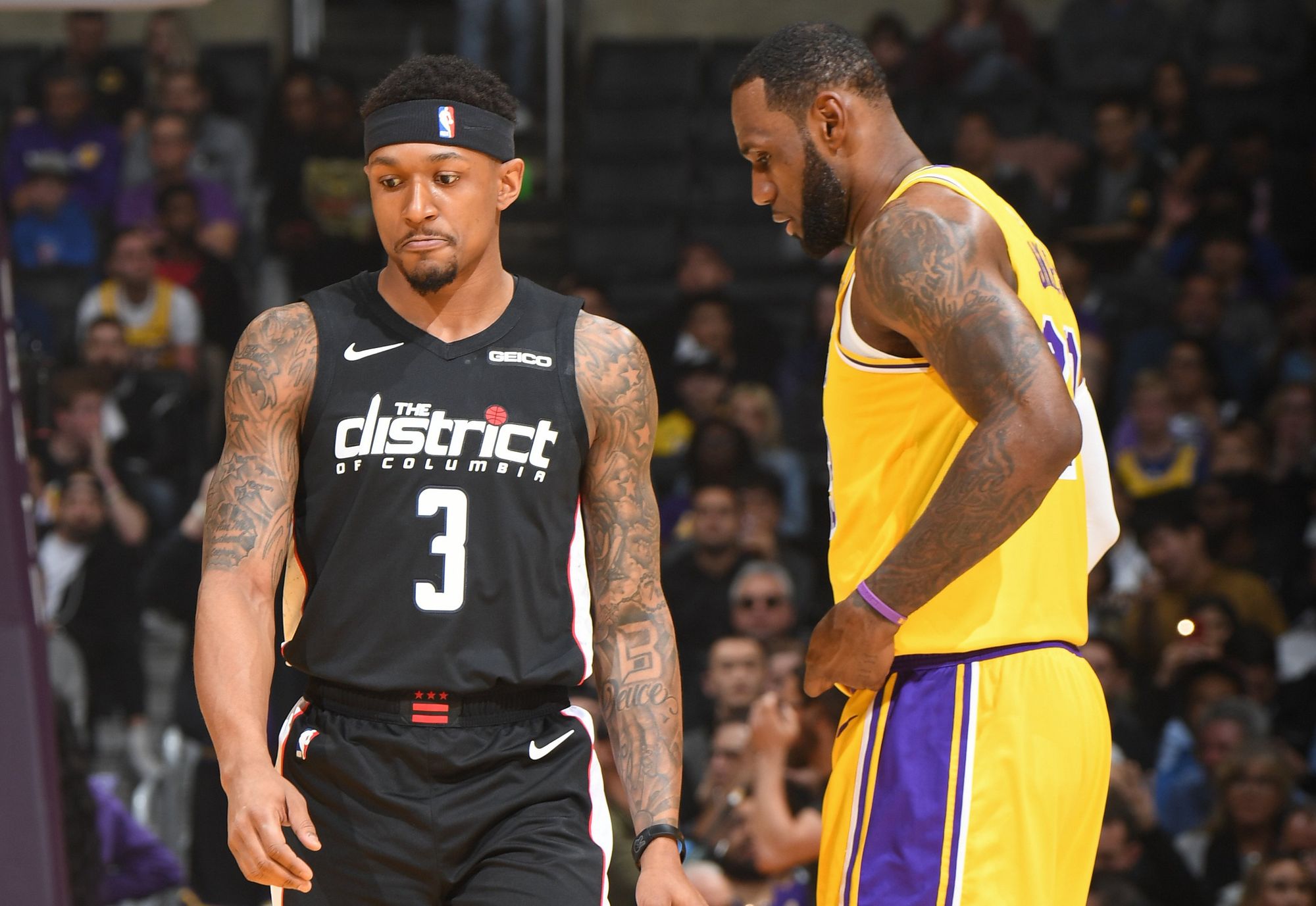 It is of no contention that the Los Angeles Lakers will be the most pressured team to deliver some goods in the upcoming offseason. With LeBron James missing the playoffs for the first time since the 2004-05 season, the Lakers cannot afford to create another bonker of a supporting cast around the 34-year old superstar. Sean Deveney of the Sporting News recently reported that the Lakers top brass, headed by general manager Rob Pelinka after the abrupt exit of Magic Johnson, are set to pursue some top-tier names in the summer.

“The Lakers have other players they're targeting in trades, according to league  sources. Chief among them is Wizards guard Bradley Beal, though with the Wizards not yet hiring a front office honcho, no decision has been made whether to trade Beal. But LA will be in position to make an attractive offer if Beal is put on the  block.

There's also interest in point guard Kyle Lowry, who could be available if the   Raptors lose Kawhi Leonard in free agency. Because of Lowry's age (33) and contract   ($33 million for next season), the Lakers could bring him in for a relatively limited outgoing package.”

Deveney also mentioned that Derrick Favors of the Utah Jazz is also a potential target for the Lakers, though it is still unknown if the Jazz will exercise their team option on Favors next season. If they don’t, the Lakers could try to negotiate a deal with Favors, especially considering the fact that their frontcourt players such as Javale McGee, Tyson Chandler, and Mike Muscala are entering unrestricted free agency this summer.

Beal has been widely sought after by teams before the February trade deadline this year, but the Wizards opted to keep him and resist any potential deals for the All-Star shooting guard. Arguably the less-heralded player of the Wizards’ formidable backcourt duo alongside point guard John Wall, Beal has grown to be a franchise player this season, leading Washington with impressive numbers of 25.6 points, 5.0 rebounds, 5.5 assists and 1.5 steals per game. With Wall sidelined by a major injury, the 25-year old combo guard proved that he isn’t just a spot-up shooter anymore, and he can effectively run a team by becoming its primary scorer and playmaker.

However, the Lakers would go at lengths to pry Beal away from the Wizards as the latter have obviously denied trade deals for their star, and have viewed Beal as their franchise cornerstone. A package for Beal should not be as strong as the one they offered to the New Orleans Pelicans for the services of Anthony Davis, but it could be assumed that the Lakers should give up a couple of their young guns in Lonzo Ball, Brandon Ingram and Kyle Kuzma to make the deal enticing for Washington.

Still, it’s quite surprising that the name of Lowry has been included in these set of trade rumors. We have expected shooters and gunners to be the priority of the Lakers as LeBron’s playmaking brilliance is already enough for him to be considered as the point guard of the team. But Lowry has proven year after year that he can play alongside ball-needy superstars like DeMar DeRozan and Kawhi Leonard. Even though his usage rate has gone down this season particularly because of Leonard and the emergence of Pascal Siakam, Lowry is racking up a career-high in assists with 8.7 dishes per contest, and is still effective from beyong the arc with a 35% shooting clip. The only downside is that Lowry is already 33 years old, arguably past the peak of his physical abilities. But one upside that could attract the Lakers to pursue the veteran point guard is that he has just one year left on his contract beyond this season so the team could offer just a mid-tier package to Toronto.

Mike Conley has long sought for a trade from the Memphis Grizzlies since January this year, but both parties agreed to extend their partnership for the rest of the season and continue negotiating with trade partners in the summer. The Utah Jazz has been one of the teams reportedly interested in Conley’s services this season, and they will still be expected to the frontrunners in the offseason. But Deveney also mentioned that other teams have joined the fray – among them the Miami Heat, Indiana Pacers and the Dallas Mavericks.

“League sources told Sporting News this week that one team to watch in the Conley hunt is Miami, which is waiting on Goran Dragic's decision on his $19 million player option for next year. Heat president Pat Riley has long coveted Conley - Miami was   interested in signing Conley before he re-signed with Memphis three years ago - and still wants to bring him to South Florida.

The Pacers have also been rumored to be a team interested in Conley, but a source  noted that the Pacers want to bring back some combination of their free-agent players and that Conley's contract would be too weighty on the payroll.

One last potential suitor is the Mavericks, who would like to be a player in free  agency but are wary that some of their top targets - Khris Middleton, Tobias Harris - increasingly look as though they'll re-sign with their current teams.”

The Heat will enter the post-Dwyane Wade era of their franchise next season, and are set to target some cornerstones for the team’s success in the years to come. While there is a greater chance that Dragic will opt for his player option of $19 million as he won’t get that large amount of money anymore if he enters free agency due to age and dipping numbers, the Heat could still use the Slovenian spitfire guard as a trade bait. Dragic is still a formidable offensive threat, and his expiring contract will be an attractive factor. Conley’s tough style of play will be a fit in the Heat’s highly-esteemed system and culture, and there is a high possibility that he would re-sign with Miami beyond next year.

As for the Pacers, the point guard position has been one of their weak spots in the past couple of years with Darren Collison mostly running the show for the team. Star shooting guard Victor Oladipo has shown flashes of effective playmaking in his game, but it could also be expected that the former Indiana Hoosier will miss a significant part of the 2019-20 season due to a major leg injury. Conley could very well run point for Pacers head coach Nate McMillan’s system.

Although the Mavericks could show considerable interest for Conley in the summer, they don’t have an interesting trade package as compared with what the Heat and Pacers could offer. Aside from that, the team already has an excellent ball-handler in Luka Doncic, and they would definitely put more priority on acquiring a talented perimeter player in the offseason.

Ntilikina denies desire to be traded

While numerous reports have it that New York Knicks young point guard Frank Ntilikina has issued a trade demand in the offseason, the Frenchman’s new agent Bouna Ndiaye says that there’s no truth in that speculation, per Marc Berman of the New York Post.

Ndiaye denied to The Post speculation Ntilikina, who is currently in France,           changed agents because of his status or that he wants to be traded.

“I can just tell you that the fact he was not traded has nothing to do with this change of agent,” Ndiaye said. “Frank is extremely happy to be part of the Knicks.”

Ntilikina was viewed by the Knicks as a potential two-way type of point guard for the team, as the 20-year old baller possesses the length and instincts to be a major factor on the defensive end. But the 6-foot-6 guard has largely disappointed with measly averages of 5.9 points, 3.1 assists and 2.0 rebounds per game in his first two years in the league. Ntilikina has also failed to improve on his perimeter shooting, making just a very low 29% clip from three-point territory, resulting to the decline in his minutes and role this season.