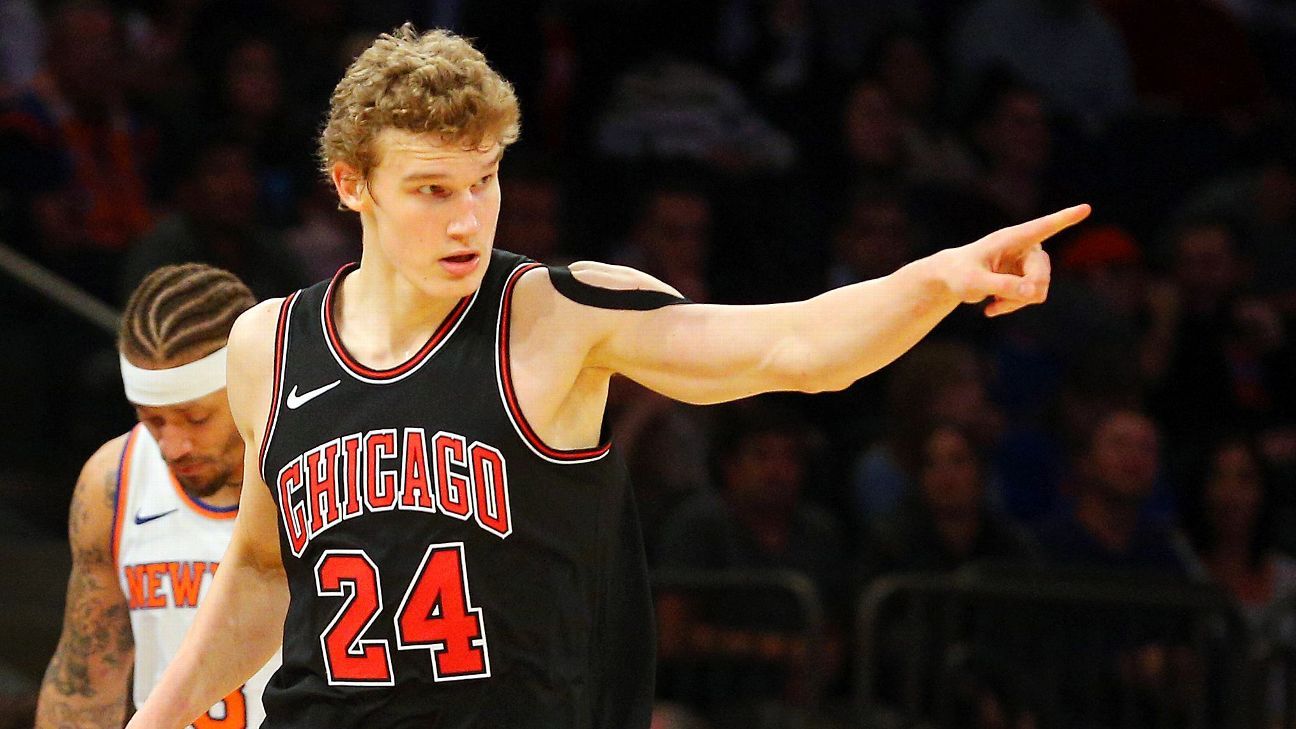 Finnish sweet-shooting power forward Lauri Markkanen is starting a new chapter in his very young NBA career. Markkanen, who struggled with injuries and shooting percentages for much of the past couple of seasons, will be suiting up for the Cleveland Cavaliers next year. As per Senior NBA Insider Adrian Wojnarowski, he reported that the Cavaliers have figured in a three-team trade that will allow them to acquire the services of the seven-foot stretch big man.

The other two teams participating in the deal are the Chicago Bulls and the Portland Trail Blazers. These two teams are also lobbying for a playoff spot next season, and there is no doubt that they have tons of expectations moving forward.

The Cleveland Cavaliers have acquired Chicago Bulls restricted free-agent forward Lauri Markkanen as part of a three-team, sign-and-trade agreement. Cleveland is signing Markkanen to a four-year, $67 million contract, sources told ESPN. The Cavaliers are sending forward Larry Nance Jr. to the Portland Trail Blazers and a 2023 second-round draft pick via the Denver Nuggets to Chicago in the trade. Portland trades forward Derrick Jones Jr. and a lottery-protected 2022 first-round pick to Chicago, sources said.

Markkanen, 24, had been searching for a new home as a restricted free agent, and he arrives with a reshaped Cavaliers lineup that includes No. 3 overall pick Evan Mobley and center Jarrett Allen, owner of a new $100 million contract extension. The Bulls acquired San Antonio's DeMar DeRozan in a sign-and-trade this summer. Markkanen averaged 13.6 points and 5.3 rebounds for the Bulls last season.

With Markkanen going to the Cavaliers, it remains to be seen how the team’s rotation will shape out, especially in their frontcourt. Markkanen, who is coming off a season in which he logged in 25.8 minutes per game while norming a stat line of 13.6 points, 5.3 rebounds, 0.9 assists, 0.5 steals, and 0.3 blocks, will add to the Cavaliers’ bevy of frontcourt players. The Cavaliers already have three excellent big men on their roster, including the up-and-coming Jarrett Allen, veteran star Kevin Love, and the prized rookie Evan Mobley.

Allen has just signed a new contract extension with the team that will be worth $100 million for five years. Love’s current four-year, $120 million contract will last until the 2022-23 season. Mobley, the third overall pick during the 2021 NBA Draft, will certainly need to see a significant amount of playing time next season. Mobley is a big man with a unique skill set on both ends of the floor, and the Cavaliers coaching staff will have to give him a lot of minutes to really develop his talent and realize his potential.

So how will the Cavaliers distribute the playing time to their three big men? The NBA has moved into more of a positionless, small-ball line-up these days, which will prove to be a problem for the Cavaliers if ever they would want to slot in Markkanen in the small forward position. Markkanen is a good outside shooter, despite his struggles in the past couple of years, but he is too slow to defend in the wing, much more if he has to switch onto quicker and smaller guards.

Obviously, this is a move that the Cavaliers are making to gear up for their future. Love could be the odd man out here as the team pin their hopes on rebuilding the frontcourt around Markkanen, Nance, and Mobley. As per Zach Harper of The Athletic, he said that he is seeing a potential in how Markkanen can fit in nicely with either Nance or Mobley on the Cavaliers’ frontcourt depth.

This is where I really wonder if the Cavs are doing the right thing. They’re essentially trading Nance for Markkanen, and then obviously giving the contract on top of that. Cleveland was awful on both ends of the floor last season — third-worst offense, sixth-worst defense. Despite positive performances from Collin Sexton and Darius Garland throughout the season, the Cavs flat-out couldn’t  score as a team. Markkanen should help that considerably. He’ll be in a rotation (for now) with Jarrett Allen, Evan Mobley and Kevin Love. Love probably won’t be heavily involved unless they’re hoping to showcase him. That isn’t going to work.

Markkanen fits nicely with Allen and/or Mobley. Those two can handle the defense, and he’ll provide some much-needed spacing on the perimeter. Plus, he can go get buckets all over the floor. The Cavs had the second-worst effective field goal percentage in the NBA at 50.8 percent. Markkanen put up a career-best 59.4 percent eFG last season. He was having a great year scoring the ball prior to   the Vučević trade. He scored 17.7 points per game, which would have been the  second-best output of his career while giving the Bulls 48.2/39.0/83.6 shooting splits. After the Vučević trade? He dropped to 10.3 points per game on  47.7/41.7/80.6 shooting splits. Chicago just didn’t use him much at all because he didn’t fit next to Vučević.

For the Blazers, getting Nance will certainly be a big boost for their roster. Nance is versatile enough that they can plug him in any kind of line-up they have. During the early stages of his career, Nance was more of a rim-running big man who relies heavily on his athleticism to make plays on both offense and defense. Nance, who logged in a career-high 31.2 minutes per contest last season, also put in a decent stat line of 9.3 points, 6.7 rebounds, 3.1 assists, 1.7 steals, and 0.5 blocks.

Nance also shot a good 36% clip from the three-point line, and his playmaking as a big man has improved a lot in the past couple of years. The Blazers failed to land another game-changing star in the offseason, but it is also true that the Nance acquisition will improve them a bit at least for the next season. The Blazers let go of the high-flying Derrick Jones Jr., who is in himself a good role player. However, Jones failed to crack a consistent spot in the rotation last season, and there were already doubts on whether he is still a part of the future of the Blazers for the next year.

While it is true that the lottery-protected first-round pick that they gave up could prove to be costly, getting Nance will certainly be worth it. As per the same column written by Harper for The Athletic, he pointed out that while the Blazers will miss the services of Jones as a wing defender, Nance will provide a much-needed presence on their depleted frontcourt depth. Harper mentioned that before the Nance acquisition, the Blazers only had two natural centers in Jusuf Nurkic and Cody Zeller, along with a small-ball center Robert Covington, who only stands at 6-foot-8.

For what Portland is giving up here, the Blazers are getting great value with Nance joining the roster. Forward position is a big hole for the Blazers. Their big men consist of Jusuf Nurkic, Cody Zeller, Robert Covington and maybe second-round  pick Greg Brown. That’s it. As much as you can like what Derrick Jones Jr. tries to bring to the table as a wing, Nance gives you more in pretty much every area. He’ll help defensively one of the worst defenses in league history. He’ll allow them to play big or small at times. He can be a great roll man for Lillard or CJ McCollum. Nance sets good screens, which can help that backcourt or Norman Powell get free to light up the opposing defense.

Nance has this season and next season left on his deal at roughly $20 million total, then he becomes a free agent in 2023. That means they get plenty of time to make an assessment on his future. Or if things start to fall apart in Portland, the Blazers can always move him to just about any team and get some decent return. Giving up a protected first-rounder isn’t ideal, but at least it’s lottery-protected for now. So the Blazers can make the playoffs with peace of mind, and somehow missing them wouldn’t destroy them from this trade.

The other team in this deal are the Bulls, who gave up Markkanen after a solid showing in his first two years with them. Markkanen, along with Zach LaVine, was slated to be a centerpiece for their future but his relationship with the Bulls front office and coaching staff has turned sour in the past couple of seasons. On top of all these, the Bulls also did not want to pay a lot of money for Markkanen, who has now signed a multi-million contract with the Cavaliers.

The Bulls got a solid veteran wing in Jones, who could potentially be one of their best perimeter defenders next season. However, it remains to be seen if he will be able to slot into the starting line-up for the Bulls, especially with the upcoming sophomore forward Patrick Williams showing some real potential. Still, Jones will be a solid addition for the Bulls, especially with all the things that he brings to the table in terms of his skill set on the defensive end of the floor.