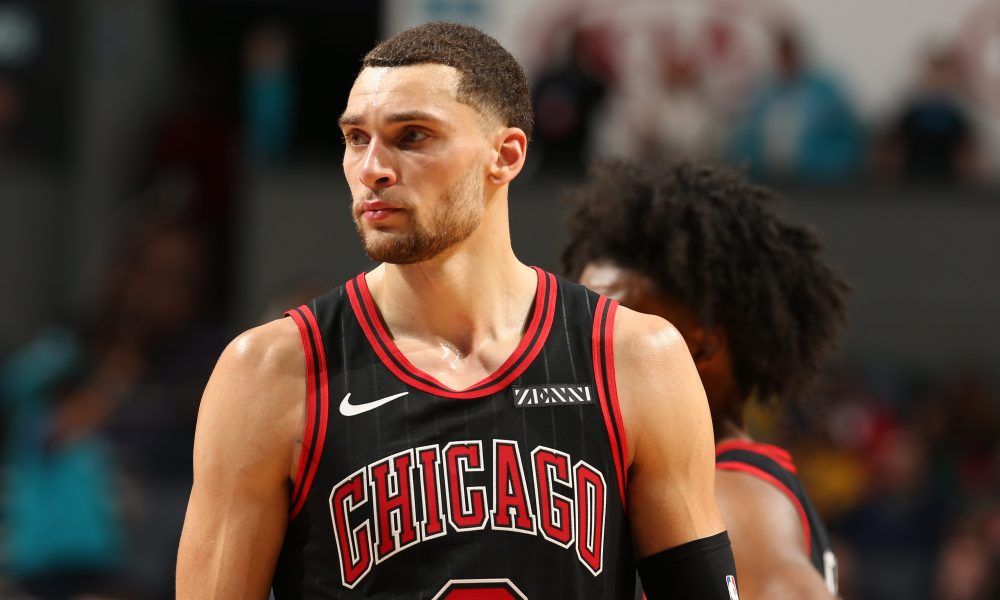 Will the Bulls front office let go of their young star shooting guard?

The New York Knicks and the Brooklyn Nets are both looking for a star player to add to their roster, and it could be in the name of Chicago Bulls high-flying young star Zach LaVine.

SNY’s Ian Begley wrote a column that mentioned both teams’ growing interest in the trade availability of the 25-year old shooting guard. Begley said that the Knicks and the Nets are hoping that the Bulls might end up considering putting LaVine on the trading block.

“The 2021 free agency class is formidable. If you include players with player options    for either 2020 or 2021, the list of free agents next summer (or fall) includes Giannis Antetokounmpo, Anthony Davis, LeBron James, Kawhi Leonard and Victor Oladipo. The potential free agent class of 2022 is strong, too. Players who could be free agents that summer include Paul George, Bradley Beal, Zach LaVine, Aaron Gordon and Jrue Holiday.

We bring that up because those players are more likely to be traded than a player like Mitchell or Booker. And it’s worth noting that both the Knicks and the Nets are among the teams who have been monitoring LaVine’s situation in Chicago. Per SNY sources, both teams have done background work on LaVine to be prepared for the possibility that Chicago ends up listening to trade offers on the 25-year-old guard.”

This may look a bit of a long shot on paper, but it’s no secret that LaVine and the Bulls are not on an excellent working relationship right now. Despite putting up career-highs of 25.5 points, 4.8 rebounds and 1.5 steals per contest this season, the Bulls had a mess of a campaign this year.

Those issue arguably have something to do with the fact that the Bulls players don’t exactly see eye-to-eye with head coach Jim Boylen. Even with the team’s recent hiring of their new executive vice president of basketball operations Arturas Karnisovas, there is still no concrete answer to Boylen’s future with the Bulls.

Still, there is a bit of hope that the Bulls front office could balance both sides and retain LaVine and Boylen for the long run. K.C. Johnson of NBC Sports Chicago emphasized that the team management is currently doing a better job instilling a player-first atmosphere within the organization.

“Zach LaVine came to Chicago two weeks ago for some workouts. Since then, building blocks like Markkanen, Wendell Carter Jr. and Coby White have been coming in regularly. So have Chandler Hutchison, Shaq Harrison, Ryan Arcidiacono and Luke Kornet. Otto Porter Jr. has been in town, and the new regime has been in contact with Tomáš Satoranský, who plans to practice with the Czech Republic national team according to reports from his native country.

Karnisovas and Eversley have said they plan to create a player-friendly franchise, and LaVine and Thad Young both have praised their communication and transparency. Any negative player feedback regarding Boylen, which on Monday featured a jab from backup center Daniel Gafford as he streamed himself playing video games, it seems management is trying to offset by creating a positive, inclusive             atmosphere.”

If that is the case, then how would the Bulls build up the roster moving forward? With a lowly record of 22 wins against 43 defeats this season, they surely have a spot in the lottery on this year’s draft. A shot at landing in the Top 5 is a long shot, but there are plenty of versatile players in this class. It’s a batch that may not boast tons of star potential, but it is brimming with young talented guys who could be excellent role players in the future.

They may also build up through free agency, but Chicago is not exactly a first-choice destination for available star players. Even Scottie Pippen, who won six championships with the Bulls, admitted that the team doesn’t attract that much star power through free agency.

As per CBS Sports’ Michael Kaskey-Blomain, Pippen reiterated that it’s better if the Bulls front office put most of their energy in preparing and scouting young talent in the draft.

Going back to the possibility of a LaVine trade, it’s also speculated that the Bulls could place veteran power forward Thaddeus Young on the trading block. In his first year with the Bulls this season, the lefty versatile forward is norming decent numbers of 10.3 points, 4.9 rebounds, 1.8 assists and 1.4 steals in just 24.9 minutes of play. Young comes with a lot of experience, and there’s no doubt that his Swiss Knife skill set is widely-coveted in today’s pace-and-space type of offense.

Should the Pistons ship out Derrick Rose?

What would be Derrick Rose’s value on a rebuilding Detroit Pistons squad next season? The 31-year old guard will surely serve a mentorship role for the Pistons’ young guns, and he will certainly be a focal point of their offense even if Blake Griffin returns fully-healthy and ready to play.

But would Rose be satisfied playing for a rebuilding squad at this point of his career? The three-time All-Star put in his most productive year since the 2011-12 season, averaging 18.1 points, 2.4 rebounds and 5.6 assists in just 26.0 minutes off the bench for the Pistons.

Having said that, there will be a possibility that Rose would want out of Detroit. James L. Edwards III of The Athletic sees a Rose trade happening in the offseason, especially if the Pistons front office can nab some good assets in return.

“I think the odds are in favor of Rose being traded, but that’s assuming he has a similar season to what he had this past year. I just wouldn’t see the point. Rose will be an unrestricted free agent a year from now, and the Pistons are on a different timeline than the former MVP. If he’s productive and looks as if he can still help a contender, my gut tells me Detroit will trade him for whatever assets it can get.

Now, as all of you know, Rose’s health will play a big part in this. It’s no guarantee that he’ll get to the trade deadline next season relatively healthy, which might make it impossible for the Pistons to trade him. That’s where I’m hesitant to say he’ll definitely be dealt.”

Rose signed with the Pistons last summer, a two-year deal that will net him a total of $15 million. He will be an unrestricted free agent in 2021, so trading for him next season will not put an interested team in a financial string for the long run.

Furthermore, Rose has also shown that he could thrive in an essential role off the bench. If he could do that for the Pistons, he could certainly duplicate that performance for a team seriously contending for the playoffs. Ric Bucher of Bleacher Report recently wrote a column that included a quote from an anonymous Western Conference executive.

“The ask was too great,” the Western Conference executive said. “They totally mishandled that. It was the perfect time to move him. He was the ultimate rental at the trade deadline. You could keep him fresh for the playoffs and still have him next year on a very cap-friendly deal. He (Derrick Rose) would’ve made a first-round playoff team into a second-round team, and he would’ve put the Lakers or the Clippers over the top.”

It remains to be seen if the Pistons will ship him out in the offseason, but the sports community is hoping that Rose will get another serious shot at competing for the elusive championship trophy.