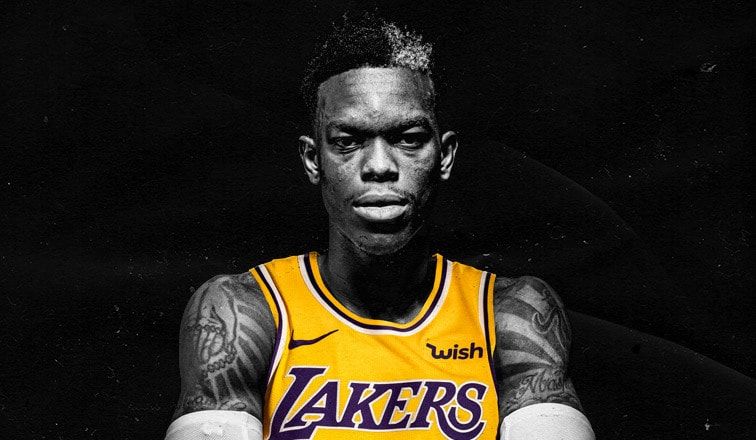 The Los Angeles Lakers appears very determined to defend their title next season, as they have already made a big move ahead of the 2020 NBA Draft. The Lakers have reportedly agreed in principle in a trade that would send Dennis Schroder to Los Angeles in exchange for veteran guard Danny Green and the 28th pick in the upcoming draft. The trade that was made even before the moratorium was lifted came as a surprise to many.

The Lakers were expected to go on a wait-and-see mode on the plans of their free agents this offseason like Anthony Davis, Rajon Rondo, and Avery Bradley. However, the Lakers believe that they need to strike early, hence agreeing to a deal with the Thunder. According to Adrian Wojnarowski of ESPN, the two teams can formally agree to the deal on Monday but will only be consummated after the draft on Wednesday.

"Los Angeles cannot outright send the draft pick to Oklahoma City because there is a rule that restricts teams from trading first-round picks in consecutive years," Wojnarowski said of the deal between the Lakers and Thunder. "Los Angeles sent the No. 4 overall pick in the 2019 draft to the New Orleans Pelicans as part of the Anthony Davis trade. The Thunder already own the 25th pick in Wednesday's draft."

The Thunder reportedly received a lot of interests on Schroder over the past several weeks. Oklahoma City was expected to ask for picks in any trade, as they are likely to enter a full rebuild under new head coach Mark Daigneault. Schroder was one of the best trade assets after the veteran guard had one the best years of his career in the league last season.

Schroder came off the bench for the Thunder behind veteran Chris Paul and young star Shai Gilgeous-Alexander last season, but he did make a huge impact in Oklahoma City. In 65 games for the Thunder, where he only started in two games, 27-year-old guard averaged 18.9 points on top of 4.0 assists and 3.6 rebounds per game. He was the runner-up to Montrezl Harrell in the 2020 NBA Sixth Man of the Year race last season.

According to Wojnarowski, Schroder has made it no secret that he wants to be a starter again in the league despite having a lot of success as a spark off the bench. His desire to start will likely be granted in Los Angeles, which could find themselves in dire need for backcourt help when the free-agency period ends. The Lakers will likely lose veterans Rajon Rondo and Avery Bradley in free agency this offseason.

Schroder also had a lot of success as a starter during his final season with the Atlanta Hawks. In 67 starts for the Hawks during the 2017-18 NBA season, the German point guard averaged a career-high 19.4 points on top of 6.2 assists and 3.1 rebounds per game for the Thunder. One possible risk in the deal is his contract, as he will be playing in the final year of his deal, but the Lakers reportedly intends to keep him in the long run.

Who Won the Lakers-Thunder Trade?

As for the Thunder, John Hollinger of The Athletic is convinced that they made an excellent decision again. The Thunder have been trading productive players for picks over the past several seasons -- like when they dealt superstars Paul George and Russell Westbrook. The trade with the Lakers is no exception, as they acquired another draft pick, and possibly more when they find a taker for Green, who will be a target for title contenders.

"From the Thunder’s perspective, then, this is a scream of a deal," Hollinger said."They get a better player and a first-round pick and still will be able to convert Green into more draft equity sooner or later. In the meantime, now owning picks Nos. 25 and 28 in the first round, the Thunder are in a prime position to move up in the draft should an opportunity present itself."

If the Thunder fail to find an attractive deal for Green, the veteran guard can still be a valuable contributor to OKC, especially if they retain Chris Paul. While Paul has been mentioned in numerous trade rumors, it remains to be seen whether or not the Thunder will find a trade partner because of the superstar's massive contract. The 35-year-old point guard is set to earn around $85.56 million in the final two years of his contract.

Green, who has been well-loved in all the teams that he played for over the past several years, is tagged as good 3-and-D guard alongside Paul and Shai Gilgeous-Alexander, who is projected to the be the new cornerstone of the Thunder franchise. The three-time NBA champion guard struggled mightily during the playoffs but is still considered as one of the best perimeter defenders in the league.

Meanwhile for the Lakers, the deal clearly addressed a need. Rajon Rondo played a huge role for the Lakers during their title run, as he took a lot of playmaking responsibilities from LeBron James. However, Rondo's excellent showing might make him too expensive for the Lakers this offseason, which is why trading for Schroder, who was once dubbed as the "German Rondo" before, makes a lot of sense for the defending champions.

"Scouts and executives from rival organizations have long known of the Lakers’ desire to find another playmaker who can ease some of the burden carried by LeBron James, and to a lesser extent, Davis," Dan Woike of Los Angeles Times reported. "James, Rondo and Davis combined for nearly 62% of the Lakers’ assists during the team’s run to the NBA title. With Rondo set to cash in on his terrific postseason, the Lakers don’t want any more playmaking responsibilities to fall onto James."

According to Sam Quinn of CBS Sports, the trade did not only give the Lakers a younger guard in Schroder compared to Green. It also helps the Lakers save money, which in turn, can be used for upgrades later in the season. Quinn pointed out that the Lakers could have chased a third star on the market, but it would have been very expensive for them and might cost them more assets than what they are about to send to OKC.

"The Schroder trade serves another important function for the Lakers: it saves them money," Quinn said. "While he and Green essentially cancel one another out from a salary perspective, the No. 28 pick would have cost the Lakers around $2 million. Offloading that money means a good deal when it comes to the mid-level exception."

It remains to be seen whether or not the Lakers have more moves up in their sleeves. Before the trade for Schroder surfaced, the Lakers were linked to San Antonio Spurs guard DeMar DeRozan. According to Kevin O'Connor of The Ringer, the Spurs are prepared to part ways with DeRozan, and the Lakers were on of the teams ready to pursue the veteran shooting guard. In fact, DeRozan, who is expected to be mentioned in a lot of trade chatters in the coming days, has already reacted to the reports linking him to the Lakers.

However, it remains to be seen now whether or not the Lakers still have the assets to convince the Spurs. O'Connor reported that Los Angeles was prepared to offer Kyle Kuzma and Green for DeRozan. But now that Green is gone, the Lakers have to be a little more creative to make a room for DeRozan or another player of his caliber. Trading for another marquee player might not come this offseason, but Quinn said that the Lakers should not be counted out later in the season, especially if they somehow keep Bradley and JaVale McGee.

"They'll still have pieces to play with should the need for another trade arise during the season," Quinn said of the Lakers. "Kuzma is still in place. The Lakers still have their 2027 first-rounder to deal. McGee and Bradley represent over $9 million in matching salary. If the Lakers need to pursue an upgrade at the deadline, they'll have the chips to do so."