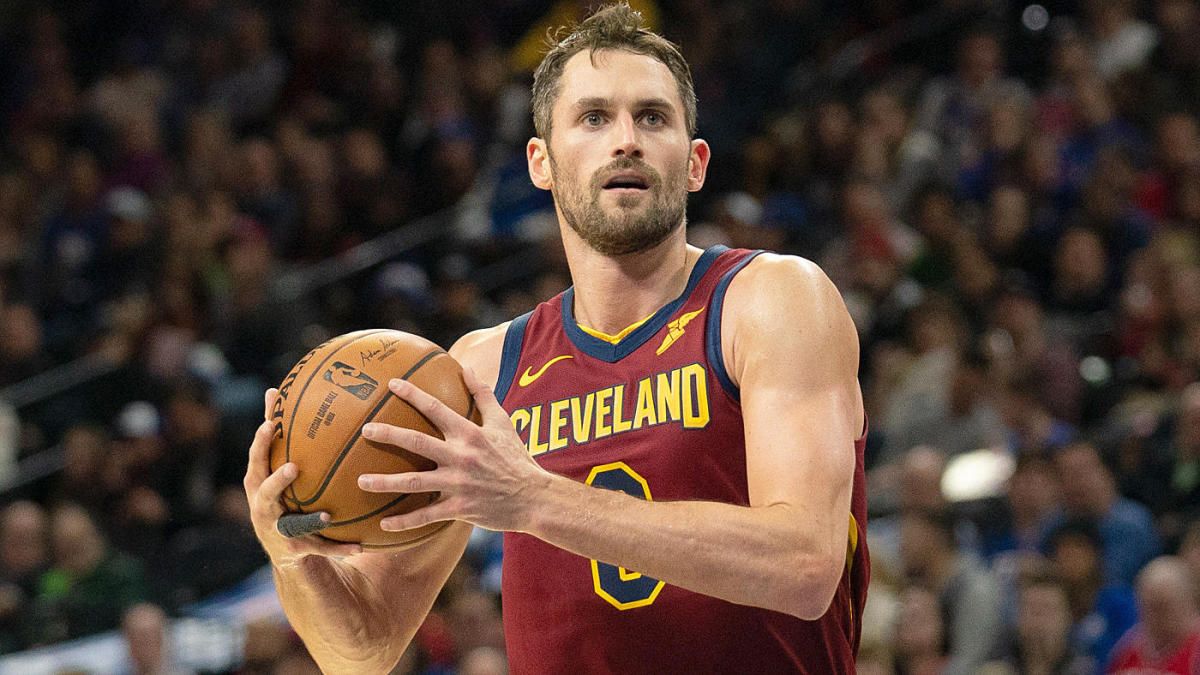 Trade rumors have been swirling around Cleveland Cavaliers big man Kevin Love since last season. The departure of LeBron James ultimately signalled a change in the franchise’s direction, leaving the 31-year old Love in a crossroad. Now, it seems like Love’s relationship with the team’s management has reached a boiling point. The Athletic’s Shams Charania and Joe Vardon recently reported about an altercation between the sweet-shooting big man and Cavaliers general manager Koby Altman.

“Kevin Love had an emotional verbal outburst directed toward general manager Koby Altman following shootaround on Saturday, expressing his displeasure and disgust with the organization, league sources told The Athletic.

Love was screaming in front of teammates and Cavs coaches and front-office  members that there was “no feel here,” league sources said.”

While the former All-Star has been reiterating that he still loves playing with his current teammates, it’s understandable why he is becoming increasingly frustrated. The Cavaliers are yet to enter a full rebuilding mode. However, there are already some signs that they are veering onto that direction. Just a couple of weeks ago, they traded away Jordan Clarkson to the Utah Jazz and received a young, unproven point guard in Dante Exum.

Moreover, it now appears that Love is getting disappointed on how his teammates are playing. During a 20-point loss at the hands of the Toronto Raptors last week, Love was caught in a video throwing punches on his seat at the bench.

“Love was fined $1,000 by the Cavs for an outburst on the bench on Dec. 31 in  Toronto, sources said, and disagreed with the fine. He was spotted by cameras slapping chairs on the Cavaliers bench away from the team huddle in the third quarter of the blowout (see video at bottom). He asked a Cavs coach to take him out of the game so he could cool down. During the next timeout, when a coach asked what was wrong, Love said he didn’t like how selfish the first unit was playing, sources said.”

While Altman has already fined him for the gesture, the issue obviously has not been resolved judging from Love’s verbal outburst during the team’s practice session. A year after receiving a lucrative multi-year extension from the Cavaliers front office, Love is norming averages of 16.6 points, 10.5 rebounds, and 2.9 assists per contest this season. Despite the decline in his production, Love is still one of the most versatile big men we have in the league. He is a top-notch rebounder, an underrated low post scorer and post playmaker, and a deadly shooter from long-range.

Aside from Love, reports have it that the Cavaliers are also trying to shop athletic center Tristan Thompson. The 28-year old big man is producing the best numbers of his career this season. He is putting up 12.6 points, 10.2 rebounds, 2.2 assists and 1.0 blocks per game. His contract will expire after this year, making him a more tradable asset than Love, whose contract will run through 2022. Teams are gearing up for the stacked 2021 free agency class, and taking Love’s contract will rob them of the opportunity to chase big-name free agents that year.

Chris Fedor of Cleveland.com confirmed that teams are indeed interested in engaging in trade negotiations for Thompson.

"Because of Thompson's contract situation, his murky future and the many ways he can help a playoff contender, there's been plenty of chatter about him being dealt ahead of the Feb. 6 deadline, especially if the Cavs get a first-round pick in return."

The Cavaliers are sporting a disappointing 10-24 record this season. At this point, their hopes of a playoff spot should be dimmed to zero chances. They are currently on a two-game losing skid, and they will be embarking on a three-game home stand against the Oklahoma City Thunder, the Minnesota Timberwolves, and the Detroit Pistons.

The Miami Heat has been one of the most surprisingly good teams this season. Though they were already predicted to be a playoff contender in the Eastern Conference, they have climbed to the third seed in the conference while holding an impressive 25-10 win-loss card. Jimmy Butler’s tough play on both ends of the floor has certainly influenced the team’s uprising, while the growth of young guns Bam Adebayo, Tyler Herro, Kendrick Nunn and Duncan Robinson has been a perfect fit to head coach Erik Spoelstra’s system.

Still, Pat Riley and the Heat front office are not known to be an organization contented in their current status. When they acquired Butler last summer, they have made known that they are bent on nabbing another star to catapult them to greater heights. Recent rumors have linked the Heat to potential trades for the services of New Orleans Pelicans star point guard Jrue Holiday and Portland Trail Blazers combo guard CJ McCollum. While nothing is set on stone just yet, the Heat has already made it known that they would not be including Adebayo and Herro in trade talks, per Sean Deveney of Heavy.com.

“The Heat have told inquiring teams that Tyler Herro and Bam Adebayo are    untouchable, according to sources. If that holds true, Miami would either need to find a way to acquire more first-rounders or persuade the Heat to take on a package built around Goran Dragic, Justise Winslow, some combination of Kendrick Nunn and/or Duncan Robinson and a 2025 first-rounder.”

Although Nunn and Robinson have been impressive this season, it will be a bit confusing if the Pelicans acquire both Dragic and Winslow in exchange for Holiday. While Dragic is still producing good numbers especially in the offensive end, he is already 33 years old. His contract will expire this summer, and it will make little sense for the Pelicans to re-sign him. On the other hand, Winslow is a 23-year old prospect who has the potential to be a good playmaker and a great defensive ace. However, the 6-foot-6 swingman has been plagued by injuries this year, and has only appeared in 10 of the Heat’s 35 games.

Still, it would be a great addition if the Heat would be able to acquire Holiday. The 29-year old versatile point guard has reiterated that he wants to compete at this point of his career. Shams Charania of The Athletic reported that the Heat and the Denver Nuggets are possible destinations for the 6-foot-4 playmaker.

“Holiday could become the target of trade talks throughout the NBA, with teams such as Denver and Miami believed to be possible destinations. Holiday has embraced the leadership position this season, but he wants to compete at the age of 29 with free agency looming for him in 2021 ($27.1 million player option for 2021-22).”

But if the Heat fail to land another star before the February trade deadline, they are still expected to compete for a seat in the Eastern Conference Finals. They have already beaten the Bucks, the Sixers and the Raptors this season, excellent indicators that they are not just pretenders in the East.

The Los Angeles Clippers have retooled themselves into a perennial contender in the Western Conference after nabbing superstars Kawhi Leonard and Paul George. But they are not done in terms of moving pieces to boost their roster. Dan Woike of the Los Angeles Times reported that the Clippers are looking into acquiring Chicago Bulls combo forward Thaddeus Young, possibly in exchange for defensive player Maurice Harkless.

“Harkless is in the final year of a contract that will pay him more than $11 million this season, a significant figure if the Clippers decide to make a deal to upgrade their roster. For a trade to work, the numbers have to essentially match, and Harkless’ cap number likely would be a crucial piece in any deal.

Though it is too soon to know whether the Clippers truly have trade intentions, they are sniffing around. NBA sources not authorized to speak publicly believe the Clippers are looking at players like Chicago power forward Thaddeus Young.”

The 31-year old Young signed a three-year, $43 million deal with the Bulls last summer. He agreed to join the Bulls as he hoped he would have a consistent quality role for the squad. However, the lefty versatile forward is only logging in 21.5 minutes per contest this season, the lowest of his career since his rookie year. Despite the drastic dip in his minutes, Young is still putting up a decent stat line of 8.6 points, 4.4 rebounds, 1.9 assists and 1.0 steals per game.

It could be traced to early December that Joe Cowley of the Chicago Sun-Times reported that Young has been unhappy in his diminished role for the Bulls.

“According to several sources, including a teammate, Young has been unhappy with his role, specifically his minutes, and if things don’t improve, the Bulls shouldn’t be surprised if Young’s camp asks for a trade now that he’s eligible to be moved after signing a three-year, $41 million deal back on July 6.”

Although it’s tough to imagine Young being given a starting role in the Clippers squad, it would be better for the defensive-minded veteran to play for a championship-aspiring team. Chicago is the fifth team that Young has played for in his 13-year career. He had previous stints with the Philadelphia 76ers, the Minnesota Timberwolves, the Brooklyn Nets and the Indiana Pacers. A great defensive stalwart who can defend both guards and forwards, Young’s playmaking on offense is also underrated.