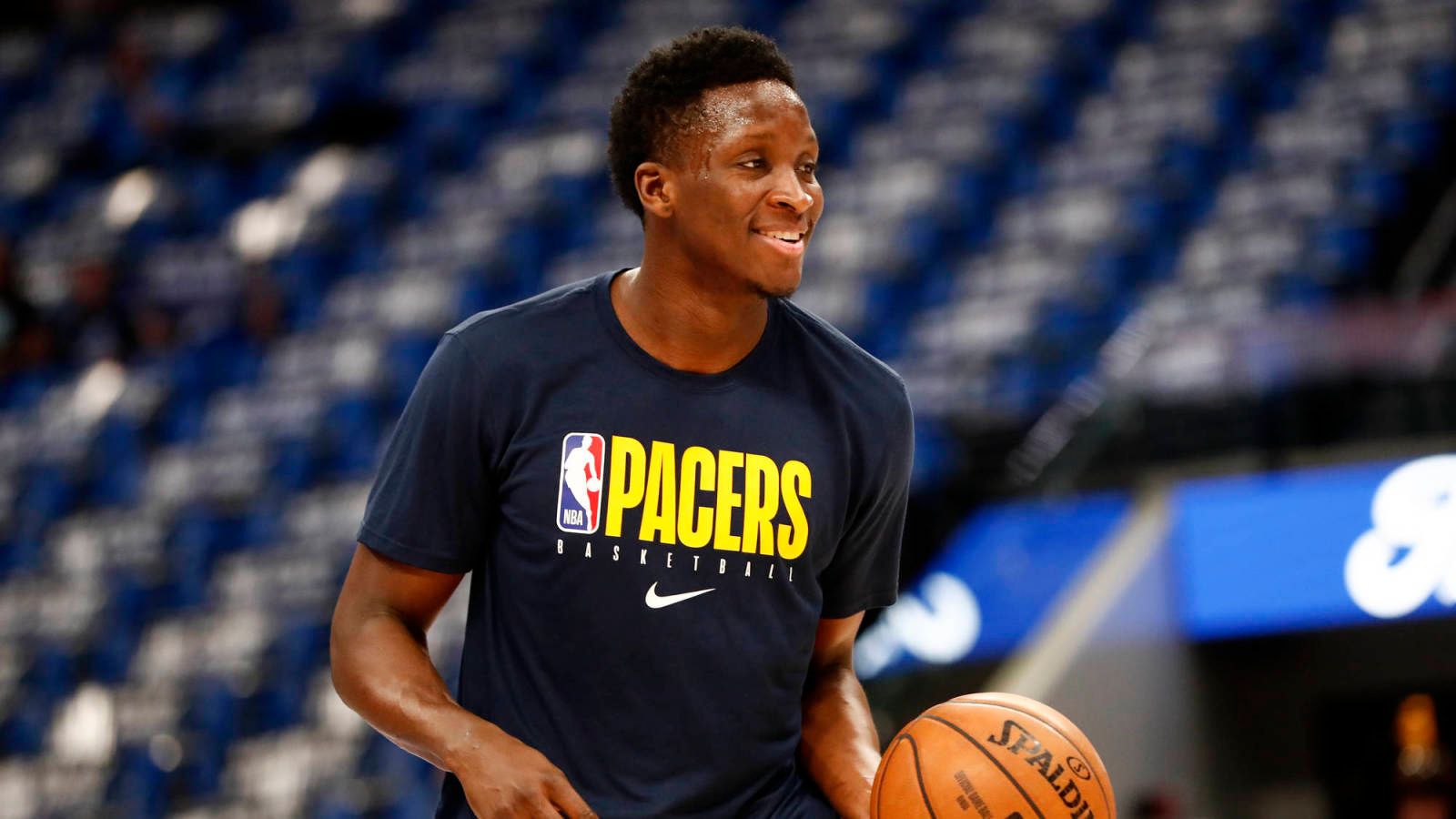 The Milwaukee Bucks are in a difficult situation as they are facing the potential of losing superstar Giannis Antetokounmpo in free agency next year. Antetokounmpo has expressed willingness to stay in Milwaukee, but most experts believe that it will all depend on how the Bucks will improve their roster next season. Milwaukee was tagged as serious title contenders in the past two seasons but failed to win at least an Eastern Conference title.

With the pressure to make Antetokounmpo happy mounting, the Bucks are reportedly reaching out to teams about a potential blockbuster deal. According to Kevin O'Connor of The Ringer, the Bucks have already talked to the Indiana Pacers about a possible trade for Oladipo. While there is no imminent deal and the Pacers are expected to ask for a lot, the situation is worth monitoring because the Bucks know that the clock is ticking for them.

However, trading for Oladipo comes with a lot of risks, considering the assets that Milwaukee need to give up in order to acquire him. Oladipo is coming off a long recovery from a quad injury, which greatly affected his confidence and athleticism last season. He only played 19 games last season, where he posted 14.5 points and 3.9 rebounds, which is a far cry from his averages of 23.1 points and 5.2 rebounds the season before he was injured.

Oladipo might also turn out to be a one-season rental for any team that would trade for him. The 28-year-old guard will be playing in the final season of his four-year, $85 million contract. According to Jake Weinbach of Hoops Habit, the Bucks will be facing a tough decision if they get a chance to acquire Oladipo, but he thinks that it might be worth the gamble if it would mean keeping Antetokounmpo happy in Milwaukee.

"That’s something that the Milwaukee Bucks would have to decide whether his impact is worth it," Weinbach said. "It’s no secret that the Bucks are expected to be “all in” on improving the roster this season in an effort to convince Giannis Antetokounmpo to stay long-term, so bringing in someone like Victor Oladipo, who  would mesh smoothly within Milwaukee’s top-tier systems, could become well worth  the risk even if it’s just for one season."

Weinbach also suggested two potential trade packages to acquire Oladipo. The first one involves giving up Eric Bledsoe and Donte DiVincenzo along with a 2020 second-round pick. However, he has doubts about this trade offer because the Pacers might decline to have a hand on Bledsoe's contract. The 30-year-old guard still has two seasons left in his four-year, $70 million contract with the box.

With Bledsoe out of the picture, Weinbach thinks that the Bucks could offer DiVincenzo and DJ Wilson along with Ersan Ilyasova and a 2022 second-round pick. This package would give Indiana two young assets in DiVincenzo and Wilson along with a battle-tested veteran. However, he believes that this might not be enticing enough to convince the Pacers to pull the trigger on the deal because they have the option to increase Oladipo's value.

"It would make more sense for the Pacers to hold onto Oladipo this offseason and rather trade him near the deadline in hopes of raising his value, which would also raise his price tag," Weinbach added. "Clearly, there will still be plenty of phone calls  from multiple teams regarding Oladipo’s availability in this upcoming offseason, but  it may take an overwhelming offer to land Oladipo right now before the 2020-21 season begins."

On the other hand, Nekias Duncan of Basketball News offered a different perspective. Duncan does not expect the Pacers to be high on acquiring Bledsoe, but they might be keen on adding veteran guard George Hill in a package involving DiVincenzo and Ilyasova, who will serve as a cap filler in the deal. Duncan thinks that Hill could mesh well with Pacers guard Malcolm Brogdon.

"If the Pacers aren’t keen on potentially three years of Bledsoe, they could ask for Hill back. An elite spot-up shooter, solid defender across both guard spots and good decision-maker, Hill could flourish in an off-ball role alongside Brogdon," Duncan said. "DiVincenzo has equity as a driver, and has already proven to be one of the better screen-avoiders in the league on the other end. The jumper is his swing skill, but he has the skill-set and size to float between three positions in a pinch."

The Oladipo situation in Indiana remains fluid at this point, as the two teams are still expected to try to negotiate for a contract extension. The two-time All-Star has already denied that he is looking for a trade, saying that he is committed to staying in in Indiana at least for next season.

James Herbert of the CBS Sports also touched on the tough situation the Bucks are facing this offseason. He said that Milwaukee is now in a "whatever-it-takes" situation because their ultimate goal is to convince Antetokounmpo that the Bucks are still the best team for him. Herbert said that the Bucks should try to trade Bledsoe in the hopes of upgrading the backcourt for next season.

"Eric Bledsoe made All-Defense this past season, but his $16.9 million contract would have to be involved in almost any meaningful trade," Herbert said. "Milwaukee could use a switchable big and more shooters who can stay on the floor in the playoffs, and  it clearly needs more playmaking. An upgrade at the point guard spot would make sense."

If he will have it his way, he would love the Bucks to reach out to the Oklahoma City Thunder to talk about a possible trade for veteran point guard Chris Paul. He believes that trading for Paul makes a lot of sense for Milwaukee, as it would give Antetokounmpo another star to play with. However, trading for Paul would be easier said than done, considering the fact that he would attract a lot of attention on the trade market this offseason.

"Chris Paul had such a stellar season with the Oklahoma City Thunder that he could  find himself on a contender again," Herbert said of Paul, who averaged 17.6 points on top of 6.7 assists and 5.0 rebounds per game last season. "Milwaukee makes sense in theory, but so do a bunch of other teams that are either already among the elite or think they would join the elite with Paul in the fold."

John Chick of The Score also gave his own take on Milwaukee's search for another star. Chick thinks that the situation of Bradley Beal in Washington is worth monitoring. While the Wizards are keen on having another run with Beal and John Wall next season, there's a strong chance that the Washington will eventually deal him. He is convinced that Beal would be a great fit for the Bucks, but they have to be creative to acquire him.

"Imagine Beal playing shooting guard behind Giannis Antetokounmpo for the Milwaukee Bucks," Chick said. "With the heat on the Bucks to craft a winner around the two-time MVP, it's the kind of move that puts them over the top. Beyond a straight-up deal for Khris Middleton, however, Milwaukee would likely need to get creative and involve a third team."

If the Wizards eventually decide to trade Beal, they are expected to ask for a huge sum in return. The 27-year-old guard is coming off the best year of his career, as he finished second behind James Harden in the scoring race with 30.5 points per game to go along with 6.1 assists and 4.2 rebounds per game. Beal is also in contract in the next two years after signing a two-year, $71.76 million extension last year.

The Bucks are expected to be linked to more possible trade targets in the coming days heading into the 2020 NBA Draft. Signing a marquee free agent is unlikely at this point because the Bucks do not have enough cap space, but there's always an option for a sign-and-trade deal. The Bucks were recently linked to restricted free agent Bogdan Bogdanovic, who is reportedly one of their options to improve the supporting cast of Giannis and Middleton.

Bogdanovic, who averaged 15.1 points to go along with 3.4 rebounds and 3.4 assists last season, would be a great addition to Milwaukee. However, as Jordan Treske of FanSided discussed, Milwaukee have to move quickly because time is not on their side, especially now that there is a chance the season will begin on December 22, which means there's a shorter window for trades and free-agency signings.

"With some of their biggest trade assets being incredibly time-sensitive, time will be of the essence for them to arrange potential trade packages as soon as when trades will be allowed ahead of the draft," Treske said. "As a result, that would certainly limit the possibilities of the Bucks trying to facilitate a sign-and-trade deal as would have to be the case for Bogdanovic."

One of the assets that they can use in a sign-and-trade deal this offseason is the 24th overall pick. The pick is unlikely to stay with the Bucks, knowing that there is a low possibility to get a player who could immediately lessen the burden on the shoulders of Antetokounmpo and Middleton.