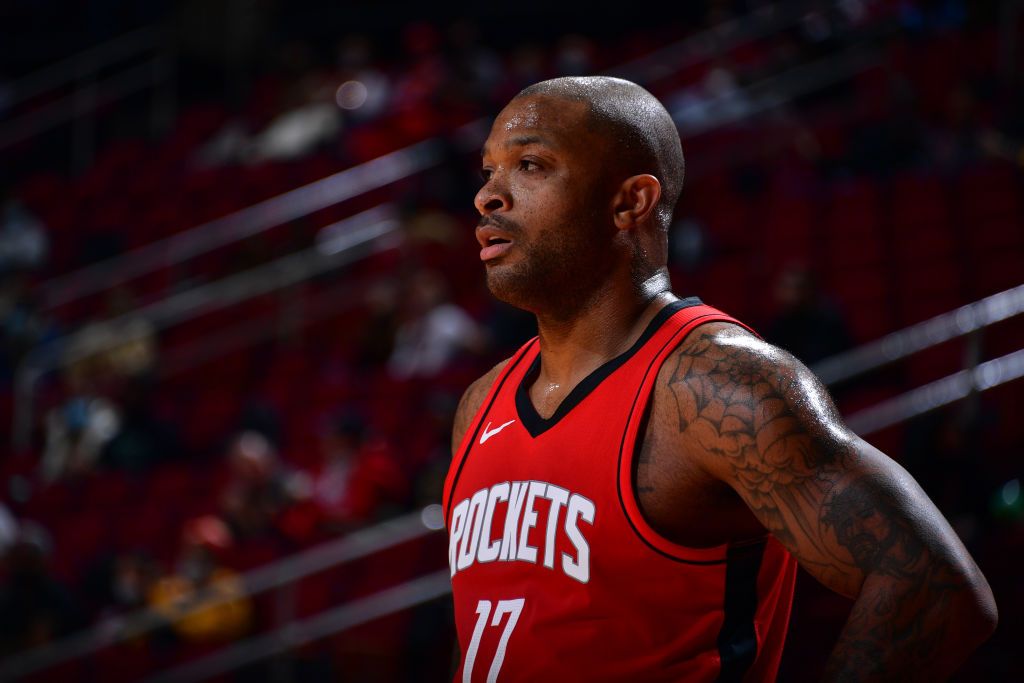 The P.J. Tucker era in Houston is officially over. The veteran forward, who has made a name for his bruising, defensive-minded game, is now set to move to the Eastern Conference and join reigning back-to-back Most Valuable Player Giannis Antetokounmpo and the Milwaukee Bucks.

Tucker, who will also be turning 36 years of age in a couple of months, has spent the last three years with the Houston Rockets. He has established himself as a Swiss Knife on the defensive end of the floor, even assuming a big man role for the “micro-ball” line-up that the Rockets fielded in last year.

But with the Rockets trading away James Harden and Russell Westbrook, their two stars from last season, along with the departure of head coach Mike D’Antoni and general manager Daryl Morey, Tucker’s inevitable departure from Houston was already written on the wall. Add to that the fact that he is also struggling with his percentages this season as he is just producing a lowly 31% clip from the three-point line.

ESPN Senior NBA Insider Adrian Wojnarowski reported about this interesting development, and detailed out the value of this trade deal for both the Bucks and the Rockets.

The Bucks are sending guard D.J. Augustin and forward D.J. Wilson to the Rockets for Tucker and forward Rodions Kurucs, sources said. The key to completing the deal includes the redirecting of draft picks the two teams had previously traded in the offseason. Houston is pushing back  the 2022 first-round pick Milwaukee owes it to the unprotected 2023  draft, sources said. The Rockets get the right to swap their 2021 second- round pick for the Bucks' 2021 first-round pick -- unless the Bucks' pick somehow falls 1-9, sources said.

Essentially, the Bucks will be moving back a few slots from the end of the first round -- where they will presumably be picking this season -- to the top of the second round, where the Rockets -- who own the second-worst record in the league -- appear destined to land.

The Bucks will be Tucker’s fourth team in the NBA. He started his career with the Toronto Raptors during the 2006-07 season, but then he played overseas for the next five years. He then came back to the NBA in 2012, when he suited up for the Phoenix Suns. Tucker spent four seasons there before coming back to the Raptors.

After that, he then moved to Houston, where he became one of the most versatile defenders in the league. Tucker is currently putting up 4.4 points, 4.6 rebounds, 1.4 assists and 0.9 steals per game this season. He is only norming a measly 31% clip from the three-point line, quite a dip from his percentages in the previous years.

Still, Tucker will be a very excellent addition to the championship-chasing Bucks squad. The Bucks had the best regular season record going into the playoffs in the Orlando bubble last year, but was soundly defeated by Jimmy Butler and the Miami Heat. With Giannis re-signing with them, along with the fact that they brought in an all-around point guard in Jrue Holiday.

In a roundtable discussion by Danny Leroux, Seth Partnow, and Sam Vecenie for The Athletic, the three writers talked about how important this deal is for the Bucks’ hopes of going deeper in the playoffs. Partnow, in particular, pointed out to the fact that Tucker has the ability to switch on defense, although he warns that the veteran forward has declined on that end of the floor too, especially during this season.

In prospect, Milwaukee adds the sort of versatile, switchable front-court defender they have been lacking in the last two playoff runs. In his limited playing time so far this season, Tucker has not been especially effective defensively, though the general discombobulation and tumult of Houston’s season may well have something to do with that. However, in terms of defensive impact metrics, Tucker had already slipped somewhat  from the extremely high level he attained in his first few Rockets’ seasons.

Offensively, Tucker’s game is basically corner threes only — 51 percent of his field-goal attempts in his three-plus seasons in Houston. He made a respectable 38.7 percent (roughly league average) of those attempts but managed only 33.4 percent above the break.

Aside from Holiday, the Bucks also brought in new other faces last offseason. They acquired Bryn Forbes and Bobby Portis, two players who can space out the floor well with their excellent long-range marksmanship. D.J. Augustin was also a recent acquisition, but the veteran point guard struggled this season, especially on the defensive end of the floor.

Augustin surely helped with his long-range marksmanship, but he was a liability on defense. There were a lot of times that the sweet-shooting guard would get lost in the Bucks’ defensive schemes, especially when he is forced to switch out on a bigger frontcourt player.

So even if the Bucks are also sending a young asset in DJ Wilson, getting rid of Augustin was already written on the wall. Still, Jonathan Tjarks of The Ringer believes that getting Tucker is just the “first step” in the Bucks’ venture of filling out the holes in their roster.

Tjarks emphasized on the fact that Tucker hasn’t been the same effective player as he was during his playoff runs with the Rockets. For this reason, Tjarks says that the Bucks front office should not stop making moves to further bolster their roster this season.

Tucker has been an elite role player for most of his time in Houston. The best version of him was an elite interior defender with the strength and toughness to play much bigger than his size (6-foot-5 and 245 pounds) and the quickness to defend on the perimeter. He always has been fairly limited offensively, but could make open 3s (career 35.9 percent on 2.9    attempts per game) and space the floor.

But we haven’t seen that version of Tucker this season. Harden forced his way out of town, the Rockets imploded, and the 35-year-old Tucker appeared to age overnight. His averages in points (4.4), rebounds (4.6), field goal percentage (36.6), and 3-point percentage (31.4) fell off a cliff. He looked a step slow and unable to play the type of intense defense that he’s known for. The question is whether it was a physical decline, or  Tucker taking his foot off the gas until he was traded. He wasn’t playing with as much effort, but he’s also an older player with a demanding role who has put a lot of miles on his body.

The Bucks are now riding a five-game winning streak, and have won 10 of their last 11 assignments. They will now head back home where they for a five-game home stand in which they will host the San Antonio Spurs, the Indiana Pacers, the New York Knicks, and a two-game mini-series against Jayson Tatum and the Boston Celtics.

Torrey Craig’s stint in Milwaukee proved to be a short tenure. After appearing in 18 games while logging in 11.2 minutes per contest, Craig is now on his way to the Phoenix Suns to join Chris Paul, Devin Booker and Deandre Ayton.

In the same column that Jonathan Tjarks wrote for The Ringer, he says that the Craig deal just means that the Bucks are not wasting time in correcting the offseason moves that did not fit them as the season went on.

The most important part of Milwaukee’s trade for P.J. Tucker is the mentality behind it. The Bucks admitted a mistake by dealing a couple of  offseason signings who haven’t worked (D.J. Augustin and Torrey Craig, the latter of whom was sent to the Suns in a separate trade) and created assets out of thin air by tweaking future draft pick obligations they already owed to the Rockets. It’s the kind of aggressive move they haven’t made in the past. Milwaukee now has two open roster spots it can fill without going into the luxury tax. That’s good because the Bucks can’t count on Tucker being enough to win an NBA title. They have to keep pushing.

Craig, who is on his fourth year in the league, played for the Denver Nuggets in the past three seasons. He played measly minutes in his rookie year, but then grew into a rotation player under head coach Michael Malone.

Craig has excellent length for his 6-foot-7 frame, and has the foot speed to keep up with smaller and quicker perimeter players. He still has to improve his shot from beyond the arc, but it is a weakness that should prove to be fixable. He has career averages of 5.0 points, 3.3 rebounds, 0.8 assists, 0.4 steals and 0.5 blocks per game.