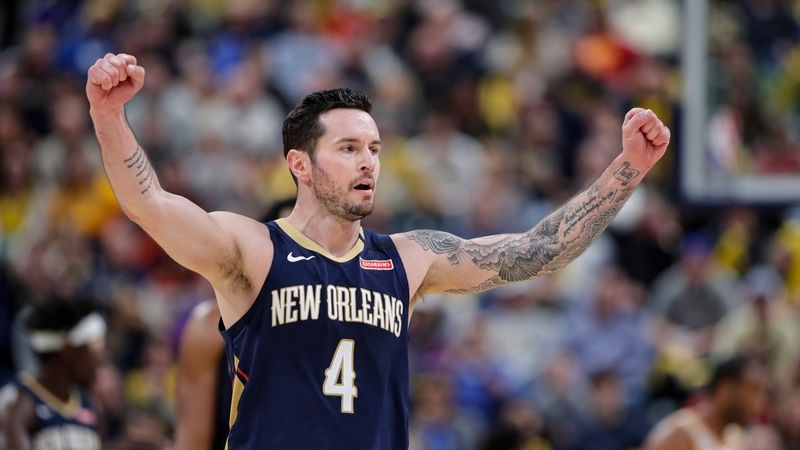 JJ Redick, one of the best long range gunners that the league has seen throughout its existence, could be donning new threads for an Eastern Conference team this season. Redick has been with the New Orleans Pelicans since last season, although his stint there has not been met with much collective success.

The Pelicans, who are spearheaded by young stars Brandon Ingram and Zion Williamson, failed to make the playoffs last season. Redick normed 15.3 points, 2.5 rebounds and 2.0 assists per game last year, including a stellar 45%  clip from the three-point line. However, his production and playing time have decreased this season.

Redick is only logging in 19.9 minutes per contest, the lowest that he had seen since his third year in the league. But it is also true that the veteran’s efficiency has gone down in a drastic way. The 36-year old is only putting up a lowly 29%  clip from beyond the arc, clipping his scoring production which is now down to 7.9 markers per contest.

It is certainly expected for an aging veteran to see his production go down like this, but there is still an anticipation that Redick’s long range marksmanship will be valuable in the right and fitting system. The Athletic recently reported that Redick is aiming to be traded to a team in the East Coast, primarily because he wants to be always near to his family, who are currently living in Brooklyn.

“As Feb. 2 looms as the NBA’s deadline for teams to aggregate acquired      players in a trade later, the New Orleans Pelicans have focused on the         Philadelphia 76ers, Brooklyn Nets and Boston Celtics as potential trade   destinations for JJ Redick, sources tell The Athletic's Shams Charania.

Redick, whose family resides in Brooklyn, is believed to have a strong          preference to return to the northeast area. No deal is imminent yet,               sources said. In the 76ers, Nets and Celtics, the Pelicans are targeting a        championship contender for a trade home. All three teams have expressed interest, sources said. Redick is on a $13.1 million contract that expires at the end of the season.”

Of course, this development should not be viewed as a knock on the Pelicans organization. Obviously, there are high expectations for this team but they are still a very young squad. Ingram, their undisputed leader, is just coming off his first All-Star appearance. Zion is just on his second year in the league, and the all-around Lonzo Ball still has tons of room and time to make improvements on his already well-rounded game.

So this is not because the Pelicans don’t have the potential to win. At this late stage of his career, Redick might want to have an opportunity to play for an elite contender whose approach is to seriously win right now. Moreover, he chose Eastern Conference teams as his preferred destinations to be with his family almost all the time.

Jared Weiss, the Celtics beat writer for The Athletic, said that the rest of the league are not that desperate to make a trade for Redick. In fact, Weiss reported that the veteran sharpshooter is more seen as a buyout candidate than a trade piece.

“It seems like this is going to be a game of chicken to see who coughs          up a first … first. Most of the league sees Redick as a buyout candidate,      and it’s apparent New Orleans wants to make a move now so it can still flip any incoming salary before the deadline, so Philly and Brooklyn  have to throw out their best offers now since Boston can just use its TPE, which actually gives David Griffin a bonus asset. It’s ironic that the Celtics can actually offer more asset value in salary matching by just not needing to send out any salary, because it would create a $13 million TPE for NOLA to then use to trade for whomever they want this year or during the offseason.

So I guess the first question is whether there can be a better non-pick              asset in a deal with these teams. There is one obvious contender in               potential upcoming free agent Spencer Dinwiddie.”

As for these three teams rumoured to be interested in Redick’s services, they will be getting an elite three-point shooter who does not need much space to get off his shot. Redick is one of the best in wriggling off multiple screens and putting up off-balanced jumpers over the outstretched arms of a defender.

The weakness in Redick’s game is that he could be a liability on the defensive end of the floor. Although it is true that he exerts tremendous effort on that end and his experience could boost his instincts, Redick’s lateral movement and foot speed are already slowed down by his age.

With that said, the Nets might not be too keen in acquiring him. With the recent acquisition of superstar James Harden, the Nets already have all the scoring that they need. Their priority right now is how to bolster their defense as they have been giving up tons of points to their opponents, resulting to disappointing losses.

That fact makes the Celtics and the Sixers as the more probable trade partners for Redick’s services. Both of these teams have enough depth on defense that they can hide Redick’s weaknesses on that end of the floor. Derek Bodner of The Athletic also chimed in his thoughts on this development as he says that the Sixers’ need for more shot creators could eventually lead them to pursue a trade for Redick.

“But the Sixers have a few significant holes right now. Rivers can’t go          a press conference without lamenting the loss of Mike Scott to injury;       they could really use a backup stretch five to pair in lineups with the  non-shooting Ben Simmons; and most of their best dribble-drive shot         creators are young, unproven guards (rookie Tyrese Maxey and Shake     Milton) who would be tough to fully rely on in the playoffs.

I think there are reasons the Sixers would be interested, but I also      understand if they would have reservations. From the Sixers’   perspective, I think they’d probably like to see how Redick reacts over the next month and a half before the trade deadline before committing, especially since slotting him in alongside Embiid isn’t exactly an adjustment that will take long to get back up to speed. So here’s my question for Jared and Alex: What do you think are the odds that either the Celtics or the Nets act quickly on a Redick acquisition, and this is done well before the deadline?”

The Sixers have been relying heavily on All-Star big man Joel Embiid this season. So far, Embiid has been delivering great results as he is also putting up an MVP-caliber performance this season. But with Ben Simmons still not able to come up with a consistent jumper, the Sixers might have to look outside to get their needed reinforcements on offense.

The Celtics could also be an intriguing team to watch in this race for Redick’s services. With Kemba Walker struggling to get into a rhythm this season, the Celtics might need someone like Redick to create and make shots for them. Getting another elite shooter should help them space out the floor, especially with the opposing team’s defenders gravitating towards stars Jayson Tatum and Jaylen Brown.

Aside from these three teams, Brandon ‘Scoop B’ Robinson also reported that there are other parties involved in the dance. Robinson mentioned the likes of the Golden State Warriors, the Miami Heat, the Phoenix Suns, the Orlando Magic, the Sacramento Kings, the New York Knicks and the Portland Trail Blazers as possible destinations for the veteran shooting guard.

It remains to be seen as to which team will Redick land in a trade this season, but it is becoming a sure thing that he will be leaving the Pelicans nest to move to another contending team and compete for a coveted championship.