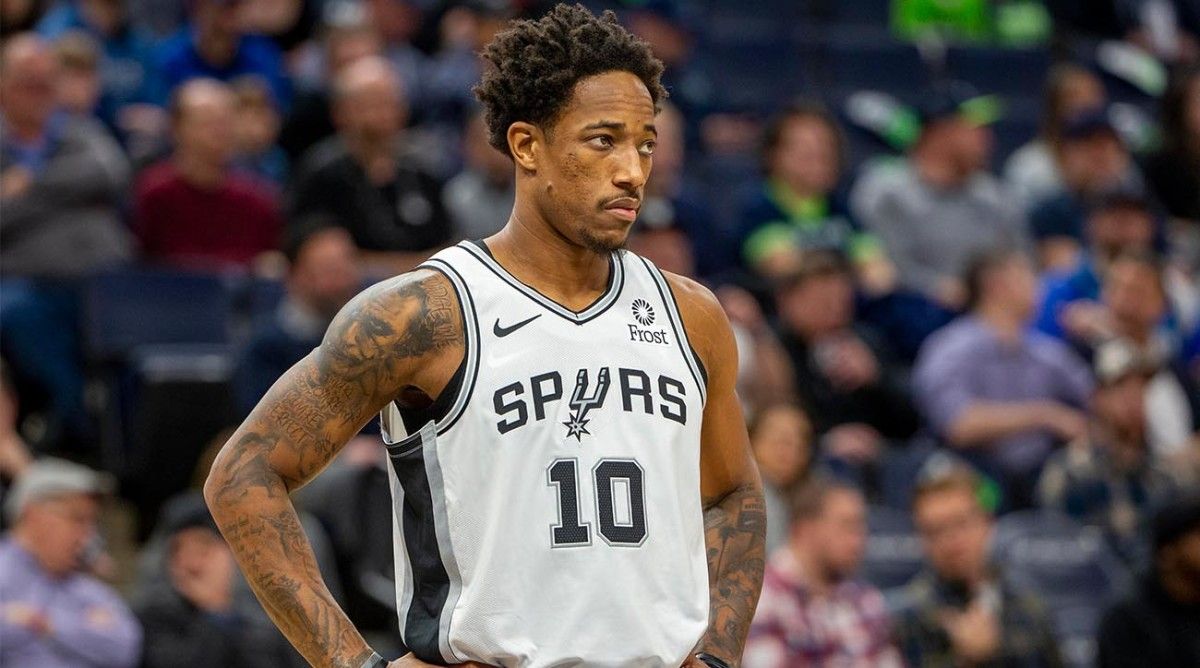 Magic rumoured to be interested in Spurs star scorer

The Orlando Magic front office may be getting tired of waiting for the right time for them to become an elite championship contender. The Ringer’s Kevin O’Conner recently reported that the Magic are keeping their eyes open on a possibility to trade for San Antonio Spurs scoring swingman DeMar DeRozan. What’s even more interesting is that O’Conner also said that team executives around the league actually expects the Spurs to move DeRozan at some point in this season.

“DeRozan can become a free agent in 2020 by declining his $27.7 million player option… The Spurs could always deal him sooner rather than let him walk for nothing. Multiple league sources say the Magic are scouring the trade market for  scoring help and have already expressed interest in trading for DeRozan.

It would surprise none of the front-office executives I’ve spoken with if the Spurs did  move DeRozan.”

DeRozan was acquired by the Spurs as a centrepiece of that Kawhi Leonard blockbuster trade with the Toronto Raptors in the summer of 2018. Should DeRozan opt out of his player option next summer, he would have the chance to become a top option in next year’s free agency class. However, the possibility of DeRozan declining his option is still up there in the clouds of uncertainty. He is already 30 years old so he is arguably entering the twilight stage of his career. But another important point to consider is that the 2020 free agency class is a very shallow one, so teams who are really desperate to upgrade their roster could take a chance on signing DeRozan to a lucrative multi-year contract.

Moreover, DeRozan is still one of the best scorers we have in the league. His playmaking has also improved in his first year under the brilliant Spurs head coach Gregg Popovich. Through 14 games this season, he is still logging in heavy minutes while posting all-around averages of 21.0 points, 5.1 rebounds and 4.8 assists per contest.

Of course, it’s still unsure if the Spurs will be active in shopping DeRozan. Although they are struggling at this early part of the season with a 5-9 record, the Spurs aren’t really known for giving up a season. After all, they have made the playoffs since 1997. But should the Spurs try to gauge how other teams will value a DeRozan trade, the Magic could successfully entice them. They have a bevy of good young assets to trade, not to mention that those players also come with light contracts. Third-year combo forward Jonathan Isaac and sophomore center Mohamed Bamba are intriguing pieces.

But the Magic player that should have the highest trade value is the high-flying forward Aaron Gordon. Gordon’s production has dipped a bit this season, but he is still valued high for the intangibles and the potential that he brings to the table. Shams Charania of The Athletic recently reported that the 6-foot-9 athletic freak has garnered trade attention from other teams.

“Multiple teams are monitoring Magic forward Aaron Gordon with interest should an opportunity present itself, but the Magic have shown no interest in moving him, sources said. Orlando is 4-7 and working to turn the corner early this season. Gordon signed a four-year, $76 million deal to return to the Magic in 2018.”

Indeed, the Magic has won four of their last five games, including a recent three-game winning streak. Gordon has been a key cog in those wins, highlighted by an all-around performance of 18 points, 13 rebounds and 7 assists during a much-needed win against the powerhouse Philadelphia 76ers. Moreover, Gordon packs a wider skill set than most people think of him. Aside from the elite athleticism he owns, he also racks up the assists and can get to the free throw line if he puts his mind into it. His weakness still lies on his three-point shooting, which has been a bit shaky this early season (28%).

Still, Gordon is the most valuable trade asset that Orlando has. If they have the chance to nab DeRozan, it would make little sense to include All-Star center Nikola Vucevic in the deal. Vucevic has been their cornerstone in the past few years. A DeRozan-Vucevic pairing should be good enough to contend in the East, especially with an excellent head coach like Steve Clifford at the helm.

This hasn’t been the year that the New York Knicks imagined it would be when they traded star Kristaps Porzingis last season to clear out some cap space. In trading away a star like Porzingis, we saw how confident they were that they will successfully acquire max free agents in the summer. But that never happened and the Knicks are now off to a lowly 4-10 record to start the season.

Despite top-tier free agents spurning the Knicks last offseason, there was actually one superstar who had New York as one of his preferred trade destinations. Ex-New Orleans Pelicans star and now Los Angeles Laker Anthony Davis listed the Knicks as a possible destination for him last summer. The Pelicans were already gauging the trade market at that time as AD has made it clear that he won’t play another game for the squad. Well, we all know what happened next as the Lakers eventually got what they always wanted. Davis partnered with LeBron James and they are now shooting the lights out at Hollywood.

So why didn’t the Knicks aggressively pursue a Top 5 player like Davis? Brian Windhorst of the ESPN has the answer to that question.

"Unlike other major stars recently, Davis had expressed interest in playing for the Knicks. But Mills and Perry told people they were turned off by the Pelicans' high asking price of multiple first-round picks plus multiple young players, even though  the Knicks had that type of package thanks to their Porzingis trade. They said it would have undercut their long-range plan of building through the draft and  developing picks into stars."

And then there is also the dreadful possibility that Davis will leave them when he becomes an unrestricted free agent in 2020. It will be a double knockout situation for the Knicks, especially considering that they have to give up a massive haul of assets to trade for Davis. The Knicks don’t have the player personnel to support Davis’ championship aspirations, so the chances of him signing with another team in 2020 is really high.

Love and Thompson could welcome trade out of Cleveland

Tristan Thompson has seen his production spike up this season, while five-time All-Star Kevin Love is slowly re-acclimatizing himself to the main man role he had during his tenure with the Minnesota Timberwolves. Yet, the Cleveland Cavaliers are still sporting a losing record of 4 wins against 9 losses, and there are a lot of reasons to believe that they won’t get into the playoff race anytime soon.

Joe Vardon of The Athletic recently reported that Love and Thompson would love to compete for another championship trophy and they wouldn’t be disappointed if they got traded to a contending team this season.

“Sources close to both players said that, yes, they would like to play for a team with a chance to win another title as they reach the later stages of their careers.

So they would, essentially, welcome trades out of Cleveland if something like that came up. But don’t read too much into it. It’s not so simple, and at any rate, they have neither asked out nor are they playing as if they want out.”

The 6-foot-9 Thompson is racking up a double-double stat line for the Cavs, amassing a career-high in points with 14.5 per game while grabbing 10.1 rebounds and totalling 1.5 blocks, another career-high for him. On the other hand, Love is also norming double-double averages of 18.2 points and 12.1 boards per contest, and is shooting a 35% clip from beyond the arc.

Between these two frontcourt players, Thompson is arguably the more tradable asset. Yes, he will make a massive $18 million this year but his contract will expire after this season. As for Love, his lucrative four-year, $120 million contract will end in 2023. He will eclipse the $30 million salary in 2020 and 2021, while he is set to make $28 million in 2022. The 31-year old Love is already entering the twilight of his career, so teams could be hesitant in pulling the trigger on trading for his services.