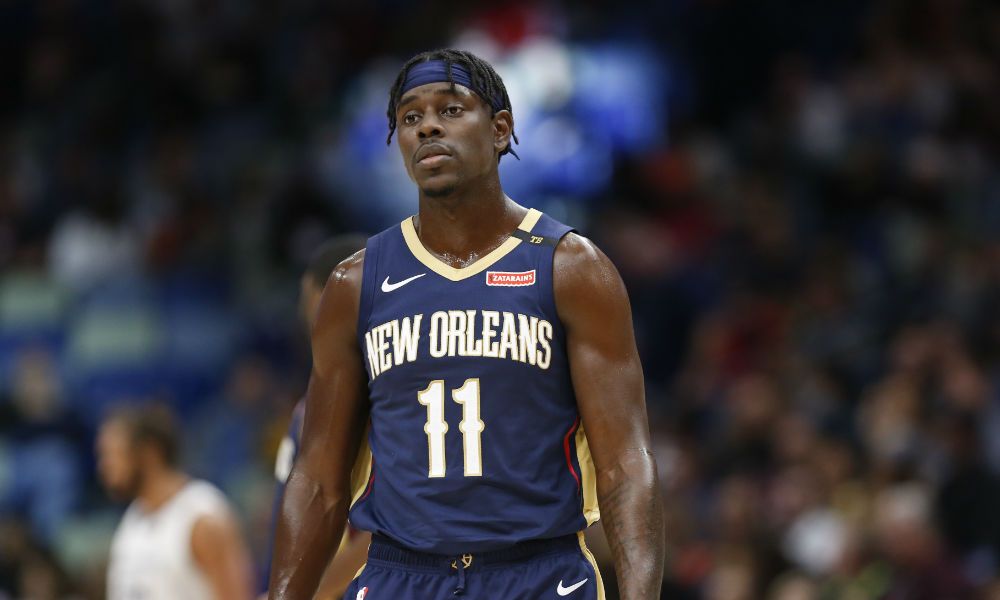 As the losses keep on piling up for the New Orleans Pelicans, we could see a couple of big changes in their roster in these upcoming weeks leading to the February trade deadline. Two names have been heating up in trade rumors for the Pelicans – all-around point guard Jrue Holiday and veteran big man Derrick Favors.

Marc Stein of the New York Times tweeted out that the Pelicans front office deem young forwards Zion Williamson and Brandon Ingram as untouchables in trade negotiations. However, Stein added that Holiday could become the team’s most valuable trade asset.

“Yet what that also means is Jrue Holiday is indeed available via trade, league  sources say. It would surely cost a significant amount to pry him away from the Pels, but this is a notable change in status given how unavailable Holiday was to interested teams last season.”

Holiday, 29, is norming stellar numbers of 19.4 points, 5.0 rebounds, 6.6 assists and 1.7 steals per game this season. He is currently logging in the most minutes per contest for the Pels, an excellent indicator that the 6-foot-3 combo guard is still at the peak of his career. A great shot creator who has blossomed into a tremendous playmaker, Holiday is also one of the best defensive point guards we have in the league right now.

The only setback that comes with his package is the fact that his multi-year contract will end in 2022. He has a $26 million player option in 2021, and it’s highly-expected that he will be opting in that year. That could push some teams to hesitate in trading for him as most organizations are now tilting their sights on the stacked 2021 free agency class.

Another Pelican player who has been gaining a significant amount of trade interest is the 6-foot-11 Favors. Heavy.com’s Sean Deveney reported that teams are keeping tabs on how the New Orleans front office will handle Favors’ situation with their struggling squad this season.

“According to league sources, one of the more disappointing players on one of the  league’s more disappointing teams—Derrick Favors of the Pelicans—is being“monitored” by several teams. There’s still no indication that New Orleans, with  Favors having missed time because of back spasms and the death of his mother, will raise a metaphorical white flag, sell off veteran pieces and look ahead to next season.”

Favors, 28, is having a down year this season. The Pelicans acquired him through a trade last summer, expecting him to become their main man at the middle. But Favors has been hounded by injuries and personal problems early this year, obviously affecting his on-court production.

Yet, Favors comes in a very light package. The two-year, $37 million contract he signed with the Utah Jazz last year will be expiring after this season. That should be a big positive thing for contending teams who need to add a quality contributor but don’t want to commit into a long-term financial tie-up with that player. Despite his scoring taking a dip this year, Favors will still be a solid contributor for any contending team.

Also among the Pelicans players speculated to be part of trade talks is veteran gunner J.J. Redick. Redick signed with the Pelicans last summer, providing the much-needed experience and leadership for a very young team. However, Stein also reports that while many contending teams would want Redick on their squad, the Pelicans front office are hesitating on making him available on negotiations.

“While mired in a 12-game losing streak, New Orleans indeed remains reluctant to  trade JJ Redick, according to league sources, on top of the team's two presumed untouchables: Zion Williamson and Brandon Ingram.”

The 35-year old Redick is still norming stellar averages of 15.9 points, 3.0 rebounds and 2.1 assists, including a spectacular 46% clip from beyond the arc. With the Pelicans struggling to find their groove, Redick might be better off moving to an elite contending team to chase a coveted championship.

What’s next for Love and Cavaliers?

It’s no secret that Kevin Love has been on the trading block for a while now. Even before the regular season began, it was already highly-expected that the former All-Star big man will be moving to a more formidable playoff contender. In an exclusive interview with Jason Lloyd of The Athletic, Love says that he sees the Cavaliers better off with getting more young talents to fully optimize their rebuilding process.

“So could I see it? Yes and no. It’s tough for me to answer. If we got a year or two down the line — I don’t know what their plans are for me even in the short term. But if it got there and we weren’t getting any better, it might make sense for them to completely go young. Maybe it’s that way now. See? That’s the end of your article. With a question mark at the end.”

As was expected of them, the Cavaliers are struggling to rack up the wins, sporting a lowly 7-21 record this year. They have a good young core in Collin Sexton, Cedi Osman, Darius Garland and Kevin Porter Jr. However, those four names still pale in comparison if you look at the other team’s stronger and more talented young guns. In a separate article for The Athletic, Lloyd emphasizes that the Cavaliers front office have opened the full roster for trade talks except for the rookie point guard Garland.

“The Cavs have made it known they are open for business. One source said the Cavs have made ‘basically everyone but Darius’ Garland available in trade. That includes all of their expiring contracts, which isn’t a surprise. They are looking for future draft capital, namely first-round picks. But none of their players on expiring deals are likely to fetch a first-round pick without taking back bad money. Not even Tristan Thompson, who is having a terrific season. The fact they’re all going to be free agents next summer is flattening the value.”

On top of the cloud of uncertainty that hovers around their roster, some of the Cleveland players haven’t quite showed their full support on first-year head coach John Beilein. Beilein comes from a long successful tenure in the college ranks, making him a great player development coach. The Beilein hiring was also considered as the Cavaliers’ official signal of their full rebuild and arguably the end of their vets’ tenure in the Cleveland.

As for Love, ESPN’s Adrian Wojnarowski reported that the Cavaliers could receive a protected first-round pick along with salary relief in exchange for the 2016 champion big man’s services. Among the rumoured possible trade destinations for Love are the Portland Trail Blazers and the Phoenix Suns.

Should the Pistons move Blake Griffin?

When the Detroit Pistons traded for the athletic star big man Blake Griffin in 2018, the franchise thought that they have landed a superstar, something that they have lacked for a long time. But Griffin has been hounded by numerous injuries since, and has not been the same impactful player that he was during his Clippers days. He has not meshed well with star frontcourt partner Andre Drummond as the Pistons again disappoint with an 11-17 record to start this season.

With Drummond entering unrestricted free agency in the summer of 2020, it still remains to be seen if the Pistons will make it a priority to re-sign him. However, Griffin’s lucrative salary could be a hindrance. He is set to earn $36 million in 2020, and $38 million in 2021. Along with Drummond’s potential max contract, that is a lot of money to pay for two stars who are not getting the best out of each other.

So, will the Pistons try to move the injury-prone Griffin before the trade deadline this February? That could be a difficult trick to pull off for the Pistons front office. James L. Edwards III of The Athletic recently reported that Griffin’s trade value has gone way below than what he was projected before this season.

“Griffin likely isn’t going anywhere if the Pistons continue to stay the course for the duration of his contract, which expires after 2021-22. If a rebuild is in the cards, though, one would imagine the Pistons try to move his money. According to one league source, Griffin’s value has dipped because of the injury to start the year, the contract and his age, but that source wouldn’t be surprised if a desperate team made a move for his services.”

Indeed, the 30-year old Griffin is producing career-lows in both his scoring and rebounding. He is just tallying 16.3 points and 4.4 rebounds this season, both of which are career-lows. His three-point shooting has also dipped from 36% last season to a measly 27% clip this year. On top of that, Griffin is just averaging a 37% overall clip from the field, a very low shooting percentage for a big man in this league.