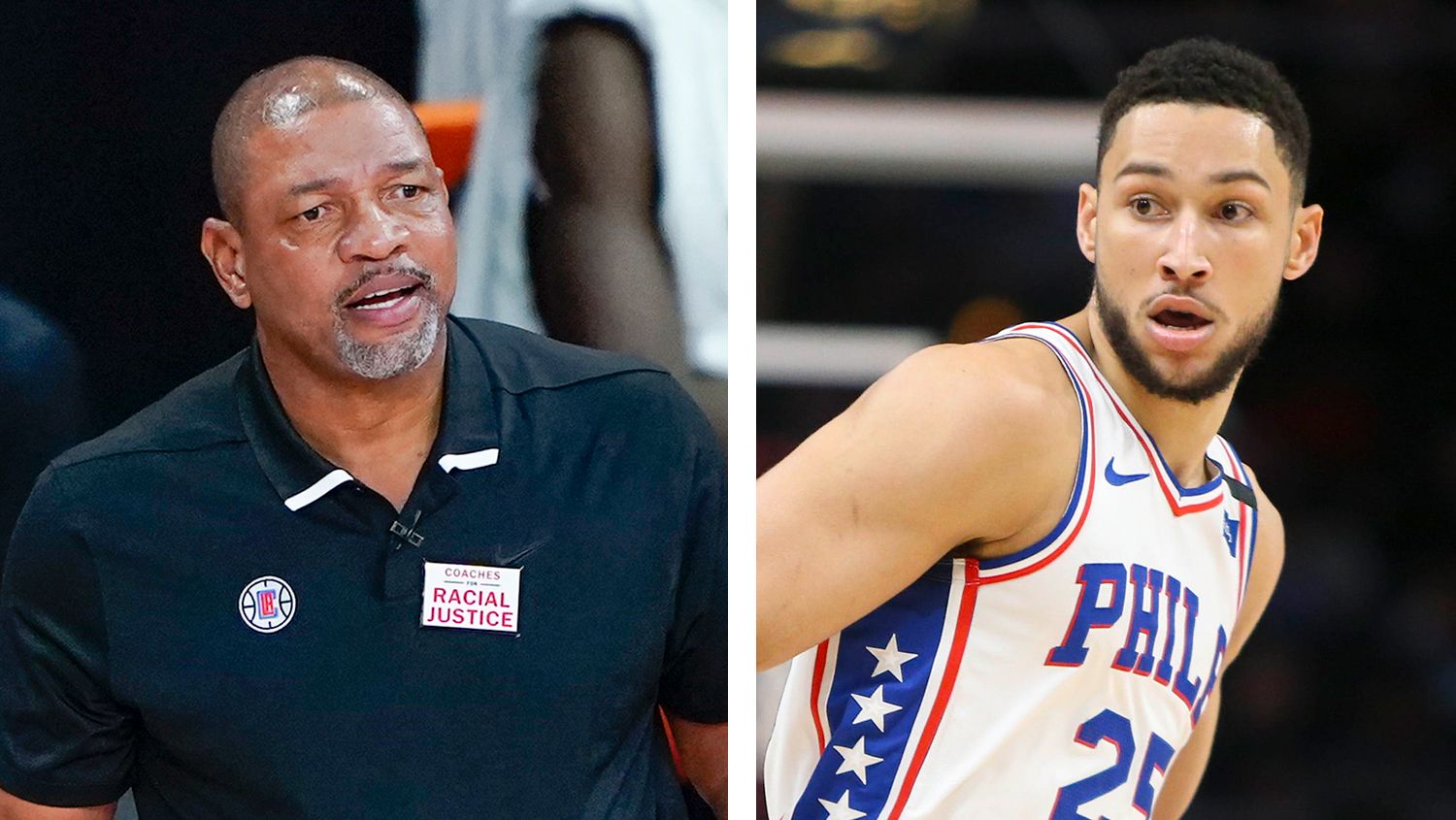 Rivers will try to convince Simmons to stay

The Ben Simmons saga in the Philadelphia 76ers camp will be a difficult riddle to solve, but team head coach Doc Rivers is very much inclined towards convincing his All-Star point forward to stay. As per an article released by the ESPN, Rivers pointed out that he and the rest of the Sixers front office and coaching staff are keen on still having Simmons on the lineup next season, and that it’s part of their job to try to change the young star’s decision of leaving the team for good.

Under Rivers’ guidance last season, the Sixers finished the regular season with an excellent record of 49 wins against 23 defeats, and were able to secure the top seed in the Eastern Conference for the 2021 NBA Playoffs. They faced the Washington Wizards in the first round of the playoffs, and easily dispatched of their opponents. However, the Sixers faced a tough challenge in Trae Young and the Atlanta Hawks in the second round of the playoffs, and it did not help that Simmons’ confidence in his abilities, especially on the offensive end of the floor, was at an all-time low.

The Sixers would go on to lose that series to the Hawks, which then prompted a lot of people to speculate on the fit between the team and Simmons’ skill set. It became apparent that the relationship between Simmons and the Sixers turned sour, leading to the former demanding for an immediate change in scenery. But as per an article put out by ESPN, it is becoming apparent that Rivers and the team want to patch things up with Simmons in an obvious effort to keep the core of their roster intact for the upcoming 2021-22 NBA season.

"Well, I hope we can change that thought. That's part of our job. The greatest thing in sports is, you know it's fair, you fail at times and then you get back on the horse and try. You would be amazed if I told you how many times through a summer when you don't win, which is 29 teams, how often you have to go through something similar to this. Because losing's hard. People internalize it, and you have to deal with it. So we're going to deal with this.

That's not what I said, actually. This is when narratives ... and this is what makes our jobs hard. I actually said when the guy asked, guys, I'm not answering that stuff right now. I don't even know how to answer that. So what I was talking about was not answering the question. It had nothing to do with Ben. Yeah, all day. All day. He just does so many things, man. The Ben Wallaces of the world. It was  great to see him go into the Hall of Fame. And the Dennis Rodmans of the world ...  help teams win titles and have Hall of Fame careers without being great scorers. I do think Ben can score way more than he has scored, but that's not what makes him great. What makes him great is all the other things he does."

The lefty point forward would go on to compile all-around numbers in the next couple of years as he was able to notch three straight appearances in the NBA All-Star Game. Simmons, who stands at a lengthy 6-foot-11 frame, is already one of the best, if not the best, versatile defenders in the league. He can effectively guard all five positions, and he is mobile and quick enough to deflect and hound in the passing lanes.

On the offensive end of the floor, Simmons has been the primary playmaker for the Sixers in the past four years. He is tall enough to see over most defenders, and he has an above-average ball-handling skills that allows him to blow past even the best defenders in the league. On top of all these, he has an explosive first step and he can finish strong around the rim. However, his inability and unwillingness to shoot from the outside have provided him a weakness that opposing teams continue to capitalize on.

The relationship between Simmons and the Sixers turned sour right after their playoff series loss at the hands of the Hawks, prompting the former to issue a trade request, or more like a trade demand away from the team. As per an article written by Senior NBA Insider Adrian Wojnarowski of the ESPN, he mentioned that Simmons was adamant in his decision, even saying that he has “no plans of to wear an NBA uniform again until he is moved to a new team.” That statement alone is already a solid argument in terms of how decided Simmons is to move on and find a new team to suit up for in the upcoming 2021-22 NBA Season.

In a looming standoff that could have lasting implications for the NBA, Philadelphia 76ers All-Star forward Ben Simmons will not report for the opening of training camp next week and intends to never play another game for the franchise, sources told ESPN on Tuesday. Simmons, 25, wants a trade out of Philadelphia and told management that he has no plans to wear an NBA uniform again until he is moved to a new team, sources said. This is setting up a  showdown for a Sixers franchise with championship hopes that will be greatly diminished without Simmons on the floor -- balancing the likely short-term losses with him sidelined against the long-term goals of getting a maximum trade return for Simmons.

Simmons explained his stance to ownership and management in a late August meeting and has had no direct contact with the organization for weeks, sources said. Simmons has four years and $147 million left on his max contract -- including $33 million for 2021-22 -- and clearly understands the potential financial implications of sitting out. The Sixers could test Simmons' willingness to stay away by fining him considerable salary. At Simmons' request, the Sixers have discussed trades throughout the league since the end of the playoffs, but they were disappointed in the offers and decided to hold on to him with hopes he would start the season and improve his trade value with his performance.

Of course, there is no doubt that Simmons is a great player, and he is just 25 years of age. He has achieved a lot in his first four years in the league, including leading the league in steals per game during the 2019-20 NBA Season. He was also named to the NBA All-Defensive Team twice, and to the All-NBA Team once. Despite his limitations in terms of his outside shooting, Simmons has already established his name as one of the best stars in the league, and it is without a doubt that he still has lots of room for improvement.

However, there is also the argument that Simmons can further improve his numbers and be effective when he is not paired with Sixers superstar big man Joel Embiid. Of course, it is not as if they do not want to play alongside each other. Time and time again, Embiid always reiterated his stance that he loves playing with Simmons and that he believes that there is still a way that this pairing could work and give the Sixers the coveted Larry O’Brien championship trophy.

Embiid, who turned 27 years of age last March, is coming off another outstanding season in which he put up an excellent stat line of 28.5 points, 10.6 rebounds, 2.8 assists, 1.0 steals, and 1.4 blocks per game. Embiid also put up a career-best set of shooting percentages, including a highly efficient 51% overall clip from the field, a tremendous 37% clip from the three-point line, and an excellent 86% clip from the free throw line. His MVP-caliber performance last season brought out speculations that the Sixers front office might be more inclined towards finding a fitting trade partner for Simmons’ services.

As per Jon Krawcynski of The Athletic, he pointed out that Sixers general manager Daryl Morey has a reputation of driving a hard bargain in trade deals and negotiations, so there is a possibility that interested teams like the Minnesota Timberwolves are going to sit back and wait for the Sixers front office to become a bit desperate in finding a suitable trade partner for Simmons’ elite All-Star services.

I won’t say that it means everything, but I do think it impacts the situation in a  significant way. The talk around the Las Vegas Summer League was that Daryl Morey was asking for the moon and the stars for Simmons, with his age, contract status and three All-Star appearances prompting Morey to say the Sixers would need a “Harden-like package” to part with him. The response from teams showing interest back then? “Good luck with that.” It is widely believed around the league that the Simmons-Embiid pairing does not work on multiple levels and opposing GMs were sitting back and waiting for things to get messy to bring the asking price into a more realistic range.

And if Simmons telling the Sixers that he will not report to training camp ain’t a  mess, it’ll do till the mess gets here. Morey has a reputation for driving a hard    bargain, so teams like the Timberwolves were content to sit back and see just how  uncomfortable Simmons was willing to make it on Morey to hold out on a deal. This communication from the Simmons camp alone likely will not be enough to force Morey’s hand, but the closer we get to training camp at the end of  September, the more real this whole thing becomes.

Among the new faces for the Sixers next season are veteran defensive big man Andre Drummond, and sweet-shooting combo forward Georges Niang