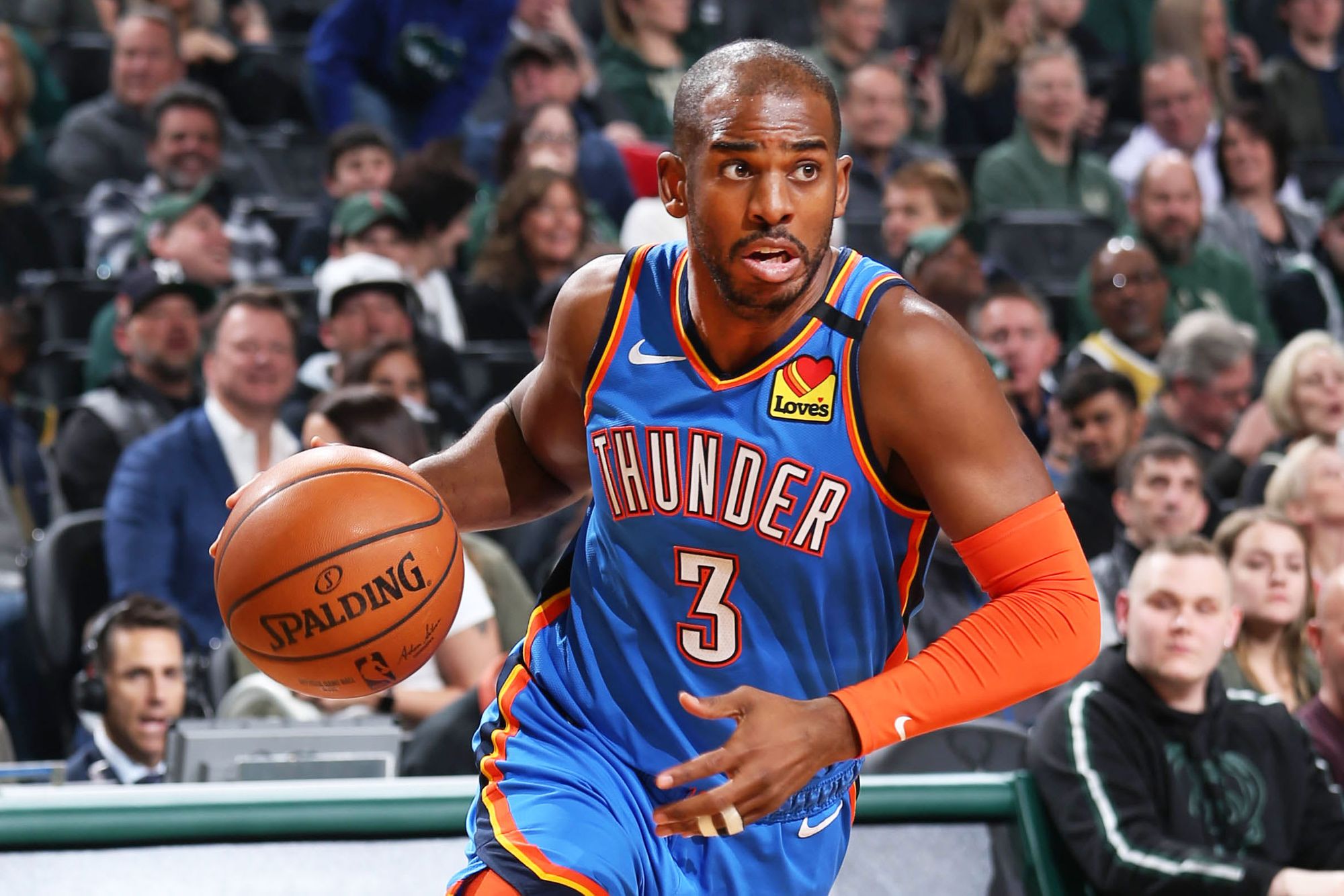 The Oklahoma City Thunder had an unexpected great run this season behind the superb leadership of Chris Paul. Most fans and experts did not even give the Thunder a chance to make the playoffs after trading Russell Westbrook and Paul George last year. The Thunder silenced their critics, as they finished fifth in the Western Conference standings and pushed the Houston Rockets to the limit in the first round of the playoffs.

But despite exceeding expectations this season, there is a growing speculation that the Thunder would eventually trade Paul. NBA insider Brian Windhorst said on ESPN's Hoop Collective podcast that there are three logical trade destinations for Paul -- the New York Knicks, the Milwaukee Bucks, and the Philadelphia 76ers. Among the three teams, Windhorst said that the 76ers might get a meeting with the Thunder because of Al Horford.

"Would the Thunder like Al Horford? I know they tried to sign him a few years ago when Billy Donovan first got there, and he went to Boston instead. They've got Steven Adams, who is extension eligible this summer," Windhorst said. "But would they take Al Horford? Because, can you imagine Chris Paul ordering Joel Embiid around? Ordering Ben Simmons around? It might actually work."

Donovan's interest in Horford is not too surprising. The veteran power forward played under Donovan, when the veteran head coach was still at the helm with the Florida Gators. Royce Young of ESPN agreed that the Thunder might be willing to take Horford in a potential deal with the 76ers, but OKC might ask for a pick or a young prospect in return similar to what they did in recent trades involving big-name players.

"Look, the Thunder are going to have to take salary back, in some regard, it's just the nature of the deal," Young said. "I think the years would be a concern. If you attach a pick, or a young player. I think the Thunder would probably view somebody like Al Horford as a good cultural fit within the organization."

If the 76ers express interest in acquiring Paul, they would still need to do some cap space maneuvering, considering the contract of the superstar playmaker. The 35-year-old point guard still has two years left in his contract, which will pay him $41.36 million next season and $44.21 million in 2022.

However, no matter how complicated it could be, Adam Hermann of NBC Sports believes that the 76ers should trade for the superstar point guard. The 76ers had another disappointing year, after getting swept in their first-round playoff series against the Boston Celtics. Hermann believes that adding Paul to their current core would do wonders for the struggling franchise.

"Trading Al Horford, a bad basketball fit, for Chris Paul, a good basketball fit, would be a home run deal for the Sixers' win-now inclinations," Hermann said. "Pairing Paul with Embiid, Simmons, and Harris would quickly turn the Sixers' starting five back into one of the best in the league, adding a Hall of Fame playmaker to a team in desperate need of a ball-handler able to get his own offense."

After their early exit in the playoffs, rumors suggested that the 76ers will likely break the superstar duo of Joel Embiid and Ben Simmons. However, 76ers general manager Elton Brand has already made things clear, insisting that they will keep Simmons and Embiid. Brand said that they would do their best to surround their superstars with the necessary pieces that they need to get over the hump next season.

"I'm not looking to trade Ben or Joel," Brand said in a news conference via ESPN. "I'm looking to complement them better. They are 24 and 26 years old, respectively. You try to make that fit as long as you can. They want to be here, they want to be with our organization, and I see them here for a long, long time."

As for the 76ers, Young said that the if they end up trading Paul, it would signal a complete rebuild for the franchise. Paul had a great season for the Thunder this year, as he averaged 17.6 points to go along with 6.7 assists and 5.0 rebounds per game. If Paul gets dealt, Young is also expecting that the Thunder would also part ways with other veteran players like Dennis Schroeder and Steven Adams.

"By all appearances, once the Thunder make the move to move on from Chris Paul, that's kind of when they're going to hit the reset button," Young said. "That's when I think they'll start tearing down some of the pieces. Schroder will go. Adams might go. And they'll start to sort of begin their first ever rebuild since they moved to Oklahoma City."

Giannis Antetokounmpo Would Be an Ideal Fit to the Phoenix Suns

The Milwaukee Bucks are in danger of having an early exit in the 2020 NBA Playoffs, as they are currently down in their series against the Miami Heat. NBA fans and experts are eagerly awaiting the result of the Bucks-Heat series because it will decide not only the team who would advance to the Eastern Conference Finals, but it could also become a factor in the future of Bucks superstar Giannis Antetokounmpo.

If the Bucks fail to go deep into the playoffs this season, there is a growing speculation that Antetokounmpo will ask Milwaukee to trade him. If Antetokounmpo asks for a trade, Duane Rankin of the Arizona Republic said that the Phoenix Suns should make a strong run for the reigning NBA Most Valuable Player.

Like any other team, getting Antetokounmpo would put them in another level, but Rankin also feels that moving to Phoenix would benefit Giannis. He pointed out that Antetokounmpo would have a better supporting cast around him, led by All-Star guard Devin Booker and veteran playmaker Ricky Rubio.

"Antetokounmpo playing alongside all-star Devin Booker would give the Suns as lethal a 1-2 punch there is in the league," Rankin said. "He'd be surrounded by shooters, have a point guard who can set him up in halfcourt and in transition in Ricky Rubio and play for a very good coach in Monty Williams. The ball-sharing Suns would be extremely hard to guard with Antetokounmpo, who has developed into a playmaker."

Getting Antetokounmpo in a trade would be easier said than done for any interested team, but the Bucks might be forced to deal him instead of losing him for nothing after next season. Antetokounmpo will become an unrestricted free agent in 2021. Rankin feels that the Suns would have a chance to acquire him if they offer former first overall pick DeAndre Ayton, Ty Jerome, and Kelly Oubre Jr.

The salaries of Ayton, Oubre, and Jerome would almost match the $27.5 million contract of Antetokounmpo for next season. While the deal looks in favor of the Suns on paper, Rankin believes that it would benefit the Bucks as well, as they would get pieces who could contribute significantly to their team for a player who could just walk away for good when he becomes a free agent.

"While this looks advantage Phoenix, Milwaukee could have a young, gifted big man with all-star potential and a wing player with explosive talent and high two-way capabilities," Rankin said. "Pair Ayton and Oubre with all-star Khris Middleton, Eric Bledsoe and Lopez and that’s a very formidable starting lineup. The Bucks certainly wouldn’t be the same without Antetokounmpo, but they’d remain a playoff team with Ayton and Oubre."

The Golden State Warriors are keeping their cards to their chest at this point, but most fans and experts are expecting that they would trade the second overall pick in the 2020 NBA Draft for a player who could help them contend for a title next season. Even if the playoffs are still not over, the Warriors are already being linked to several possible trade targets in the offseason.

According to Tony Pesta of Blue Man Hoop, Washington Wizards superstar Bradley Beal should be on top of their list of targets. Pesta said that while Beal is no Kevin Durant, adding him to their roster would give the Warriors another deadly scoring option, which would make it more difficult for opposing teams to defend them.

"Much like their days with Kevin Durant, opposing teams will have to pick their poison when playing the Warriors," Pesta said. "Of course, Beal is nowhere near the player Durant was. But, it goes without saying he is more than capable of being a third scoring option for the Warriors. In fact, he could even be a more potent scorer than Thompson if the Dubs choose to give him enough usage."

However, it remains to be seen whether or not the Wizards will deal Beal in the offseason. From the looks of it, the Wizards are likely to give the Beal-John Wall duo another try, which means that the earliest that Warriors can trade for Beal would be before the trade deadline if the Wizards fail to make an impact early next season.

Beal is coming off the best season his of his eight-year NBA career. The 27-year-old superstar averaged career-highs 30.5 points and 6.1 rebounds to go along with 4.2 assists and 1.2 steals per game. He is in contract until the end of the 2021-22 season with a player option for the 2022-23 NBA season after signing a two-year, $71.8 million contract extension with the Wizards last year.