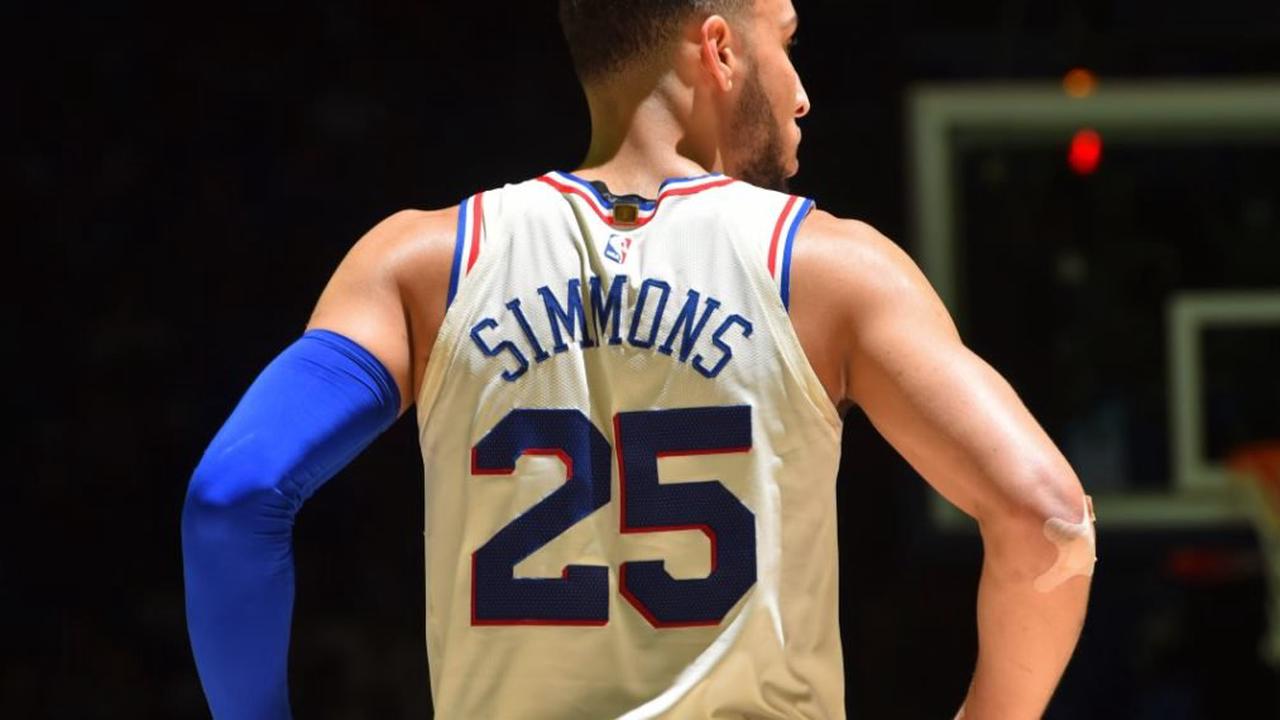 It is becoming more and more apparent that the feud and holdout between the Philadelphia 76ers organization and All-Star Ben Simmons will not be solved easily on its own. It is being jointly reported by ESPN’s Tim Bontemps and Brian Windhorst that the Sixers front office made a decision of not paying Simmons a part of his salary that he was supposed to be owed last Friday, a move that obviously puts a lot of pressure on Simmons and provides a clearer picture of how the Sixers organization will approach this controversial impasse.

Simmons, who just turned 25 years of age last July, has made it known a couple of weeks back that he is already bent on not participating in any Sixers activities and preparations for the upcoming season. His relationship with the team turned a bit sour after his forgettable performance in the 2021 NBA Playoffs when he and the Sixers lost to Trae Young, Bogdan Bogdanovic, John Collins, Clint Capela and the Atlanta Hawks in the second round. During that series, it was obvious that he struggled with his confidence and overall value to the team, especially with how the Hawks exposed his limitations on the offensive end of the floor.

In that joint column written by Bontemps and Windhorst, it was also reported that the Sixers front office also plan to deduct every fine that Simmons will take in if this holdout between the two parties continue throughout the season. The Sixers already logged their first preseason game recently against the Toronto Raptors, and based from the ESPN article, Simmons is expected to be fined an estimate of $227,000 since he did not return to the team in time for the start of the 2021-22 NBA Preseason games.

The Philadelphia 76ers did not pay Ben Simmons the $8.25 million -- 25% of his contract -- that he was owed Friday and placed that money into an escrow account, sources told ESPN. Moving forward, the 76ers will deduct from the account any fines that Simmons accrues as the season progresses. If, or when, Simmons shows up, he will be given the money that is remaining in it, sources   told ESPN.

The next line of demarcation in this saga will come Monday, when the 76ers play their first preseason game in Toronto against the Raptors. If Simmons doesn't return to the team before that game, he will be fined roughly $227,000 -- the same number Simmons will be fined for every game he misses going forward. Sources  told ESPN that in the meeting between Simmons and Philadelphia's leadership last month, the team made Simmons aware that this was a possibility -- and, at the time, Simmons responded by saying that he understood that, and that it would not change his stance either on reporting to Philadelphia or rescinding his trade request.

Simmons, who plays the primary playmaker role for the Sixers while also standing at a 6-foot-11 lengthy frame, is already one of the most versatile players in the league. Despite his inability to shoot from the outside, Simmons packs an intriguing skill set on both ends of the floor. On the offensive end of the floor, he has the ability to make accurate passes and facilitate the Sixers’ half-court sets. He is also a deadly open court finisher as he can handle the ball well and he has an explosive first step that allows him to blow past defenders and drive down the lane for strong finishes around the rim.

However, Simmons’ trump card lies on the defensive end of the floor. Despite his tall and lengthy frame, he is mobile enough to effectively keep up with quicker and smaller players while also strong enough to defend bigger frontcourt players in the post. His effective switchability on the defensive end of the floor and his willingness to defend the best players on the opposing teams make him quite a valuable asset for any team.

Simmons has just logged four years in the league, but he already achieved a lot of individual milestones that not a lot of NBA players reach even in the entirety of their respective careers. He has already compiled three All-Star appearances to his name, and he led the league in steals per game during the 2019-20 NBA Season. It does remain to be seen if he can still produce a consistent outside shot, but it is without a doubt that he is already one of the best and most elite two-way players in the league at this early stage of his career.

Even though the situation is already as messy as it is right now, Sixers president of basketball operation Daryl Morey still believes that there is a chance that Simmons can come back to the team and help them win a championship this season. It is indeed an improbable task and even an insurmountable challenge, and it seems like Morey is just trying to sound optimistic even if the situation is already a tricky problem to solve. The difficult thing about this ordeal is that the Sixers will find it hard to find a suitable trade partner for Simmons’ services, and receive a quality package of star players and valuable assets in return. This is the reason why the situation has to look better, and why Morey still wants to claim that there’s still hope that the impasse will eventually see its end, as per a column written by Tim Bontemps for the ESPN.

"I think there's a lot of hope," Morey said Monday morning during his season-opening news conference alongside coach Doc Rivers. "I would say I watched last night a player lead his team to victory when a thousand pounds of digital ink were spilled on how much he would never play for that team again. Look, every situation is different, but we have a lot of optimism that we can make it work here.

I'd say we're not going to talk about the specifics of fines or things like that, but I will say it's pretty clearly spelled out in the CBA and in his contract what happens. Ben is a very good player, a big part of this team," Morey said. "We are  disappointed he's not here. We're making our choices, but we're excited about the players who are here. We're going to focus on them, and we're taking our journey to be a championship team. We don't know exactly what that will be. In terms of what trades or non-trades, I only have one focus, and that's to do what gives us the best chance to win a championship."

But of course, this Sixers squad is still primed to contend for a playoff spot even without the help of Simmons. They still have an MVP-caliber superstar on their ranks, and that is in the form of All-Star big man Joel Embiid. Embiid, who turned 27 years of age last March, is coming off a career-best season in which he put up an all-around stat line of 28.5 points, 10.6 rebounds, 2.8 assists, 1.0 steals, and 1.4 blocks per contest. He also shot a very efficient set of shooting percentages, including an excellent 51% overall clip from the field, a tremendous 37% clip from the three-point line, and an outstanding 86% clip from the free throw line.

Embiid, who was the 3rd overall selection in the 2014 NBA Draft, sat out his first two years in the league due to a major foot injury. However, it was evident that he was very talented right from the get-go as he immediately made his presence felt in his rookie year when he put up a tremendous stat line of 20.2 points, 7.8 boards, 2.1 assists, 0.9 steals, and 2.5 blocks per contest, while also logging just 25.4 minutes in the 31 games that he logged in for the Sixers that season.

Embiid would then continue to be a centerpiece of the Sixers franchise as he notched four straight All-Star appearances in the next four years. Before he was drafted to the NBA, the notion and perspective on his talent was that he will be a very good defensive big man. That proved to be very true as Embiid is one of the few big men in the league who is also the defensive anchor of their respective teams. But Embiid also proved to everyone that he has what it takes to be a leader on the offensive end of the floor as he has a good inside-outside scoring skill set, and he can make the right passes when he is double-teamed.

But now that the team is in an unfamiliar territory in its messy situation with Simmons, it will be Embiid’s leadership that will be tested. As per an article put up by Rich Hofmann of The Athletic, Embiid said that the situation is indeed disappointing and disrespectful to the team. He pointed out that he does not see the Sixers’ roster makeup as the problem in the situation, and that he is still hoping that Simmons will return to the team.

“Like I said, it is disappointing. But I feel like over the years, the way our team has been built around — like you look at last year, you got the whole starting lineup shot — I was the worst 3-point shooter in the starting lineup, and I shot 38 percent from 3. We’ve always had shooters, and I feel like I can really play with anybody and I can make anybody be better on the court. We don’t necessarily need shooters, but I feel like over the years, you look at like when we signed Al (Horford), it’s because we needed a stretch five just to make sure that was formed. Most of my career I’ve had to kinda step out to the 3-point line, which I don’t mind. I like to be a basketball player. I like to do everything on the basketball court. But I feel like our teams have been built, whether it’s the shooting needed or the stretch five and all that stuff, I feel like we’ve had it here.

And we still have (shooting). We’ve got Seth (Curry), like I said, one of the best 3- point shooters ever. Danny Green, Tobias (Harris) is a 40 percent 3-point shooter. Furkan (Korkmaz) coming off the bench, at times Shake (Milton) I think can be a better shooter, but you know, he can get hot. We just added Georges (Niang). So I   feel like our teams have always been built around his needs. So it was kind of surprising to see. I’ll always say that even going back to, I mean the reason we signed Al is (him). We got rid of Jimmy (Butler), which I still think was a mistake, just to make sure that he needed the ball in his hands and that’s the decision they made.”

With Simmons and Embiid sitting out last night, the Sixers lost their first preseason assignment to the hands of the Toronto Raptors. Andre Drummond, one of their new acquisitions in the offseason, hauled in a double-double performance of 19 points and 14 rebounds, and also added three assists and four blocks to his tally. Along with Drummond, Isaiah Joe also come up with a good game for the Sixers as he came off the bench to finish with 18 points, 3 rebounds, 3 steals, 1 assists, and 1 blocks.

The other Sixers players who put up double digits in the scoring column are sweet-shooting combo guard Seth Curry, who tallied 14 points, 4 steals, and 2 assists. Furkan Korkmaz also came off the bench to contribute 13 markers and 4 boards, while sophomore scoring point guard Tyrese Maxey came through with 10 points and 3 assists. Along with Embiid and Simmons, the other Sixers player who sat out the game was scoring forward Tobias Harris.