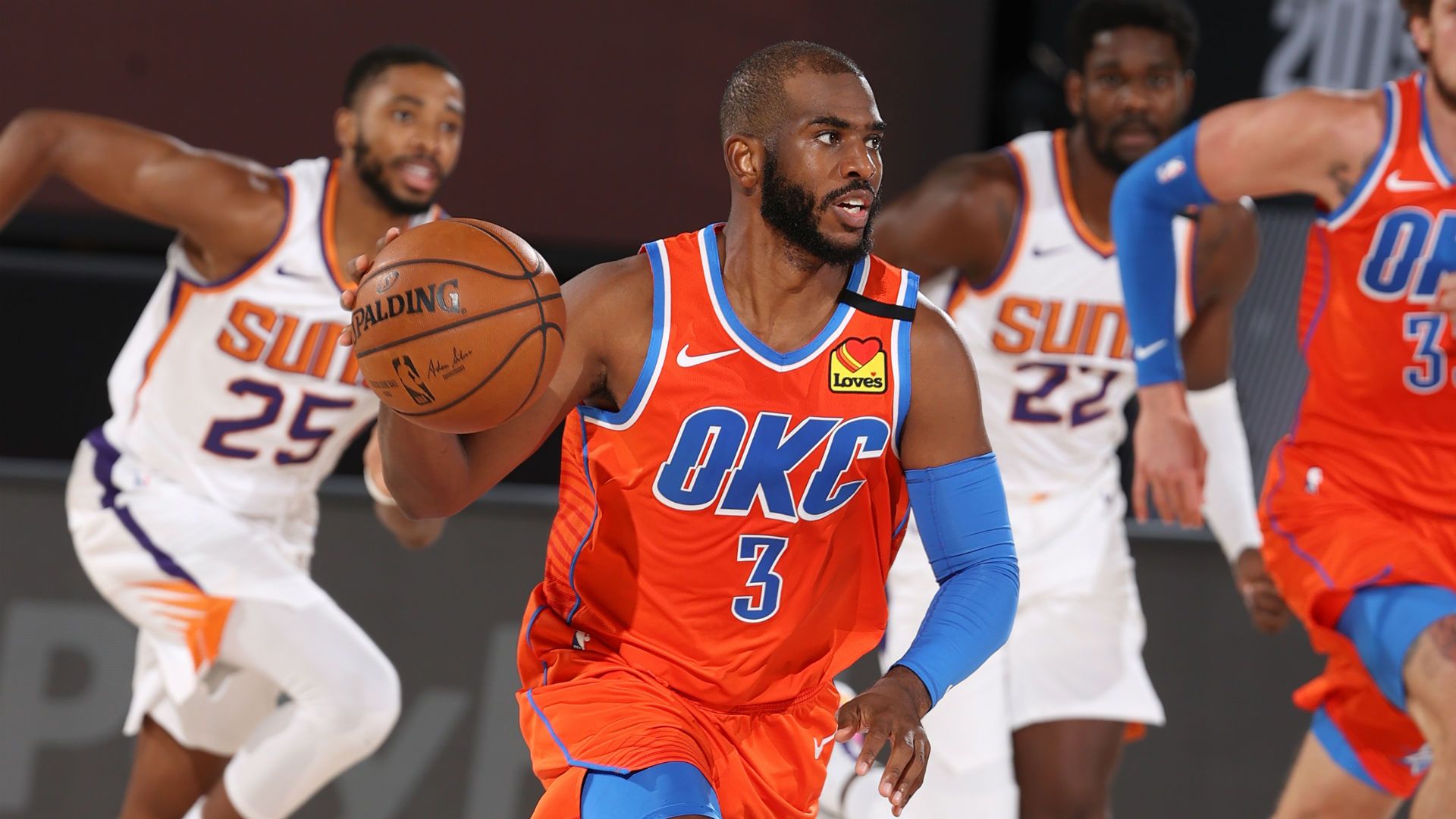 The Phoenix Suns have made themselves a strong player in the stacked Western Conference next season after striking the first blockbuster trade this offseason. Phoenix got a huge boost to their roster after acquiring superstar guard Chris Paul from the Oklahoma City Thunder on Monday. The big trade came after the Suns went perfect during their eight-game stint inside the NBA bubble in Orlando, Florida.

According to multiple reports, the Thunder also acquired Abdel Nader in exchange for Kelly Oubre Jr., Ricky Rubio, Ty Jerome, Jalen Lecque, and a 2020 first-round pick. The blockbuster trade has already been finalized just hours after the league ended the trade moratorium on Monday afternoon. In a statement, Suns general manager James Jones expressed confidence that Paul's arrival will have a huge impact to the team next season.

"We are excited to welcome Chris Paul and Abdel Nader to Phoenix," Jones said."Chris’ leadership and competitive approach to the game will have an immeasurable impact on our team. Abdel possesses all the traits on and off the court that will complement our culture."

Suns head coach Monty Williams, who will be entering his second year in Phoenix, was also elated with the arrival of the superstar playmaker. Williams is no stranger to coaching Paul, having spent time with him during his stint with New Orleans during the 2010-11 NBA season. The Suns coach said that Paul is the kind of player that makes an organization and the players around him better.

Paul is coming off a resurgence season after leading the young Thunder squad to a fifth-place finish in the stacked Western Conference during the regular season. The 35-year-old superstar was traded to the Thunder last year for Russell Westbrook, and made immediate impact in OKC, as he is often credited for the quick development of young cornerstones like Shai Gilgeous-Alexander and Lu Dort.

Paul averaged 17.6 points on 48.9 percent shooting from the field to go along with 6.7 assists, 5.0 rebounds, and 1.6 steals per game last season. The former Wake Forest standout made the All-NBA team for the first time since 2016 after leading the Thunder to a surprising playoff stint in the West. Before the season started, no one expected the Thunder to make the playoffs after trading away superstars Russell Westbrook and Paul George last year.

Who Won the Suns-Trade Trade?

Even before the trade moratorium was lifted, reports have already surfaced that the Phoenix Suns are interested in trading for Paul, who was tipped to be on the trading block because the Thunder are expected to go on a rebuild. However, there were doubts about the possibility of the trade because of Paul's age and his expensive contract that would pay him $85.56 million in the next two years. However, Shams Charania of The Athletic pointed out that the Suns knew that they had to take a gamble if they want to become a factor in the Western Conference.

"Considering Chris Paul is 35 and owed $41.3 million this coming season, and has a $44.2 million player option in 2021-22, it’s a significant and costly gamble for the Suns to make this trade in a loaded Western Conference," Charania said. "But because they’re in a loaded Western Conference, they’re aware that sometimes you have to swing for the fences to cut through the thicket of the playoff picture."

The Suns turned a lot of heads when they swept their bubble assignments. Their run in Orlando was not enough to earn them a spot in the playoffs, but it became a signal that the Suns have a chance to compete in the stacked Western Conference. The front office is aware, though, that they need a leader to sustain the momentum and help rising star Devin Booker maintain his high level of play, which Paul is capable of as proven by his stint in OKC.

"CP3 just did a masterful job of leading a mixture of veterans and youth in OKC,"Charania said. "That first year of Paul in a team’s culture is always a breath of fresh professional air. He focuses you. He lets you know what works and doesn’t work at the NBA level. CP3 doesn’t let you lose sight of the consistency it takes to win games. That’s exactly the challenge Williams had in his first year coaching the Suns."

Charania is convinced that the trade, despite giving up four players and a first-round pick, made a lot of sense for the Suns, as Paul will help the stay focused for an entire season. His arrival is also expected to make Booker a perennial All-Star and a possible All-NBA team candidate next season. Former first overall pick DeAndre Ayton is also tipped to have his best year in the league with Paul as his main pick-and-roll partner next season.

As for the Thunder, Charania thinks that it was another massive move for general manager Sam Presti. The Thunder was able to acquire an additional pick and players who could help them next season or players who they can trade to earn more draft assets. It is worth noting that the Thunder also acquired the 28th overall pick in the 2020 NBA Draft along with Danny Green from the Los Angeles Lakers in exchange for Dennis Schroder.

"The Thunder have movable veterans in Ricky Rubio and Kelly Oubre if they want to flip those players at some point," Charania said. "That’s the plan for Presti and the Thunder moving forward as they search for their next building blocks. They’ve become an HGTV show about flipping assets to keep building and building their wealth. It’s just that the Thunder’s wealth lies in the assets they’ve accumulated so far."

The trade will also jumpstart a massive rebuild for the Thunder franchise with budding star Shai Gilgeous-Alexander as their cornerstone. SGA had a productive sophomore season this year under Paul's mentorship. The former 11th overall pick, who was sent to the Thunder as part of the Paul George trade, averaged 19.0 points on top of 5.9 rebounds and 3.3 assists per game last season.

Can the Houston Rockets Find a Taker for Russell Westbrook?

Russell Westbrook reportedly wants out of the Houston Rockets, but it remains to be seen whether or not his wish would be granted this offseason. Westbrook is a one-time NBA Most Valuable Player but is reportedly getting little interest on the trade market at this point of the offseason. The 31-year-old posted big number last season, but there are concerns about his massive contract, as he still has three seasons left in his five-year, $206.79 million deal.

When the news about his desire to be traded broke out, the New York Knicks and the Los Angeles Clippers were immediately mentioned as potential destinations for the disgruntled superstar. According to Andy Bailey of Bleacher Report, the Rockets should not demand for a lot of first-round picks for Westbrook. It can be remembered that Houston traded Chris Paul, two first-round picks, and two picks swaps for Westbrook last year.

In a deal with the Knicks, Bailey thinks that getting Wayne Ellington, Bobby Portis, Frank Ntilikina, Kevin Knox, and second-round pick would already be an ideal trade-off for Houston. Ellington and Portis are both on expiring deals, while Ntilikina and Knox could be a part of their future. This deal makes sense for Houston because the Knicks could have asked for picks as well for taking Westbrook's contract into their books.

"The Rockets may have visions of first-round picks dancing in their heads, but those may be tough to secure in a Westbrook trade. Again, that contract is a nightmare," Bailey said. "If the Rockets hadn't already spent almost all their draft capital to acquire Russ last offseason, teams might actually be asking them for sweeteners for taking on the rest of his deal. Even without high-end draft considerations, this particular trade helps Houston on a few fronts."

On the other hand, Bailey thinks that a trade between the Clippers and the Rockets is harder to execute because both teams are considered contenders in the Western Conference. But if the Rockets are to negotiate a deal with the Clippers, he thinks that Houston should send Westbrook and second-round pick to Los Angeles in exchange for Patrick Beverley, Lou Williams, Ivica Zubac, Rodney McGruder, and Mfiondu Kabengele.

"The huge boost in depth, return of a traditional center and a young prospect for Houston makes the deal unbalanced without any draft picks, but the Rockets are about as tapped out as a team can get on those," Bailey said. "If they want this much, they might have to attach a sweetener to Westbrook's gargantuan deal."

Bailey admitted, though, that it is hard to believe that the Clippers are interested in acquiring Westbrook, who would not be a good fit alongside superstars Kawhi Leonard and Paul George. The Clippers are reportedly looking for a new starting point guard, who could become their main playmaker. Rajon Rondo is reportedly a target, which means they are looking for a facilitator instead of a high-scoring point guard.