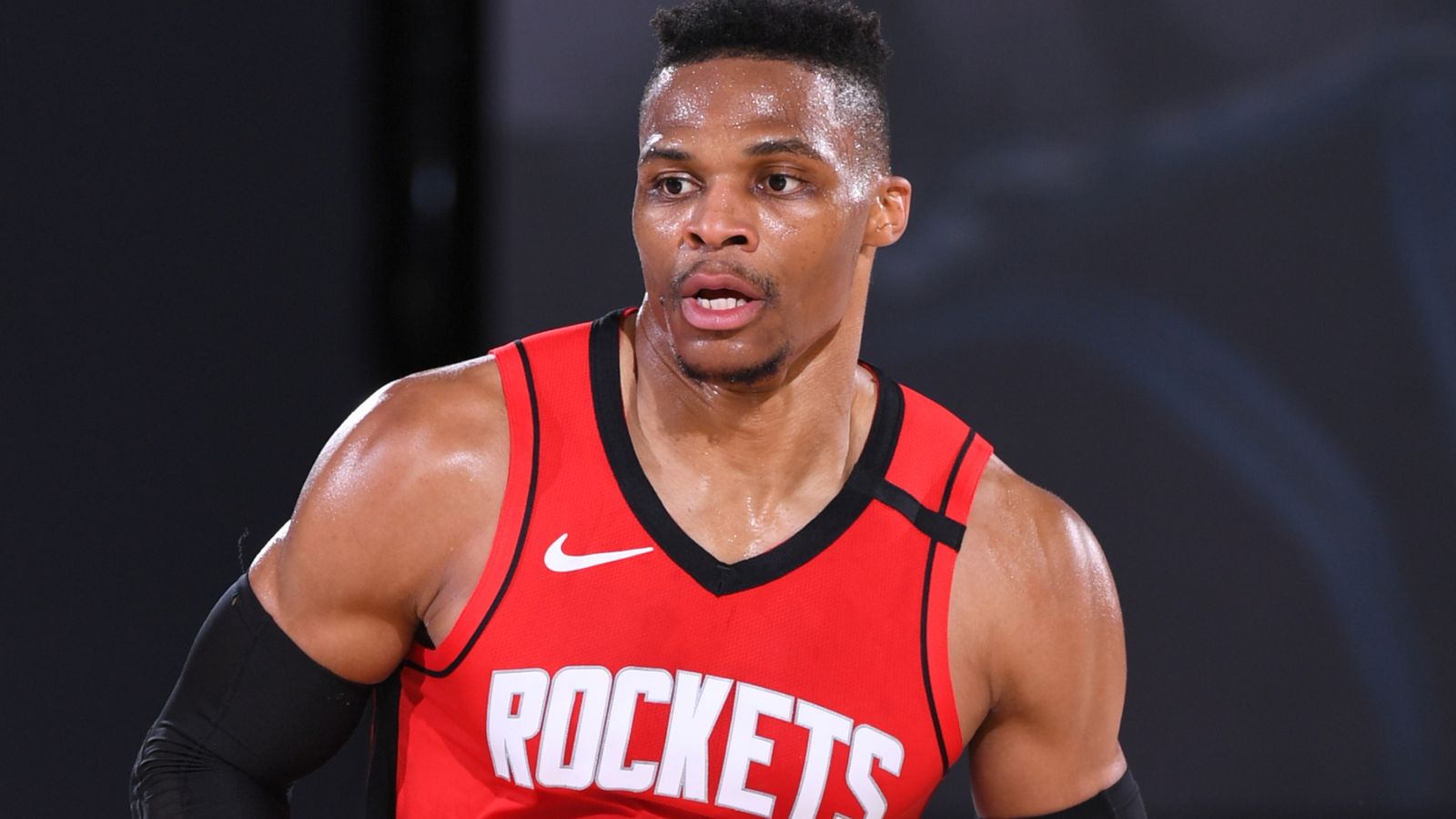 NBA Trade Buzz: Russell Westbrook Could Be Traded Before Next Season

The Houston Rockets are ushering a new era after they parted ways with former head coach Mike D'Antoni and former general manager Daryl Morey. Houston hired Stephen Silas as their new coach and promoted Rafael Stone as their new manager. Silas and Stone will have their hands full, though, this offseason, as reports revealed that Russell Westbrook is no longer happy in Houston.

Westbrook was trade to the Rockets last year and Houston had to give up a lot for him, including superstar point guard Chris Paul. The Rockets had high expectations on their team last season with Westbrook and James Harden leading the way for them. However, Houston failed to live up to their billing, as they were easily ousted by the Los Angeles Lakers in the second round of the 2020 NBA Playoffs.

And following their early exit in the postseason and the changes they made up front, Shams Charania of The Athletic revealed that Westbrook wants to be traded this offseason. The former NBA Most Valuable Player is reportedly uneasy with his role in Houston and was unimpressed with the team's culture during his first year with the franchise. It has already come to a point that he has already informed the team about his desire to be traded.

"Westbrook, who has three years and $132 million remaining on his deal, has expressed the sentiment to Houston officials," Charania reported. "Westbrook has informed team officials that he has been uneasy about the team’s accountability and culture, and wants to join a team where he can have a role similar to his prior, floor-general role in Oklahoma City."

Westbrook and Harden have already played together before, which was the main reason why most experts believed that the Rockets would be a force to reckon with last season. It was actually Harden who convinced the Rockets front office to trade for Westbrook last year. However, reports revealed that there were a lot of undesirable stuff happening behind the scene.

Based on the report from Charania, Westbrook appeared to be surprise of the how things are being ran in Houston, which he thinks is very different from what he was accustomed to in Oklahoma City. The mercurial guard reportedly made the front office aware of his displeasure throughout last season, and was also on Harden's ear most of the time, which resulted to several verbal tussles last season.

"Westbrook, sources say, has made it known for quite some time now that he would like to see significant changes to the Rockets’ culture," Charania said. "Specifically, his desire for more team-wide accountability, discipline and structure have been the focus of talks with team officials. Throughout the season, Westbrook was the consistent presence who kept Harden accountable and the two close friends had several verbal exchanges."

It remains to be seen whether or not the Rockets would give into the demand of Westbrook because there is no pressure on their shoulders simply because the athletic guard is not on an expiring deal. Stone recently said that despite the departure of Morey and D'Antoni, their goal next season remains the same and he will do everything in his power to keep the Rockets competitive in the stacked Western Conference.

"We’re still all-in," Stone said via New York Post. "Our goal is to win a   championship. We’ll do anything we can to get us closer to that goal. The good news is we have really, really good basketball players. I’m getting a talented roster that has already won; not to the level we want but won in a big way. It’s about being very smart to keep the good stuff and be additive. You don’t want to do anything rash. You want to see if there are changes that will help."

As for Harden, Charania reported that the high-scoring guard wants to remain in Houston and is actually preparing hard for the upcoming season, which is set to start on December 22. The Rockets are committed to building a contending team around Harden. The superstar guard is reportedly in talks with the front office on how they can build a stronger roster in time for next season, per Adrian Wojnarowski of ESPN.

"Harden, who has said publicly several times that he hopes to play the remainder of his career in Houston, has expressed similar urgency in the past several offseasons about improving the Rockets' chances to win a championship," Wojnarowski said. " He remains engaged in discussions with Houston's front office about potential personnel moves this offseason."

However, Westbrook might not be the only player who could eventually request to move out of Houston. Charania reported that the starting center PJ Tucker also has his displeasure over how the Rockets handled his contract situation. Tucker has expressed desire to play the rest of his career in Houston, but it remains to be seen how his contract status and Westbrook's trade demands will change his outlook.

"Tucker, who signed for around $8 million a season back in 2017, has seen other ‘Three-and-D’ wings around the league receive paydays in less important situations than a key starter for a contender and believes he is worthy of a raise," Charania reported. "Tucker, sources said, has stated his intent to finish his career as a Rocket for a long time but felt insulted by Houston’s decision to delay extension discussions."

Veteran guard Eric Gordon is also feeling uneasy over his diminishing usage rate in Houston, particularly last season. The 31-year-old averaged 14.4 points in 28.2 minutes, which is his lowest in his entire career. Gordon also started in just 15 games for the Rockets last season. The former Sixth Man of the Year is not asking for a starting spot, but he reportedly wants a more defined role in Houston.

Gordon's case is similar to Danuel House, who was reportedly vocal about his desire to be more involved in offense. It came to a point where he "verbally challenged" D'Antoni along with Harden and Westbrook last season. Austin Rivers is unlikely to return to Houston next season, as he is set to become a free agent. Rivers was also unhappy with how he was utilized by D'Antoni last season.

The problem that surrounded the locker room of the Rockets last season is reportedly a product of the "problematic" culture within the roster. Westbrook reportedly wants more accountability and has voiced out his concerns numerous times last season. However, Harden, who was expected to be a strong locker room presence as well, was not too open to accepting criticisms.

"When it came to Harden, however, he wasn’t as receptive to criticism as other teammates," Charania reported. "Former teammates have described the culture in Houston as problematic, sources said, highlighting a situation that caters far too much to its stars. One example cited was the case of Trevor Ariza, who left the team in 2018 in search of more money, but also more respect."

It remains to be seen how the Rockets will address the issues, including Westbrook's trade demands. Westbrook is looking for a resolution before the new season kicks off. This might force the Rockets to make significant roster moves that would include not just Westbrook. Charania mentioned that the Rockets might eventually join the race to acquire Jrue Holiday, who is reportedly being shopped by the New Orleans Pelicans.

Brian Whitt of NBC Sports had an interesting take related to the current situation in Houston. Whitt said that the Golden State Warriors should reach out to the Rockets about a possible trade. He pointed out that the Warriors have the necessary assets to convince the Rockets if they want to shed salary. Aside from picks or young players, Golden State could include the huge $17.2 million trade exception that they own.

"It just so happens that Houston is loaded with potentially available wings, and Golden State has the perfect method to acquire one," Whitt said. "The Warriors' massive $17.2 million trade exception expires later this month. With it, they can absorb any player whose salary is equal or lesser to that value, and there are two Rockets players in particular who would qualify."

Whitt said that the Warriors should try to trade for Tucker or Robert Covington, who both have the skillset that the Warriors usually need. Covington is known for his defense but can also shoot from the perimeter. Tucker, on the other hand, plays the same role as Draymond Green. Whitt said that Golden State should take advantage of the situation, knowing that the Rockets are likely more than willing to get either forward off their payroll.

"It could be a win-win for both sides," Whitt said. "The Warriors would get the key veteran piece they're looking for without giving up any additional value beyond the trade exception, which will expire in a matter of weeks whether they use it or not. Meanwhile, the Rockets would move Covington or Tucker off the books, and possibly add a future draft pick or two. Both sides have the requisite motivation to get this kind of deal done."