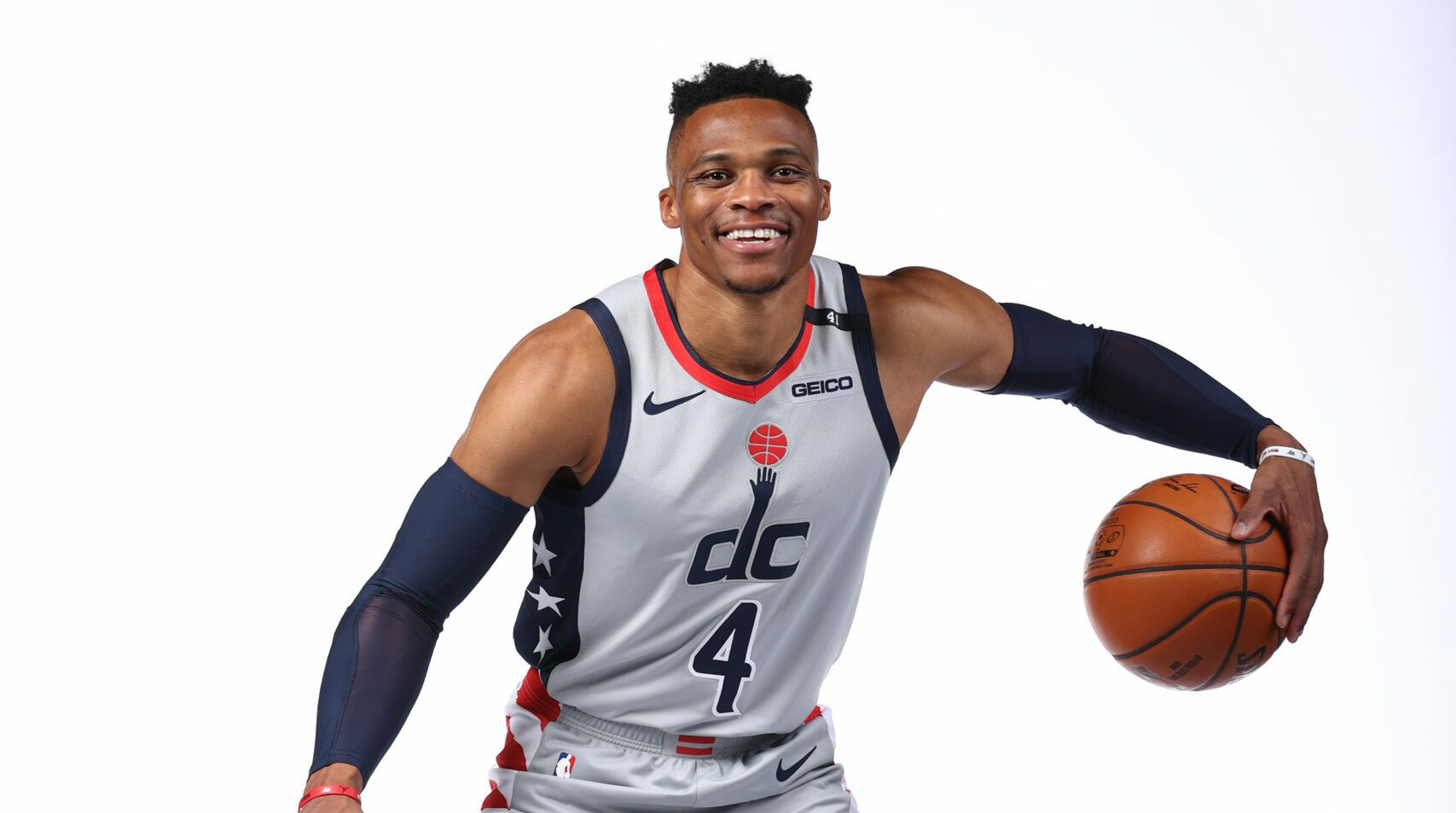 Russell Westbrook wanted out the Houston Rockets because he was reportedly shocked with the culture in the franchise. Westbrook got his wish after he was traded to the Washington Wizards, and the former NBA Most Valuable Player is happy with where he is at right now.

Westbrook, who was traded to the Wizards in exchange for John Wall and a future first-round pick, has already joined his new team in their preparation for the upcoming season. The 32-year-old point guard declined to discuss his reported trade request to the Rockets, but he sounded elated with where he landed.

The nine-time NBA All-Star had a tumultuous first year in Houston, where he was dealt last year in exchange for Chris Paul and future picks. Westbrook averaged 27.2 points to go along with 7.9 rebounds and 7.0 assists during the regular season, but he failed to get into his rhythm during the NBA restart inside the Orlando bubble. In turn, the Rockets failed to maximize their title chances, losing to the Los Angeles Lakers in the second round of the playoffs.

Rockets superstar James Harden was the one who pushed for the Westbrook trade when he became available after the Oklahoma City Thunder sent Paul George to the Los Angeles Clippers. Westbrook and Harden are good friends and were former teammates in Oklahoma City, but their off-court relationship did not result to great chemistry inside the hardcourt, which made the split inevitable.

In Washington, Westbrook will be playing together with another high-scoring guard in Bradley Beal. Beal had the best season of his eight-year career after averaging 30.5 points to go along with 6.1 assists and 4.2 rebounds last season. Westbrook said that he is every excited to team up with Beal, saying that he has been a huge fan of his new backcourt partner's game.

"I have always been a huge fan of his game," Westbrook said of Beal via Ohm Youngmisuk of ESPN. "He goes and compete. He's like a silent assassin. Once the game starts, he goes and gets to it. I am excited to play alongside him and help him in any way I can."

Westbrook, who will be entering his 13th season in the NBA, will also be reunited with Wizards head coach Scott Brooks, who once coached the enigmatic guard in Oklahoma City. Brooks surely knows what he will be getting from Westbrook when he finally steps on the court in a Wizards uniform.

Brooks said that Westbrook's arrival will have a huge impact to the entire team. The veteran head coach expects that his players will gain more confidence playing alongside Westbrook, particularly big men Thomas Bryant and Davis Bertans. Brooks said that the Wizards got a proven leader in Westbrook.

"Another thing that he does at an extremely high level is he creates confidence in players," Brooks said via NBC Sports. "I think with Russell, and now with Brad, we have two guys who are going to help our players need that and fill those voids that they'll have at times because it's a hard league to excel in and play well. But you have two guys like we have now, that are really going to really benefit from their intensity."

The 55-year-old head coach revealed that Westbrook immediately set the tone right in his first day in the office. Brooks, who will be coaching in his fifth season in Washington, said that Westbrook was in the gym three hours before the scheduled practice, per Chase Hughes of NBC Sports.

John Wall Expecting to Play With James Harden in Houston

Meanwhile, former Wizards superstar John Wall also had his first day in Houston. During a press conference, Wall did not dodge questions about his new teammate, who was missing in action in training camp. James Harden's absence stirred speculation that the disgruntled guard is really forcing his way out of Houston.

However, Wall is not worried at all, saying that he had numerous conversations with Harden since the trade was consummated. The 30-year-old point guard downplayed Harden's non-appearance in their recent workouts, pointing out that the team is just following the league's Covid-19 protocols.

Wall is also aware of the reports that Harden wants out of Houston, with multiple reports linking him to a possible move to the Brooklyn Nets and most recently to the Golden State Warriors. The five-time NBA All-Star confidently said that he is expecting to play alongside Harden in the upcoming season, adding that his new superstar teammate remains committed to the Rockets franchise.

"For sure," Wall said when asked if he thinks he will be able to share the court with Harden in Houston. "That was the main reason why, talking through this whole process of what was going to happen with this trade, if it happened or did not happen. One of the reasons was we wanted to play together. I have 100 percent belief  he wants to be with this organization, see what happens with this team and see where we can go."

NBA insider Adrian Wojnarowski of ESPN recently revealed that Harden gave his stamp of approval on the Westbrook-Wall trade. The reigning scoring champion reportedly prefers playing with Wall than Westbrook. Wojnarowski clarified that it is not a guarantee that Harden will commit to the Rockets in the long run, although he also recognized that Houston still has control of the situation.

"He had a preference of John Wall over Westbrook, although in the last couple years, Harden has moved teammates in and out," Wojnarowski said. "Brought Chris Paul in, moved him out, same with Russell Westbrook now. Whether that’s going to be enough to want to be there long term, Rockets aren’t sure about that. They do have a cushion to work with; remember James Harden is under contract for two more years."

Wall will be returning from a long layoff, as he has not seen action since December 2018 after dealing with knee issues and a torn Achilles tendon. The former Kentucky standout, who will be entering the second season of his four-year, $171.13 million contract, was limited to 32 games during the 2018-19 NBA season, where he averaged 20.7 points and 8.7 assists per game.

The Brooklyn Nets have been mainstays of trade chatters this offseason, as they are reportedly looking to add a third star to play with Kevin Durant and Kyrie Irving. Several trade scenarios have surfaced when they were linked to superstars Bradley Beal, Jrue Holiday, and James Harden.

Taurean Prince, who is fresh from his first season in Brooklyn, has frequently been mentioned in trade packages in the event the Nets enter into a blockbuster deal. Prince said that he loves where he is at in his fifth season in the league, and he is also unfazed of the trade rumors involving him.

"I’ve been in the league for five years, so, I mean, I don’t think, besides this team, I don’t think I’ve ever had the same teammates halfway through the season -- on the  second half after the first half," Prince said via USA Today. "I’m kind of used to seeing new faces, and I’ve also been traded myself. The fear or that or that not wanting to happen, or however you wanna put it, is kind of gone because you’ve realized you can’t control that."

Prince, who spent his first three seasons in the NBA with the Atlanta Hawks, was dealt to the Nets before the 2019 NBA Draft and immediately got a contract extension from his new team. He repaid Brooklyn's trust in him with a solid performance last season, where he averaged 12.1 points and 6.0 rebounds in 64 games, including 61 starts. The former Baylor standout will be playing in the first season of his fresh two-year, $25.25 million contract with the Nets.

Spencer Dinwiddie, who has also been tagged as a trade chip for Brooklyn, is also not losing sleep over his future in Brooklyn. The 27-year-old point guard denied that he asked the Nets to trade him this offseason, insisting that he remains committed to the Nets. The former Colorado standout, who averaged 20.6 points and 6.8 assists last season, said that nothing has changed in terms of loyalty since he signed a three-year, $34.36 million deal back in 2018.