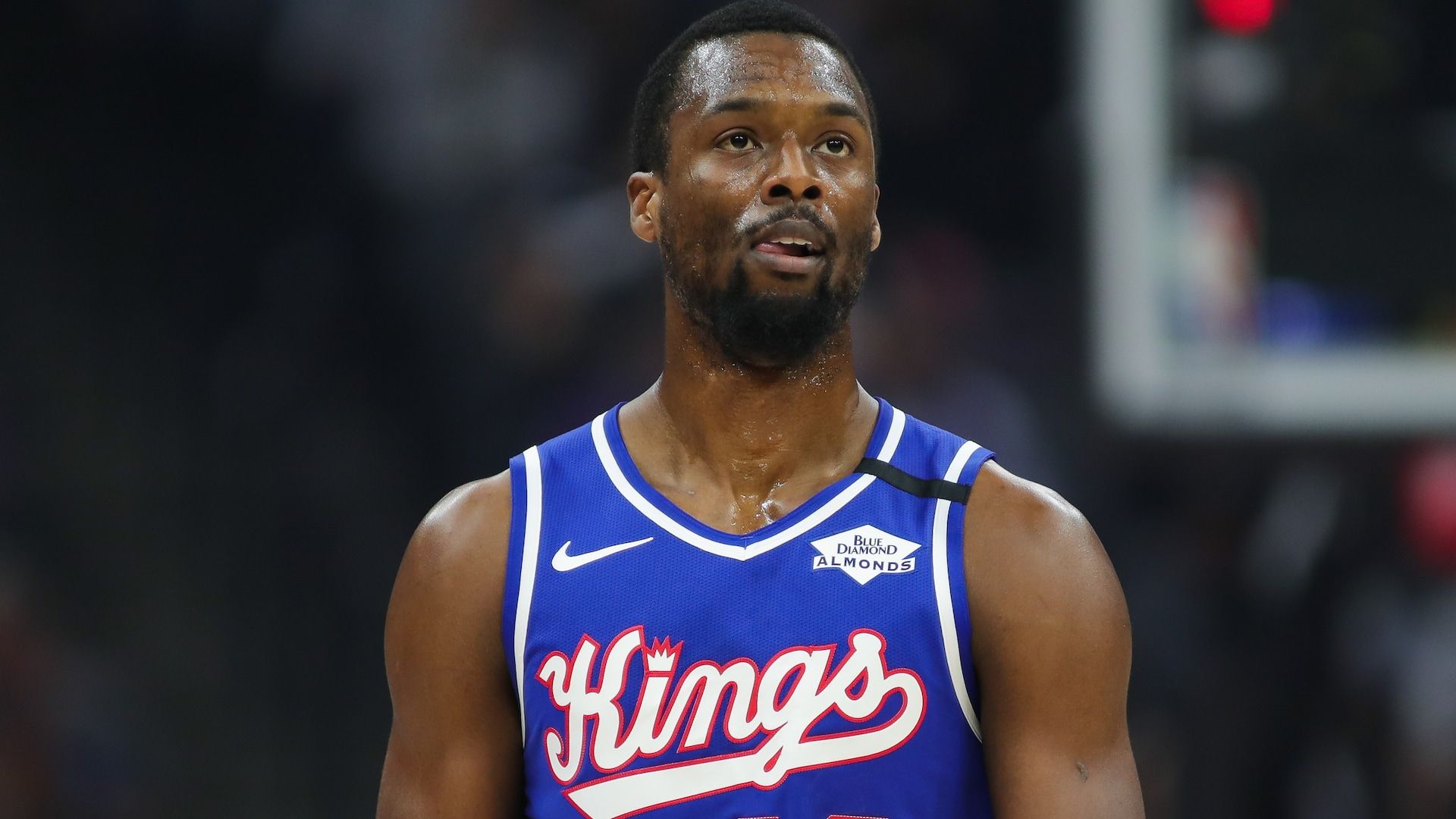 Barnes could be dealt before the trade deadline

As the March 25 trade deadline coming just around the corner, one of the intriguing names that could be an integral piece in a trade deal is Sacramento Kings scoring forward Harrison Barnes.

Barnes, who is on his third year with the Kings, is currently putting up excellent numbers of 16.6 points, 6.2 rebounds, 3.5 assists and 0.8 steals per contest, including a decent 37% clip from the three-point line. But with the Kings currently sporting a below-average record of 15 wins against 24 defeats, other teams are already gauging Sacramento’s interest in moving their key pieces.

As per Sam Amick of The Athletic, he detailed out why it would take a “significant offer” from other teams for the Kings front office to be enticed in letting go of Barnes. Amick said that the Kings are actually looking for assets or players that could help them book a playoff ticket sooner rather than later.

While this is most assuredly a “gap year,” as we wrote about recently,  the combination of Barnes’ play, his professionalism and his declining pay ($20.2 million next season; $18.3 million in 2022-23) is such that it will take a significant offer to pry him away. And the Kings’ ability to remain competitive, it seems, will be a factor in the decision.

Translation: A combination of late first-round draft picks and young   players like the ones wearing green in Boston, it appears, likely wouldn’t  be enough to get it done. The Kings are clearly still pondering the possibility of adding the kind of impact piece that they believe would put them in the playoff mix. Does that mean Barnes won’t get moved? Never say never, but it seems the Kings are holding onto Barnes a little tighter than expected here.

In relation to what Amick is saying about the possible team that could get aggressive in pursuing Barnes, the Boston Celtics surely need more firepower to help make some loud noise in the playoffs. After going deep into the Eastern Conference Finals last year, the Celtics are only sporting a 20-18 win-loss slate this season, which is good enough for the 5th spot in the East standings.

Even with both Jayson Tatum and Jaylen Brown notching All-Star appearances this season, it has become apparent that the Celtics need more depth to take some load off those two young stars. Although Kemba Walker is putting up slightly more efficient games as of late, he is still struggling to get back to his deadly All-Star form due to all the momentum he lost when he missed tons of games this season because of an injury.

Brown and Tatum are both coming up with MVP-worthy performances, but the Celtics’ woes come when either one of these young stars take their rest on the bench. In a separate column written by Amick for The Athletic, he detailed out why acquiring Barnes would perfectly fit into the Celtics’ plans and goals, not just in the present but also for the future.

The Celtics question, then, becomes this: Is Barnes — a 28-year-old        former champion who may be having the best all-around season of his nine-year-career — the kind of difference-maker who could get Boston back among the East elite? Sources say the Kings have (predictably) shifted to “seller” mode in recent weeks after losing 11 of 13 games heading into the All-Star break. And Barnes, in turn, could become a perfectly pragmatic personnel choice for what ails the underperforming Celtics.

Beyond the basketball part of the equation, it seems the timing of it all  may be playing a pivotal part here when it comes to the Celtics’ long-term plan. Barnes, who is making $22.2 million this season, has two subsequent seasons left on his deal and is set to make “just” $18.3 million in the final year (2022-23). Walker, meanwhile, also has a deal  that expires after the 2022-23 campaign (for which he’s owed a whopping $37.6 million).

On top of all these, you can’t forget that the Celtics also packs three Traded Player Exceptions that they got from separate deals they made last offseason. They have a big $28 million TPE from the sign-and-trade deal that sent veteran forward Gordon Hayward to the Charlotte Hornets. They also a got a smaller TPE in dealing veteran big man Enes Kanter to the Portland Trail Blazers, plus another TPE from the deal that sent Vincent Poirier to the Oklahoma City Thunder.

Boston could use these TPEs in acquiring a quality player to add more firepower to their roster. Among the untouchables in the Celtics roster could be Tatum and Brown, and probably their defensive anchor in Marcus Smart. Robert Williams could also be an untouchable in trade talks, unless the deal would also send the Celtics a big man who they can use to body up to the likes of Joel Embiid of the Philadelphia 76ers and Giannis Antetokounmpo of the Milwaukee Bucks.

Will the Warriors move Oubre before traded deadline?

Should the Golden State Warriors try to pry a more proven role player by trading Kelly Oubre Jr? The Warriors acquired Oubre just last offseason in an effort to fill in for the defensive prowess that the injured Klay Thompson left.

Golden State was also hoping that Oubre could bring in a consistent three-point shot, especially considering that he is coming off a career-high 35% clip from beyond the arc for the Phoenix Suns last year. However, Oubre has been struggling in his touch from long range as he is just producing a lowly 31% clip for the Warriors this season.

"I would love to stick around," Oubre told NBC Sports Bay Area's Kerith Burke in an exclusive 1-on-1 interview, which is set to air Monday during "Warriors Pregame Live" at 6:30 p.m. PT. "I'm trying to make a home somewhere, grow in life. And I think [after] getting acclimated more and more here every day, this is a great place to do that. Everything happens for a reason in this life, and I'm here right now. I would love the opportunity to just play, and be comfortable here and continue to grow relationships with people in this organization."

Oubre, who is on his sixth year in the NBA, started his career with the Washington Wizards. He spent three seasons in the nation’s capital before being traded to the Suns in the middle of the 2018-19 season.

It was with the Suns that Oubre became a household name, primarily due to his versatility on the defensive end and the elite athleticism that comes with it. His three-point shooting is still a bit of a weakness, but it’s not like Oubre has an ugly shooting form that cannot be fixed.

However, the Warriors are now on a win-now approach, even with the absence of Thompson. Both Stephen Curry and Draymond Green are now in their 30s, so it’s perfectly understandable why the Warriors would want to go all-in every year. As per Dalton Johnson of NBC Sports Bay Area, general manager Bob Myers reiterated that he is having quite a dilemma in plotting the Warriors’ future.

"I don't think we want to think too short-term and give up something in  the future just to make a little bit of a push now. As hard as that is to stay discipline, I think we would hope that anything that we would  decide to do had legs beyond this year or had advantages beyond the rest of this season. But that's a hard thing to do. When things are presented to you and you think this will help our roster ... again, the discipline comes into play when you factor in yes it will help our roster, but will it help us win a playoff series? Will it help us win a playoff game?

There's regular-season players and there's playoff players. We do need to be better in the regular season. We want to get the highest seed we can. But not to sacrifice a future asset or to be worse in the future. It's a challenge. We want to win, we want to win every game. We want to be good right now and those are the hardest things to do.”

The Warriors have now lost five of their last six games, but they will have a chance to bounce back when they face the Houston Rockets in their next assignment, followed by a mini two-game series against Ja Morant and the Memphis Grizzlies.