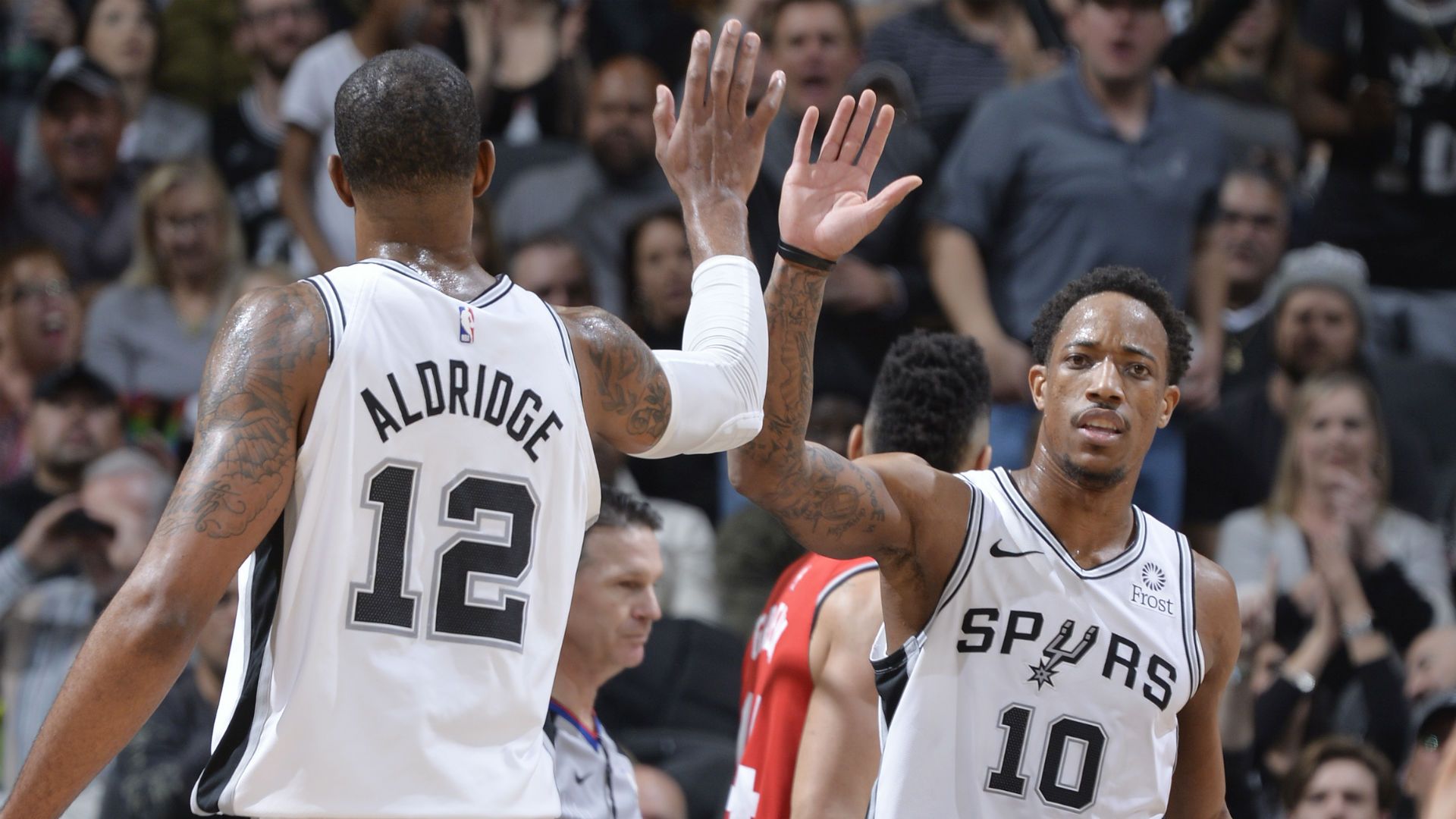 The San Antonio Spurs are in unfamiliar territory after missing the playoffs for the first time in 23 seasons. There are talks about the possible departure of head coach Gregg Popovich. The Spurs could also become very active on the trade front in the offseason, depending on what their direction will be moving forward.

According to Jabari Young of CNBC Sports, the Spurs are unlikely to go into a full rebuild but that does not mean that they will not make any significant move. One of the likeliest move for them is trading All-Star forward LaMarcus Aldridge in order to free up some space or acquire younger assets in the offseason.

Young reported that the Spurs tried to trade Aldridge before the deadline earlier this year but nothing come to fruition. One rival executive said that the Spurs asked for too much in return for Aldridge, expecting a giant package in exchange for the 35-year-old forward. Young believes that the Spurs will likely try to shop Aldridge again in the offseason with the Portland Trail Blazers mentioned as a possible destination.

"The Spurs could shop Aldridge again this offseason," Young said. "Aldridge had repaired his relationship with Blazers superstar Damian Lillard, and one agent suggests the Spurs could ship him back to the Blazers."

Aldridge, the second overall pick in the 2006 NBA Draft, spent the first nine seasons of his career in Portland. The former Texas standout had the best years of his career in a Blazers uniform. Before moving to the Spurs as a free agent in 2015, Aldridge posted a career-high 23.4 points and 10.2 rebounds for Portland.

Michael Scotto of Hoopshype also tagged Aldridge as the star who has the highest chance of getting dealt in the offseason. He said that keeping Aldridge and his expensive contract does not make a lot of sense for San Antonio whether or not they decide to go into a massive rebuild after missing the playoffs this year.

"I think the next star player who will be traded is LaMarcus Aldridge," Scotto told Basketball News. "San Antonio missed the playoffs for the first time since 1997.  Aldridge, 35, could be a missing frontcourt piece for a contender. DeMar DeRozan will likely exercise his $27.7 million player option for next season. If he doesn't, it will hasten a full rebuild in San Antonio. With Aldridge going into the final year of his contract at $24 million, trading him for assets now is the prudent decision if he won't  be a part of San Antonio’s long-term future."

Aldridge averaged 18.9 points on top of 7.4 rebounds and 2.4 assists in 53 games for the Spurs this season. The seven-time NBA All-Star missed the playoffs this season after undergoing shoulder surgery.

Meanwhile, Young also pointed out that the Spurs could also decide to trade DeMar DeRozan or build the team around him. The high-scoring guard could become a free agent in the offseason, but he is expected to exercise his player option, considering the financial uncertainty in the league brought by the pandemic. If the Spurs decide to move him, Young believes that he will be dealt to a rising power in the Eastern Conference.

"The Spurs could build around him, using the team's bubble play as a roster model or trade him, too, should he opt out," Young said of DeRozan's future in San Antonio. "DeRozan is close with Miami Heat star Jimmy Butler, and one agent forecast a possible Spurs-Heat package."

The Heat would benefit a lot from trading for DeRozan, who could provide significant leap for Miami in offense. The 31-year-old guard averaged 22.1 points to go along with 5.6 assists and 5.5 rebounds per game this season. However, it is worth noting that the Heat's alleged primary target is Milwaukee Bucks superstar Giannis Antetokounmpo, and it will all depend on how Miami and Milwaukee's campaign in the playoffs will end.

If the Heat do not express interest in trading for DeRozan, the Spurs are still expected to get a lot of offers elsewhere. Rob Wolkenbrod of Forbes recently suggested a trade between the Spurs and the New York Knicks. In his proposed deal, DeRozan would be headed to the Knicks in exchange for a package involving the eighth overall pick in the draft and young guard Frank Ntilikina. He believes trading DeRozan would be beneficial for the Spurs long term.

"Besides the money implications, the Spurs free up playing time in the heart of their lineup," Wolkenbrod said. "Lonnie Walker and Keldon Johnson stand to benefit the most from a DeRozan trade. Each player is waiting in the wings for more playing time, and their extended tastes near the end of the regular season and into the restart flashed promising signs for San Antonio’s future. Derrick White could take a few more shots, too."

The Phoenix Suns had a great run inside the NBA bubble, winning all of their eight seeding games. The Suns fell short from earning a spot in the play-in round, but their perfect run in Orlando could lead to aggressive moves in the offseason in the hope of seriously contending for a playoff spot in the offseason.

The Suns have the 10th overall pick in the 2020 NBA Draft, which they can use to add another promising prospect. But if they are thinking about making the playoffs, Jeremy Cluff of Arizona Republic said that trading the pick along with Kelly Oubre Jr. makes a lot of sense for Phoenix.

"It didn't take long after the Phoenix Suns landed the No. 10 pick in the 2020 NBA draft lottery for talk to turn to the possibility of the team trading the pick," Cluff said. "Some of the talk revolved around the team potentially packaging the pick with Kelly Oubre Jr. in an attempt to free up some money in free agency or facilitate a trade for a player who might help the team continue to progress and potentially contend for the NBA playoffs next season."

The Suns could look for another scoring option to lessen the pressure on All-Star guard Devin Booker's shoulders. Ryan Bawek of Valley of the Suns said that Phoenix should consider packaging the pick and Oubre in a trade from Brooklyn Nets guard Spencer Dinwiddie. He believes that adding Dinwiddie would give the Suns the much needed offensive punch that will likely put them in a position to contend for a playoff spot again next season.

"Dinwiddie is a perfect fit for the Suns and he and Prince would make the Suns even deeper with even more positional versatility what many of the league’s greatest rosters are built on moving into the 2020-21 season," Bawek said. "He would instantly be the best sixth man in the NBA, provide the Suns with that third scoring option, and solve the Suns’ backup point issue."

Dinwiddie had the best year of his career this season, as he averaged career-highs 20.6 points and 6.8 assists this season. However, his usage rate in Brooklyn will likely go down next season because they are expected to have a healthy Kevin Durant and Kyrie Irving in the roster. Caris LeVert also turned heads in the bubble, making him the ideal third star for the Nets in the years to come.

Washington Wizards superstar Bradley Beal continues to be mentioned in numerous trade chatters. Beal has been linked to several teams, including the Golden State Warriors, Miami Heat, and the Los Angeles Lakers. However, the Wizards remain mum about their plan on Beal after their disappointing stint in the NBA bubble.

But according to Chris Broussard of Fox Sports, the Wizards should show mercy to Beal by moving him to a contender in the offseason. Broussard said that Beal's talent is being wasted in Washington, who has missed the playoffs for the second consecutive season.

"Of course, everyone seems to think that Bradley Beal will be the next star player who gets traded," Broussard said in a Basketball News roundtable discussion. "For his sake, I hope so. He’s too good to waste his career losing big in Washington."

NBA insider Alex Kennedy also agreed that Beal will likely get traded, but he thinks it will not happen too soon. Kennedy believes that the Wizards would analyze the situation after several games next season. If they fail to start the season on a high note, he is expecting that the Wizards would try to get younger assets in exchange for Beal.

"It’s possible that Washington will keep Beal and hope that John Wall’s return could lead to a playoff berth next year," Kennedy said. "However, many teams will be calling about Beal and Washington may decide to deal him for more young players and draft picks, especially if they get off to a slow start in 2020-21."

Beal's trade value is on all-time high after having the best season of his career so far. The 27-year-old guard posted career-highs 30.5 points, 6.1 assists, and 3.0 three-pointers per game. The former Florida standout has three seasons left in his contract with the Wizards.