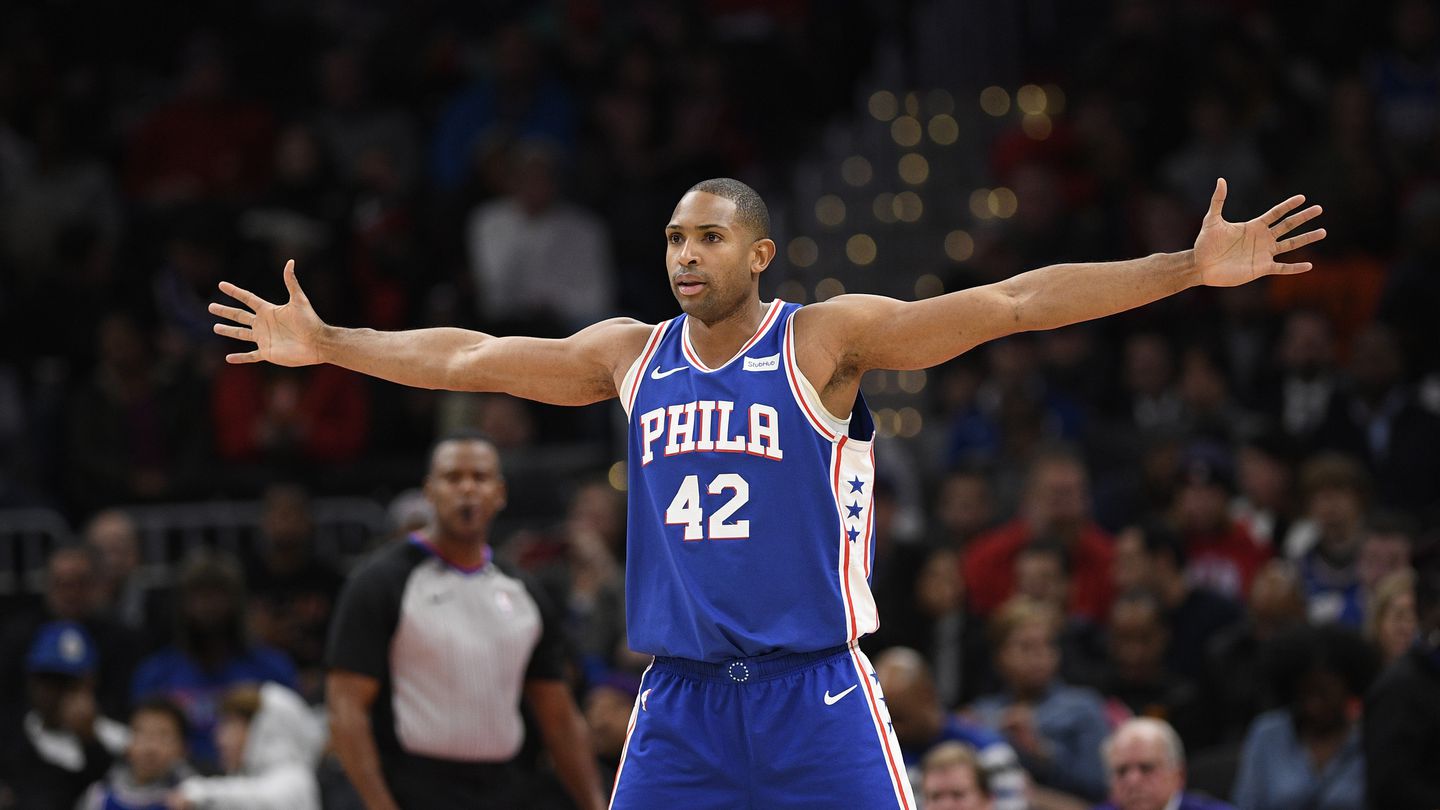 NBA Trade Buzz: Should The Sixers Give Up On The Horford Experiment?

Horford could be on the trading block this summer

When they successfully lured the versatile big man Al Horford out of their rival team Boston Celtics last summer, the Philadelphia 76ers envisioned more team success this season. Although the 34-year old Horford is not getting any younger, the Sixers front office obviously thought that he could come in as a veteran glue guy whose caliber is that of a borderline All-Star. The 6-foot-9 has always been an anchor on the defensive end, and his playmaking on the Celtics’ offensive sets was definitely phenomenal for his position.

Yet, Sixers head coach Brett Brown and his coaching staff decided to relegate the vet to the second unit in the second half of the season. Except for his rookie year during the 2007-08 season, Horford has never come off the bench until now. While it could say something about the dip in his performance due to his age, it could also indicate that his frontcourt partnership with Sixers superstar Joel Embiid is not working as well as how the Sixers wanted it to be.

With that said, USA TODAY’s Jeff Zillgitt recently reported that we could see Horford’s name on the trading block this summer. That is not shocking at all, especially with the team demoting Horford to a sixth man role.

“Short of a deep and surprising run in the playoffs, where do the Sixers go from here? Though the Sixers did not try to move Horford at the trade deadline, that might be a possibility in the off-season – if they can send that contract to another team and get shooting in return - a person with knowledge of the situation told USA TODAY  Sports. The person requested anonymity because he was not authorized to speak about Philadelphia's plans.”

Last offseason, the Sixers signed the veteran to a lucrative four-year, $109 million deal. Of course, Horford does more things than what is indicated in the stat sheet. His leadership is valuable, and his experience in the big stage is definitely not something one can easily buy. But he will already be 36 years old by the time his contract enters its last year, and he will be earning $26 million in that year alone.

Even before the February trade deadline passed, there were already speculations that the Sixers front office might look into the trade market and see what it offers for an aging yet tested and proven veteran like Horford. But they stood pat on Horford, and traded for role players instead.

Amidst all these uncertainties in personnel movement, one thing is for sure: the team needs to build up their chemistry before it is too late. During the Sixers’ recent four-game slump that featured losses to perennial Eastern Conference contenders, Horford sounded off on the team’s dire need to finally come together and double down on their effort, as per Noah Levick of NBC Sports Philadelphia.

“There’s some stuff going on in our locker room and we’ll keep that internal. We all  know we need to be better. We need to step it up, and it’s a great opportunity to do it tomorrow.

We weren’t focused enough, especially on the road. We were focused in the first half [against the Heat], then in the second they made a little run and for some reason we weren’t able to recover. As a group we need to be more focused. We did a little better on the road, but we’ve fallen back to a bad pattern. Tomorrow we’re going into a place that’s tough and our backs are against the wall, so we need to really be great tomorrow.”

While logging in 30.6 minutes per contest, Horford is giving the Sixers a decent stat line of 11.7 points, 6.7 rebounds and 4.0 assists. The downside of his performance this season is that he is shooting a 33% clip from the three-point line, and his efficiency on the defensive end is not as excellent as it used to be when he anchored Boston’s defense in the past couple of years.

But then again, not many people believed that this will work out very smoothly for the Sixers. In today’s small-ball era, two bigs on the frontcourt would spell a lot of difficulties especially on the defensive end of the floor. Of course, one could argue that the traditional frontcourt set-up has been working out well for the Los Angeles Lakers. But that is because unlike Horford, Anthony Davis is still at the prime of his career and at the peak of his mobility and athleticism. On top of that, JaVale McGee and Dwight Howard are more capable of switching to multiple positions and protecting the rim than Embiid. We’re not saying that Embiid is a bad defensive player, but his battle with numerous injuries has cost him some of his mobility on defense.

More than that, the Sixers have to learn to come together as one squad. They have a horrendous 9-22 record away from home this season, an indication that they are yet to build a solid cornerstone as a team. If this trend continues, a first round exit in the playoffs is not hard to picture out. And if that indeed happens, we might see a lot of changes within the roster and even within the coaching staff next season.

When asked about the team’s mighty struggle to rack up wins on the road, a confused Brown pointed out to his players’ need for more mental toughness, as per Joe Vardon of The Athletic.

“You’ve got this at home and this on the road, it’s two different personalities. If I just went to the road and said, ‘Why is it? Have we had bad shootarounds? Have we had bad practices? Is like the spirit of the group that polluted that we can’t navigate through stuff?’ And it isn’t. Like, I can’t, and I’ve been doing this long enough to live in the real world, I can’t point to any of that as being ‘uh oh.’ There’s some fragilities for sure, all teams go through, and so it is still a little bit of a mystery, even to me as the coach. Why? I’ll always point to defense, I’ll always point to like mental toughness on the road type stuff. And this is all true.”

More than the mental toughness and composure needed to win close-call games on the road, it could also help if the team plays more games when they are fully healthy. As of now, both their two All-Stars in Embiid and Ben Simmons are on the injury list. Simmons will be out for at least two more weeks as he is recovering from a lower back injury, while Embiid just recently injured his shoulder. It was certainly a bummer for the Cameroonian big man as he is just coming off a career-best 49-point outing during a win against the Atlanta Hawks. Embiid is just finding his groove in his offense, but this setback could be another hurdle that will take time to overcome.

As Philly’s campaign enters its most important stretch with an eye towards the postseason, the only positive takeaway from the injuries to their two stars is that it will give the other players the golden opportunity to find their momentum and step up to the plate. Former G-League standout Shake Milton just torched the nets against the Los Angeles Clippers, pouring in a career-high 39 markers, including a stellar 7-9 clip from beyond the arc. With the likes of Milton, Tobias Harris, Josh Richardson, recently-acquired Alec Burks and even a rookie in Matisse Thybulle, the Sixers have the depth to be called an elite contender in the East.

Horford definitely knows this as he still believes that he and his teammates just need to pause, re-assess their performance and improve on their weaknesses.

“I think we all look at ourselves in the mirror and we see how we can be better. But ultimately as players, we need to be better.

I believe so. But ultimately [general manager Elton Brand] has some important decisions to make. I believe with this group we can get it together, of course.”

With a 37-24 win-loss slate, the Sixers are sitting on the fifth seed in the standings and are 1.5 games behind the Miami Heat for an outright home court advantage in the first round of the playoffs. They are just coming off a six-point loss at the hands of the Clippers, and will close out their current road trip with match-ups against the Lakers, the Sacramento Kings and the Golden State Warriors. It is a sure thing that Embiid and Simmons will be sidelined for the rest of the trip, so the Sixers will be relying on the leadership of Horford and the scoring of Harris and Richardson to tow them to victories.