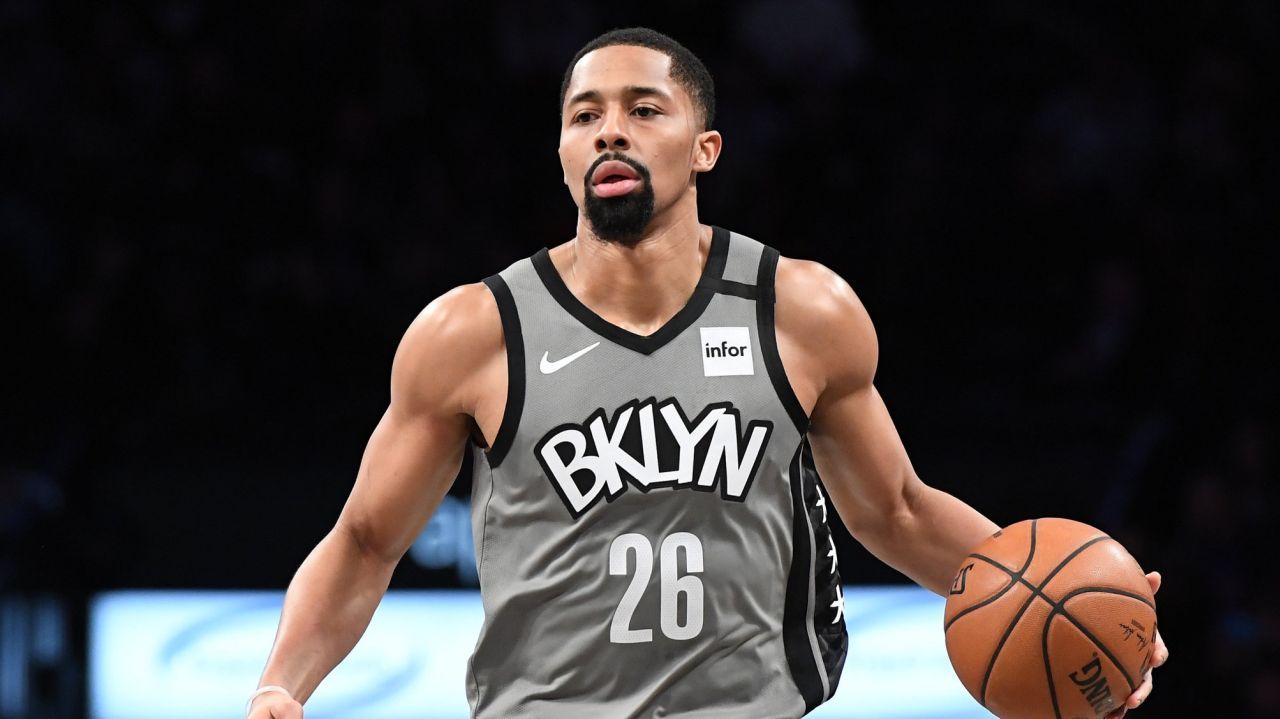 The Los Angeles Clippers will be a new-look team heading into the upcoming season after making roster and coaching staff changes this offseason. Former head coach Doc Rivers was fired and was replaced by Tyronn Lue. The Clippers also lost Montrezl Harrell and JaMychal Green but added Serge Ibaka, Luke Kennard, and Nicolas Batum. However, most executives are convinced that the Clippers are not done yet.

The Clippers are continuously being mentioned in numerous trade rumors less than three weeks before the 2020-21 NBA season begins. Clippers superstar Kawhi Leonard reportedly wants his team to add a new starting point guard, which might be their focus in the upcoming days or until the trade deadline. If the Clippers are determined to add a playmaker, Mo Dakhil of Bleacher Report thinks they should reach out to the Brooklyn Nets.

Dakhil believes that the Clippers should try to trade for Spencer Dinwiddie, whose name has floated around in numerous trade chatters this offseason. He said that while Dinwiddie needs the ball in his hands most of the time to become effective, the 27-year-old could be what the doctors ordered for the Clippers based on his assist numbers last season. With Dinwiddie on the roster, the burden on Leonard's shoulder is expected to be lessened.

"Dinwiddie's 6.8 assists per game would have led the Clippers this past season, and he is capable of taking on the role of playmaker for LA," Dakhil said. "The Clippers lose a bit of shooting and defense in the trade, but freeing Leonard up from the responsibility of being a primary playmaker could open more doors."

In the proposed deal, the Clippers will acquire Dinwiddie in exchange for Patrick Beverley. The deal would also make sense for the Nets, who are expected to have superstars Kevin Durant and Kyrie Irving healthy in the upcoming season. First, Dinwiddie could walk away and leave them with nothing after next season. Second, Beverley could provide the defensive punch the Nets need from their backcourt.

"For the Nets, Beverley would help shore up their defense on the perimeter while giving them a better floor-spacer on offense. Beverley was a 38.8 percent three-point shooter this past year and is at 38.1 percent for his career," Dakhil said of the Nets getting the defensive-minded guard. "Plus, having him with one more year left on his deal gives the Nets a little time to evaluate his fit."

Beverley averaged just 7.9 points on top of 5.2 rebounds and 3.6 assists per game for the Clippers last season, but his impact goes beyond statistics, as he is a pest on the defensive end of the floor. On the other hand, Dinwiddie is coming off the best season of his career, as he posted a career-high 20.6 points to go along with 6.8 assists and 3.5 rebounds in 64 games for the Nets last season.

If the Nets decide to keep Dinwiddie, Dakhil said that Victor Oladipo is another compelling option for the Clippers. Oladipo has been saying publicly that he wants to remain with the Indiana Pacers, but his team might decide to trade him instead of losing him for nothing in free agency next year. The two-time NBA All-Star, who has also been a mainstay in trade rumors this offseason, will be playing in the final year of his contract with the Pacers.

Dakhil thinks that the Clippers could get Oladipo in exchange for Beverley and Lou Williams. While Oladipo is a star in Indiana, his value is currently low after failing to find his rhythm last season following his recovery from a ruptured quadriceps tendon. Dakhil believes that the 28-year-old guard could be the final piece to the Clippers' puzzle in their title pursuit next season.

"Oladipo's days as a leading man may be over, but with a team like the Clippers, he could be their missing piece," Dakhil said of Oladipo, who averaged 14.5 points to go along with 3.9 rebounds and 2.9 assists in 19 games last season. "He can bring the ball up and get the team into its offensive sets, and he would make it easier for Lue to always have two of his three top scorers on the court without losing much playmaking."

Greg Swartz of Bleacher Report also has a trade idea for the Clippers. In his proposed trade, the Clippers would get New Orleans Pelicans guard Eric Bledsoe in exchange for Beverley, Terrance Mann, and a 2020 second-round pick. Bledsoe was recently dealt to the Pelicans as part of the Jrue Holiday trade. The veteran point guard might be expendable because the Pelicans have a crowded backcourt led by Lonzo Ball.

Bledsoe, who averaged 14.9 points to go along with 5.4 assists and 4.6 rebounds per game last season, is not a pure playmaker, but Swartz believes that he would be an upgrade over Beverley. The 30-year-old guard can also hold his own on the defensive end of the floor. Bledsoe will also not be a stranger to the bright lights in Los Angeles, having played his first three seasons in the NBA with the Clippers.

But more than the need for a new playmaker, there are questions surrounding the team's chemistry. The Clippers suffered a monumental collapse last season, blowing a 3-1 lead over the Denver Nuggets in the second round of the playoffs. According to Andrew Greif of Los Angeles Times, one of the biggest questions facing the Clippers heading into training camp is their poor team chemistry and lack of leadership from Leonard and Paul George.

"Some of last season’s returning players were frustrated seeing the leeway the team afforded to Leonard and George to accommodate the offseason additions, and the teammates’ lack of time together on the court was also a major factor in what players described as poor chemistry," Greif said. "The tweaked roster has not undergone wholesale changes this offseason, but it’s too much to expect Kennard and recently acquired big man Serge Ibaka to immediately step into a vocal leadership role."

The Clippers were tagged as heavy favorites to win it all last season after acquiring Leonard and George in free agency and a blockbuster trade, respectively. Los Angeles looked on their way to a showdown with the Los Angeles Lakers in the Western Conference Finals after building a 3-1 lead over the Nuggets in the second round of the playoffs, but they failed to close out the series, losing three consecutive games to Denver.

The Los Angeles Lakers were the first to make a big move in the offseason when they struck a trade to acquire Dennis Schroder from the Oklahoma City Thunder in exchange for Danny Green and a first-round pick. After the trade was consummated, most experts said it was a massive coup for the Lakers because they acquired a player who can shoulder a lot of playmaking and scoring responsibilities while LeBron James is not on the floor.

Schroder excelled in an off-the-bench role in Oklahoma City last season. In fact, he finished second in the 2020 NBA Sixth Man of the Year race last season after averaging 18.9 points on 46.9 percent shooting from the field to go along with 4.0 assists and 3.6 rebounds per game. However, the 27-year-old guard said that he wants to start at point guard for the Lakers next season, believing that he can do great things with James and Anthony Davis.

"I did this off the bench stuff already in two years with OKC," Schroder said during a video conference from their practice facility via Los Angeles Times. "I think I try to move forward, and I think with AD and LeBron, I can be helpful as a starter in the [point guard] position."

The Lakers had a lot of success when James is running the show for them. However, the four-time NBA champion is not getting any younger, and the Lakers want to keep him fresh for their playoff run. With him starting at point guard, Schroder thinks that he can take a lot of James's burden, similar to what veteran point guard Rajon Rondo did during their championship run last season.

"I can bring it up, call a set play or whatever, and put him in a position to score,"Schroder said of playing with James, who will be turning 36 later this month. "I think him to play off-the-court, off-the-ball, I mean, is I think great. I think that’s the reason why they brought me in."

His role next season might also define his future in Los Angeles. Schroder will be playing in the final season of his four-year, $70 million contract. If he gets unhappy in Los Angeles, the German point guard could leave the Lakers and sign elsewhere next year. However, Schroder said that he is not thinking ahead, as he is focused on the upcoming task at hand, which is to help the Lakers defend their title in the upcoming season.