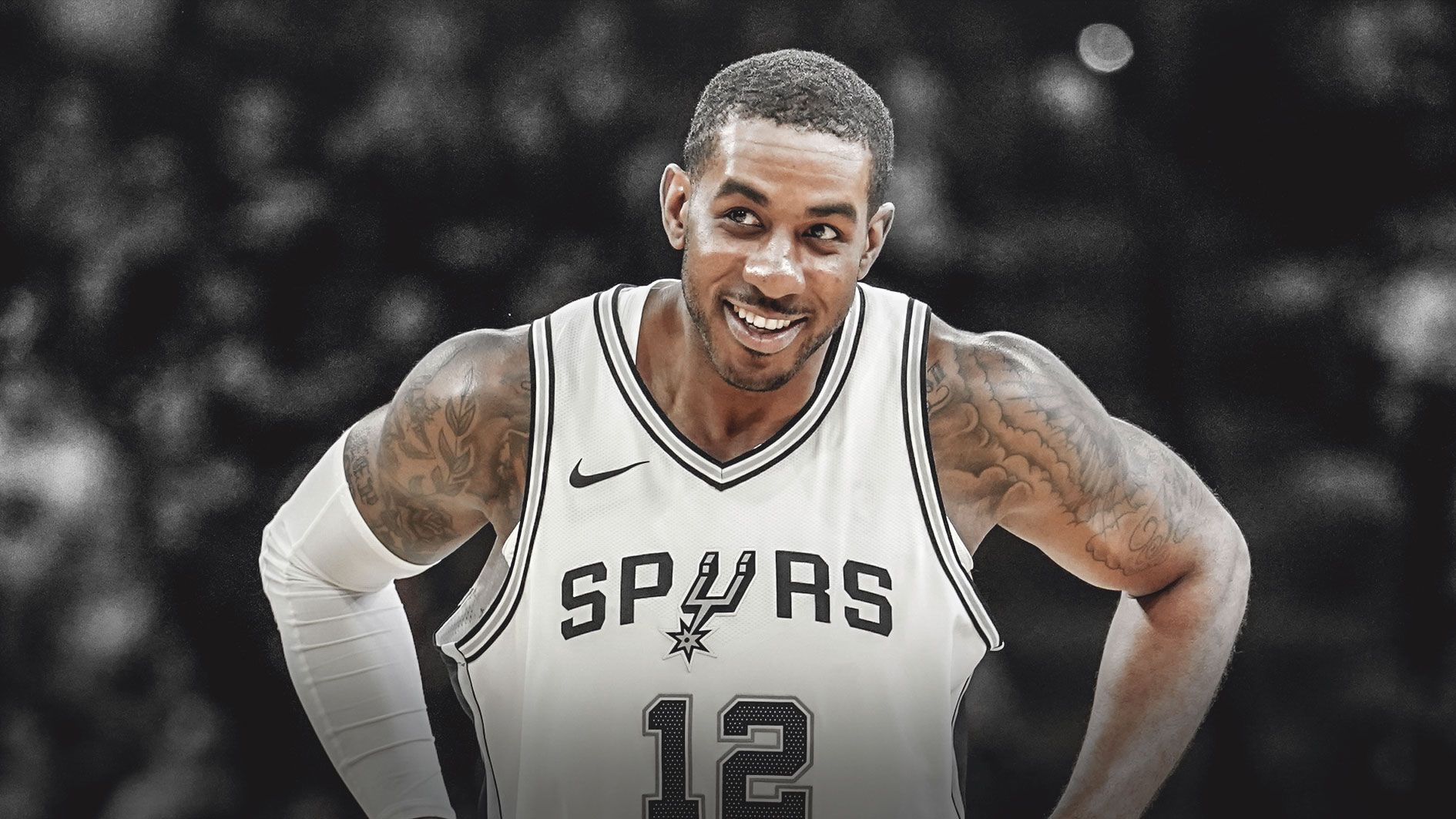 Will the struggling Spurs ship Aldridge?

The San Antonio Spurs recently ended their disappointing eight-game losing skid when they beat the New York Knicks. However, there’s little optimism for this squad to be a true playoff contender, and they may not even make the playoffs at all. There are speculations swirling that the Spurs might have to trade its two stars in DeMar DeRozan and LaMarcus Aldridge. Sean Deveney of heavy.com recently reported that the Boston Celtics are interested in the services of the 34-year old Aldridge.

“Aldridge makes some sense, but he is 34 and has slowed a bit. The Celtics almost certainly would need to trade Gordon Hayward and take back some salary to make an Aldridge deal work and they’d be reluctant to do that.”

Aldridge is set to earn $26 million this season and $24 million next year before he enters unrestricted free agency in 2021. He is coming off another All-Star season last year, the seventh of his productive career. But Aldridge has seen a dip in his production this season. His points and rebounds average both decreased by at least 3 points. Although his shooting efficiency is still decent, many are wondering if this might be the right time for the Spurs to let go of their aging stars and fast track the development of their younger players.

Furthermore, Aldridge has always hinted at going back to Portland and play for the Trail Blazers again. Aldridge spent his best years there before he signed with the Spurs in 2015. In a column written by Jason Quick of The Athletic, Aldridge talked about his relationship with Blazers star Damian Lillard and his intentions of finishing his career in the city where he started his NBA career.

“You never know. But of course, if we had a better relationship, it changes the whole outlook of how it went. It’s sad that not talking like we do now could have changed history. But everything happens for a reason. He has flourished in that role, and I keep telling him I’m going to come back and finish there. That’s something him and I have talked about — playing together again.”

Since Aldridge will become a free agent in a couple of years, there are plenty of reasons to believe that Portland will be his most probable destination. He will be 36 years old by then and he could serve as a veteran mentor for the squad.

Going back to the Spurs, it remains to be seen if they are willing to enter a rebuild and arguably give up contending for a playoff spot. Except for Gregg Popovich’s first head coaching year with the team in 1996, the Spurs have been in the playoffs since. Yet, Coach Pop has floated a hint that he could be soon retiring from the NBA. As per Tom Osborn of the San Antonio Express-News, Popovich made this statement about retiring “pretty soon.”

“It’s always different coming onto a court when the star (Dirk) that was basically the backbone of the franchise is gone. It sort of gives you pause and makes you understand how fortunate you are to still be there, I guess. Pretty soon I won’t be.”

Popovich is already 70 years old and it might be better for him to walk away from the daily grind of the NBA and focus on his head coaching job in Team USA. If this is true and the organization knows that their long-tenured tactician will announce his retirement soon, then a mid-season trade involving Aldridge and DeRozan should also be next in line.

George and Leonard wanted to play together at San Antonio

Speaking of the Spurs, you all remember how Kawhi Leonard broke out of his shell and win the Finals MVP trophy while leading San Antonio to a championship in 2014. Well, we also know how his relationship with the Spurs organization soured ever since, leading him to demanding a trade out of the team. He was then moved to Toronto in 2018, a great risk that Masai Ujiri and the Raptors front office took to claim that elite status and truly contend for the title. They all knew that Kawhi would want to go back home to Los Angeles after that season. Winning worked out well for them as the Raptors shocked the basketball world and won the 2019 NBA Finals. However, Kawhi did the expected and signed with the Clippers. He joined forces with the recently-traded Paul George, another superstar who hails from LA.

But what if we turned back the clock and imagine the possibility of George playing with Kawhi on the Spurs instead? ESPN’s Ohm Youngmisuk reported that George actually wanted to be moved to San Antonio for the chance to play with Leonard and play under the brilliant Spurs head coach Gregg Popovich.

A league source confirmed that the Pacers and Spurs talked, but San Antonio lacked the assets to pair George with Leonard. The Lakers also wanted George, but then team-president Magic Johnson would not trade the 2017 second overall pick (which would become Lonzo Ball) and Brandon Ingram, believing the team could eventually sign George as a free agent.

But the Spurs trade didn’t happen, and George found himself being shipped to the Oklahoma City Thunder. He teamed up with Russell Westbrook for two years, but two consecutive disappointing first-round playoff exits forced both stars to move on from Oklahoma City. Westbrook is now with the Houston Rockets, while the Clippers traded for George so that they could grant Kawhi’s condition in which he will only sign with the team if they have PG13 on the roster.

It’s a great what-if if you’re a San Antonio fan, considering how the Spurs are struggling to rack up wins this season. On the other hand, George and Leonard got what they always wanted. Now, they have joined forces in their hometown with the mission of helping the Clippers strike off the “LA’s other team” tag and give the franchise their first championship.

Should Hornets make a trade for Pistons All-Star center?

When long-tenured star point guard Kemba Walker signed with the Boston Celtics in free agency this summer, many people expected the Charlotte Hornets to be a bottom-dwelling team in the East. Add to that the fact that their biggest offseason acquisition was Terry Rozier, a good young combo guard yet still a bit inexperienced for a main man role with his new team. But the Hornets are showing their collective potential this season. Despite a 6-12 record to start the year, they have been competitive even in their close-call defeats.

With that said, is there a possibility for the Hornets to fast track their rebuilding process and make a mid-season move for an All-Star caliber player to reinforce them? Heavy.com’s Sean Deveney recently reported that a league executive told him that the Hornets front office has always targeted Detroit Pistons star big man Andre Drummond.

“He’ll be a priority there. It’s just a matter of whether they make him a priority now and give up something to get him or try to make the move later. It’s a very cautious group, Mitch Kupchak and those guys. But they might want to get this guy into the fold sooner rather than later, there’s just a lot of incentive there on both sides.”

Drummond, who is set to become the top prize of the shallow 2020 free agency class, is posting double-double average of 17.8 points, 16.8 rebounds, 2.9 assists, 1.6 steals and 1.8 blocks. The 26-year old center is averaging career-highs in points and rebounds, a great indicator that the two-time All-Star is still improving his skill set.

But despite of his individual brilliance, the Pistons are just sporting a 6-11 win-loss card. His partnership with frontcourt star Blake Griffin is obviously not working, so there is a high possibility that either star will be traded at some point this year. Of course, the Pistons can still re-sign Drummond next summer but it’s also a great back-up plan to trade him in case he walks out in free agency, leaving the Pistons empty-handed.