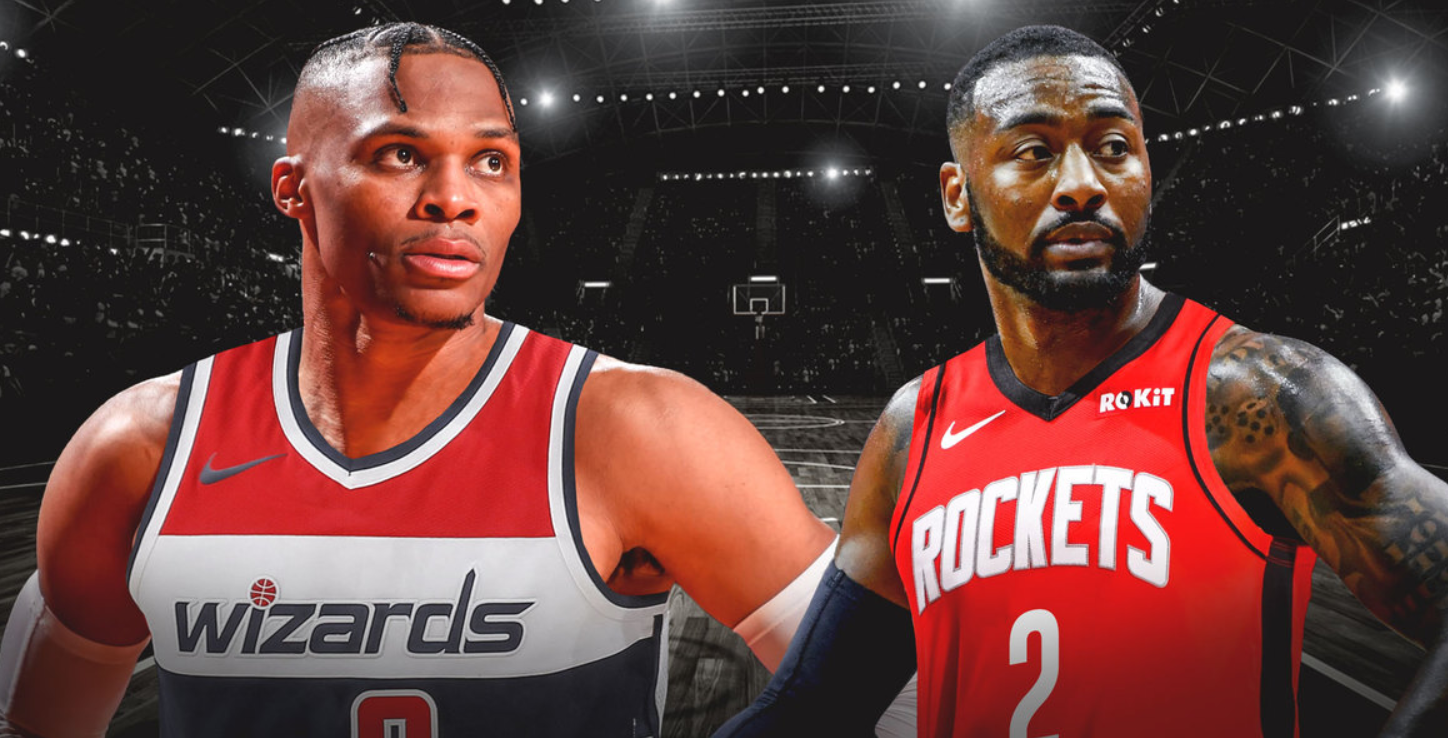 The Houston Rockets and the Washington Wizards have been mentioned numerous times in trade rumors this offseason. The Rockets were in a tough situation after Russell Westbrook demanded a trade out of Houston, while the Wizards were reportedly considering trading John Wall. Trading Wall and Westbrook is easier said than done because of their expensive contracts, but Houston and Washington found a trade partner in each other.

The Rockets agreed to send Westbrook, who is coming off just his first season in Houston after the blockbuster trade from the Oklahoma City Thunder, to the Wizards. In return, Houston got Wall along with a first-round pick, per Adrian Wojnarowski of ESPN. The pick involved in the blockbuster trade is reportedly a lottery-protected 2023 first-round pick. If the Rockets will not get it in 2023, it will be top 12 protected in 2024, top 10 protected in 2025, and top 8 protected in 2026. If the pick is not conveyed by 2026, it will become second-round picks in 2026 and 2027.

According to Wojnarowski, Wizards general manager Tommy Sheppard and Rockets new general manager Rafael Stone previously talked about the Westbrook-Wall trade back in November but failed to reach an agreement. Talks did not push through until they decided to link up again on Tuesday, and the negotiation was easier, as reports indicated that the two sides agreed to the swap within hours.

The two general managers reportedly want to convince Rockets guard James Harden and Wizards guard Bradley Beal to commit to their respective teams, which is why they decided to pull the trigger on the deal. Harden has reportedly expressed his desire to be traded as well, while Beal has been mentioned in numerous trade chatters, with most of it linking him to teams where he can have a chance to win a title.

The Rockets are planning to keep Harden, knowing that there is no pressure to trade him at this point because the former NBA Most Valuable Player is still in contract at least in the next two seasons. Harden owns a player option before the 2022-23 NBA season. The reigning and three-time scoring champion reportedly wants to join Kevin Durant and Kyrie Irving in Brooklyn.

It remains to be seen whether or not the trade for Wall would change his stance about getting dealt out of Houston, where he has played in the past eight seasons. There are questions surrounding Wall because he has not played since December 2018 after dealing with knee issues and a torn Achilles tendon. The 30-year-old guard, who still has three years left in his contract, averaged 20.7 points and 8.7 assists in 2018.

On the other hand, Westbrook will be reunited with Wizards coach Scott Brooks, who once coached the explosive guard back in their days with the Oklahoma City Thunder. Westbrook wanted to be traded to a team where he can be utilized similar to how he was used in Oklahoma City. Playing under Brooks who surely knows how to deal with him is a big plus for the explosive point guard.

Who Won the Westbrook-Wall Trade?

The Rockets and the Wizards both decided that moving on from their respective stars could work well for their respective teams. The Wizards wanted to see if the Wall-Beal tandem could still lead them to winning seasons, but there is great concern about Wall's injury. The Rockets, on the other hand, also wanted to keep the Harden-Westbrook combo, but the latter is reportedly firm on his trade request.

According to David Aldridge of The Athletic, there are obvious flaws in Westbrook's game, which were magnified during his playoff stint with the Rockets. Aldridge added that there are red flags when it comes to Westbrook's efficiency, but he thinks the trade makes sense for the Wizards because the nine-time All-Star would bring extra toughness and competitiveness in Washington.

"In an era that craves efficient basketball, Westbrook often isn’t efficient. And he can be a handful for a team to deal with," Aldridge said. "But he wouldn’t have been available if he was perfect. What Russell Westbrook does do, night in and out, is compete his ass off. He sets a tone, a relentless one, in trying to win games. Ask yourself, if you’re a Wizards fan, if you could say that about the Wall-Beal Wizards the last few years."

Sheppard said that trading Wall was not an easy decision because of his contribution not only to the team but also to the community. However, the Wizards GM said that acquiring a player like Westbrook was too hard to pass up. Coach Brooks echoed Sheppard's statement, saying it was hard to let go of Wall, but he also expressed excitement about his reunion with Westbrook in the nation's capital.

"Russell’s accomplishments and honors on the court speak for themselves, but his   drive and will to win are what separate him as a truly unique player," Brooks said. "As much as I’m looking forward to reuniting with him, I’m equally sad to say good- bye to John. He is one of the toughest and most gifted players I’ve ever been around and we all wish him nothing but the best moving forward."

On the other hand, the Rockets will not have to make a lot of adjustments in terms of fitting Wall with Harden. According to Kelly Iko of The Athletic, Wall's fit with Harden is almost similar to Westbrook's because of their struggles to shoot from the distance. However, Iko said that the Wall-Harden pairing has a chance to work if both of them would be willing to make sacrifices regardless of Wall's physical status coming off a long layoff.

"For this new pairing to work, Harden will have to be more of a willing off-ball  threat," Iko said. "Wall will take some time to get his body back up to speed and pace of NBA games, but Harden should make his job easier by doing some of the things he wasn’t always willing to do with Westbrook or Paul. This involves becoming more of a screener, cutter, and all-around threat."

Iko added that Harden was likely consulted before the Rockets finalized the agreement with the Wizards. However, he pointed out that only time will tell if adding Wall to the roster would make him commit his long-term future in Houston instead of pushing for his trade request.

Utah Jazz center Rudy Gobert will be playing in the final year of his contract with the Jazz. The towering center has been mentioned in recent trade chatters because the Jazz might eventually find the need to trade him instead of losing him for nothing when he becomes a free agent after the upcoming season. But if he is to decide, Gobert wants to continue playing for the Jazz.

The Jazz could offer a supermax extension to Gobert, which the former NBA Defensive Player of the Year has to accept before December 21. If no extension is reached before the season kicks off, he could still sign a four-year, $133 million extension during the regular season.

However, if the two parties cannot reach a deal, Gobert will enter free agency and get a chance to sign elsewhere. Despite his current contract situation, the 28-year-old center said that he is committed to helping the team reach their goal in the upcoming season and he will let his agents handle his deal with the franchise.

"My approach is still the same," Gobert said. "My goal is to win a championship here. It’s been my goal since I got here and it’s still the same. I’m focused on the upcoming season, and I’m excited. And about the negotiation talk, that’s why I have an agent, so I can focus on basketball and I let him take care of that."

The Jazz have shown loyalty to their key players this offseason. Utah signed Donovan Mitchell to a five-year extension that could pay the high-scoring guard up to $195 million during the duration of the contract. The Jazz also kept Jordan Clarkson, a key contributor off the bench last season, signing him to a four-year, $52 million contract. Tony Jones of The Athletic said that Utah needs to sign Gobert to an extension as well.

"The Jazz and Gobert need each other," Jones said. "Utah’s defense and its offense center on Gobert’s talents, his ability to make an impact on the lane on both ends of  the floor and his capacity to do so many things that don’t show up in the box score that it allows guard Donovan Mitchell the room to do his thing. Gobert isn’t looked at as a superstar in the traditional sense. But in Utah’s system, he’s emerged as one of the best players in the league."

Gobert, a two-time NBA Defensive Player of the Year, is coming off another strong season for the Jazz. In 68 games last season, the French center averaged 15.1 points and a career-high 13.5 rebounds to go along with 2.0 blocks and 1.5 blocks per game, which were enough for him to earn his first All-Star appearance.