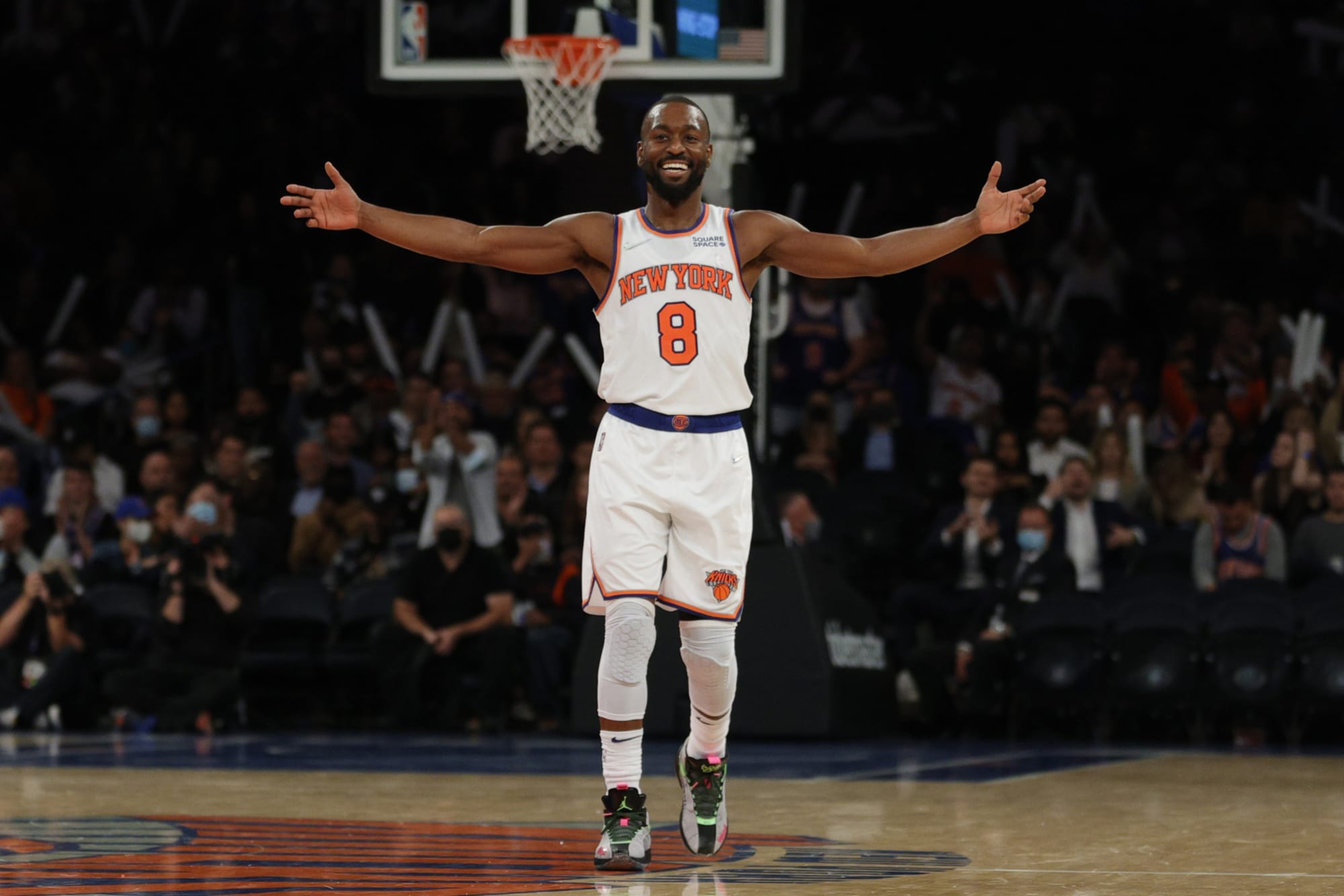 Walker-Knicks partnership may come to a quick end

When the New York Knicks brought in Kemba Walker to the team last offseason, it is with a plan to give him a starting role and let him be the squad’s primary shot creator in the backcourt. However, it has become apparent that the Knicks coaching staff are removing Kemba from the rotation, especially with him going through a lot of struggles in the past few games. As per a column written by Tim Bontemps of the ESPN, Knicks head coach Tom Thibodeau told the media that while this is a very difficult decision to make, it is true that he is removing Kemba from the rotation, starting with the upcoming game against Kevin Durant, James Harden, LaMarcus Aldridge and the Brooklyn Nets on Tuesday.

Kemba has played in 18 games this season, and has started in all of them. He is logging an average of 24.5 minutes per game, which is the lowest playing time he is seeing throughout the entirety of his career. Kemba is also putting up a stat line filled of career-low numbers of 11.7 points, 2.6 rebounds, 3.1 assists, and 1.1 steals, including a set of shooting percentages that consist of a 41% overall clip from the field, a 41% clip from the three-point line, and an 80% clip from the free throw line.

However, the problem is that Kemba is struggling with his shooting, and his playmaking is not helping him out there. In four of his last five games, the veteran point guard only scored in single digits and has struggled to get into his rhythm. Moreover, Thibodeau also mentioned that he wants to have more length on the defensive end of the floor, which further dampens Kemba’s playing time. On top of all these, Bontemps also pointed out that the Knicks’ original starting lineup that included Kemba, veteran shooting guard Evan Fournier, young and talented wing RJ Barrett, All-Star power forward Julius Randle, and young defensive big man Mitchell Robinson is not working at all.

Walker, 31, is averaging career lows across the board, including points (11.1),  rebounds (2.6), assists (3.1), field goal attempts per game (9.8) and minutes (24.5). After a hot start to the season, his numbers have tailed off dramatically, as he averaged 10 points on 39% shooting overall -- and 29% from 3-point range --through 12 games in November. Meanwhile, New York's starting lineup has simply   not worked. Entering Monday night's action, the team's typical starting lineup -- Walker, Evan Fournier, RJ Barrett, Julius Randle and Mitchell Robinson -- is the NBA's most-used five-man lineup, logging 287 minutes. It has also been outscored by 15.6 points per 100 possessions in those minutes, and has what would be the NBA's worst defensive rating (118.9). Individually, the Knicks are being outscored when Walker is on the court by 13 points per 100 possessions, and are outscoring teams by 11 points per 100 possessions when he isn't.

Walker spent the past two seasons in Boston after the Celtics signed him to a four-year max contract in 2019 to replace Kyrie Irving once the latter left to sign his own max deal with the Nets. After making the All-Star team his first season and helping Boston reach the Eastern Conference finals with strong play in series victories over the Philadelphia 76ers and Toronto Raptors along the way, Walker struggled with knee issues last season, missing 29 games in the regular season and the final two games of Boston's five-game loss to Brooklyn in the first round.

Walker, who will turn 32 years of age in May of next year, is currently on his first year with the Knicks. He is coming off a two-year stint with the Boston Celtics, but injuries marred his production with that team, leading to him being traded to the Oklahoma City Thunder last summer. Last season, Kemba was still able to put up a decent all-around stat line of 19.3 points, 4.0 rebounds, 4.9 assists, and 1.1 assists, while producing a set of shooting percentages that include a 42% overall clip from the field, a 36% clip from beyond the arc, and an 89% clip from the free throw line.

Of course, Kemba is more known for his amazing tenure with the Charlotte Hornets. He was the 9th overall pick during the 2011 NBA Draft, a draft class that also includes Kyrie Irving, Tristan Thompson, Jonas Valanciunas, Klay Thompson, Markieff and Marcus Morris, Kawhi Leonard, Nikola Vucevic, Tobias Harris, Reggie Jackson, Jimmy Butler, Bojan Bogdanovic, Davis Bertans, and Isaiah Thomas. Kemba was a star during his productive collegiate career as he led the charge for the University of Connecticut Huskies for three years that ended with an NCAA championship in 2011.

Kemba would also go on to win the NCAA Final Four Most Outstanding Player award, the Bob Cousy Award, and the Big East Tournament MVP in that same year. The individual and team success that he enjoyed in college did not immediately translate to the NBA, although he was able to put up a stat line of 12.1 points, 3.5 rebounds, 4.4 assists, and 0.9 steals per game during his rookie year in Charlotte. Kemba eventually blossomed into a fully-fledged star in his sixth year in Charlotte as he notched his first All-Star appearance that eventually led to four straight trips to the February festivities.

However, Kemba never had a lot of success with the Hornets. There were some runs to a playoff appearance, but the Hornets never made it deep into the postseason. After eight seasons with the Hornets, Kemba signed with the Celtics and was again selected to the All-Star Game in his first season there. But it is also true that the partnership did not succeed, leading to Kemba being traded to Oklahoma City. The Thunder agreed to a buyout scenario, helping Kemba become a free agent, which then led to the Knicks acquiring his services. Still, there is much to answer for Kemba’s struggles early this season. As per Dan Devine of The Ringer, the Knicks’ reserves are playing even better than the team’s starters, and that is something that could be a problem especially when the team enters the more important games of the playoffs.

After a red-hot 5-1 start that threatened to make “Bing Bong” the new motto of New York City, the Knicks have more or less settled into the team we expected  them to be heading into the season. They’re better on offense after adding Kemba Walker and Evan Fournier, tied for ninth in the NBA in points scored per possession thanks to a newfound commitment to hoisting 3-pointers; 39.9 percent of their shots have come from beyond the arc, up from 32 percent last  season. They’ve dipped down to 17th in defensive efficiency, though, due partly to the new backcourt’s inability to match the on-ball effectiveness of ex-starters Reggie Bullock and Elfrid Payton.

That simultaneous rise and fall has Tom Thibodeau’s team looking like the photo negative of last year’s squad, which rode an elite defense and a shocking All-NBA turn from Julius Randle to the East’s no. 4 seed. The Knicks enter Tuesday’s meeting with the LeBron James–less Lakers in ninth place at 9-8, with a winning percentage and efficiency differential suggesting they’re somewhere between a 43- and 46-win team—a little above average, but not a real contender. Which, again, seems about right, given both the quality of the previous roster and the moves they made this summer.

Of course, this team is not just about Kemba Walker. While it is true that Thibodeau has mentioned that it will be veteran combo wing Alec Burks who will be tasked to fill in for Kemba’s minutes, this is still a team with a lot of talent on its roster. Randle, who made his first All-Star appearance last season, is struggling with his shooting percentages but he is still putting up the nightly double-double stat lines.

The Knicks are currently sporting a record of 11 wins against 9 defeats, and are positioned at 7th place in the Eastern Conference. After winning their last assignment against Trae Young and the Atlanta Hawks, the same team that booted them out of contention in the first round of the 2021 NBA Playoffs, the Knicks will go up against the Brooklyn Nets bannered by Kevin Durant and James Harden. They will then go back home to the Madison Square Garden to host Zach LaVine, Lonzo Ball, Alex Caruso, Nikola Vucevic, DeMar DeRozan and the Chicago Bulls on Thursday, followed by another very tough matchup against Nikola Jokic and the Denver Nuggets.