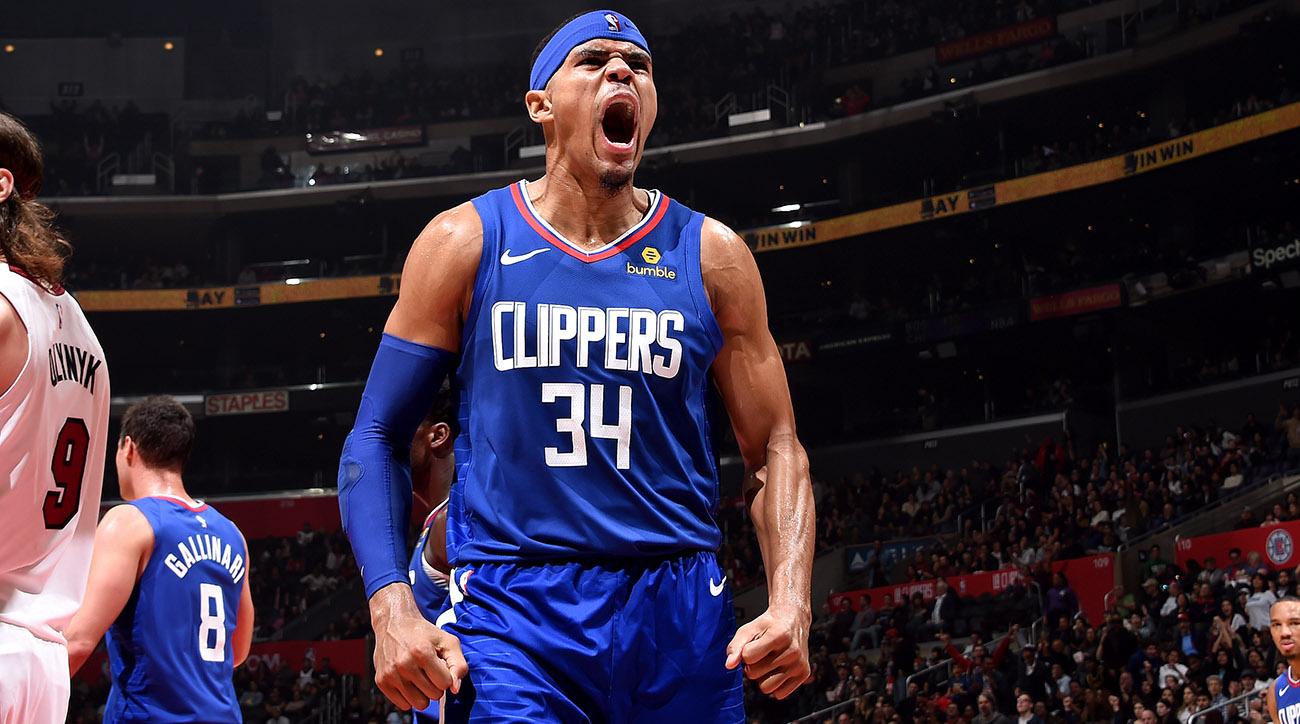 The Process is happening right now for the Philadelphia 76ers as they wasted no time to field in another star talent to their All-Star trio of Joel Embiid, Jimmy Butler and Ben Simmons. The Sixers struck a shocking deal with the Los Angeles Clippers as Philly shipped veteran forward Wilson Chandler, rookie sharpshooter Landry Shamet, stretch big man Mike Muscala, an unprotected 2021 first-round pick from the Miami Heat, a Sixers’ lottery-protected first-round pick, and two second-round picks from the Detroit Pistons. In return, the Clippers sent Tobias Harris to Philadelphia, along with center Boban Marjanovic and sweet-shooting forward Mike Scott.

By acquiring the services of a near All-Star combo forward in Harris, the Sixers have put themselves in a position to arguably claim the top elite spot in the Eastern Conference. Harris will easily slot into the power forward position in Philly’s offense, with Simmons running the show, Butler and JJ Redick staying in the wing, and Embiid dominating down low. However, nothing comes free in this world and there are numerous problems awaiting the Sixers on this deal.

First, the deal didn’t really address the glaring problems that are hounding Philly right now: depth and defense. The Sixers lost two very valuable and versatile player when they traded Robert Covington and Dario Saric in the Butler deal. Embiid, Simmons, and Butler are still logging in heavy minutes each game, and we aren’t even in the playoffs just yet. On the topic of defense, Harris isn’t actually a bad defensive player, but putting him in a starting line-up with the Philly Big 3 and Redick would cost them match-up problems. Who would lock down an opposing team’s speedy and shifty guard in the likes of Kyrie Irving or Russell Westbrook?

For the Clippers, this was a move committed to their futuristic plans. The first-round pick from Miami is one of the most valued future draft picks right now, and they could use that as a valuable leverage for trade negotiations. While Harris has been a key cog in their success this season, there’s no telling if he will re-sign with the team as he is bound to enter unrestricted free agency this summer. Besides, even if they make the playoffs in April, it’s hard to imagine the Clippers making much noise given the current state of their roster.

Chicago gambles on Porter, ships Portis and Jabari to Washington

The Washington Wizards are one of the teams highly-expected to make roster moves before the trade deadline, but people didn’t expect that the Chicago Bulls would end up as their trade partner for small forward Otto Porter Jr. The Wizards sent Porter to the Bulls, in exchange for two stretch forwards in Bobby Portis, Jabari Parker and a 2023 second-round draft pick. Porter has found himself in the trading block for some time now, but not everyone thought that he will end up in Chicago this season.

With Porter on board, here’s what Gar Forman, the Bulls general manager, has to say, via the Chicago Tribune.

“We are excited to add Otto Porter to our team. During his time in the NBA, Otto     has proven to be a terrific 3-point shooter, while also being very efficient. While in his sixth pro season, he is only 25 years old and is someone who will be a good fit for our team moving forward.”

Porter is indeed an upgrade over Parker as the former Wizard is one of the most excellent 3-and-D players in the league, and has the potential to do some more in a very young Bulls roster. He can slot in at either forward positions as the Bulls can now unleash an intriguing line-up of Porter, Kris Dunn, Zach LaVine, Lauri Markkanen and Wendell Carter Jr. However, they also lost the services of Portis, a player his teammates look upon as a leader and cornerstone of the team. Losing Portis will be tough for Chicago moving forward, and getting Porter is an even tougher gamble they’re taking.

For the Wizards, they got rid of Porter’s very lucrative salary as he is still due for $81M for the next three years. With Parker’s contract not guaranteed for next season, Washington has provided themselves some financial flexibility, though their future is still very unpredictable given the predicaments of the recent John Wall injury. Still, the Wizards won this trade as they now have two young combo forwards who can play well with All-Star shooting guard Bradley Beal.

Kings gearing up for playoff push with addition of Barnes

All those petty internal conflicts between the Sacramento Kings front office and head coach Dave Joerger should be in the past now. The Kings are getting more serious with their playoff push, acquiring sweet-shooting small forward Harrison Barnes from the Dallas Mavericks and shipped small forward Justin Jackson, and veteran big man Zach Randolph. The move stirred emotions in social media as news of the trade broke out while Barnes was still playing in a Dallas game, but this deal is something that the Mavericks direly need now that they’re obviously focusing their sights beyond this current season.

Apparently, Barnes already knew that a trade centering on him is bound to happen before the game, via the NBA.com.

“ESPN's Paul Pierce reported on air postgame that Barnes' agent informed him     being traded was a possibility, but Barnes requested to be in the gameday mix.     Barnes and his agent, Jeff Schwartz, were apprised before last night's game that      Barnes was being pursued by the Kings and Hornets, reports Marc Stein of The New York Times. The Kings' offer won out as Barnes opted to play against the Hornets.”

Barnes, who is putting up averages of 17.7 points and 4.2 rebounds this season, will find himself in a starting role for a young Kings team needing an experienced perimeter scorer. It remains to be seen how Joerger will mix up the minutes of Barnes, Buddy Hield and Bogdan Bogdanovic, but it’s hard to imagine the Kings putting Barnes in a sixth man role.

This move also makes much sense for Dallas as they now got rid of Barnes’ hefty contract. It is obvious that their partnership with the former Golden State Warriors forward wasn’t turning out quite as expected, and with the recent additions of wing shooters Tim Hardaway Jr. and Courtney Lee, Barnes has turned out to be an expendable asset for the team. Dallas is expected to buy out the expiring contract of Randolph, while they can also have the luxury of developing the potential of Jackson, another wing scorer who had his share of brilliant moments this season.

Heat and Suns swap bad contracts of Johnson and Anderson

In what could arguably be the most unheralded trade deal before the deadline, the Phoenix Suns have agreed to send stretch forward Ryan Anderson to the Miami Heat for the services of combo guard Tyler Johnson and shooting guard Wayne Ellington. The move saw two teams swapping incredulously bad contracts, with the Heat gaining some salary cap and luxury tax relief, while the Suns acquiring a potential starting point guard to pair up with star shooting guard Devin Booker.

Ira Winderman of the South Florida Sun Sentinel summed up what this move means for the Heat’s financial situation.

“Anderson's contract is more palatable from a cap standpoint, due just about the same amount as Johnson this season but less than Johnson in 2019-20, at $15.6  million if waived by July 10, as is expected. The Heat then would be able to "stretch" that $15 million over three seasons on their salary cap and luxury tax, unless 2020 remains targeted as a free-agency offseason for the team.”

With the league’s new implementation of the waive-and-stretch provision, the Heat could waive Anderson’s hefty contract and stretch his salary for a couple of years, giving Miami more financial flexibility. Miami has one of the worst salary books in the league right now, and it was expected that they will start moving these lucrative contracts before the trade deadline.

For the Suns, acquiring Johnson could be a potential risk. Johnson isn’t a natural point guard, though he has shown flashes of being a good playmaker. On the good side, the 6-foot-3 combo guard is a gritty defender, an above-average three-point shooter, and has enough strength and quickness to drive to the rim and finish inside.

The Suns aren’t expected to field in minutes for Ellington as reports have it that the team will possibly buy out his contract, and give the sharpshooting guard an opportunity to help a playoff contender with his excellent marksmanship from beyond the arc.