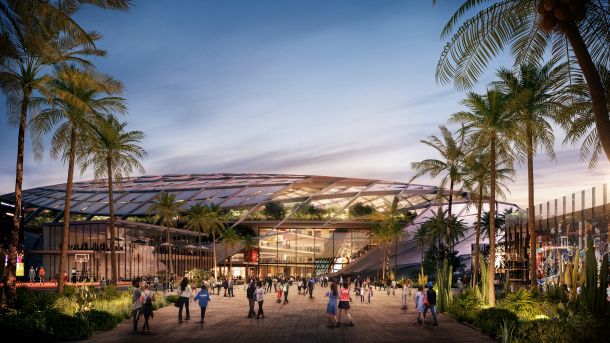 The Los Angeles Clippers will usher in a new era in their franchise as they are all set to build their own home arena. The Inglewood Basketball & Entertainment Center will be the new home of the Clippers, and it is targeted for completion by the year of 2024. Clippers team owner Steve Ballmer expressed his excitement on this development, and says that he just wants the Clippers to have the “best home in all sports,” per the team’s official announcement on NBA.com.

“My goal is simple. I want the Clippers to have the best home in all of sports. What that means to me is an unparalleled environment for players, for fans, for sponsors and for the community of Inglewood. Our goal is to build a facility that resets fans’  expectations while having a transformative impact on the city we will call home.”

It’s no coincidence that the new arena plans have come simultaneously with the team’s recent success. The franchise will also roll out arguably the strongest team in their history with the arrival of Kawhi Leonard and Paul George, especially given the fact that they retained their core last season in Patrick Beverley, Lou Williams, and Montrezl Harrell.

Gillian Zucker, the team’s president of business operations, gave an explanation on why they chose Inglewood as the location of their new home court.

“Inglewood is a diverse, dynamic community blessed with a skilled workforce, emerging infrastructure and a bold economic blueprint for the future. In addition to the thousands of jobs this facility will create for the local community, we are equally committed to working with our new neighbors in the continuing renaissance developing in the City of Inglewood.”

When the arena is completed in 2024, they will officially veer away from the Staples Center, their home that they share with the city’s favourite, the Los Angeles Lakers. The Lakeshow has long been the better attraction in town, but with the Clips’ recent roster movements and success, that could be far from the truth very soon.

Aside from the arena, the proposed facility will also house the Clippers’ training facility, and their business and basketball offices. What’s more remarkable in the proposed project is that the facility won’t emit greenhouse gas through a “combination of carbon offset credits and sustainable design features.”

In a similarly-exciting note, Ballmer also hinted that he is considering a team name change when the Clippers move to their new arena at Inglewood, per Bill Shaikin of the Los Angeles Times.

“Hopefully, by the time we’re done, it won’t be a Clipper logo,” Ballmer said. “It will be some naming rights sponsor.”

And Ballmer would not rule out changing the logo — and the colors, and perhaps   even the nickname itself — when the Clippers move into the new arena.

While this is still a mere five years away from possibly happening, the thought of it will clearly excite Clippers fans. The organization has long been lurking behind the big shadow of the storied Lakers franchise, and it is high time for them to put up their own identity.

We still have lingering questions on why and how a powerhouse Boston Celtics team led by Kyrie Irving and Al Horford failed to meet expectations last season. Head coach Brad Stevens’ rotation was questioned by many, and there were conflicts with the leadership of the veterans and the desire of the young guns to continue their inspired playoff run the season before. Marcus Smart, the team’s resident defensive ace, recently appeared at ESPN’s “The Jump” and sounded out on the team’s struggles.

"Let's call a spade a spade, right? It's true. We were dysfunctional, you know. It  takes a lot for guys, especially athletes, to own up to that and say 'yeah, things didn't go quite the way we wanted', but we've gotta look ourselves in the mirror, 'what did I do, what could I have done to help?' Like I said, we all took part in it, we all could have done something better to help that team."

Smart, 25, also saw lesser minutes on the court last season. His 27.5 minutes per game last year was his lowest since the 2015-16 season. Still, Smart was able to contribute 8.9 points, 4.0 assists, 2.9 rebounds and 1.8 steals per game, while shooting a career-high 36% clip from beyond the arc. While Smart’s name has been included in numerous trade talks, it’s safe to assume that Boston will hold on to him until his contract expires in 2022.

Smart also took the chance to express his gratitude to Kyrie, who helped him get through the death of his mother last September.

“For me, personally — I can’t speak for other guys — but for me, personally… Kyrie Is a great teammate. I’ve had sit-downs with Kyrie where things for me weren’t going too well and he’s pulling me aside. And it wasn’t even really about basketball. Everybody knows what I’ve been through with my mom, losing her and everything. Kyrie’s one of the first guys to text me, to call and talk. When I got back to Boston, he pulled me to the side and we talked. And as far as basketball, just helping me slow the game down and recognize and understand it more. So as a teammate, I love him for it.”

With Irving and Horford leaving for respective teams, the leadership torch is now on Smart’s hands. Newly-acquired All-Star point guard Kemba Walker will indeed be the main man of the team, but he still has a long way to go before he jells with the team. Third-year small forward Jayson Tatum should break out of his shell this season, while young budding star Jaylen Brown could be a borderline All-Star. The Celtics are still hoping for Gordon Hayward to return to his old, fiery version before his horrible injury, but that will be a long shot. But it will be Smart’s court stability and defensive presence that will serve as the glue for the team.

While the Celtics will be a strong elite team in the upcoming season, they will face plenty of challenges in the Eastern Conference. The Milwaukee Bucks have retained their core and the continued growth of reigning MVP Giannis Antetokounmpo should be a thing to watch out for. The Philadelphia 76ers have also amped up with the addition of Horford and Josh Richardson, while Brooklyn Nets and the Indiana Pacers could be darkhorse contenders if they are fully healthy.

The Washington Wizards have long been in search for a new general manager after the firing of Ernie Grunfield. They have found the answer in their own flock as the franchise officially promoted interim general manager Tommy Sheppard to full-time duties, per Candace Buckner of The Washington Post.

“The Washington Wizards removed the interim tag from Tommy Sheppard’s title Friday, making him the 12th general manager in franchise history, according to a person with knowledge of the team’s new structuring.

Sheppard, 50, has been the interim president of the Wizards since April 2, when    Ernie Grunfeld, who had held the position for 16 seasons, was fired. Under Sheppard’s direction, the team remolded its roster through the draft, free agency and a trade that emphasized the Wizards’ new vision to add young and developing players.”

With Sheppard at the helm, the Wizards have made some decent moves this offseason to restructure their roster. They traded away Dwight Howard and re-signed Thomas Bryant, their young big man who could be the cornerstone of their franchise. Considering the fact that starting point guard John Wall will potentially miss the entire season, the team signed a quality playmaker in Ish Smith and gave scoring guard Isaiah Thomas another shot at reviving his career.

Before Sheppard worked for the Wizards, he served as the senior director of team services and player relations of the Denver Nuggets. The biggest challenge for Sheppard and his front office right now is how to deal with the Wall and Bradley Beal situation. Beal has grown into a bonafide superstar, but Washington’s inability to be successful could prompt the combo guard to issue a trade demand. Wall’s has been injury-prone throughout his career, and his massive contract will be very difficult to trade.