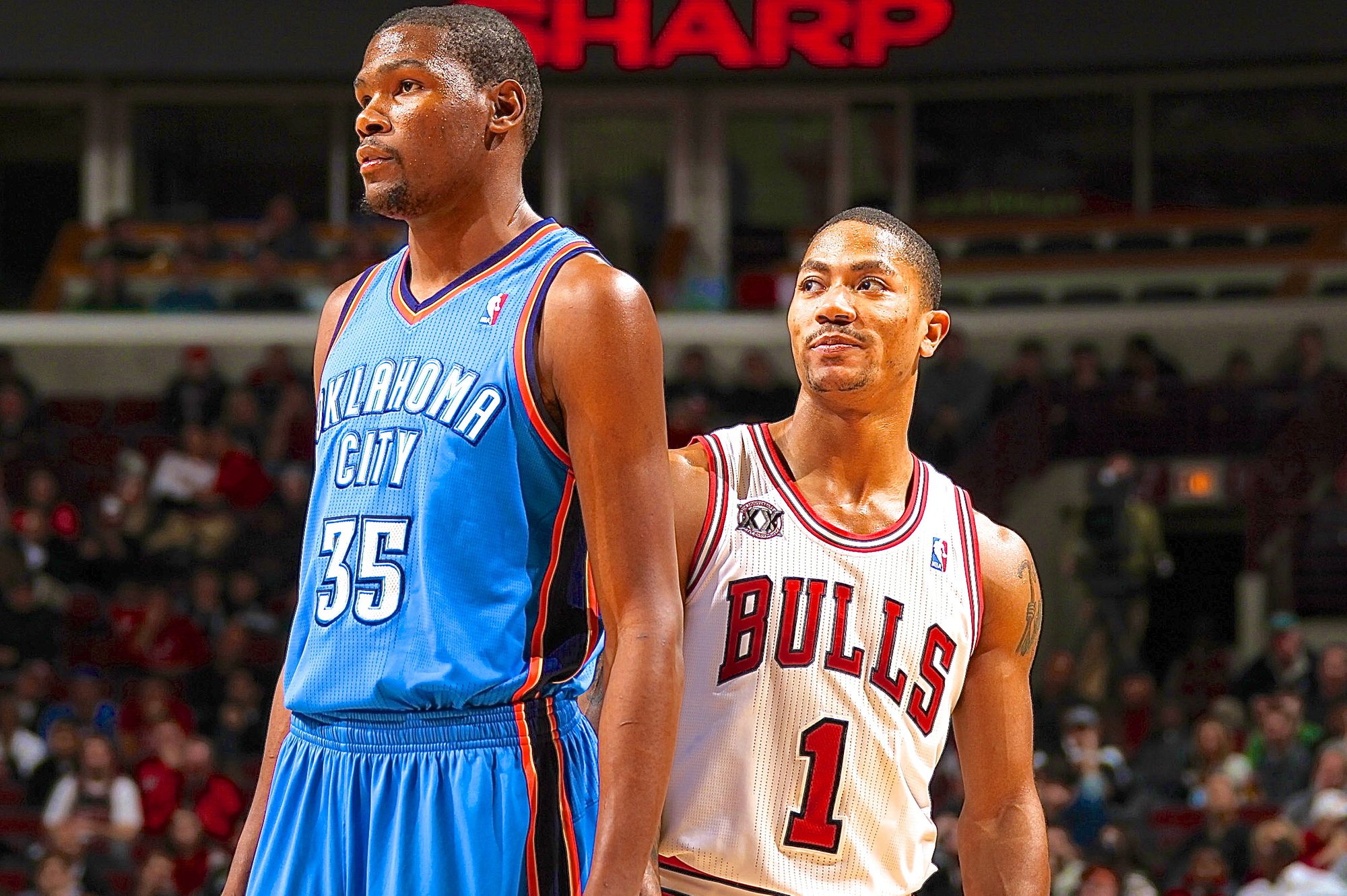 Durant opens up on Thunder past and relationship with Warriors teammates

Newly-acquired Brooklyn Nets superstar forward Kevin Durant has shed some light on the journey he has taken with his former teams, including his comments on the various conflicts and issues that he had to undergo with the Oklahoma City Thunder and the Golden State Warriors. The two-time Finals MVP sat down with J.R. Moehringer of the Wall Street Journal, and one of the topics he talked about was the negativity that he received from the Thunder organization when he returned to the Chesapeake Energy Arena as a Warrior in 2017.

"Such a venomous toxic feeling when I walked into that arena/ And just the organization, the trainers, and equipment managers, those dudes is pissed off at me? Ain't talking to me? I'm like 'Yo, this is where we going with this? Because I left a team and went to play with another team?'

I eventually wanted to come back to that city and be part of that community and organization, but I don’t trust nobody there. That s*** must have been fake, what they was doing. The organization, the GM, I ain’t talked to none of those people, even had a nice exchange with those people, since I left.”

While he did not do a LeBron James-like The Decision during his free agency venture in 2016, the timing of his jump to Golden State is definitely something that stirred some heat. He, Russell Westbrook and the Thunder were able to push the Warriors on the brink of elimination with a commanding 3-1 lead in the 2016 Western Conference Finals, only to drastically lose steam and be defeated in seven games. The Warriors would then lose the championship to the Cleveland Cavaliers, prompting them to pursue another star to pair with Stephen Curry, Klay Thompson and Draymond Green.

When speculations rose that the Warriors and Durant had mutual interest in a partnership, many people laughed it off and put it off as just a spreading rumor. But the dream became a reality, and Durant would officially don the blue-and-gold Warriors threads. It created such animosity between him and the Thunder fan base, including the public burning of his jerseys, vandalism on his properties, and the loud boos and name-calling he received when he and the Dubs visit Oklahoma City.

But what is more surprising with Durant’s WSJ interview was him hinting that he wasn’t totally happy with his situation with the Warriors.

As time went on, I started to realize I'm just different from the rest of the guys," Durant said. "It's not a bad thing. Just my circumstances and how I came up in the league. And on top of that, the media always looked at it like KD and the Warriors. So it's like nobody could get a full acceptance of me there."

This was definitely something surprising, given how so successful Durant’s stint was with in Golden State. Of course, we can remember that game last season when he and Draymond got so heated with each other. Reports have it that the conversation even went straight to the locker room, with Draymond saying that the team knows that Durant will leave in free agency. The two stars eventually talked things through, but that altercation could have already written something on the wall as to KD’s future in Bay Area.

Still, it’s really astonishing how Durant feels as a former Warrior. He took his talents to Golden State for the main purpose of chasing championships, and he got two of it. Of course, we know that superstars like KD want to create their own legacies and Durant may have felt that the true highlight of his career is yet to come. Curry, the Warriors long-tenured star point guard, responded to his former co-star’s comments through a sit-down with ESPN analyst and host Rachel Nichols.

“I mean, that's tough. There's so many narratives that go on, especially when you're at the top of the league. No matter how, you know, the full transition happens to Brooklyn, him separating himself from the Warriors -- that's gonna happen. I think he knows, you know, what we were about as teammates, what we were about as friends on and off the court. And again, nobody is gonna take away the accomplishments we had. But at the end of the day, whatever he, you know, needed to do to make that decision and however he wants to explain that -- that's just what's gonna happen."

While we don’t really know where Durant’s true happiness lie, it’s exciting to see how he will mesh with Kyrie Irving in Brooklyn. Irving is also known as a very unpredictable star, having gone back and forth in his commitment to re-sign with the Boston Celtics. Of course, that’s not to mention how he demanded a trade from the Cavaliers in 2017, just a year after he and LeBron brought the championship to Cleveland. The Nets are banking on the fact that both stars were already close friends for years. However, we may have to wait until the 2020-21 season to see Durant and Irving on the court at the same time as the Nets front office has reiterated that they won’t rush KD back from his recovery and rehab.

Derrick Rose, the youngest MVP in the league, will now embark on another chapter in his NBA career. He just recently signed with the Detroit Pistons, providing his new team with the surefire scoring punch they direly missed last season. The 30-year old three-time All-Star is coming off an outstanding season with the Minnesota Timberwolves, where we witnessed a resurgence in his career. We still have our fingers crossed, but Rose should definitely have another productive year with the Pistons.

Rose’s basketball career is indeed a great story paved with a lot of plot twists. After his MVP year in 2011, Rose would suffer successive major injuries in his knees. It has certainly taken out a large part of his elite athleticism, but we can never question his heart and resiliency. During his short stint with the New York Knicks, we can remember the time he left the team at the middle of the season, prompting reports that he may have played his last game in the NBA. Through an excerpt of “I’ll Show You,” an autobiography he has co-written with Sam Smith, Rose opened up on that difficult time in his life. Triumph Books allowed The New York Post to show this excerpt of the book:

“I had decided I was done playing. I saw the same thing that was happening with the Bulls was going on with New York. I could tell that the season wasn’t going to be the season everyone thought, that I thought. I didn’t know if I wanted to hoop anymore. Especially when it started to feel like a business. Of course, you know it’s a business. They always say that. But you know it’s also hoopin’. But it had started to feel like all business, no joy. That’s when I wanted out. I wasn’t having fun.”

This isn’t something new in the NBA. We have seen a lot of players just come and go with their teams, but that’s just how business is done in the league. Loyalty is overrated in terms of respective teams build their roster for contention. But for someone who has endured so much pain and battled through it, Rose’s emotional approach to this situation is understandable. Rose would still come back that season, but his stint in New York was already surrounded with so much conflicts.

Rose, who put up 18.0 points, 3.8 rebounds and 4.4 assists per contest for the Knicks that year, even had some choice words for the Knicks front office.

“New York could have done the same thing. I would have done that. Me stepping away from the team that day had nothing to do with them; I was good with New York. But they didn’t sign me, didn’t even talk to me. No communication. I thought, “I just gave y’all 18 a game. At the point guard position. And you go draft a point guard?”

Steve Mills is talking all this black dude stuff with me, like we’re brothers and all this. He’s saying that s–t, making me think it’s going to make us closer. Come on, be yourself.”

Rose is not just being too emotional here. It was a comeback year for him, and also quite a productive one at that. They may have finished the season with a lowly 31-51 record, but one could make an argument that the system was the one at fault. Their roster that year was filled with the right amount of star power, combined with quality role players. Carmelo Anthony was still at the peak of his career and Kristaps Porzingis was already in his sophomore year. They have an excellent third-option scorer in Rose, and their supporting cast headed by Joakim Noah and Courtney Lee was no slouch, either. They could have tried out a new coaching staff and a new system fit for that manpower, but the Knicks organization ultimately decided to go on a new path.