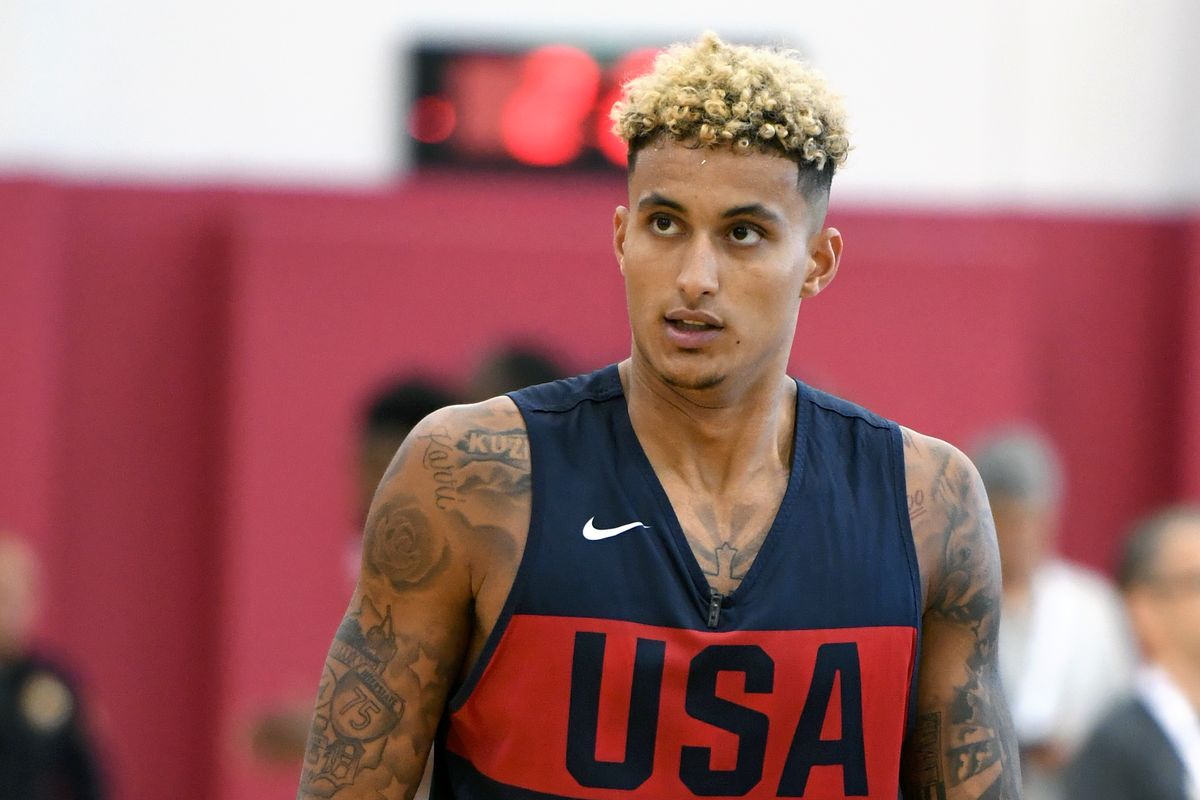 In an unfortunate turn of events, Los Angeles Lakers young budding star forward Kyle Kuzma has withdrawn from the national team due to a sore ankle injury, per ESPN’s Brian Windhorst. With the departure of Kuzma from the team, new Team USA head coach Gregg Popovich now has the required 12 players at his disposal.

“Kyle Kuzma of the Los Angeles Lakers will not play for Team USA in the upcoming  FIBA World Cup after it was determined that his left ankle injury would prevent him from participating, USA Basketball announced Saturday.

With the loss of Kuzma, the USA Basketball roster is now finalized with 12 players.”

It was definitely an unfortunate situation for the 24-year old Kuzma. He was one of the bright spots during the team’s victory against the Australian national team in their first match-up. He hit three shots from beyond the arc on his way to scoring 12 points. With his excellent perimeter marksmanship and an ability to drive to the rim, Kuzma was highly-expected by many to make it to the final roster.

With Kuzma pulling out of contention for the line-up competing in the upcoming FIBA World Cup at China, Popovich’s roster is now complete and final. Kemba Walker of the Boston Celtics is the only top-tier star in the roster and is expected to lead the squad. He will be joined by his teammates Jayson Tatum, Jaylen Brown and defensive ace Marcus Smart, who has completely recovered from an injury that kept him out of some of Team USA’s tune-up games.

Even though the Americans are still regarded as the favorites to win the World Cup again this year, there is a cloud of concern hovering on their campaign. With the usual stars like LeBron James, Kevin Durant, Stephen Curry, James Harden and Anthony Davis not playing, other powerhouse teams have the golden opportunity to finally win the World Cup. On top of that, Team USA lost to the Australians last week, prompting more concerns about the chemistry of the squad. However, Popovich emphasizes that the loss was already kind of expected, per the Associated Press.

"Some of it is expected with a new group that's trying to learn about each other and   learn a system. So it's not surprising. But the Aussies gave us a great lesson as far as  where we want to be and how you have to play in this kind of a competition.''

Popovich, who also expressed his disappointment on the Kuzma injury, will bank on improving the team’s chemistry and putting in his brilliant game plans to use. Mitchell also says that the loss to Australia will serve as a learning curve and an important wake-up call for him and his new teammates, per Jake Michaels of the ESPN.

"At the end of the day, this game doesn't count. Obviously it hurts to lose but I look at this as more of a learning experience as opposed to we just lost. That's the mindset. If  you think of this as a loss you start to get carried away.

We have the film and we're going to watch it on the plane and be ready for Canada, that's the best thing. We've got some things to work on but I think we did a pretty good job. We've just got to talk a bit more and communicate. For us, it's continuing to build."

Mitchell and the Americans would then learn from their mistakes and beat Team Canada with a wide margin. They are also grouped with Turkey, Czech Republic and Japan in Group E of the tournament.

For Kuzma, who averaged an impressive stat line of 18.7 points, 5.5 rebounds and 2.5 assists for the Lakers last season, he has a lot to prove this year. The 23-year old scorer believes that he could be the Lakers’ third star behind James and Davis. It is anticipated to be a break-out year for Kuzma, who also recently switched agents for on and off court representation. Kuzma has chosen the Creative Artists Agency (CAA) and will be represented by Leon Rose, LeBron’s former agent.

The bad wave of the roller coaster isn’t stopping for Los Angeles Lakers polarizing big man DeMarcus Cousins. Just a couple of weeks after tearing his ACL during a training session at Las Vegas, Cousins is now facing allegations from his ex-girlfriend, Christy West, leading to the police issuing a warrant of arrest to the 29-year old NBA star. The TMZ Sports was the first to report about this very concerning issue, while also including an audio clip of Cousins’ alleged foul argument with West.

“DeMarcus Cousins allegedly told his ex-girlfriend he'd put a "bullet in [her] f*cking head" if she didn't let their child come to his wedding ... and the woman claims she has the audio to prove it.

TMZ Sports has obtained court docs and a police report filed by DC's ex-     girlfriend, Christy West -- claiming the NBA star threatened her on August 23, just one day before Cousins was set to marry his new girlfriend, Morgan Lang, in Atlanta.”

Furthermore, A.J. Perez of the USA TODAY reports that the Alabama police department has indeed issued a warrant of arrest of Cousins.

“A warrant has been issued for the arrest of Los Angeles Lakers center DeMarcus Cousins on a misdemeanor domestic violence charge.

Mobile police spokesperson Charlette M. Solis told USA TODAY Sports on Thursday that "an arrest warrant has been issued.” The third-degree harassing communications charge was listed on the Mobile municipal court website, although no other information was provided.”

NBA players like Matt Barnes, his Lakers teammate Anthony Davis and Warriors defensive anchor Draymond Green attended the said wedding. His seven-year old child was not present during the big day. The Lakers front office are also looking into the allegations and are “gathering information.”

"We are aware of the allegation involving DeMarcus Cousins and, of course, take this claim seriously. We are in the process of gathering information and will reserve further comment at this time."

Cousins, who put up 16.3 points, 8.2 boards and 3.6 assists for Golden State last season, is set to miss the entire 2019-20 NBA season because of the ACL injury. The Lakers have already signed a replacement for him in former Defensive Player of the Year Dwight Howard. It remains to be seen if there’s still hope that Cousins will play this year, although his domestic violence issues could further dampen any light to that happening.