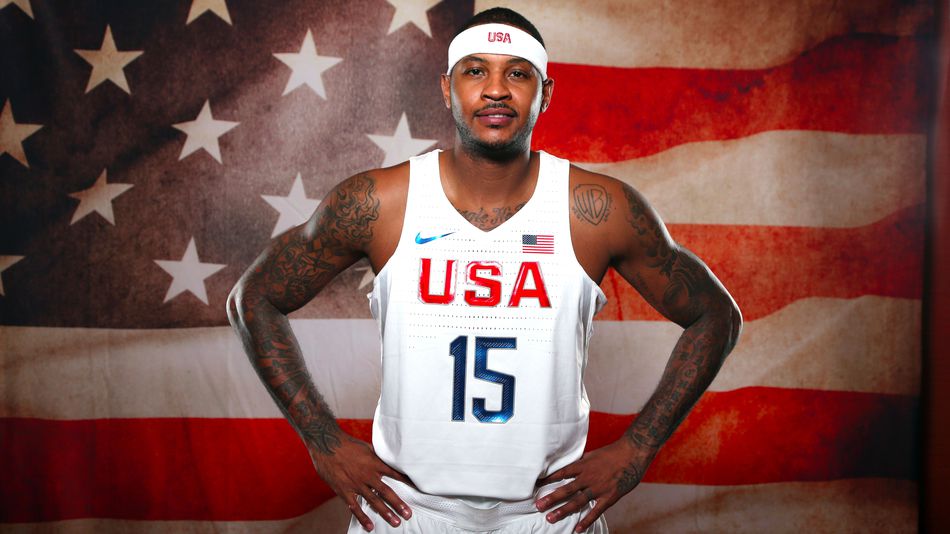 USA Basketball Managing Director Jerry Colangelo has recently confirmed earlier reports saying that the organization has decided to decline 10-time All-Star Carmelo Anthony’s request to try out for the national team roster competing in 2019 FIBA World Cup later this month. Colangelo spoke to Chris Mannix of Sports Illustrated and hinted that a potential Anthony return is not aligned to their plans of building up a new core for the years to come.

“I love Carmelo. He made a great contribution. He was a very good international player. But for where we are and what we’re doing, that conceivably could have been a distraction. I understand why the request was made. He’s trying to reestablish  himself. I think that has to be done in the [NBA].”

The 35-year old veteran scoring forward is one of the most decorated stars in Team USA history. He was named as the USA Basketball Co-Male Athlete of the Year in 2016, and has won three Olympic gold medals with the team. It could have been an intriguing sight to see him don the national team jersey again, but Colangelo and the rest of the organization are bent on achieving their new goals and vision under newly-minted head coach Gregg Popovich of the San Antonio Spurs.

Anthony, who is still in search for a new home in the NBA, could have been a solid contributor for a USA team in need for an injection of star power. Numerous top-tier names such as LeBron James, James Harden, Anthony Davis, and Damian Lillard have withdrawn from the duty, while stars Kevin Durant and Klay Thompson are still recovering from major injuries. Team USA will be parading more young players than usual, and their current roster should be the least skilled and least experienced at least in this decade.

Still, Colangelo is very optimistic of their plight to defend their title and told The Athletic’s Michael Lee that the organization is focused on the players who are here to represent, not on those who are not.

“There’s no big personalities that are going to detract from anything. They’re just happy to be here and they know they have a legitimate shot and they see it. They can capture the opportunity here. We are a target and yeah, we’re the guys at the top of the hill and people want to knock us off the ledge but that’s OK. That’s what it’s all about. Everybody wants to compete. They want to win. Everybody loves the game. I stand by what I said before. What are we supposed to do? Lay down for somebody? That’s not going to happen.

I feel this way. There’s been so much play on who’s not here, all the players who have withdrawn. I want to make sure the players who are here, after we win, get the credit that they deserve. That’s what I hope for.”

Despite the lack of superstar names, Team USA will be rolling out a combination of young rising stars and tough veteran role players. Boston Celtics newest All-Star point guard Kemba Walker is set to lead the squad, while budding stars like Donovan Mitchell, Jayson Tatum, Kyle Kuzma and Jaylen Brown could make up the core of the team moving forward.

This is arguably the year that other powerhouse countries have the greatest opportunity to knock off the Americans. Nikola Jokic, Bogdan Bogdanovic and Milos Teodosic will make up the core of the Serbian team, while Rudy Gobert and France should be a darkhorse contender for the championship.

There were several speculations last season that long-time San Antonio Spurs head coach Gregg Popovich could be set on retiring this year. After all, the 70-year old tactician has been coaching in the NBA for 23 years, winning five championships for the Spurs along the way and bagging three Coach of the Year awards. But it is becoming apparent that Popovich isn’t done just yet. Although he has helped out in coaching USA teams in the past, this will be the first time that he will be at the top of the helm.

Popovich told ESPN’s Brian Windhorst that he took his time in deciding whether to accept the national team duty or not, but it was ultimately the honor of serving the country that mattered in the end.

"I thought about it. I met with Mr. [Jerry] Colangelo [Team USA's managing    director]. I took a little bit of time. We talked several times. I knew what I was getting into. It's your country. You say yes. You man up and try to surround yourself with as much brainpower as you can."

Coach Pop will be facing quite a challenge in his first attempt to lead the team to another championship. NBA superstars have withdrawn from the squad, leaving him with young, rising but inexperienced stars at his disposal. But Popovich and his coaching staff have done a tremendous job atoning for that lack of experience by inviting a number of veteran stars and role players to provide court smarts and steadying presence. Among those quality vets are Kemba Walker and Marcus Smart of the Boston Celtics P.J. Tucker of the Houston Rockets, Thaddeus Young of the Chicago Bulls, Brook Lopez of the Milwaukee Bucks and Kyle Lowry of the Toronto Raptors.

Jerry Colangelo, the team’s managing director, expressed how impressed he is with how Popovich has been handling the big responsibility, per Michael Lee of The Athletic.

“He has been totally focused and engrossed in this responsibility. This is big to him. He said to the guys (Sunday night) in his talk, he’s been blessed with a lot of success. But in ‘04, what he went through, he said he wanted to jump in a hole by the whole thing. He’s lost a couple of big games in the playoffs, in the championship round. He talked about the last one they lost (to Miami in 2013). They pale in comparison to how bad he felt in ‘04, because he was representing his country. He said, that loss in Greece in the Olympics in ‘04, ‘was the worst defeat of my life.’ He says, ‘I still think   about it.’”

Even without those top-tier superstars, the Americans should still be the heavy favorites thanks to Popovich’s brilliant team-first system that prioritizes fluid ball movement and constant off-ball screens. He has also installed his former player and now Golden State Warriors head coach Steve Kerr as his lead assistant coach, another ball movement and pace-and-space offense savant.

Opposing the rumors that the Warriors front office and coaching staff have tried to rush his injury recovery to return and play during Game 5 of the NBA Finals, now Brooklyn Nets star Kevin Durant told Yahoo Sports’ Chris Haynes that there’s no truth to those speculations.

“Hell, no. How can you blame [the Warriors]? Hell, no. I heard the Warriors   pressured me into getting back. Nobody never said a word to me during rehab as I was coming back. It was only me and [director of sports medicine and performance] Rick [Celebrini] working out every day. Right when the series started, I targeted Game 5. Hell, nah. It just happened. It’s basketball. S--- happens. Nobody was responsible for it. It was just the game. We just need to move on from that s--- because I’m going to be back playing.”

Durant would suffer a torn Achilles injury in that fateful game, ending his season and ultimately, his stint with the Warriors. The two-time Finals MVP also told Haynes that he and the Warriors’ medical staff were aiming for Game 5 as his most probable return to the court, hinting that it’s not the fact that the team was down 3-1 in the series that prompted him to play again.