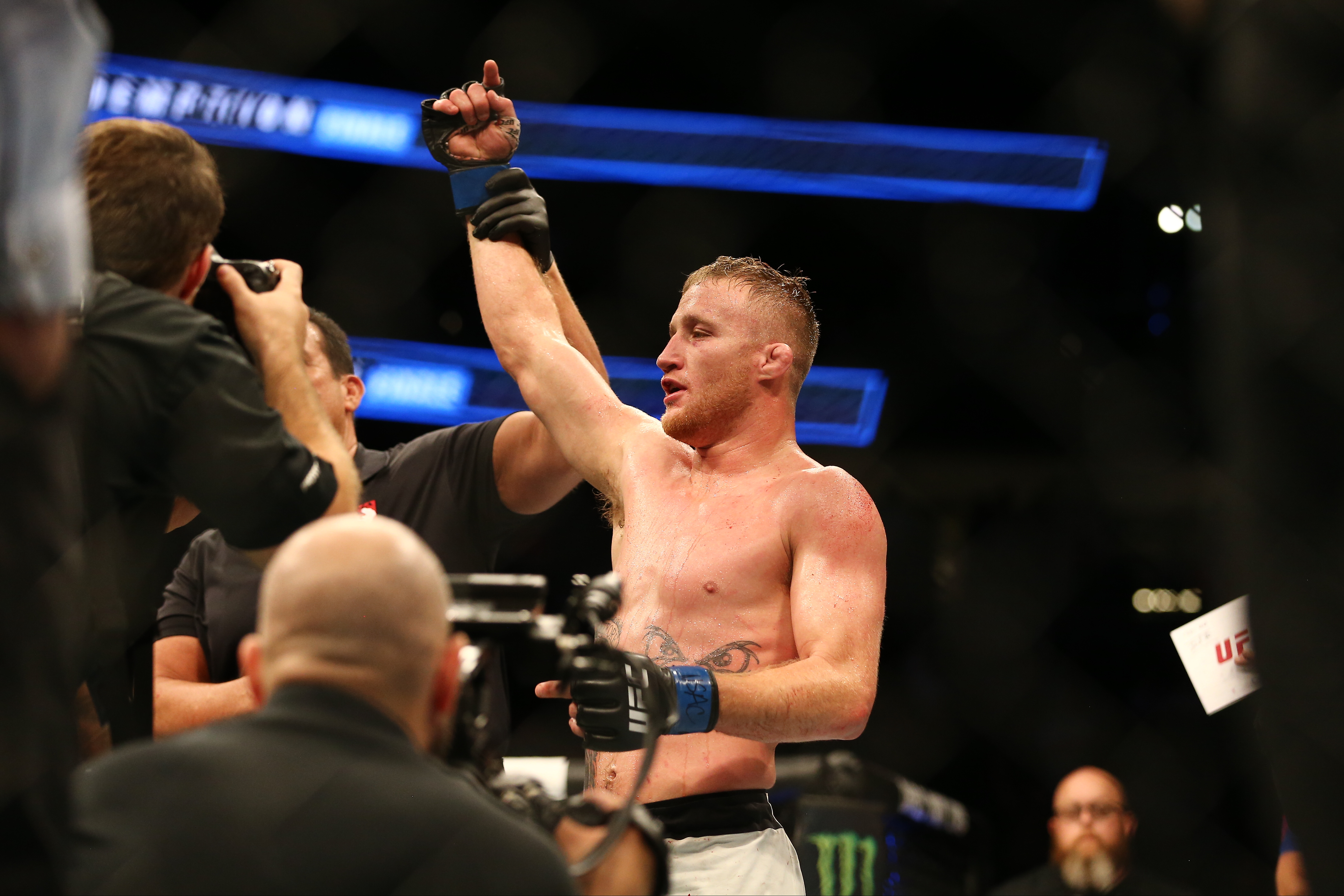 Newcomer Delivers Fight of the Year Candidate in UFC Debut

Remember the name: Justin Gaethje. We’ve got a feeling that we’re going to hear more of him in the coming months and maybe years.

Justin Gaethje is known for his run as the Lightweight champion of the little known World Series of Fighting ( WSOF ) promotion, which really tells us that he isn’t well known at all. But before Gaethje made his debut at the TUF 25 Finale, he made sure that those who didn’t know him knew what to expect:

"Fans come for a shot of adrenaline, and that's what I give you. I'm building a brand, and that brand is violence. I promise you I'm the most violent guy in this division. Like I said, I won't go for a submission if I drop him. I'm gonna tell him to stand back up so I can do it again. Knockout, and if he survives till the end of the fifth, I'll give him a high five."

Violence is what makes the sport of MMA exciting. It’s what sells fights. That’s why the likes of Chuck Liddell, Wanderlei Silva, Mark Hunt, Diego Sanchez and Robbie Lawler are fan favorites. These fighters have given us some of the most brutal, bloody and action packed fights in MMA history. It’s also Justin Gaethje’s trademark.

Coming To the UFC

Coming into the TUF Finale, Gaethje was unbeaten in 17 fights and boasted of 14 knockouts. Of his 10 bouts in the WSOF, only one went the distance. During that bout, Melvin Guillard missed weight by four pounds.Gaethje holds the WSOF record for most title fight wins ( 6 ) and most consecutive title defenses ( 5 ). But after three and a half years of taking the WSOF by storm, he became a free agent. After a tug of war, he chose the UFC over Bellator. Immediately, he asked for the ‘scariest’ lightweight for his UFC debut. Said Gaethje via Twitter:

“Lets C one of the "big league boys" put me to sleep. I want the scariest lightweight possible first. This 0 has to go! Contract signed”

With the UFC’s Top 4 lightweights unavailable, UFC President Dana White booked Gaethje a fight with the next highest ranked guy in the division- #5 Michael Johnson.
Known as the Menace, Johnson boasted of a 9-5 UFC record. He was 1-3 in his last three bouts but his losses came against Nate Diaz and Khabib Nurmagomedov. Prior to fighting in the UFC, Johnson competed at the regional circuits and won Lightweight titles under the MFL and XCF promotions. Johnson may not have been the ‘scariest’ lightweight in the UFC but for a guy making his UFC debut, the Menace was supposed to be a handful.

Johnson said Gaethje was fighting out of his league challenging him. The Menace said he would give the cocky ex-WSOF lightweight champ a rude awakening and a taste of his own medicine when they fight. Johnson vowed to fight fire with fire and put Gaethje back to the little leagues where he belongs.

Fight of the Year?

Not all fighters can back up their talk. Conor McGregor? He was called Mystic Mac for being able to predict the outcome of his fights. Justin Gaethje? He doesn’t predict outcomes. He promises violence. And more violence. Whether it’s his or his opponent’s head that gets chopped off doesn’t matter. What he cares about is giving the fans an adrenaline rush. He promised violence against Michael Johnson. He delivered, not just violence, but a ten minute war which experts say is a solid Fight of the Year Contender.

In 2016, we had Cub Swanson vs Doo Ho Choi at UFC 206. The year before, Robbie Lawler’s five round bloodbath with Rory MacDonald at UFC 189 got the nod. In 2013, Jon Jones’ war with Alexander Gustafsson won the award. And yes who could forget the epic Chuck Liddell vs Wanderlei Silva showdown at UFC 79 in 2008. The list goes on. Perhaps you can add Justin Gaethje vs Michael Johnson to the list.

Back and Forth War

It wasn’t a one-sided affair. In fact, the more accurate and powerful Johnson rocked Gaethje on multiple occasions. But that’s the beauty of Justin Gaethje. He takes some to give some. With his iron chin and indomitable will, he survived Johnson’s big bombs and kept his aggression. The fight turned to a back and forth war.

By round two, both fighters looked tired. But Johnson was weakened by Gaethje’s leg kicks and could barely stand. He tried to lure Gaethje to the ground. But as promised, Gaethje stood him up and went for the knockout. Big John saved Michael Johnson from further damage. Justin Gaethje was victorious in a violent war. The bout ended in a knockout, as promised.

Justin Gaethje’s sick UFC debut earned him two post fight bonuses: Fight of the Night and Performance of the Night. That’s a cool $100K in total. Not bad for a first timer. Impressive, really. With the win, Gaethje has nowhere to go but up. He just dispatched the fifth ranked lightweight in the promotion. After the bout, he called out 2nd ranked Tony Ferguson for an interim title bout.

Ferguson has won nine consecutive bout and has not lost since 2012. He was slated to fight #1 Khabib Nurmagomedov but that didn’t push through. Ferguson, Nurmagomedov and McGregor are the Big Three of the lightweight division. For now, it’s uncertain if Dana White is going to grant Justin Gaethje his wish. But after a debut like no other, you bet he’s thinking about it. With his devil may care attitude and penchant for violence, sky is the limit for Justin Gaethje- win or lose.