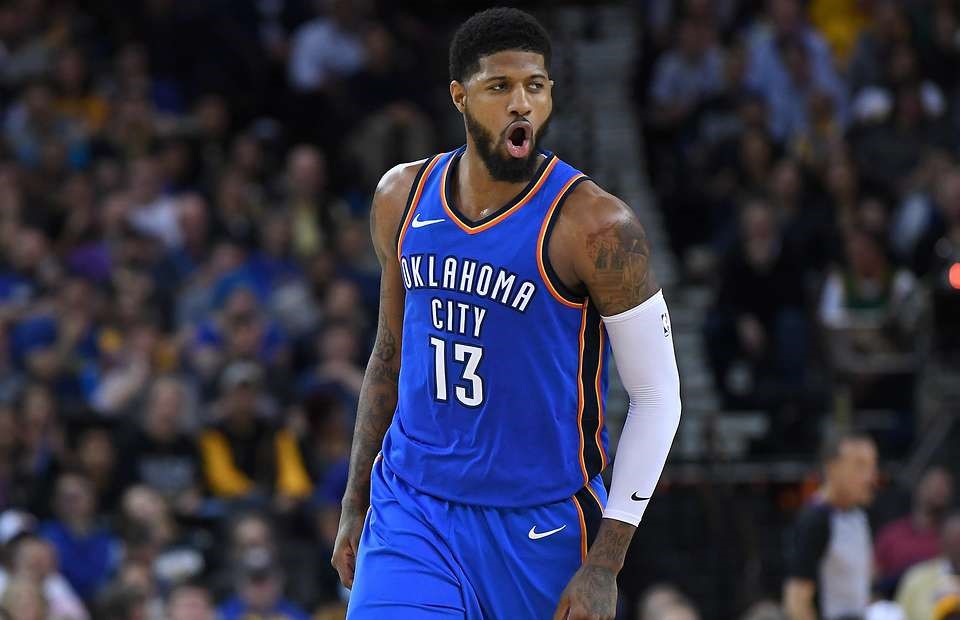 Sorry Lakers fans, this isn’t the first big news you wanted to hear from the NBA Free Agency market. But it is what it is. Paul George has chosen to remain as a member of the Oklahoma City Thunder, for now.

As free agency began at 12:01 am on July 1, 2018, the ESPN’s Adrian Wojnarowski reported that George has agreed to a four year deal max contract worth $137M to stay in Oklahoma City. The fourth year of the deal is reported to be a player option. 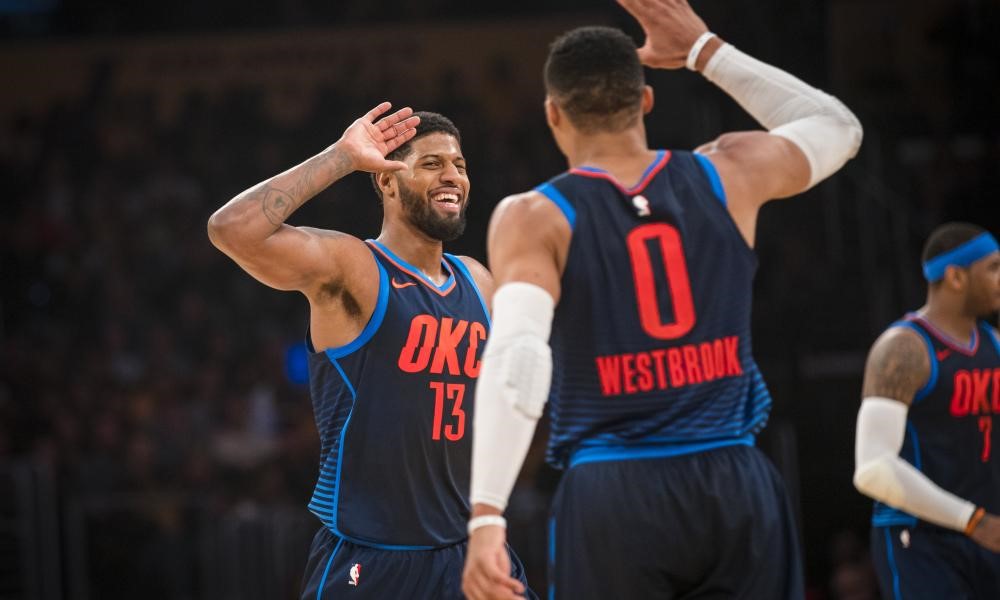 George made the announcement at a house party in Oklahoma City hosted by Thunder guard Russell Westbrook on Saturday night. The event, described as a ‘summer hype house party’ was held at a private property in Lake Arcadia. Westbrook had invited 500 guests who were required to sign a non-disclosure agreement. Multi-platinum rap artist Nas delivered a surprise performance during the party.

The intention of the party is unknown although its timing seemed to match with the opening of the NBA free agency period. George arrived in Oklahoma City on Saturday night. He proceeded to join and the event and without taking any free agency meetings, he announced his decision to stay with the Thunder.

Thunder GM Sam Presti, the man responsible for bringing George and Carmelo Anthony to OKC last season, revealed that the Thunder and George’s representatives have been in constant communication since the end of the 2017-18 season and that the discussions had positive results. George’s announcement comes at a time when many people believed that he would take his act to his hometown Los Angeles Lakers. Instead, George joins Westbrook as the cornerstone of the Oklahoma City Thunder for years to come. 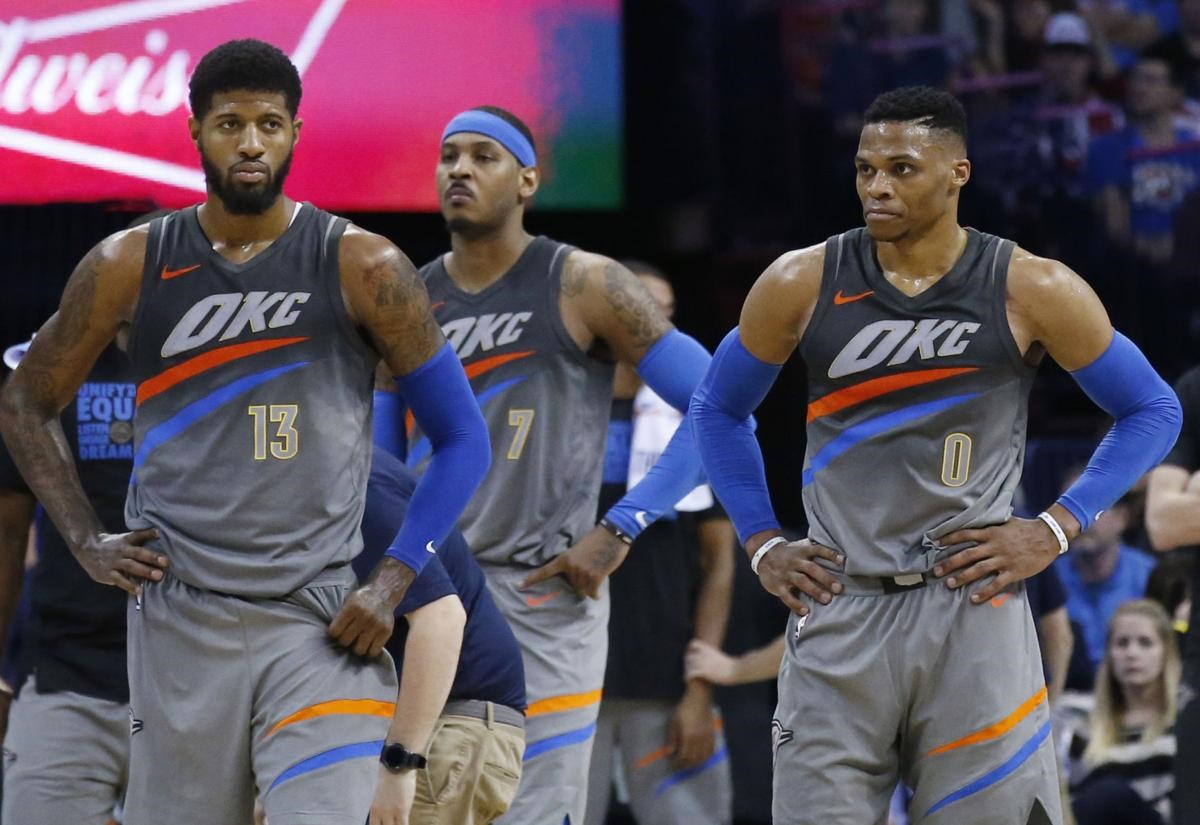 George took to Instagram to post a photo of him with Russell Westbrook with the caption ‘ Unfinished business @russwest44, an obvious reference to what the order of business for the OKC Thunder would be for next season. With George, Westbrook and Carmelo Anthony leading the charge, the Thunder finished the 2017-18 season with a 48-34 record to take 4th spot in the NBA’s ultra tough Western Conference. But the Thunder got ambushed by the upstart Utah Jazz in round one of the playoffs. Despite having a powerhouse trio, the Thunder were eliminated by the Jazz in six games.

OKC’s failure to advance to the second round of the playoffs was seen as a motive for George to leave Oklahoma City. Even before he was traded to the Thunder, George made it known that he wanted to play for his hometown Los Angeles Lakers. But when he arrived in OKC, George told reporters that if they accomplished something special in OKC, he might consider staying there for good. But with the Thunder getting eliminated in round one of the 2018 playoffs, many believed that George didn’t meet the criterion he himself set and so when he announced last week that he was opting out of his contract, a lot of people believed he was leaving Oklahoma City.

But as it appears right now, George didn’t really want to leave. He just wanted to get paid. The reason we say that is because he didn’t hold any free agent meetings with the Lakers or with any other team prior to committing to the Thunder. Instead, he returned to Oklahoma City on the eve of free agency and then announced that he would be staying.
Regardless, it is a victory for the Thunder, who made a huge gamble by trading for George last season without the guarantee that he would stay for at least another year. OKC gave up Victor Oladipo and Domantas Sabonis in that trade and Oladipo is now a full fledged all-star in Indiana. OKC clearly lost that trade had George decided to walk away. Now Sam Presti looks like a genius once again for being able to steal George away from the Lakers. Now the Thunder must plot their strategy to oust the defending champions Golden State Warriors, who walked away with the 2018 NBA title by sweeping the Cleveland Cavaliers. 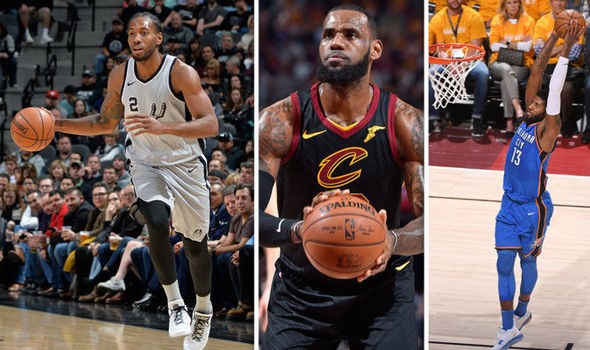 With the LeBron James and Paul George tandem now officially off, all eyes are now on what LeBron James is going to do with his free agency. Like George, James opted out of the player option of his contract last week and has become an unrestricted free agent. But unlike George who made the decision at the start of the free agency period, James’ next move is as good as anybody’s guess.

There were rumors last week that James would not commit to the Lakers unless there would be a second max free agent who would join him there. Some people think that was a weak move on the part of LeBron James but given the success that he’s had throughout his career and given the success ( or the lack of ) that the Lakers has had in the last couple of seasons, it would be a suicide for James to join a team on a rebuild. Having another max superstar would boost the Lakers chances of getting to the playoffs or even contending for the title. Without a second star, LeBron would be all alone trying to will a young team to victory.

But with George now out of the equation, the Lakers’ focus has reportedly shifted to New Orleans Pelicans all-star center DeMarcus Cousins, who is also a free agent this summer. But unlike George who was coming off a spectacular season in OKC, Cousins is currently recuperating from a season ending achilles injury which he suffered last season. There are no serious talks about Cousins not returning to New Orleans. And with the Pelicans enjoying playoff success without him, he might want to give ‘big ball’ another shot. Cousins will still have Anthony Davis, Jrue Holiday and Nikola Mirotic waiting for him if he decides to return. If healthy, that team could be a force to be reckoned with in the West.

The Lakers are also supposedly having talks with Kawhi Leonard, who has declared that he wants out of San Antonio. Initially, the rumors said that the talks between San Antonio and Los Angeles had failed. But with the rumor that LeBron James needed another superstar to commit before he joins the Lakers, Magic Johnson and Rob Pelinka are supposedly burning the telephone lines as we speak. With Paul George spurning them, the Lakers may be more hard pressed than ever to trade for Leonard, else James might decide to stay home in Cleveland. But whatever happens to Los Angeles isn’t the Thunder’s concern right now. Their goal for this summer has been accomplished. Now it’s time to go to work and find a way to stop the Warriors’ juggernaut.