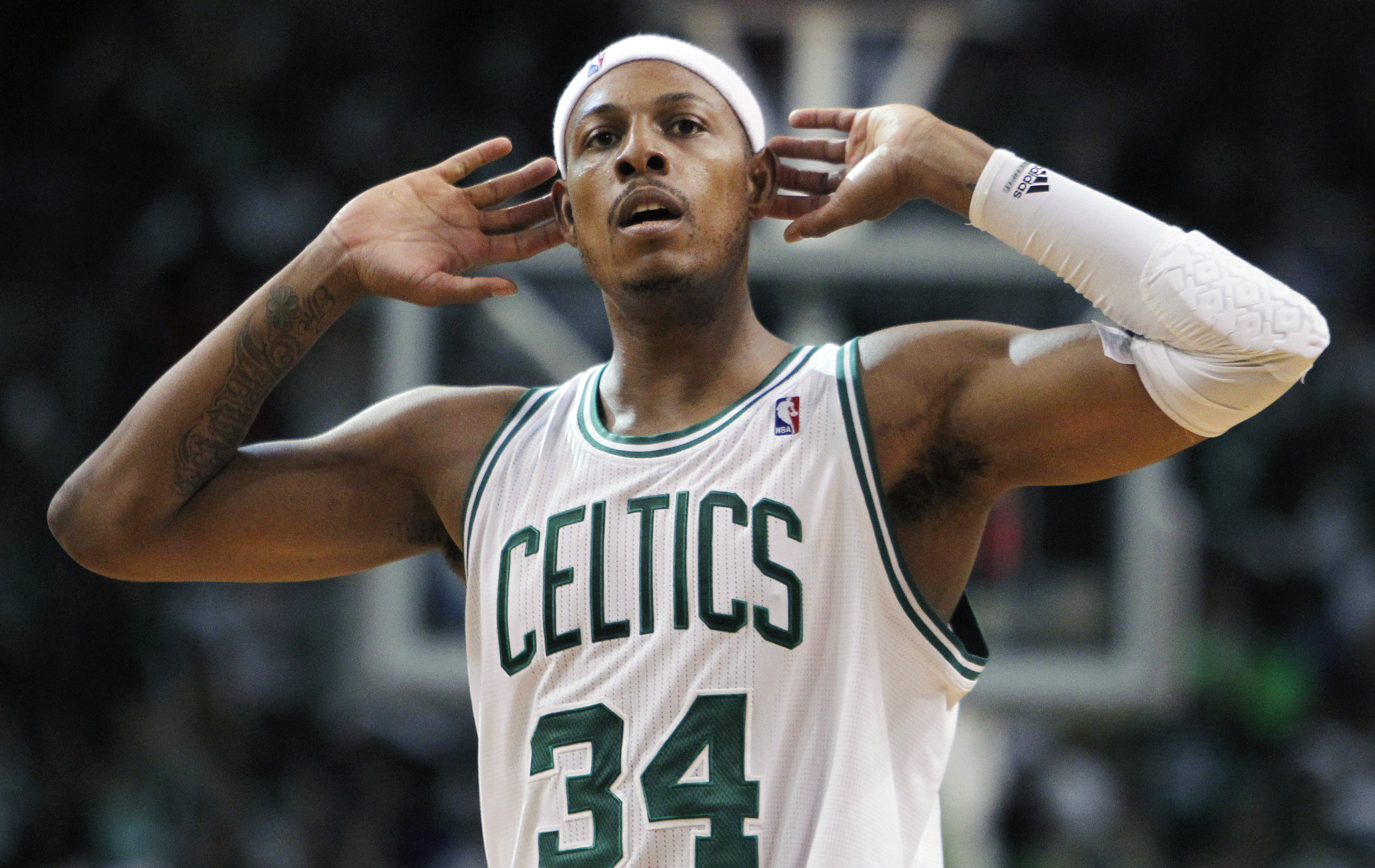 Paul Pierce Gets Storybook Ending And Retires As A Celtic

There are NBA superstars who finish their careers in the team that made them legends. Good for them. But there are some NBA legends who finished their careers away from the teams they built their legacies in. That’s a sad truth in an economics driven league like the NBA. Paul Pierce is unique. He played his final NBA game far away from the team he led and bled with. Yet he gets a chance to retire as a member of the family he never really left behind.

Pierce was the staple for the Boston Celtics in the late 90’s and the first decade of 2000. He symbolized everything that the Celtics stood for: pride, honor and competitive fire. He was born in California, grew up watching the Lakers but ended up playing for their rivals in Boston and even helping the Celtics beat the Lakers in the 2008 NBA Finals. But his fairy tale playing career didn’t end in Boston.

The Celtics traded Pierce and Kevin Garnett to the Brooklyn Nets in 2013. But Boston's long-time equipment manager John Connor always believed that Pierce would return again. So Connor kept an unworn pair of Pierce's custom made size 15 Nikes at the TD Garden and another pair at the team's Waltham training facility, hoping one day that Pierce is going to use them again.

One July 17, 2017, Paul Pierce signed a contract with Boston so that he could officially retire as a Celtic. After signing the contract, Pierce went to the Celtics' practice facility for one final shooting session. He dressed himself in Boston’s practice gear and put on one of the pair of shoes that John Connor kept. The Celtics posted the event on their Twitter account

Paul Pierce will retire in green ☘

"It's an honor to have this opportunity to once again call myself a Boston Celtic," Paul Pierce said in a press release. "The organization and city took me in and made me one of their own, and I couldn't imagine ending my career any other way. I'm a Celtic for life."

Pierce played his first 15 seasons with Boston, the team which picked him 10th in the 1998 NBA draft. Only John Havlicek played more years than him ( 16 ) in a Celtics uniform. During his stay in Boston, Pierce became its captain and its first bonafide superstar in the post-Larry Bird era. Pierce carried the Celtics on his shoulders for nine seasons, before the franchise signed Kevin Garnett and Ray Allen to form the “Big Three” which led them to the NBA title in 2008.

Pierce’s name is etched in Boston’s all-time leaderboard. He is the franchise’s all-time leader in three point field goals made ( 1,823 ) , free throws ( 6,434 ) and steals (1,583 ). Pierce is also the 2nd all-time leading scorer in Celtics history with 24,021 career points. Only Havlicek and Larry Bird are the other Celtics’ greats to score at least 20,000 points in the green and white uniform.

What made Pierce standout and what endeared him to the Boston faithful was his knack for coming up big in the playoffs. The Celtics made the playoffs in 10 of Pierce’s 15 seasons with Pierce averaging 20 or more points in six of those postseason runs. Pierce played in a total of 136 playoff games, the 7th most in Celtics history. Pierce also is Boston’s 5th best all-time playoff scorer with a career total of 2,843 points.

In his first NBA Finals appearance, Pierce averaged 21.8 points, 4.5 rebounds and 6.3 assists to lead the Celtics to a 4-2 win over their rival Los Angeles Lakers. Pierce would go on to be named as the Finals MVP as Boston won their NBA record 17th NBA championship and first since the Larry Bird era. Who could ever forget Paul Pierce getting carried off the court with an injury and coming back minutes later to spark the Celtics in Game 1 of the 2008 NBA Finals? That gutsy performance was typical Pierce. Pierce was fierce.

Pierce would go on to play for the Brooklyn Nets, Washington Wizards and then the L.A. Clippers for his final four NBA seasons. But despite leaving, Boston fans always treated him as part of the Celtics’ family. There was evident during Pierce’s farewell game at the TD Garden during the 2016-17 season.

Clippers coach Doc Rivers, who was Pierce’s coach in Boston, decided to start Pierce so that he could be acknowledged by the Boston crowd. When Pierce was introduced, it became a celebration:

Then in an emotional moment that summed it all, Pierce kissed the Celtics logo at midcourt:

The TD Garden erupted one more time when Pierce made his final shot, his only points in the game:

The final shot couldn’t have been more fitting. Paul made a killing hitting three pointers for the Celtics. But the storybook ending wouldn’t have been complete had Pierce retired in another uniform. Pierce said that the 2016-17 would be his last. He also said he wished he could retire as a Celtics. Now the Boston franchise granted him his wish and gave their fans the appropriate ending to one of the most legendary careers in Celtics folklore.

“We’re honored that Paul has chosen to retire as a Celtic. He is among the very best Celtics – a champion on and off the court,” said Celtics owner Wyc Grousbeck. “We congratulate Paul on a Hall of Fame career, and look forward to seeing his number raised to the rafters of TD Garden.”

Paul Pierce lived out his best moments in a Boston Celtics uniform. Now he gets to ride into the sunset wearing one. He may have worn other colors in his final four NBA seasons but Paul Pierce always bled green.