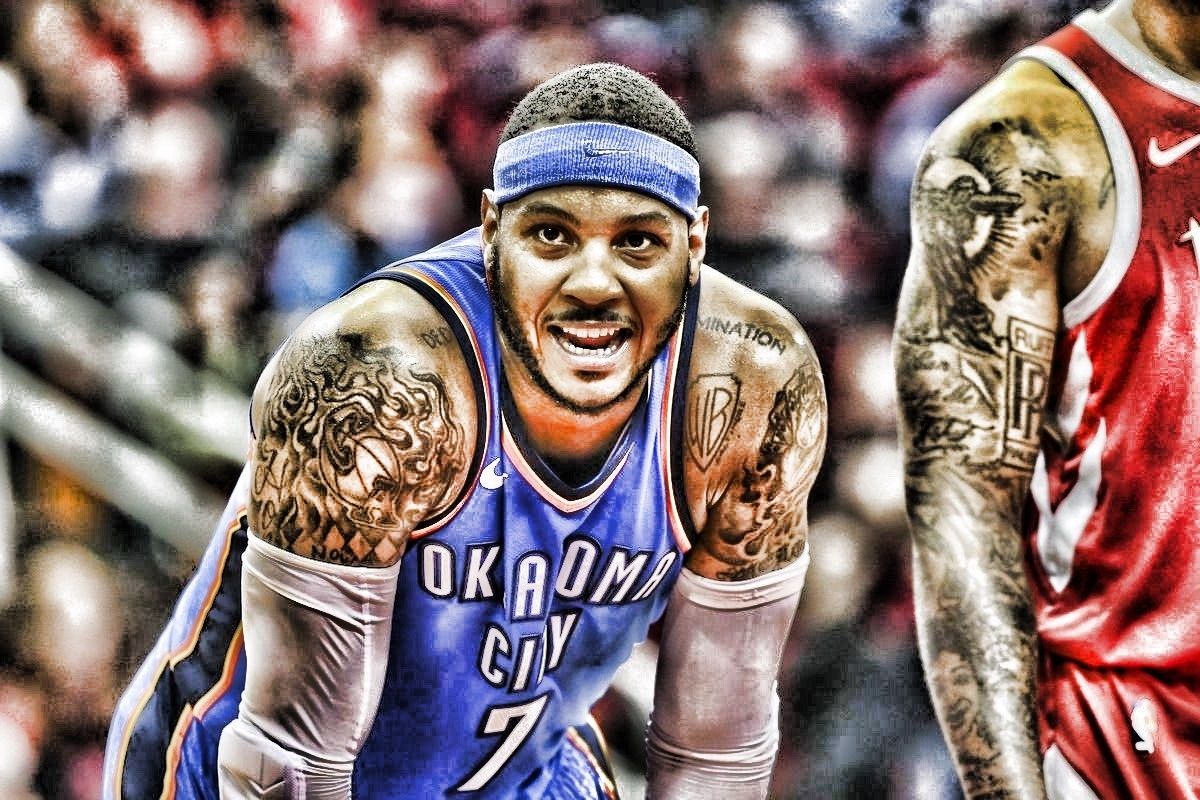 Playoff Contenders that Should Make a Move for Carmelo Anthony

James Harden’s out-of-this-world level of performance since December has been nothing short of spectacular. His has been averaging more than 40 points in this incredible run, on top of his significant production in rebounds and assists. However, it also exposes how undermanned the Houston Rockets are. All-Star point guard Chris Paul and rising star center Clint Capela have been sidelined by injuries, prompting the Rockets to increase Harden’s usage and rely on him to produce these stellar numbers.

Lost in all these Harden spectacles is Carmelo Anthony. With the Rockets needing another prime time scorer to help the team take some load off Harden, you would think that they could have used the services of Anthony. But it appears that the problem may be more than Carmelo’s awkward fit with the team as the Houston front office traded away the 34-year old All-Star to the Chicago Bulls just a couple of days ago.

Still, one could argue that Carmelo isn’t entirely washed up. It may be that he needs a more receptive environment for his skill set to be effective on the court. With the Bulls already decided that they will not play Anthony and either trade him or buy him out if trade negotiations fall through, let’s explore the playoff contenders on each conference who should try to make a move on the 10-time All-Star.

Ben Simmons. Joel Embiid. Jimmy Butler. Three bona fide, versatile All-Star caliber players in one team. It’s not too long ago that the Sixers were fielding in the likes of Henry Sims, Isaiah Canaan and K.J. McDaniels in their starting line-up. Now, they are sitting in the fourth spot in the East, sporting a 32-17 record. Yet, they’re still perceived as playing below expectations this season, an obvious indication of how they have grown and become one of the elite teams in the NBA.

But we have this notion that the Sixers are still missing a piece of their puzzle. Beyond their starting five, Philadelphia doesn’t have much depth on its bench. We’re still not sure if Markelle Fultz will play, and we don’t know the extent of Butler’s recent health issues forcing him to miss some games. Veteran small forward Wilson Chandler, their offseason free agent acquisition, hasn’t played as well as he did over the years and maybe his injury setbacks in the past could have taken its toll on his body.

The Sixers could use another scorer, someone who could come off the bench and produce points in bunches. Carmelo could fit the bill on this. At this point, Melo should not bother complaining if he comes off the bench. Another solid shot at the elusive championship could be what Anthony needs for him to forget about his ego, and just try to fit in with his new team. Simmons is a premier passer, Butler is a spectacular penetrator, and Embiid has one of the best inside-outside game among the big men in the league. Carmelo doesn’t have to demand the ball in this team. Just stand in the corner, run the trailer in transition, and he will get his touches on offense.

We never expected this from the Nets before the start of the season. They don’t have a seasoned All-Star on their team, and their best player is D’Angelo Russell, that former Los Angeles Laker dud who was traded away by Magic Johnson because he doesn’t have what it takes to be a leader. Yet, they have climbed all the way from the bottom to the 6th spot in the East, ahead of more talented teams like the Pistons or the Wizards.

Head coach Kenny Atkinson, arguably a leading candidate for the Coach of the Year award, has done a brilliant job in motivating his young players to play a disciplined approach on both ends of the floor. But they still have gaping holes on the roster, particularly in the wing position. Their small forwards, Allen Crabbe, Jared Dudley and Rondae Hollis-Jefferson, are all nursing injuries that should keep them out at least a week. Caris LeVert, one of their leading scorers, is still out with the right foot injury that sidelined him early in the season.

If they want to make some noise in the postseason, they need another go-to-scorer other than Russell and Spencer Dinwiddie. Enter Carmelo Anthony, and they have a proven bucket getter who will not wilt in the clutch. May it be just a half-season rental or an opportunity for Carmelo to send a message that he is not done yet, this move would be a surefire win-win for both sides.

Don’t get me wrong, signing Carmelo shouldn’t be the Hornets’ priority before the February trade deadline. They need to make a blockbuster move right now, considering that Kemba Walker will be an unrestricted free agent in the summer. Targeting big names on the trading block like Marc Gasol should be something that Charlotte could look into. They also need to move bloated contract in their roster like Nicolas Batum’s should they desire to go big in the stacked 2019 free agency class.

If the Hornets front office goes the other way and stands pat on the deadline, they should have no business in acquiring Anthony. They are already clogged on the wing position with Batum, Miles Bridges, Michael Kidd-Gilchrist and Jeremy Lamb already sharing minutes. But if the team offers the Grizzlies a possible package that could include Batum and Bridges for the services of Gasol, then targeting another All-Star in Carmelo should be the Hornets’ next move.

Acquiring Gasol and Anthony won’t necessarily put the Hornets on elite status. But it will the right step moving forward, and a message to Kemba that Charlotte is intent on building a contending team in the East.

The Blazers, with Damian Lillard and CJ McCollum leading the way, have been in the playoff mix consistently every year. But it should be frustrating for them not to make significant success in the postseason time and time again, and this might be the year that they need to consider breaking up the core of the team. While McCollum has certainly grown as a ball-handler, he hasn’t been as effective as last year. Evan Turner and Maurice Harkless are still horrible three-point shooters, and the only player outside of Lillard and McCollum who is averaging double-digits in scoring is center Jusuf Nurkic.

Whether they move McCollum or Nurkic before the trade deadline or not, the Blazers certainly need a scoring upgrade on the combo forward position, and Anthony should be a leading candidate for that role. Melo will get his open looks, especially with Lillard and McCollum attracting a lot of attention from the defense. Furthermore, Anthony can spearhead and improve one of the worst bench units in the league.

With LeBron James and Rajon Rondo missing extended periods of time due to injuries, the Lakers have suddenly fallen out of the playoff race, looking outside in the 9th spot. Could an acquisition of Carmelo Anthony solve the Lakers’ problems? No, not at all. Just like the Hornets, Carmelo doesn’t have a place in the Lakers’ rotation if the current roster doesn’t change before the trade deadline.

But should the Lakers explore the trade market and put some of their players on the trading blocks, their best assets lie at the perimeter position. It’s difficult to imagine the Lakers to trade Kyle Kuzma, but there are rumors that Brandon Ingram and Josh Hart could be the most possible players that Magic Johnson could include in a trade for an All-Star name.

If that happens, the Lakers will suddenly look bleak on perimeter depth, potentially opening up a spot for Anthony to take his talents to Los Angeles. The fact that LeBron, one of his closest friends, has been up-and-arms in saying that Anthony can still play at a high level could be an indicator that the organization will probably consider bringing the 34-year old veteran to the mix.

Despite the team’s below-average performance this season and the pressure of Anthony Davis’ impending free agency in 2020, the Pelicans front office has been adamant in keeping AD with the belief that they could still surround him with a championship-ready roster. So far, they haven’t achieved much success in this mission, and time is running out for them before Davis completely loses his patience and demands a trade to an elite team.

The signing of Julius Randle last offseason has proven to be a right gamble for the organization as he has been a consistent double-double machine this season and an outstanding frontcourt partner for Davis. Point guard Jrue Holiday is still steady as ever, and Nikola Mirotic is causing mismatches on offense with his ability to shoot the ball from deep as a stretch four. But the Pelicans lack some firepower on the small forward position, a role that is currently played by unproven players like Darius Miller, Solomon Hill and Wesley Johnson. Reports have it that the team is pursuing Terrence Ross of the Orlando Magic, and Chicago Bulls’ Jabari Parker, but the conversations are still yet to escalate to negotiations.

New Orleans could certainly use the services of Carmelo for the small forward position, a role that the All-Star has played most in his career. With the Pelicans, Melo should have the biggest chance to play greater minutes among the teams previously mentioned in this list. He could start for the team right away, with head coach Alvin Gentry staggering his minutes and letting him lead the bench unit in the second quarter. With Holiday and Davis already clamping on the defensive end and negating Carmelo’s primary weakness, there shouldn’t be a glaring chemistry issue if Melo joins New Orleans.