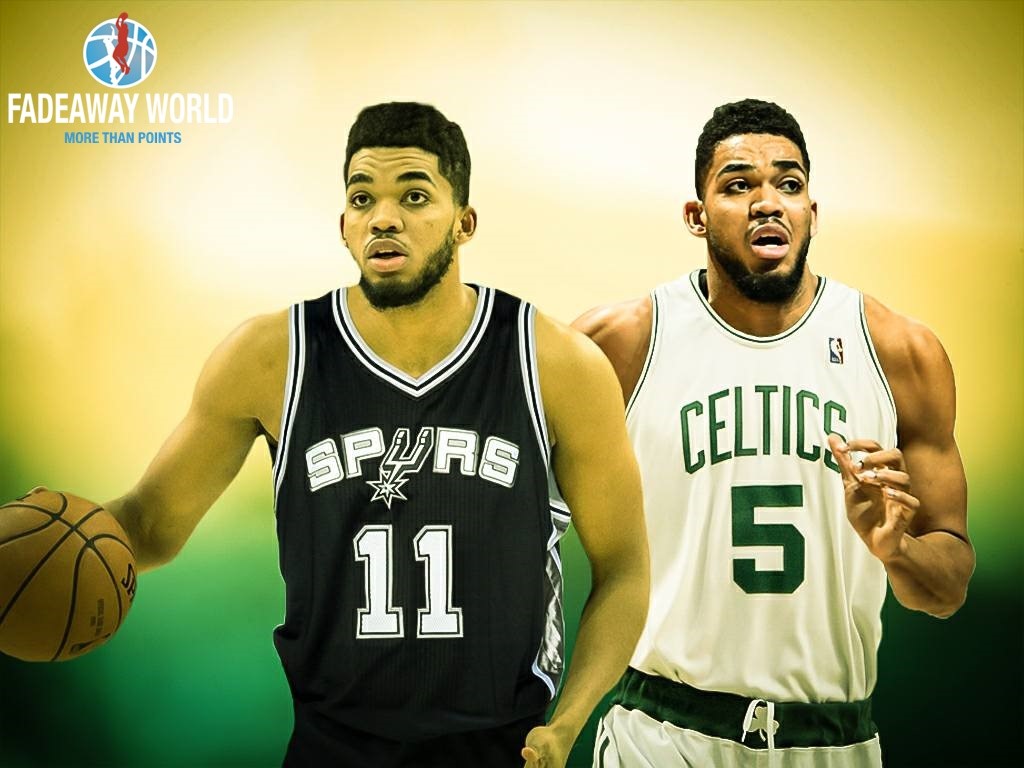 For the past two seasons, Karl Anthony Towns was voted by NBA GMs as the player they would build a new franchise around. That didn’t come as a surprise as the #1 pick of the 2015 Draft has been one of the most dominant and unique talents we’ve ever seen in the league.

The 2016 NBA Rookie of the Year has averaged at least 20 points and 12 rebounds in the last two seasons. But what makes Towns different from most centers is that he can hit the three point shot like a guard. Towns is a career .387 shooter from behind the three point line and this past season, he shot 42.1% from downtown. In fact, Towns was one of only three players this season to shoot 40% from the three point area and average 1 block per game.

Given Towns’ talent and potentials plus the fact that every other team wants him, there is no way that he should be traded. But after ESPN’s Zach Lowe recently said that Towns and the Wolves ‘aren’t in a good place internally’ and Brian Windhorst opining that ‘Anthony Davis isn’t going anywhere soon but Karl Anthony Towns is another story’, the rumors are now saying that the Wolves may be willing to part with their 21 year old unicorn soon.

Having head that, let’s take a look at the potential trade packages that the other NBA teams might want to offer to the Minnesota Timberwolves in exchange for Karl Anthony Towns:

The Chicago Bulls are in a rebuild mode and there is no better way to start one with getting the franchise cornerstone first. No question Karl Anthony Towns fits the bill. Chicago doesn’t have a high quality big man right now and perhaps they haven’t had a chance to have a player like Towns in Chi-town in a long time. Even during Michael Jordan’s glory years, they never had such a dominant big man.

Chicago owns the 7th pick in the 2018 NBA Draft and it’s a no-brainer that the pick should be included in a package for Towns. But we know that a draft pick - no matter how high, may be enough to compensate for KAT. So the Bulls must give up some valuable assets to do acquire Towns in a potential trade.

The centerpiece of the deal should be Lauri Markkanen who had an excellent rookie season for the Bulls. Now trading Markkanen might sound like a bad move considering his upside. But hey, Karl Anthony Towns is a unicorn. To get one, you must pay the price. Giving up a couple more starter in Bobby Portis and Kris Dunn would sweeten the deal.

The Philadelphia 76ers had a good run during the 2017-18 NBA season. But in the playoffs, they came up short after getting ambushed by the Boston Celtics. After their elimination, coach Brett Brown admitted that his team is one ‘high-level free agent’ away from title contention and he may be correct.

Joel Embiid may be one of the top five centers in the NBA right now, top three even. So why would the Sixers need another high level big man? For sure, KAT is a center but being a unicorn, he can stretch the floor with his outside game. Given Towns’ ability to shoot the three and Embiid’s willingness to take the outside shot, this twin towers combination has what it takes to make it work.

The Sixers would have to part with the 10th pick of the 2018 draft as well as Markelle Fultz, last year’s top pick, who struggled with injuries and a bad shot during his rookie season. But Fultz came back healthy towards the end of the year and given an offseason to work out, he should be back to being the player he was before last year’s draft. Richaun Holmes should be the sweetener here for the Sixers.

The Los Angeles Lakers had one of their most promising seasons in years. Although they missed the playoffs again, there were enough positives to look forward to the coming years. The Lakers are expected to splurge in the free agent market and are rumored to make a run for LeBron James and Paul George.

But getting James and George together isn’t a sure thing. Getting one isn’t even a done deal. So instead of going for two max free agents, the Lakers can just go for one and then trade for another. Trading though would mean giving away several of their young talents because they don’t have draft picks to dangle. But in Towns, the Lakers would be getting a 21 year old.

Brandon Ingram is their best asset so he should be a part of this deal. Kyle Kuzma and Josh Hart should sweeten the deal. Adding scorers like Kuzma and Hart to a team that already has Jimmy Butler and Andrew Wiggins may not sound well. But the Wolves can figure that out later. They could end up trading pieces again to get the ones they need. But adding Ingram would be the key here. He’s a sure fire all-star in a couple of years and is the kind of player they don’t have on their team.

OK so the Spurs are attempting to mend fences with their reported willingness to offer Kawhi Leonard a super max deal. But whatever was going on between Leonard and the Spurs last season, we will never know. And we don’t know if he still wants to play for the Spurs again.

Having said that, trading Leonard would be an option but for the Spurs to give him up, they must get another franchise player in return. That’s a tough deal to make. But if the Wolves are serious about moving KAT, talking to San Antonio would be one of the best deals to make.

Towns being coached by Gregg Popovich would be huge for KAT’s career. Pop’s history with David Robinson, Tim Duncan and now LaMarcus Aldridge is legendary. Because Kawhi is owed much more, Minnesota must move a big contract along with KAT. Looking at the roster, it should be Gorgui Dieng who is owed for 4 more year and doesn’t seem to have much upside.

KAT And The Kings

The Sacramento Kings own the 2nd overall pick of the 2018 draft and if the Suns pick DeAndre Ayton, then they have the chance to draft European sensation Luka Doncic. But while this year’s draft class has plenty of franchise player materials, they are still unproven and that uncertainty makes Karl Anthony Towns more valuable than any of them.

Sacramento is looking for a player to build their franchise around, there is no better young stud out there than Karl Anthony Towns. Aside from giving up the 2nd pick of this year’s draft, the Wolves will demand more and Buddy Hield and Willie Cauley Stein should be acceptable to Minnesota.

Hield gives the worst three point shooting team in the league a boost while Cauley Stein is a center whom Tom Thibodeau can plug and play right away next season. Getting Ayton or Doncic at #2 should be an exciting prospect for the Wolves with the former providing Minnesota an inside presence and the latter giving them playmaking abilities. Either way, it’s a win win situation for the Wolves.

It would be hard for Phoenix to part ways with the #1 overall pick of the NBA Draft but given the opportunity to acquire a once in a lifetime talent like Karl Anthony Towns, it should be a no-brainer for the rebuilding Suns.

Josh Jackson and Marquese Chriss are future stars but in KAT, the future is already here. Towns is a 20-10 machine who has the ability to hit the three pointer. Devin Booker may be beginning to lose patience about not going to the playoffs and GM Ryan McDonough hinted about the possibility of accelerating the rebuild by trading the #1 pick. Outside Kawhi Leonard, Karl Anthony Towns is the best option.

Minnesota should accept the deal because not only will they be getting the #1 overall pick in this year’s draft, the Suns are sweetening it by adding last year’s 4th overall pick in Josh Jackson and Chriss who was the 8th overall pick in 2016. Is Phoenix giving up too much here? To get a unicorn, the answer is a big yes.

The Boston Celtics have done a tremendous job playing without Kyrie Irving and Gordon Hayward. What more when the two are set to return next season? Having seen them play this postseason, you might think that the Celtics are done with putting together their team and are now going to the next phase which is contending for the title. You could be wrong though as the rumors of Boston going after Anthony Davis just won’t die. But the Pelicans may not be willing to part ways with The Brow so the Celtics could look elsewhere.

Karl Anthony Towns may be the closest to Anthony Davis as the Celtics can find. In fact, some GMs may consider Towns to be a better prospect than Davis given he is younger and he has the better outside shot. Regardless, if Towns is available, Boston could be in play simply because they have the pieces to complete the deal.

Jaylen Brown may have become dispensable with Jayson Tatum’s rise.With Hayward set to return next year, Brown’s friendly contract is easier to move. Minnesota won’t agree on a one on one trade so Boston can use it’s arsenal of draft picks to make the Wolves agree. Adding two future picks- the 2019 first-round pick (top-one protected, via Kings or 76ers) and the 2019 first-round pick (lottery protected, via Clippers) should do the job.

KAT To Other Side of L.A.

The Clippers traded Blake Griffin during the 2017-18 season, ushering the start of a rebuild. With no player in the team possessing Griffin’s franchise player qualities, Karl Anthony Towns could be a good target for the Los Angeles Clippers.

DeAndre Jordan has been a target of trade rumors for a long time now. And perhaps, this is the deal where he could be moving out of Los Angeles. But because D.J. has an expensive contract, the Wolves must add value to KAT. The Clippers don’t have much to offer in their roster to sweeten the deal so Patrick Beverley could be added. If so, the Wolves can now give away Jeff Teague and his $19M annual salary to complete the Jordan deal.

Sam Dekker showed promise in Houston but wasn’t effective in Los Angeles. A change in scenery could unlock his full potentials. But getting DJ is the goal here. Jordan’s rebounding, inside presence and toughness are different from KAT’s skillset. With Thibodeau’s defensive approach, Jordan could be a good fit in Minnesota.

It’s unclear right now whether the rumors are true or not. But even if they are, the Wolves should work on resolving whatever issues they have rather than trading KAT. If the relationship isn’t a total wreck, then it’s still best to fix the car rather than buy a new one.

Towns is a proven commodity in the NBA and he is a rare one at that. A player like him doesn’t come along every year and it would be such a waste to lose him after just three seasons. Towns has the potential to be one of the greats, all he needs is some time to mature and grow as a player.

Minnesota already had a breakthrough season when they reached the playoffs for the first time since 2004. What they should do is build on that success by keeping the core that brought them there. And that included making Karl Anthony Towns happy rather than letting him go.