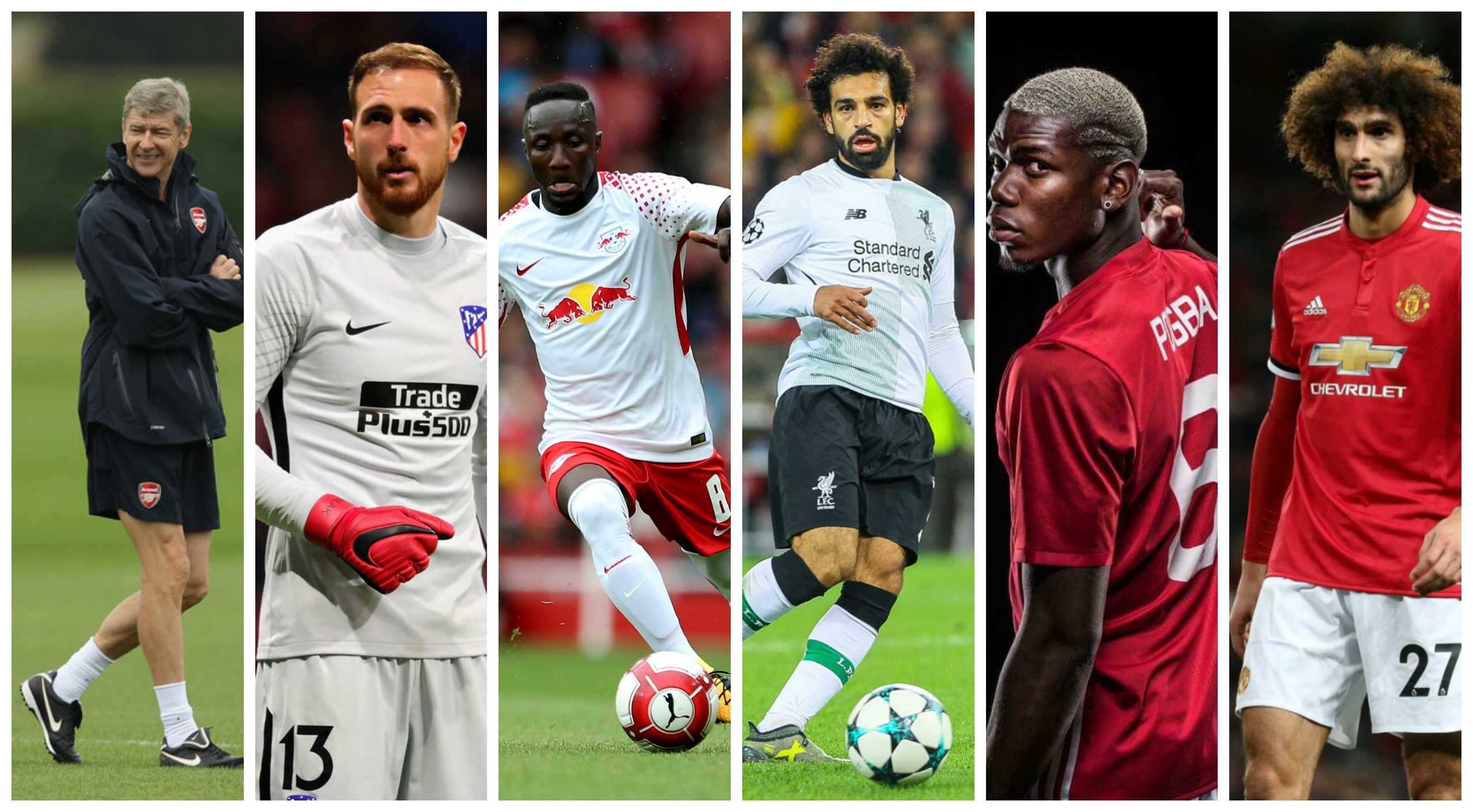 Premier League Biggest Transfers to Watch Out For

The 2017-18 Premier League is just a few weeks away from its culmination. Now, the top five teams are bracing themselves for the final matches ahead.

Manchester City stays atop as rival Man United trails them by 16 points. Liverpool hangs by a thread as Tottenham vows to dethrone them with their one-point difference. Meanwhile, Chelsea had accepted its fate after making it just to the top five.

The season might be through for most, but that doesn’t mean there’s no hope for the failed clubs next time. In fact, numerous transfer rumors have already surfaced, and most of them are downright surprising.

Here are some of the biggest transfers to watch out this coming summer.

Jose Mourinho’s men have been under tremendous pressure this season as they were heavily criticized for failing to remove the City from the top spot. It turns out that Mourinho isn’t sold out with these criticisms as he believes they’ve achieved a lot.

In an interview, the Portuguese said that the media kept on looking at their mistakes instead of acknowledging their accomplishments. They deserve praises from their fans as they maintained their top two position all-season-long. But what they get instead was a barrage of unending criticisms.

Because of this, the Reds feel like they haven't accomplished much this year. Alexis Sanchez might be at bay, and Paul Pogba’s midfield prowess are perfect recipes for finals-contention, but they still fall short. Why? Probably because of their teamwork.

30-year-old Marouane Fellaini doesn't want to play in a team like this. Having been through a lot throughout his 12-year-career, it would be easy for him to leave and play elsewhere. The Reds just don’t have enough firepower.

According to reports, Fellaini’s contract with Man United is expiring this summer. This would then be the perfect time for him to leave Old Trafford and transfer to another Premier League club. West Ham is among the clubs that are aggressively persuading the veteran to join them.

Unfortunately, the Hammers’ status in the league is pretty bad. Being in the 15th spot in the rankings, there’s no doubt that the midfielder will deny such offers. But then again, David Moyes is there. Moyes is Fellaini’s former manager during his time with Everton.

If ever Moyes manages to persuade him, then let’s expect him to play at the capital next season. But if not, then we’ll surely see him play overseas. Probably in La Liga or Ligue One?

Who knows? Being an elite midfielder who scored four goals out his four appearances this season, there’s no doubt that the top clubs in Europe will scramble to get him.

Then there’s Paul Pogba, the Frenchman who leads Man United's core. He's the go-to man for Mourinho’s tactical plays due to his innate genius in setting up drives and through balls. However, the Reds’ failed attempt to overthrow their rival is rumored to be the reason why he'd want to leave.

Having made a total of seven goals this season isn’t enough. And who could blame him? He’s only played 2,200 minutes — not enough for a player of his caliber. However, the 25-year-old debunked all transfer rumors as he said that he doesn’t have any problem with Jose Mourinho.

He even told the media that he’s focused on finishing the season on a high note. He’s currently playing for the club, and that's what matters most, he said. Thinking about the present might be Pogba’s current motto, but that could change soon once the season ends.

Pogba has so much potential but is still treated as subpar support for Fellaini, Lingard, and McTominay. Because of this, it makes sense for him to play for a club that’ll treat him in a more valuable manner.

Another interesting thing about his transfer rumors is that he mentioned in one interview that he’s getting a lot of offers from numerous clubs. Though he might snub all them for now, it’s likely that he’ll give them a second look this summer.

The Premier League remains as one of the best leagues to play top-tier football — the reason why Europe’s rising stars want to enter the league. One of those is Leipzig’s Naby Keita. Hailing all the way from Guinea, Keita is among the many youngsters who wish to play for a world-renowned club like Liverpool.

Luckily, he’s got what it takes to be one of the Reds. According to reports, Keita will be moving to Anfield in this summer’s transfer window. The two parties haven’t yet agreed on a price, but are expected to be coming to terms soon.

Keita will get the career break he's been waiting for once he makes it to Anfield. Jurgen Klopp will surely count on him for the club's long shots, and key passes especially that these are his specialties as an elite central midfielder.

Though the Guinean isn’t that good in aerial duels, Chamberlain, Can, and Lallana will be there to support him. Dribbling and ball interception are also one of his strengths — just what Klopp needs to bolster the team’s defense.

Regarding the transfer fee, it was reported that Liverpool must pay around £48 million if Leipzig makes it to the seventh spot or higher. The asking price then rises to £52 million if they qualify for the Europa League, and another £59 million if they make it to the Champions League.

The Egyptian phenomenon, Mo Salah, is Liverpool’s face of the game. He’s also the most popular Arab football player that’s why he’s a sought-after possession not only in England, but in Spain as well.

Reports said that Real Madrid is actively seeking out a new forward to improve their attacks. Having failed to dominate La Liga, it’s possible that they’re searching for a high-caliber addition to the team.

Mo’s status in Liverpool might look good, but reports said that he’s still considering transferring to another top-tier club. Zinedine Zidane has been reported to lose his job if Real Madrid fails to win this year’s trophy (which is impossible, knowing that Barcelona has the sure hold to the title).

With this, Zidane is likely to be replaced by a new manager. As to who that will be, we still don’t know. But one thing’s for sure, and that manager will surely seek out Mohamed Salah.

Zidane has been vocal in his interest to sign Chelsea's Eden Hazard this summer. However, Florentino Perez, president of Real Madrid, has a different plan as he intends to put Salah in Hazard’s place instead. Perez also said that the Egyptian would greatly help Cristiano Ronaldo's playmaking abilities in midfield and forward roles.

The Daily Express reported that Liverpool’s asking price for Salah is a massive £190 million. Though Real Madrid can surely afford that sum of money, the final decision still lies on Salah. Knowing that he’s got a close relationship with Jurgen Klopp and he intends to dominate the Premier League, it’s safe to say that he won’t move elsewhere.

That is if he still thinks that way in the next months to come.

We all know how the rivalry between Barcelona and Atletico Madrid turned out. The latter proved to be the better club as Atletico lied low on the second spot. Now that Barca has unofficially claimed the trophy, the best thing for Diego Simeone to do is to prepare for next season.

That’s good for some of their players. But for a player who’s geared up for stardomness, that’s unacceptable. Take for example Jan Oblak. In an interview, the 25-year-old said that he intends to leave El Pupas.

He’s still under contract until 2021, but a transfer clause can be made if he wants to. Paris Saint-Germain and Liverpool are two of the clubs actively seeking out the top gun.

Liverpool badly needs a support goalkeeper as Loris Karius, and Simon Mignolet’s performances aren’t that good compared to their previous season’s games. They’re also stuck in a rut as Tottenham is expected to overtake them from their current third spot position in the Premier League.

Their poor defensive game needs a serious upgrade, and Jan Oblak might be the guy they need. Then there’s the French Ligue One-dominating club, Paris Saint-Germain, who also needs additional defense.

Alphonse Areola and Kevin Trapp are doing pretty good, but Unai Emery feels like something is lacking. It doesn’t need a genius to figure out where PSG is weak at — their defense, specifically deep in their area. Putting Jan Oblak in the goal would help them cover up their weak spots.

That is, if he decides to play in France, a country known for very aggressive plays which is not what he’s used to doing.

Arsenal needs to brace themselves for the eventual departure of their much-loved manager, Arsene Wenger. This year’s Premier League hasn’t been too kind to them — probably the likeliest reason why the Frenchman would leave the Gunners.

Nonetheless, Wenger will get offers from all sides. He’s extraordinarily fit despite turning 69-years-old this October. Sports analysts also praise him for his very active mind and innate playmaking genius. Because of this, reports said that he'd get offers from Paris Saint-Germain, Real Madrid, and even England’s national team once the season ends.

Though these transfer rumors remain as rumors, it’s expected that some of them may still turn to reality once the summer transfer window starts. These will shift the balance of power in Europe’s major leagues. Next season will then be a fresh new start for all the clubs involved in the transfers.