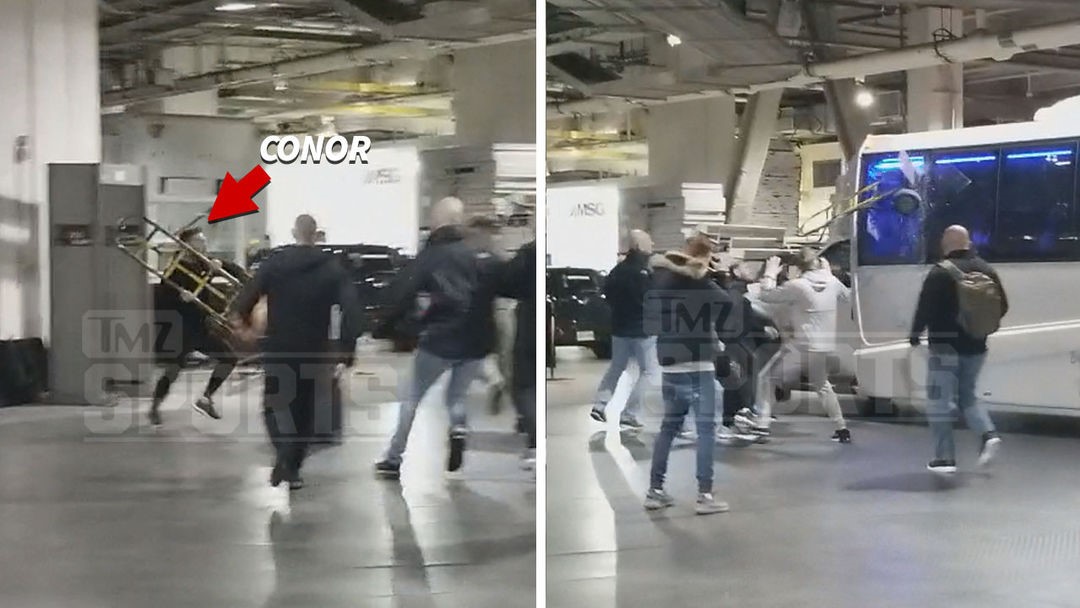 It has been a wild week for the UFC. First, UFC 223 headliner Tony Ferguson suffered a bizarre injury six days before the fight and had to be removed from the event. The UFC replaced him with Max Holloway. Then two days before the fight, Conor McGregor created a scene at a UFC media event when he attacked a bus full of UFC fighters. Three fights had to be scratched from UFC 223 as a result of the incident.

If those weren’t enough, the New York State Athletic Commission declared Holloway medically unfit to fight ( without even checking him ) and the UFC had to replace Holloway with Al Iaquinta. Iaquinta couldn’t make weight and was 0.2 pounds above the 155 pound limit and the NYSAC declared that only Khabib Nurmagomedov can win the UFC lightweight title on Saturday night. Dana White went on record to say that if Iaquinta wins, he will still be the new lightweight champion despite the commission’s decision.

Going back to McGregor though. While the UFC scrambled to save UFC 223, McGregor was busy saving his ass from being imprisoned. He is a free man, for now, but will still have future dates with the court to determine what his punishment will be.

What happened at the UFC 223 media event on Thursday?

Why did Conor McGregor do it?

According to UFC President Dana White, McGregor was after Khabib Nurmagomedov, who will be fighting in the main event of UFC 223. Nurmagomedov and Artem Lobov, a Russian training partner of McGregor, got into a heated altercation at the hotel the fighters are staying earlier this week.

Neither fighter gave media any details about their conversation ( it was videotaped buth both were speaking Russian ) but after the incident, Lobov had to be transferred to another hotel for his safety because he reportedly got threats via telephone.

When McGregor reportedly heard about this incident, he loaded up a private jet with guys from Ireland, flew to New York and coordinated the attack at the Barclays Center.

How did McGregor enter the venue?

As we said earlier, McGregor was uninvited to the event. In fact, he wasn’t supposed to be in New York. But because of the Khabib-Lobov situation, he flew in at the spur of the moment.

If nobody expected that McGregor would show up at the event, nobody also expected his journalists to aid him in committing the crime.

Who got hurt during the incident?

UFC lightweight Michael Chiesa, who was supposed to fight former UFC lightweight champion Anthony Pettis in the undercards was taken to a hospital after suffering facial lacerations as a result of the incident.

UFC featherweight Ray Borg was also injured in the incident. Borg, who was supposed to fight Brandon Moreno in the undercards too, initially complained of vision problems which were probably a result of the debris from the glass window which McGregor smashed. He was also taken to a hospital and was diagnosed to have multiple corneal abrasions.

McGregor is also accused of throwing a punch at security detail Jason Ledbetter. Ledbetter was also treated at a local hospital for minor injuries. Aside from Chiesa, Borg and Ledbetter, there were two other people included in the protection order issued against McGregor. These are Ozzy Arias and Ricardo Chico. Presumably, these two were also hurt during the incident as protection orders are awarded to victims of assault charges.

McGregor turned himself in to Police at the 78th Precinct in Brooklyn on Thursday night, 10:23 pm New York time, after which the preliminary investigation bega. McGregor was kept their overnight and he was seen leaving the police station at around 10 a.m. the following day. A handcuffed McGregor was driven by police to the Kings County Criminal Court where he was arraigned at around 4pm local time. McGregor’s case was heard by Judge Consuelo Mallarfe-Melendez.

What was he Charged With?

A bond of $50,000 was set for McGregor and $25,000 for Cowley. They were bailed out by celebrity bail bonsman Ira Judelson. Judelson is known as the bondsman of the stars because of his work with high profile stars like rapper Ja Rule, actress Lindsay Lohan, NFL great Lawrence Taylor and IMF head Dominique Strauss - Kahn.

It was reported that Jiu Jitsu expert and Bellator MMA fighter Dillon Danis, who was present at the arraignment, paid for McGregor’s bail. Danis and McGregor trained together in the past with Danis helping Notorious with his BJJ and McGregor allowing Danis to train with his team at SBG Ireland.

McGregor and Cowley were permitted to get back their passports so they could travel and work but were required to report to Judelson once a week. Likewise, any travel by both McGregor and Cowley had to be pre-approved with their bondsman. Both accused are scheduled to return to court on April 14, 2018.

If convicted, what happens to Conor McGregor?

Each assault charge carries a maximum imprisonment of one year. However, criminal mischief is a felony act and it could land McGregor a seven year imprisonment. There have been incidents where people accused of the same crime have been imprisoned but sources say that ‘every case is treated differently’. And since Conor McGregor does not have a criminal record in the state of New York, there is a good possibility that he will avoid jail time but will be required to pay damages to the parties concerned.

Will he fight in the UFC again?

At first UFC President Dana White said that he doesn’t want the UFC to have a working relationship with McGregor for the time being. He also said that by the time everything is over, McGregor will be a convicted felon and it’s no longer going to be about whether McGregor fights again in the UFC.

He also said that McGregor isn’t going to get his help this time around:

"He came into the Barclays Center, attacked our fighters and attacked my staff," White said on ESPN. "No, you don't get my help on this one."

But then of course, McGregor is the UFC’s biggest star. He lives with his own set of rules. He’s been on the wrong side of the law several times in the past but White has let him get away unscathed. So we’ll never know. And yeah, Dana White is full of lies. He’s always been.