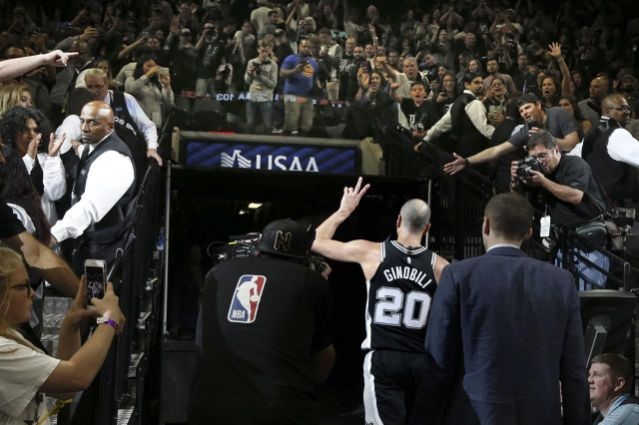 Remembering Manu Ginobili With The Top 5 Plays Of His Career

So our question has been answered. Manu Ginobili has chosen to retire from the NBA after 16 seasons.

Some remember Ginobili as one of the Spurs’ Big 3 which led the franchise to four NBA titles. Others remember him as the complimentary player of that trio or San Antonio’s ever reliable sixth man for nearly two decades. But while Manu Ginobili is all of those, he was also a special player who thrived in the clutch and delivered one big basket after another.

We picked out five plays from Ginobili’s basketball career that stood out as his best. Here they are in chronological order:

1. The Game 5 block on James Harden 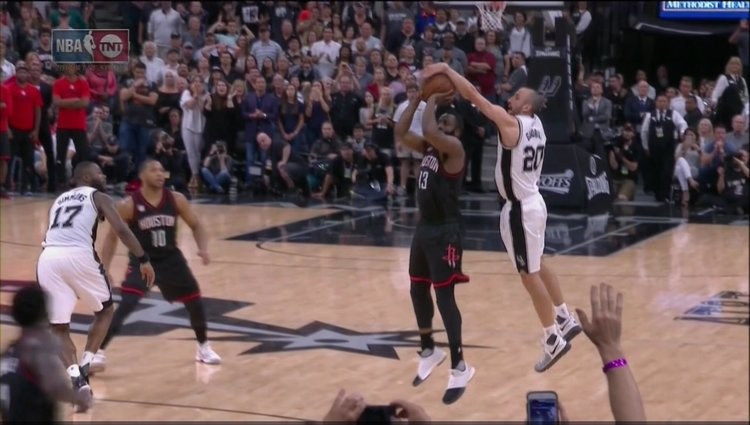 With their 2017 Western Conference semifinal series against the Houston Rockets tied at two games a piece and the Spurs clinging on to a precarious 110-107 lead in overtime, Ginobili came up with a now iconic block over James Harden to enable the Spurs to escape with a victory. San Antonio would go on to win the series in the next game.

Ginobili scored 12 points in the game including a right handed highlight dunk in the first half but it was his game saving block that virtually ended the Rockets’ season. The block came from 25 feet away with 0.3 second let on the clock. Prior to that, Manu’s last block of a three point shot came in 2016 while the last time he blocked a three point shot was in 2012. More impressively, it was his first ever block on James Harden. Ginobili couldn’t have picked the better play to be remembered, especially by Harden. 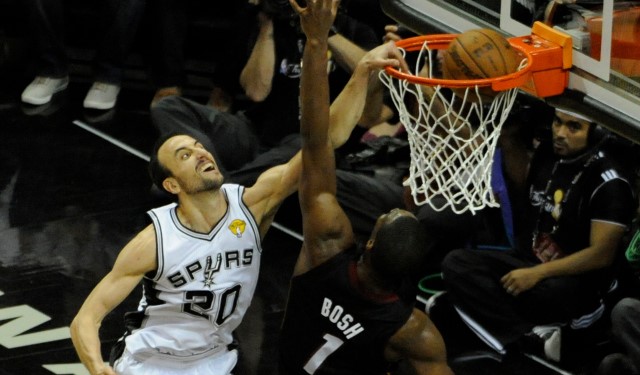 There were plenty of questions on what was left of a 36 year old Manu Ginobili in 2014. But in Game 5 of the 2014 NBA Finals, Ginobili would turn back the hands of time to score a vicious posterizing dunk over Chris Bosh. Sure, the dunk happened in the final three minutes of the 2nd quarter and it was just two of the 17 point margin which the Spurs won over the Heat. But it was Manu’s dunk that ignited the San Antonio Bench.

Ginobili would go on to score 19 points in the game while the Spurs’ bench outscored the Heat’s reserves by 23 points. Take away Manu’s 19 and the Cavs would have won by two. What made the play special was that it happened in the title clinching game for the Spurs. Little did we know at that time that it would be the final of the four titles won by the San Antonio Big 3 of Tim Duncan, Tony Parker and Manu Ginobili. 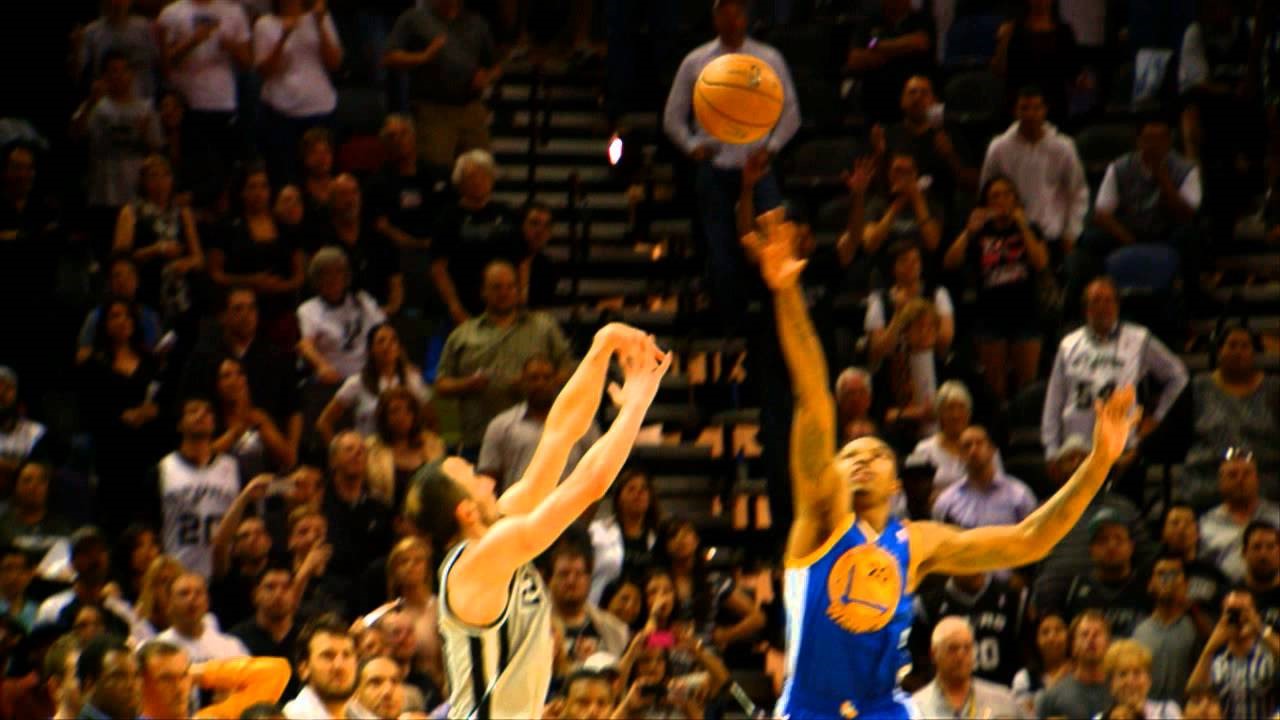 Kent Bazemore will always have nightmares about Manu Ginobili. In Game 1 of the 2013 Western Conference semifinals, Ginobili drilled the game winning three pointer over Bazemore with 1.2 seconds left in double overtime. The Spurs would go on to win the game 129-127 and proceed to win the series 4-2.

Imagine if Manu missed that shot, the series would have been tied at 3-3. Manu shot just 5-20 that night and missed a forced 27 footer with 44 ticks left and the Spurs up by three. But instead of goat, he became the hero in the only game in the series decided by less than 8 points. San Antonio became the first team ever to overcome a 16 point deficit in the final four minutes of a playoff game. Prior to them, teams were 0-392 when playing under that circumstance.

4. Game winner, Game 1 of the 2008 Western Conference First Round 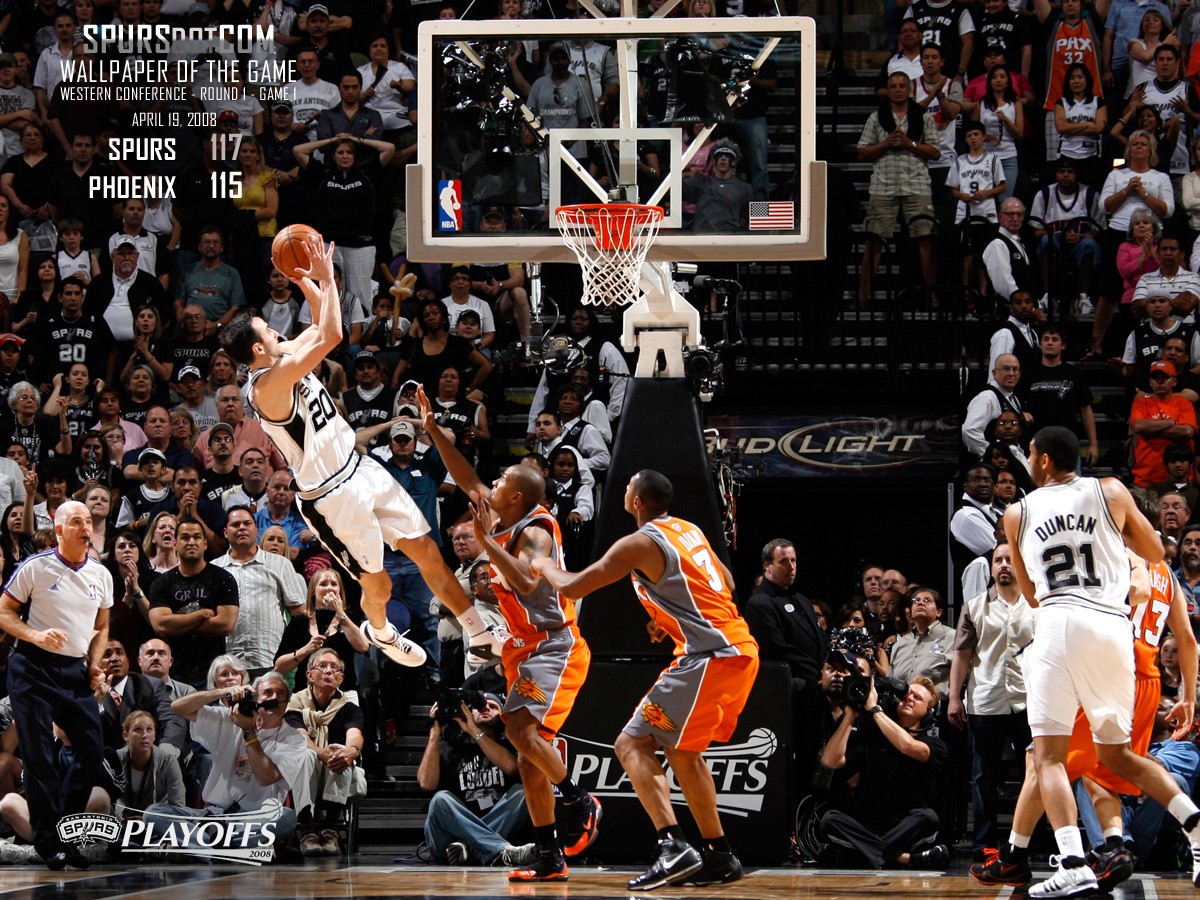 In yet another classic game, Manu Ginobili hit an off balanced layup with 1.8 seconds left in double overtime to lift the San Antonio Spurs to a 117-115 win over the Phoenix Suns in Game 1 of their 2008 Western Conference Playoffs first round series.

It was Tim Duncan who led the Spurs with 40 points and 15 rebounds. The Big Fundamental also sent the game to overtime by hitting a three pointer with three seconds left in extra period. It was Duncan’s first three pointer of the season and it couldn’t have come at a better time. However, it was Ginobili’s spectacular game ending play that won the game for the Spurs. Manu shot a terrible 10-24 from the floor that night but he finished with 24 points including the game winner. 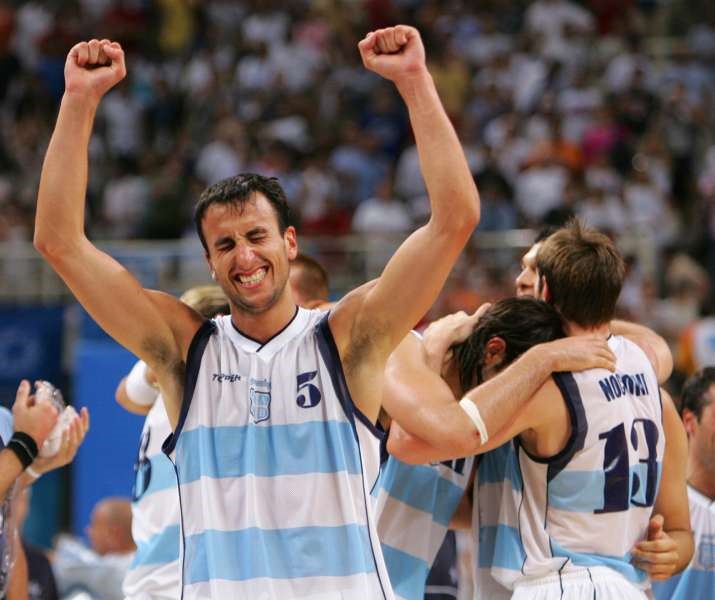 Even before he came to the NBA, Manu was already a clutch performer. In the 2004 Olympic gold medal game, Ginobili made an off-balanced shot to give Argentina an 83-82 win over Serbia and Montenegro. The win gave Argentina its first ever gold medal in Olympic basketball and one of its two gold medals in the 2004 summer games.

Before that, Ginobili completed a three point play to tie the game at 81 apiece. However, Dejan Tomasevic made one of two free throws off a foul from Fabricio Oberto to give the Serbs a one point lead at 82-81 with 3.8 seconds left in the game. Argentina then quickly inbounded and gave the ball to point guard Alejandro Montecchia who found Ginobili near the foul line. With time running out, Manu flipped a desperation shot that gave the Argentinians their greatest basketball achievement.

Aside from these five plays, we also remember Manu Ginobili for several personal accomplishments like winning the NBA’s 6th Man of the Year Award in 2008, His career high 48 point performance against the Phoenix Suns in 2005 where he rallied the Spurs from a 17 point deficit to a 128-123 overtime win, his coming out party versys the Lakers in 2003 where he posted a 33-12-7 statline against Kobe Bryant, his 46 point performance against LeBron James and the Cleveland Cavaliers in 2008 where Manu hit a career high 8 three pointers and yes, who could forget his 29 points in Argentina’s monumental upset of Team USA in the 2004 Olympic semifinals.

These are just some of the highlights of Manu Ginobili’s legendary NBA career. We are surely going to miss him as much as the Spurs will this coming season. But as they say, every hero deserves a great retirement. Happy retirement Manu Ginobili. Thanks for the memories.