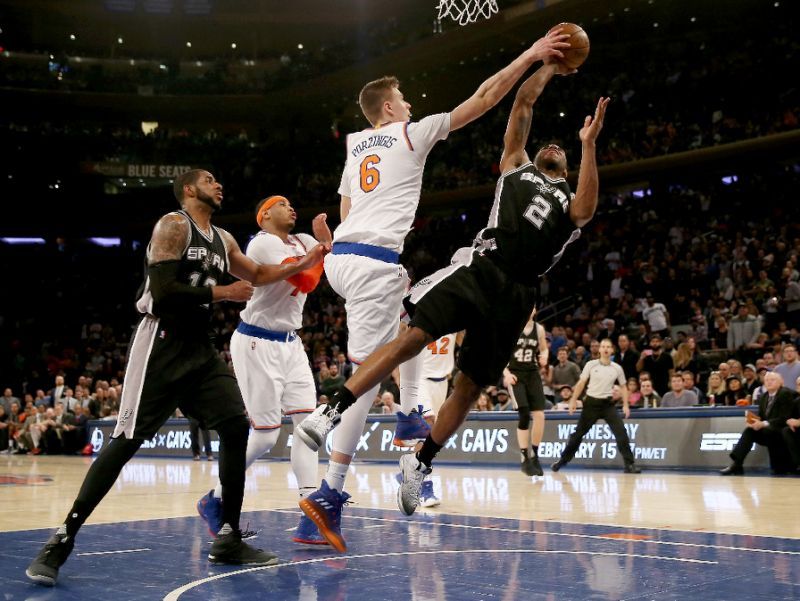 It appears that the San Antonio Spurs are interested in the services of New York Knicks young power forward Kristaps Porzingis. The 7-foot-3 sweet-shooting big man is yet to play a game this season as he is still recuperating from a Torn ACL injury he sustained last year. With Porzingis entering restricted free agency in the summer, it’s not a surprise that other teams are gauging the Knicks’ interest in putting the Latvian center on the trading block.

Kevin O’Connor of The Ringer wrote that according to league sources, the Spurs have been keenly observing how the Knicks will go through the contract extension process with Porzingis. On the other hand, O’Connor also states that New York Daily News’ Stefan Bondy hinted that Porzingis could take a contract extension similar to Philadelphia 76ers All-Star center Joel Embiid.

“The Knicks can give Porzingis a contract worth up to $158.1 million over five years. But last week Stefan Bondy of the New York Daily News cited sources who believe the Knicks will offer Porzingis an incentive-based contract similar to the one that Embiid received. The Sixers guaranteed only $84.2 million of Embiid’s $147.7 million, which set the precedent for a player prone to major injury.”

While the ACL injury was the first major health setback of Porzingis’ career, not many players have returned to their old, dynamic form following a serious injury like that. It makes sense that the Knicks are taking a careful, surefire approach on extending Kristaps’ contract, but it could also be a major turn-off on the side of the 23-year old future All-Star.

However, should Porzingis accept a massive offer sheet from any team in the summer, the Knicks would have no other recourse but to deviate from their original plan and just match any offers from other teams. It’s the reason why teams have been observing how the Knicks-Porzingis contract talks will turn out, as there could be a slight possibility that New York can take a different path and go to the trading market.

Right now, it’s still hard to imagine a scenario where the Spurs could eventually land Porzingis. They have a boatload of massive contracts on the team as aside from DeMar DeRozan and LaMarcus Aldridge, the Spurs still owe double-digit salaries to role players like Patty Mills, Pau Gasol and Rudy Gay.

The thought of the Knicks considering a trade this season is really far off the road, so if the Spurs could convince Porzingis to play in Texas (if New York again fails to land a big-time name in free agency), both teams could work a sign-and-trade deal in the offseason. A trade that would center around Aldridge and possibly Lonnie Walker IV, the Spurs’ intriguing recent draft pick, could be a negotiation starter.

Bondy also noted that Nets general manager Sean Marks has been very high on the possibility of Porzingis playing for the Knicks’ city rivals. Brooklyn would definitely put up an offer sheet for Kristaps, but it would be hard to be optimistic on a scenario where the Knicks just let go of their star player in restricted free agency.

Additionally, the Knicks’ future actually packs more promise than Brooklyn’s. With the high possibility of Kevin Durant going to New York in the summer, rookie Kevin Knox’s surprisingly quick improvement over the season, and a surefire chance that the team will land in the Top 5 of this year’s draft, Porzingis has the opportunity to be part of a stronger, revamped Knicks next season.