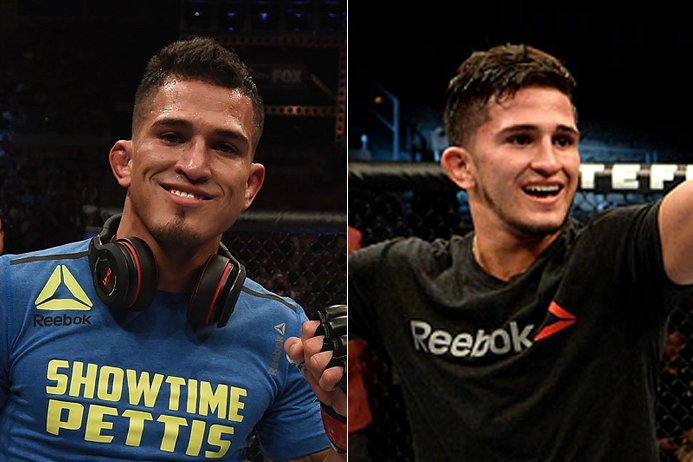 Sergio Pettis has always fought in the shadow of his more illustrious big brother. Now, he is little brother no more.

Pettis defeated fellow rising contender Brandon Moreno via unanimous decision at the main event of UFC Fight Night 114 in Mexico City to announce his arrival as a legitimate title threat.

Sergio Pettis turned pro at the age of 18. After nine victories which included him winning the RFA Flyweight championship and the NAFC bantamweight title, he joined his brother Anthony in the UFC. Less than a month after Sergio won his UFC debut at UFC 167, big brother Anthony submitted Gilbert Melendez to retain the UFC lightweight title at UFC 181.

“I came into the UFC a little kid. I felt small, man. I felt like a little kid – Anthony’s little brother. I had to play up the hype. But now I feel like I’ve broke out of it. I’m making my way to becoming myself, becoming Sergio Pettis. And I’m slowly but surely doing that.”

As a newcomer, Sergio couldn’t escape the comparison. He looked like Anthony and fought a little like his big brother. Being the younger brother of a UFC champion put a lot of expectations on Sergio Pettis and for a time, he had a tough time living up to it.

After winning his UFC debut, Sergio Pettis would go 2-2 in his next four bouts, losing twice by stoppage. Since then though and prior to UFC Fight Night 114, Sergio won three fights in a row including two against former UFC flyweight title contenders Chris Cariaso and John Moraga. Sergio was now #6 in the UFC’s flyweight rankings. Then came the big opportunity to headline his first UFC event against an equally exciting up and comer with a great story.

Brandon Moreno was earning a little over $70 fighting in low-level MMA circuits in Tijuana, Mexico. But after alternating wins and losses in his first six professional bouts, the “Assassin Baby” won 11 fights in a row. Moreno’s meteoric rise to the UFC flyweight top 10 earned him his first headliner in his native Mexico.

Moreno’s first foray in the UFC was a failure after suffering a submission loss to Alexandre Pantoja in the opening round of the TUF:Tournament of Champions last year. But he has since proven his critics wrong by racking up three straight wins in the UFC, including submission wins over Top 10 fighters Luis Smolka and Dustin Ortiz.

Pettis’ big opportunity to break out was also Moreno’s chance to become a title contender. Moreno acknowledged that before fight night:

“If the planets align, I think the winner here should fight for the title. Joseph [Benavidez] is injured, Henry [Cejudo] has a fight with Wilson Reis, and the both of them recently fought for the title and lost. So yeah, I think this fight aims to be a title eliminator bout.”

Pettis versus Moreno was a stylistic match-up. Ten of Moreno’s 14 wins were by submission while Pettis went the distance in 9 of his 15 victories. For Moreno to win, he had to take the fight to the ground early and avoid going to the scorecards:

“This is the first time in my career I’m going into a five-round fight. To be honest, I don’t want it to go the distance. I want the result to be in my hands, not the judges.”

It looked just like that early on. Moreno almost immediately took Pettis to the mat and secured a triangle body lock. On the ground, the Mexican rained down punches and went for submission chokes. It was one-sided that Moreno probably won that round 10-8.

“I definitely had to face adversity,” Pettis said. “He put me in a dangerous situation. I stayed calm and knew I had four more rounds.”

Pettis stayed calm and found his striking rhythm as the fight went on. He dominated the next three rounds with precision striking and excellent use of space. Moreno scored another takedown in round five but Pettis defended it well, landed a significant upkick and got back to his feet. After five rounds, the judges gave Pettis the nod at 49-46, 48-46 and 48-46. It was Pettis’ sixth win in seven fights and more importantly it put him in a position where he could challenge for the belt.

Most non-title fight main event winners usually call out the champion during the post fight octagon interviews, demanding for a title shot. Pettis did not. But it wasn’t necessarily because he didn’t think he deserved one. Sergio Pettis feels that he still has unfinished business with another fighter:

“I feel like me and Cejudo should go at it again.”

Pettis was referring to Olympic wrestling gold medalist Henry Cejudo who pulled out of their UFC 211 fight with a hand injury two days before fight night. Pettis was all set to go and do business when the deflating news reached him:

“Two days before the weigh-ins – about four pounds away from making weight – I finish my last workout, and I get the call from my manager that Cejudo pulled out. So, it was definitely a frustrating moment. I was ready to fight. (He’s) a big name, No. 3 in the division, and it would’ve shot me up (the rankings).”

Indeed a win over Henry Cejudo would’ve pushed him higher in the rankings. That’s the reason why he’s still salivating for that fight. Still, a win over the red hot Brandon Moreno served notice. Sergio Pettis has arrived. He is Showtime’s little brother no more.