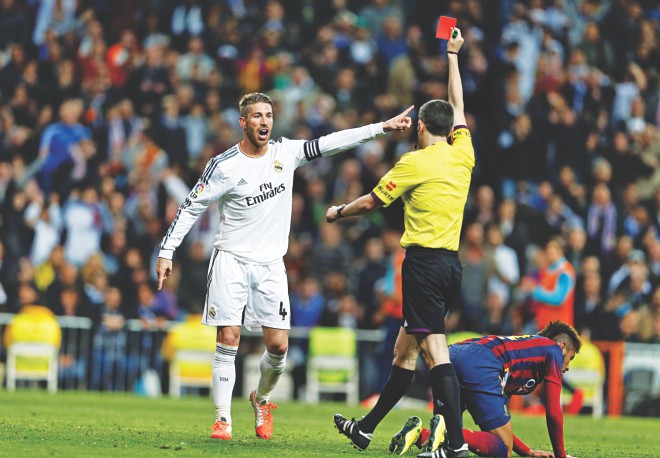 It’s the 92nd minute of the Match between Deportivo La Coruna and Real Madrid. The Galacticos, Real Madrid were leading 3-0. Spanish World Cup Winner and Real Madrid Captain Sergio Ramos decides to engage in an aerial duel with Borja Valle, where he elbows Valle resulting in a second yellow card, ultimately getting him sent off.

Many fans fathom to understand the mind of Sergio Ramos. One of the most gifted defenders of our generations, but still decides to get involved in unnecessary incidents on and off the ball? For what possible reason would Ramos engage in a dangerous challenge, knowingly on a yellow card with the team 3-0 up with just one more minute to go into the game?

That was the 31 year old’s 18th La Liga card, giving him the unpopular title of the most red-carded player in La Liga history, equaling Xavi Aguado and Pablo Alfaro. It’s an astonishing record for Ramos to hold, especially considering that he is well known for being sent off. Surely, after the 10th or 11th red card of his career he must have realized there is a problem and the coaching staff at least looking to assist the player in a more disciplined line of play.

Ramos commented on the red card after the game:

“"When you win many titles, the rivals are full of envy towards you,”.

He seems to think that the red card was unwarranted and that Valle was exaggerating the extent of the injury. In may be the case, but he has 17 other red cards which undeniably could not all have been incorrectly awarded.

He has received 5 red cards in El Classico. To demonstrate the crazy nature of Ramos: 18 September 2005 he received a red card (two yellow cards) versus Espanyol in La Liga – which was his first sending off for Real Madrid. Just ten days later, he gets himself sent off against OIympiakos in the Champions League. Just about a month later, he is yet again sent off versus Real Sociedad in La Liga. He hardly got to play any games during those times because of how much he was sent off and it seems still a more experienced Ramos has the same habits.

A player of polar opposites

Sergio Ramos is a player of polar opposites. He is a charismatic captain and player, with a killer instinct for scoring important goals. He has scored in the World Cup for Spain, in the Champions League Finals for Real Madrid and often pops up with all important stoppage time winners for his club as well in La Liga. On the other hand, Ramos also does things which one might consider sinister. He exaggerated the extent of the tackle from Juan Cuadrado in the 2016/2017 Champions League Finals against Juventus to get him sent off. He also faked a head injury of handling the ball against Espanyol. It’s no wonder football neutrals are quite confused about how to feel about him. It should also be mentioned that there does not generally seem to be malicious intent behind his doings, but rather just pure clumsiness.

He also commented in the post-match that “He prefers English football referees because they are more lenient”. That may be the case, but he has been playing Spanish football all his life so it is not necessarily a valid excuse. On the other hand, Sergio Ramos seems more composed playing for the Spanish National side, having been sent off only once in 143 appearances. In total, Sergio Ramos red cards tallies up to 24. That’s a record of 18 in La Liga, 3 times in the UEFA Champions League, 1 in the World cup and 2 in Copa Del Rey.

It’s likely that not much will change in the way Ramos approaches the game. He is now 31 and will probably not do too much to disturb the way he plays. Zidane, the Real Madrid coach will probably also not do much to change Ramos’ style. Sergio Ramos is just a naturally aggressive and flowing player, and asking him to play more subdued will likely disturb with his rhythm. Well, that’s a record that he has broken, albeit an unpopular one. It wouldn’t be surprising if he goes on to further extend that record in the coming season.